Neil Gaiman: The Liveblog by Paul B. '11

"This is a land of fire and dreams."

As I mentioned earlier, Neil Gaiman is coming to MIT! The lecture he’s giving was even featured on the MIT homepage for today, which is how you know something is Really Important: 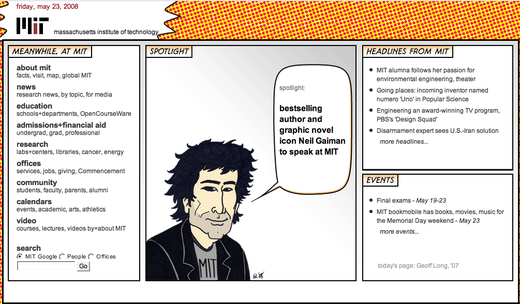 In terms of my personal excitement level, I still think Neil wins. (No offense to the guv’nor, of course.) Of course, it also helps that this particular lecture is being given after my finals are done and not during the actual term, but that’s just the way it goes.

Originally, I just planned on showing up to the lecture and maybe taking some pictures. About fifteen minutes ago, though, I realized that I also happened to have my laptop with me…and there was wireless in the auditorium…and, well, you see where it’s going. Now it’s 6:55, and I’m currently sitting in Kresge, ready to liveblog! There’s just five minutes to go until Neil arrives, so stay tuned!

7:00 exactly – The lights darken! An expectant hush fills Kresge, then people quickly start whispering. I contemplate yelling “LSC!” but realize that would be kind of rude at this juncture, and refrain.

7:01 – The darkness continues. I think people were expecting Neil to be here by now. There is A few people start clapping (widely known throughout the world as a surefire method to summon missing speakers) but are quickly hushed and shamed by the rest of the audience, who are much more respectful. (I am glad I did not yell.)

7:02 – Apparently no flash photography is permitted. This rule is stated at almost the exact moment I was about to take a flash photo. (Woah, that was close.)

7:10 – The Flash, Hawkman, Green Lantern – the Justice League! “Superheroes hang out together.” Prof. Jenkins talks about how he used to be the Green Lantern when he was re-enacting these superhero comics with his childhood friends. (All together now: “Aw.”)

7:16 – More discussion about the Justice League, and the profound impact Schwartz had on the comic industry (and beyond). “It seems appropriate that here at MIT, we honor his legacy.”

7:18 – “If ever there is a speaker at MIT, who needs no introduction, it is Neil Gaiman….I think you’ve heard enough from this stuff old guy, and I think it’s time to turn the floor over to Neil Gaiman.” GIGANTIC APPLAUSE.

7:20 – Neil speaks. “Thank you all for coming. I thought I would begin by reading something…by somebody else! Which is not something I get to do very often.” It’s a speech written on the occasion of Schwartz’s death: “We loved Julie the way we loved anyone we’ve known since we were small.”

“Right. So this is the lecture. There about 1200 of us here. And at least one of us was still sitting in his hotel room at 4:45, still scribbling this.”

7:30 – Minor crisis, my camera keeps beeping when I take photos. I try to turn this off, and though I succeed, the process itself creates a lot of beeping. This annoys the person in front of me, who decides to turn around and give me a nasty look. =/ Whoever you are, sorry dude, and please realize I wasn’t actually trying to be inconsiderate, I would like a beep-free lecture just as much as you.

7:34 – I am repeatedly astounded by the amount of stuff Neil is cramming into this lecture. It’s very hard to process, especially since everyone (myself included) keeps taking breaks to applaud.

7:35 – …um. I really don’t think I should blog exactly what this part is about. Oh my this is awkward. And hilarious. And utterly Neil.

7:39 – Okay. This is family friendly again. Genre is defined, according to Neil, by the events whose absence would make you feel cheated – and I think this is the fundamental point that he’s been driving at this entire time. In his own words, genre “gives you something to play to, and to play against.”

(If I am doing a bad job at making this sound interesting, the fault is all mine. This is actually pretty fascinating, and the audience – myself included – loves it.

7:46 – Discussing prose – how the reader and the writer, in a sense, collaborate with each other, in the sense that a novel is only words: and because they are only words, “no readers will ever read the same book, because you guys, as readers, are building…giving the characters voices, painting the sky.”

7:49 – Comics, on the other hand, give both pictures and words; “the places that the reader does all the work is between the panels.”

7:50 – We’re talking about media now, as well as genre. “These are all different ways of getting ideas from one head to another.” Comics and graphic novels are media, not genres, despite consistent confusion.

7:54 – Okay, I have about 6% battery power left and there’s not an AC outlet in sight – where’s wireless power when you need it?

7:56 – “Books, or comics, change mind – and they do it because they make you imagine, and the act of imagining is the most powerful thing there is.” Everything had to be imagined at some point – everything, from powers, as Neil demonstrated with his own water, “What if? It doesn’t have to be like this. It can be different. Julie Schwartz helped make the world where it is today. And one way he did it is by encouraging us to daydream. Thank you.”

Once again, applause – Neil looks slightly embarrassed – and now we’re moving into the Q&A session between Neil and Prof. Jenkins. My computer’s about to run out of juice, but I’ll come back later and clean this entry up with photos, more thoughts, and all the rest. Until then!

9 responses to “Neil Gaiman: The Liveblog”