Once a year, a different US city hosts the annual National Poetry Slam, a week-long, no-holds-barred celebration of poetry that’s part competition, part exhibition, and 100% inspirational. This time around, both Boston and Cambridge invited 76 teams of spoken word artists to engage the stage and compete to be the year’s top poets.

MIT was even lucky to host one event at the Stata Center, which featured – you guessed it – a nerd slam, and some Harry Potter versus Buffy the Vampire Slayer poetry. (You can tell these aren’t my photos because of how awesome they look. Full credit to Richard Beaubien and Marshall Goff who helped photograph the slam!) 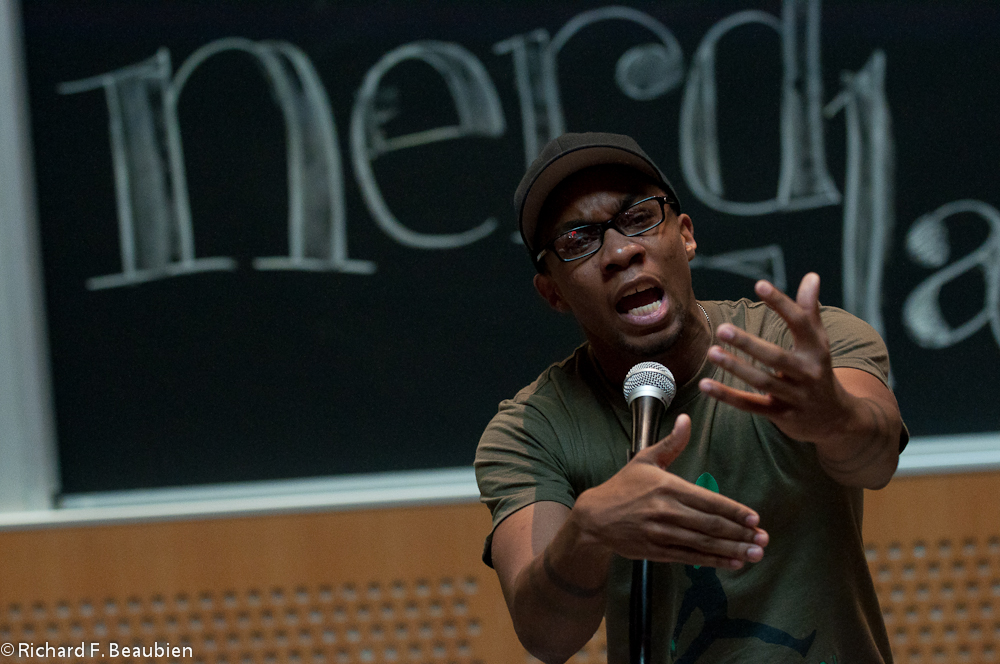 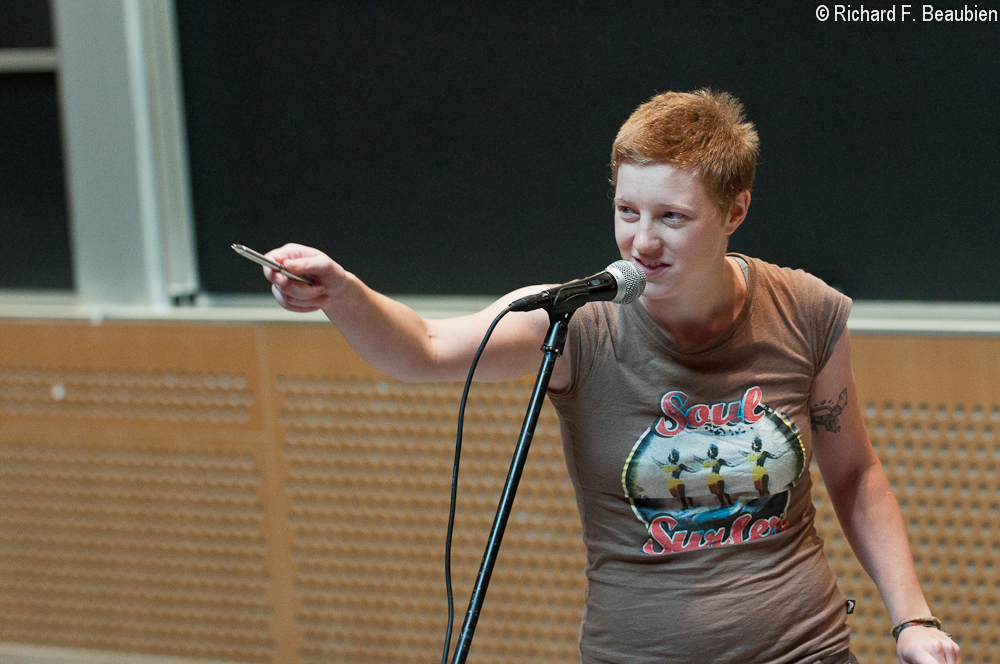 So what is a poetry slam, anyway? It’s a 25 year old movement of spoken word, and one that gradually became distinguished from its roots. There’s only a handful of rules behind it – things like scoring rules, time limits per piece, and excluding instruments or props – but beyond that, there’s no boundaries.

So in short, a poetry slam is what happens when many unshackled, unfiltered poets are let loose on the stage, one after the other. Sometimes, they praise and uplift; other times, they condemn and warn. In my experience, they’ve been some of the greatest, most animated, and most frank performers, and I’d highly recommend that you go see at least one slam or three (or many more), or an open mic (or even both!) in your lifetime. 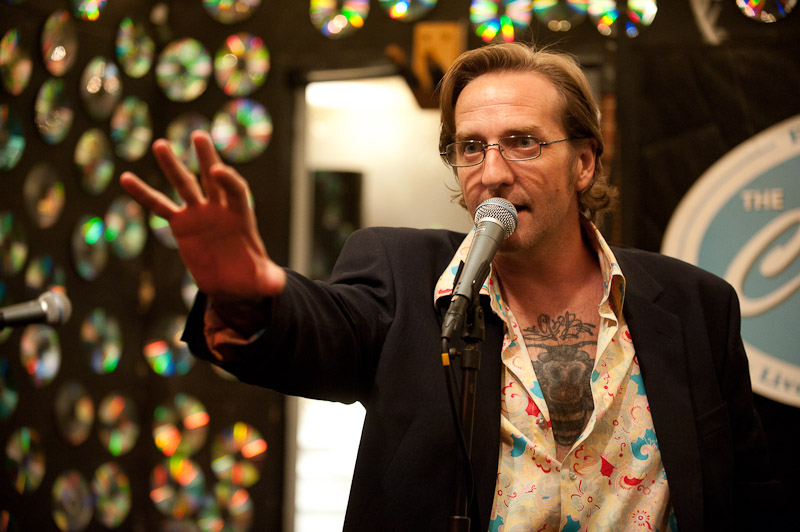 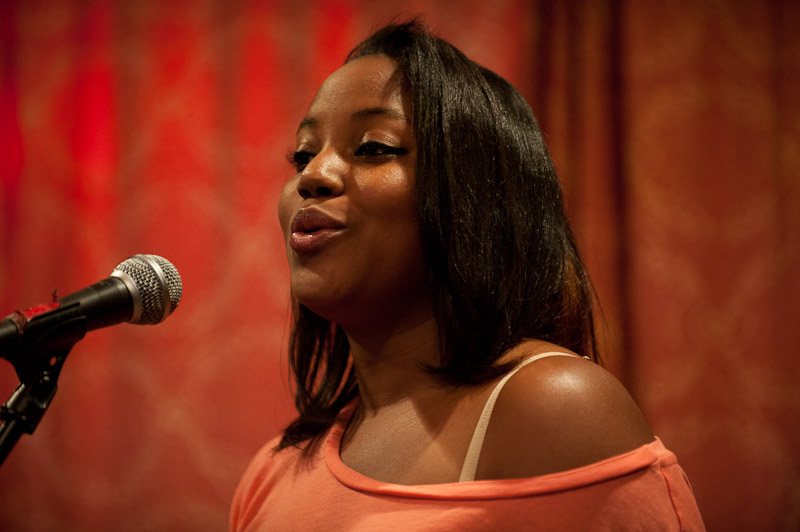 They’ve also been some pretty great teachers; even the very concept of slam reminded me of a few things that I should remember while at MIT. For those of you who are incoming freshmen, I invite you to read some of these pointers. They’ll set you up well for your next four years at MIT.

This is a safe place where everyone has a story.

Each poet in a poetry slam takes a huge risk in sharing their secrets on-stage to their partners in rhyme and to their fans in the audience. The topics they cover range from recovering from addiction or handling a divorce, to the joys of reading, and every harrowing, enriching, rejuvenating, gut-wrenching, breathtaking, and inspirational experience in between. Yet despite how wide open they leave themselves to judgment, they keep coming back, because as emcees at many slam events said last week, “Slam is a safe place.”

In some important ways, so is MIT. If you don’t end up feeling that way, then reach out to people – you will find someone.

Now, it’s good to stay in contact with your close friends from your high school years, but the truth is you’ll be seeing the people on campus more often. So to keep yourself from feeling like jettisoned cargo from an airplane descending in free-fall, go connect with new friends. Do stuff. Talk. And don’t always feel like you need to have a p-set in hand when you do, either! Enforce a separation of work and play, and know whom you can count on to keep your mind where it needs to be. Then, once you’ve met a few people you can talk to, see how well you can get to know them.

In one notable example, I started to click with my CPW host, who hails from Zimbabwe, in the first three days that I met him in person. In fact, if you went to CPW, getting back in touch with your host is a good way to start. They’ve got at least one whole year on you in terms of experience, and they’d be happy to talk about the ins and outs of MIT culture, help you dominate your GIRs, or just hang out and talk about anything.

After just the first year, I have at least one or two friends who are always down for burrito breaks; another who loves crepes, musicals, and Spanish culture – which I’ve been meaning to delve into; and another who’s an avid drummer and dancer, with whom I hope to one day build a drum set at the hobby shop – as soon as we learn some of the needed acoustic theory over the coming years. Of course, I’ve also met a few people in the city (and at MIT) who enjoy slam poetry.

Small gestures like that can help weave you into the spot where you’ll feel you belong here at MIT.

Be committed and be yourself.

You can try to seem convincing, but it’s a lot easier to simply channel yourself through what you do. It’s a guiding principle among poets at poetry slams, and they only diverge from it to assume a persona and tell the story of that “person.” Even then, though, they’ve done their homework and tried to immerse themselves in the character.

David duKor-Jackson wrote an excellent post about being, rather than seeming, so I won’t go into too much detail. But I will share a dilemma I had.

As early as when I was filling out my application for MIT, I was dead set on majoring in Course 9, and that part never really changed. See, I tend to listen to other people’s stories so that I can try to tease out a loose order to their actions – there’s a mutual dynamic unfolding between behavior, the brain, and the environment, and it still throws people surprises each and every day. But when I took 5.12, I ended up taking a liking to chemistry, and I even thought about declaring Course 10-C as a major.

There were many reasons to give it a try – having a high-paying job after MIT was one of them – but I thought about my passions up until that point. Was I really that into chemistry? Like, obsessed with it? I mean, I like the Chemistry Cat meme and all, but enough to give up studying behavior and the brain?

10-C is a flexible enough that you can juggle it and a second major at the same time, but I wouldn’t be able to pursue philosophy if I did. That’s what gave me pause: if there’s anything that I really want to study while I still can, it’s the science of thought, of logic, of ethics, of the nature of existence – all of those lofty questions that keep my brain churning every night. I’d feel bad turning my back on that just to make some money – and I’d be betting that maybe, maybe I’d end up liking chemical engineering.

And that’s what decided it for me. I thought it would be better to hone my intelligence in one or two fields that I know I would love and pour my efforts into, rather than trying to do too many different things and doing all of them half-heartedly.

Your work is important…

This one should be self-explanatory. You’re going to MIT. Work is tough here, but rewarding – you might use it to do something cool like create a possible cure for any viral infection.

…But never mind the score.

And by that, I mean your GPA. (Not that you’ll need to worry about it in the first semester, which is pass/no record.)

It’s a twisted exercise to ultimately grade a person on one’s mastery of the material, just as five randomly-selected judges at a poetry slam must grade the poems that they hear. It’s hard to quantify effort, let alone the richness of one’s experiences, and it ends up missing so many things and factors that went into it.

Poetry slams only have scores because a competition needs some sort of criteria to move people forward, but the top prizes don’t just go to the teams that place in the top four slots. They really go to everyone who’s involved – the people in the audience, who all heard and enjoyed the poetry; the competing poets, who wrote something that resonated with them and then imparted their art to others; the volunteers, who had a hand in making it all come together.

I believe an education functions in much the same way. It’s not just the tests you get back, with grades that you love or hate. It’s the communities you become a part of, the experiences you dive into, the professors who, no matter what, invest a bit of themselves into your growth and success.

In fact, there’s a refrain among emcees of poetry slams that follows the announcement of the scores: “Never mind the score – what did you think of the poetry?” The response is always applause from everyone. There’s no reason not to feel the same way about your own work and effort. So no matter whether your next test comes back with an A, a B, or even a D, give yourself a hand.

It’s the MIT experience, and you’ll get to live it out.

4 responses to “Never Mind The Score”