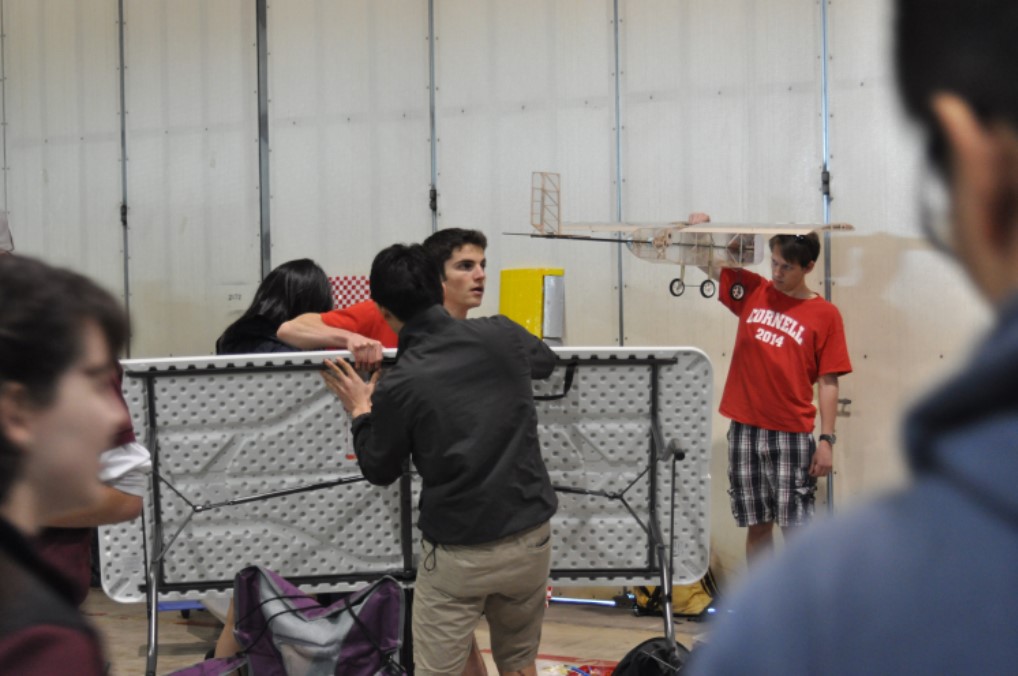 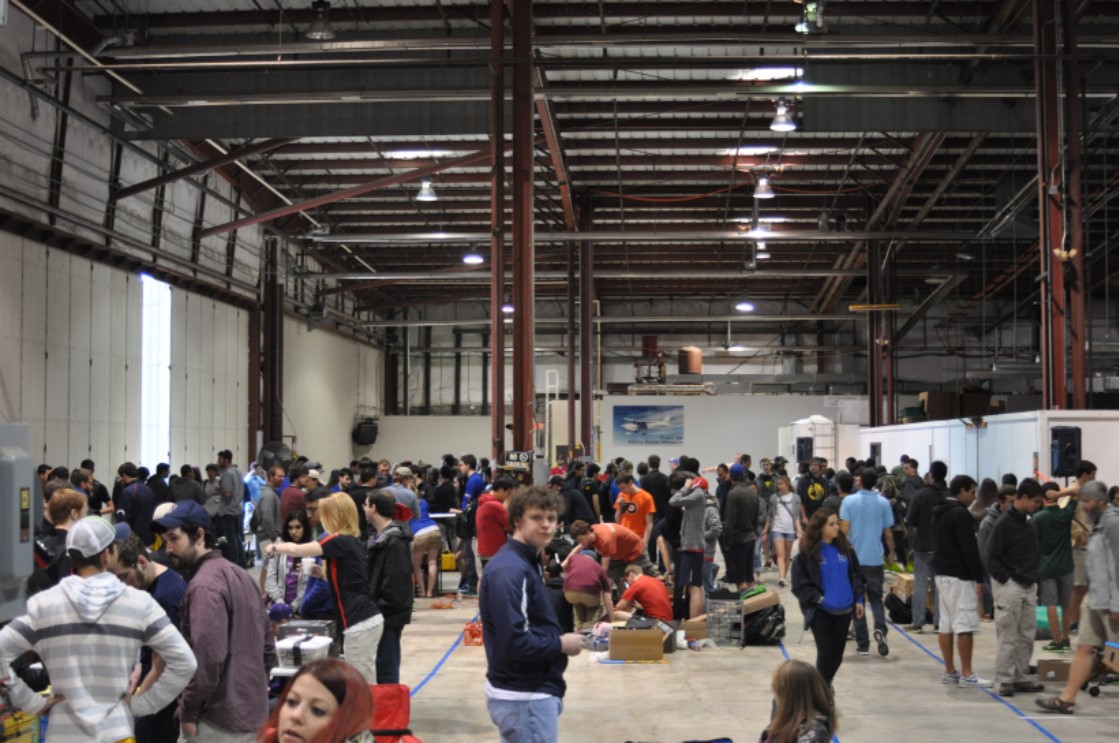 With the airplanes come airplane geeks. As everyone paraded their airplane into the hangar, it was common to overhear good-natured conversations about preferred manufacturing processes, questions about materials, and compliments about everything from the landing gear design to the paint job. Sometimes people get enthusiastic and want to touch each others’ airplanes. This is kind of uncomfortable for everyone involved–imagine if you spent six months carefully crafting the perfect airplane and someone puts their grubby hands all over it. Not cool, especially for an airplane as special as our Corn Dog (so named for its Kevlar-yellow fuselage). 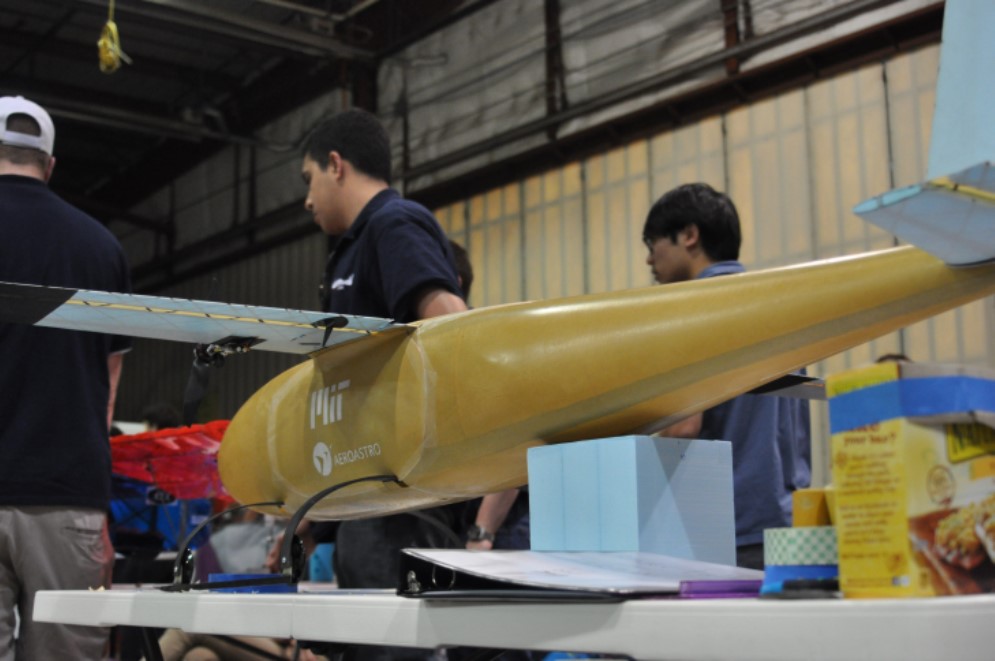 We’re in Kansas for the Design/Build/Fly competition, and after unpacking our mobile laboratory and assembling our plane last night, we caught a few hours of sleep and crawled out of bed this morning at 6 AM. One group loaded up suitcases and headed off to the competition site, while the other took our airplane out to an RC field for some last-minute flight testing. 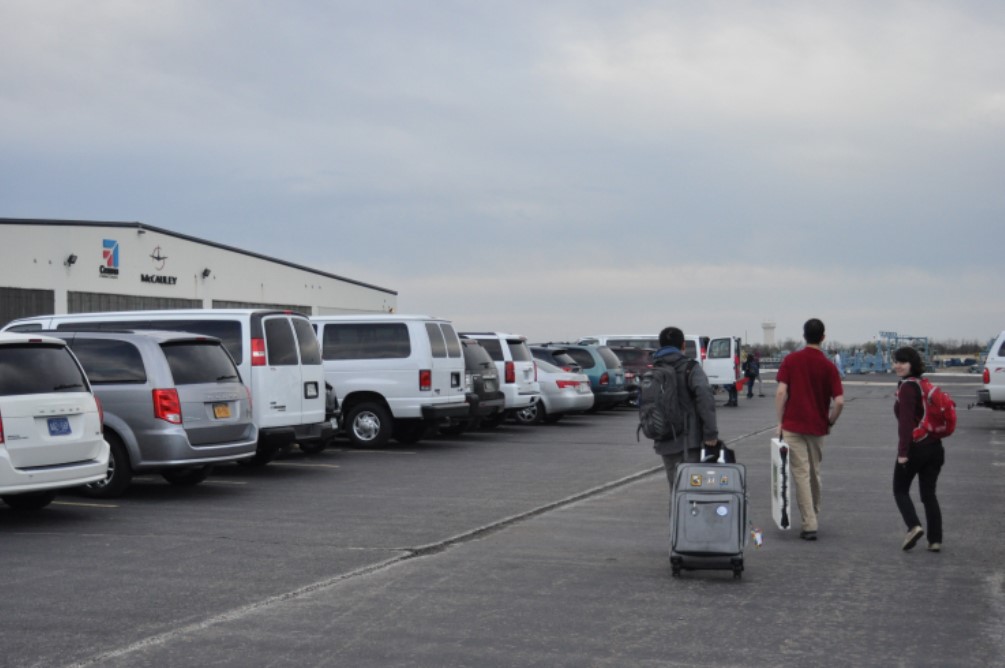 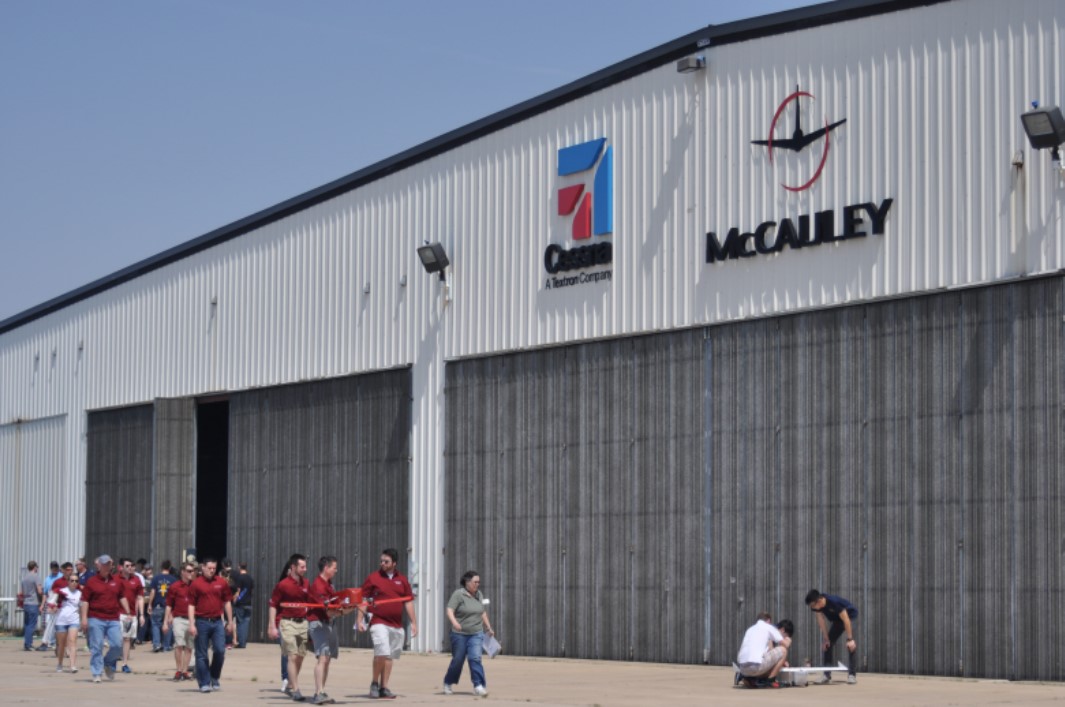 At the competition site, every team was given a taped-off area about 7 feet square to set up shop. While we unpacked all our suitcases and toolboxes, the teams around us sneaked awkward glances at our area and our conspicuous lack of an airplane. “The MIT team looks like they’re all freshmen,” muttered one of our neighbors. Meanwhile, we muttered to each other about the demographic makeup of the competition. “I forgot how much of a sausagefest DBF is,” said one of our upperclassmen. “I think we’re the only team that has more girls than guys.” She had a point–the MIT team is in the extreme minority, if not unique, for having a female captain, and we were also one of the few teams not comprised largely of white males. Nevertheless, there was still a fair amount of diversity; one of our neighbors was a good-natured team from Tel Aviv that we quickly befriended, and across the room, a team from Hong Kong and a team from the United Arab Emirates hung their flags next to each other on the wall. 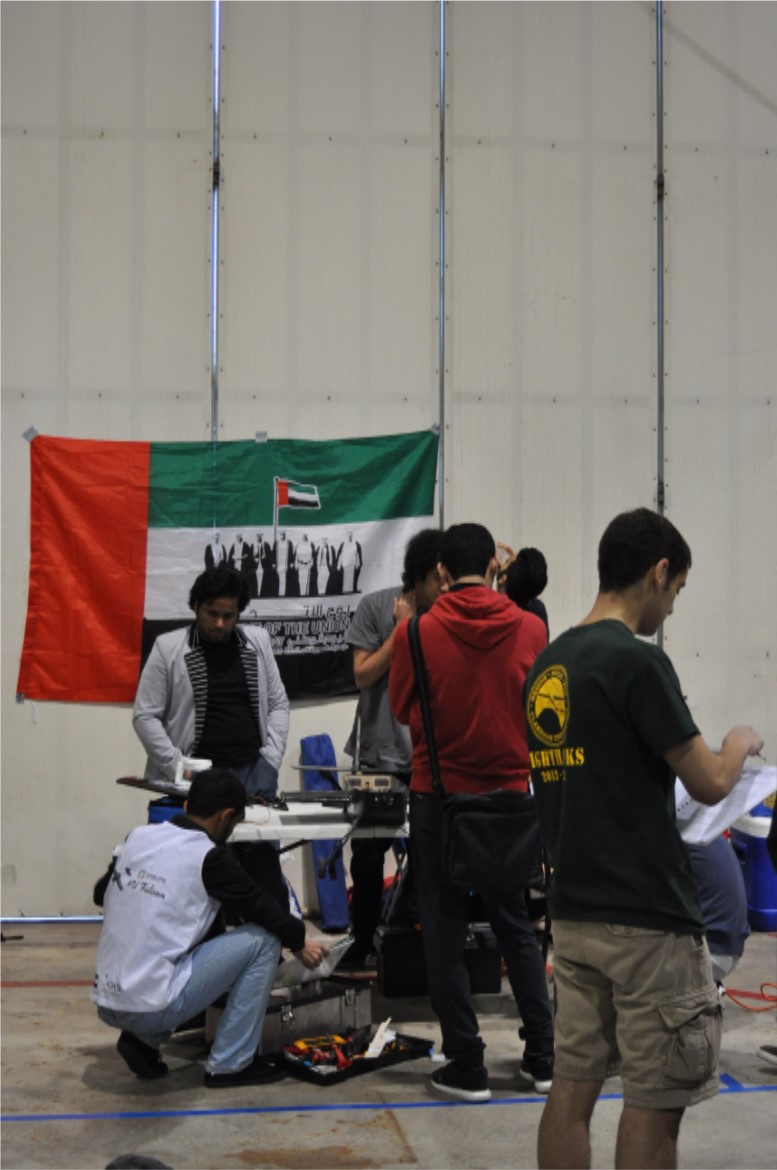 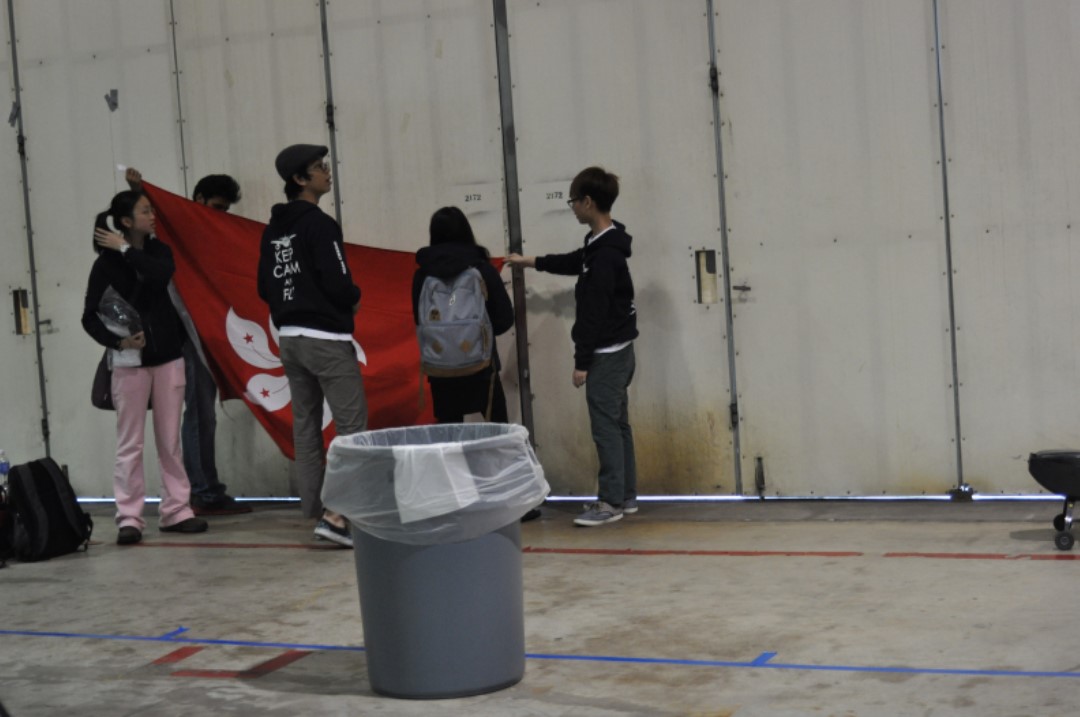 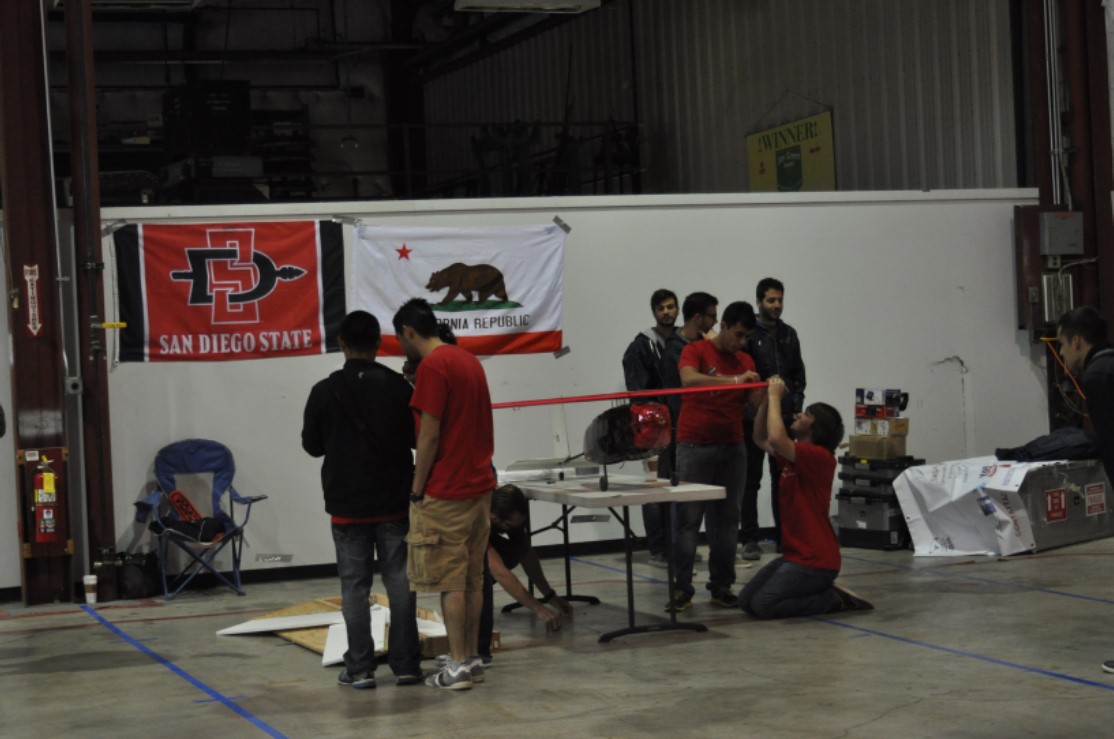 Meanwhile, our flight testing team had discovered that our airplane’s center of gravity was too far forward. This meant delays. The first part of the competition is a “tech inspection,” where the airplane is inspected on the ground to make sure everything is built to specifications and won’t explode on takeoff. We were nineteenth in line, and as team 17 was called our flight testing team finally arrived with our plane. We ran into the parking lot to finish final assembly and march our plane into the hangar just in time for tech inspection. 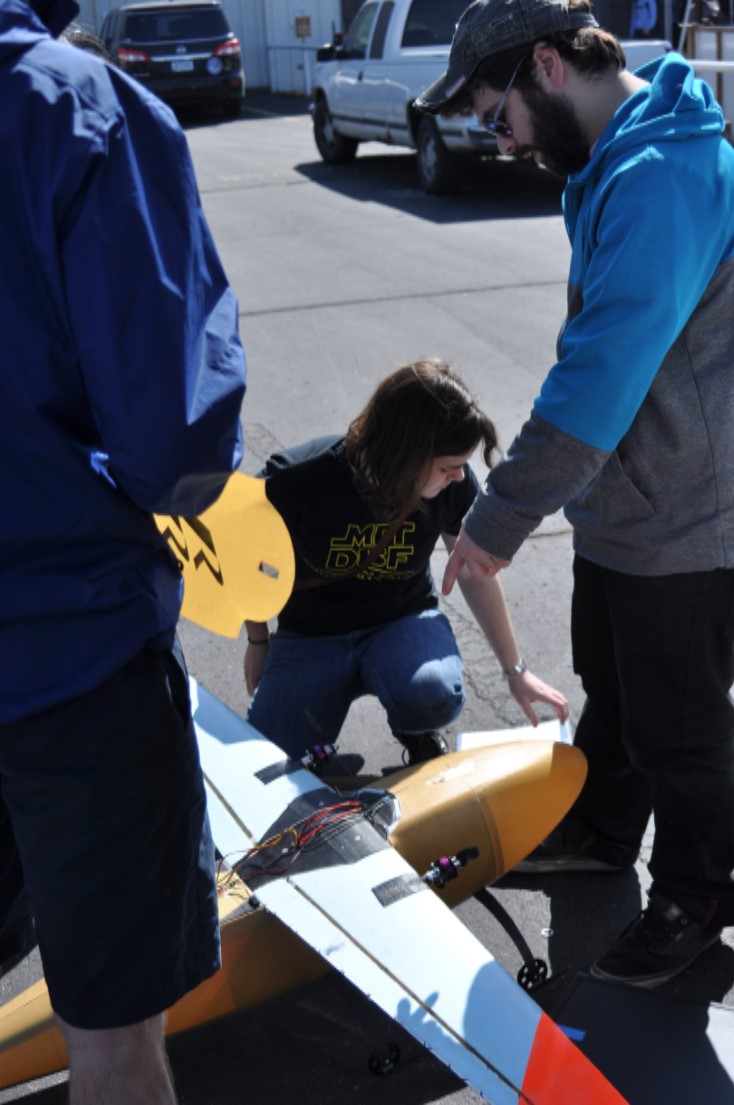 Final assembly in the parking lot 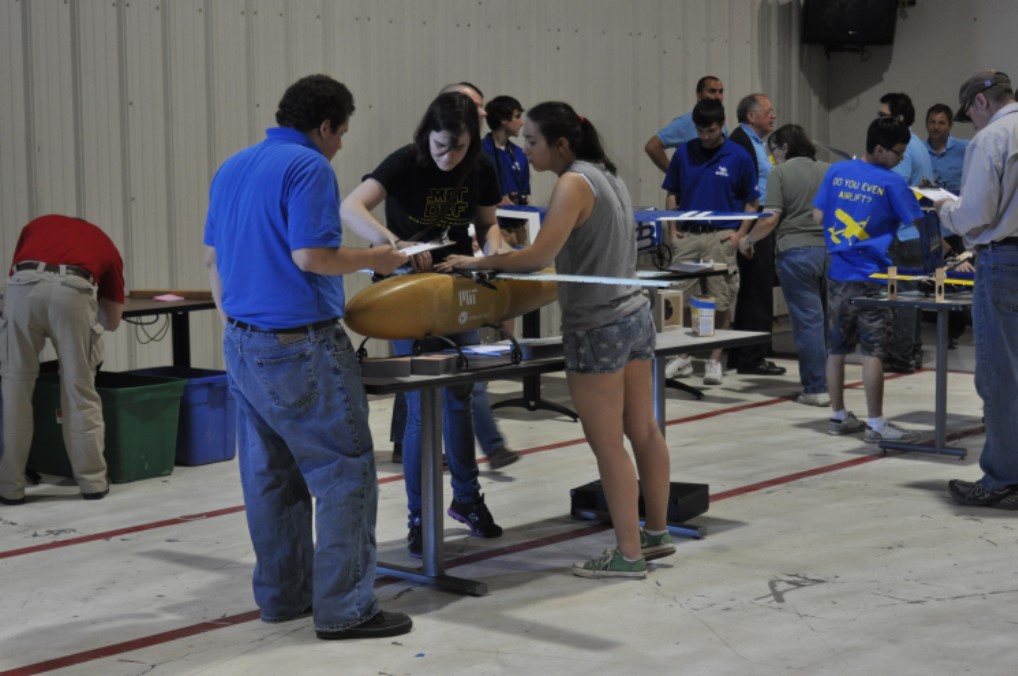 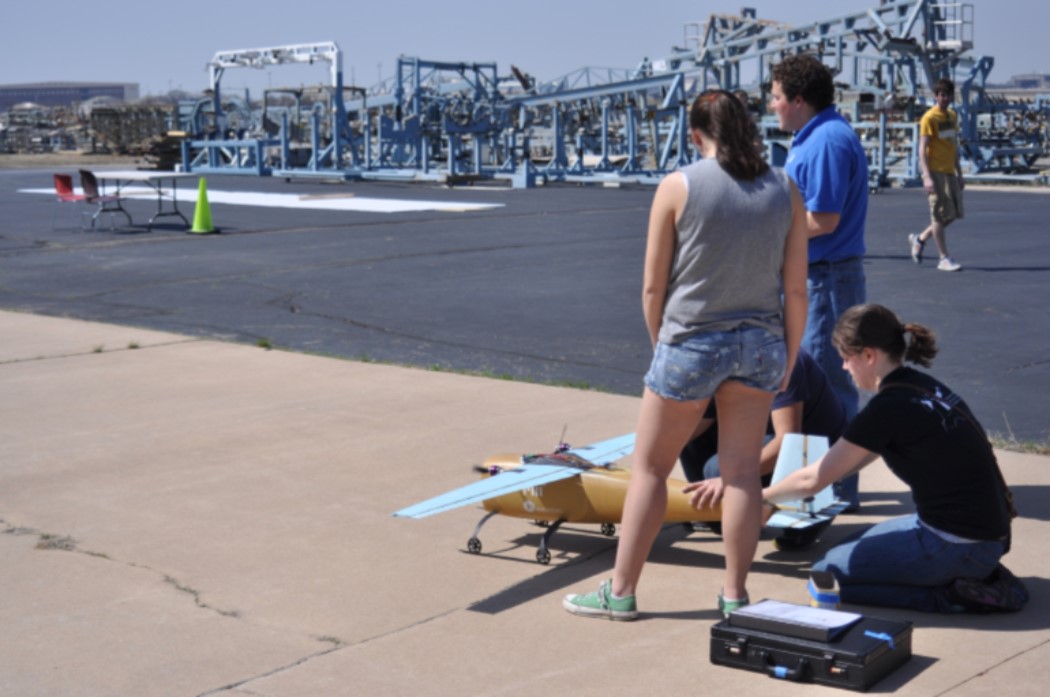 Tech inspection entailed a detailed checklist for our plane electronics, checking that the payload fit into the payload bay (left), and testing the radio connection and controls (right). After a nerve-wracking twenty minutes, we ticked all the boxes and carried Corn Dog lovingly to our workspace. We then headed out to Sonic (a drive-in burger restaurant) for lunch, where I ate a chicken sandwich and possibly the best limeade I’ve ever had in my life. 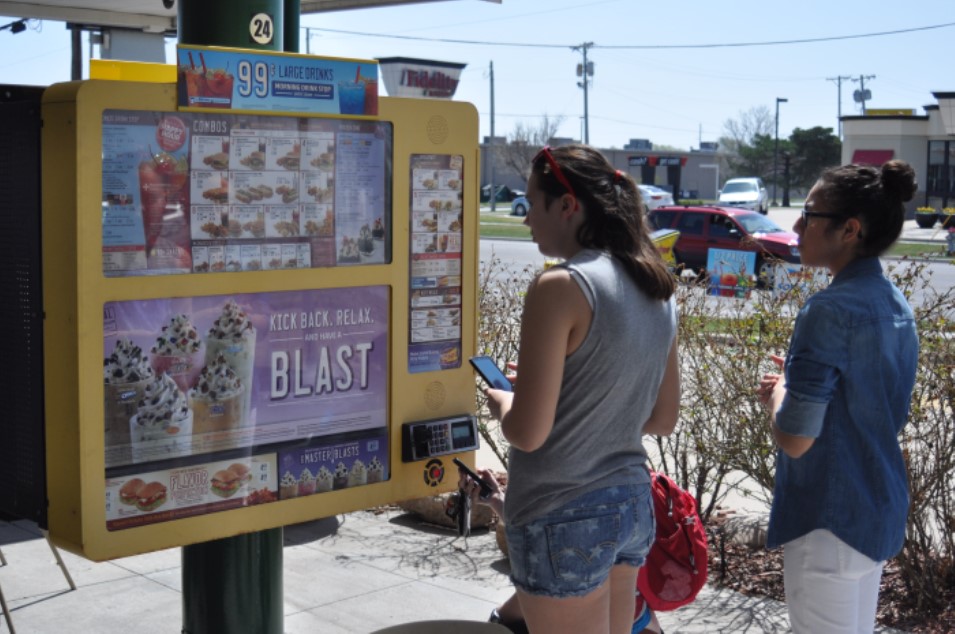 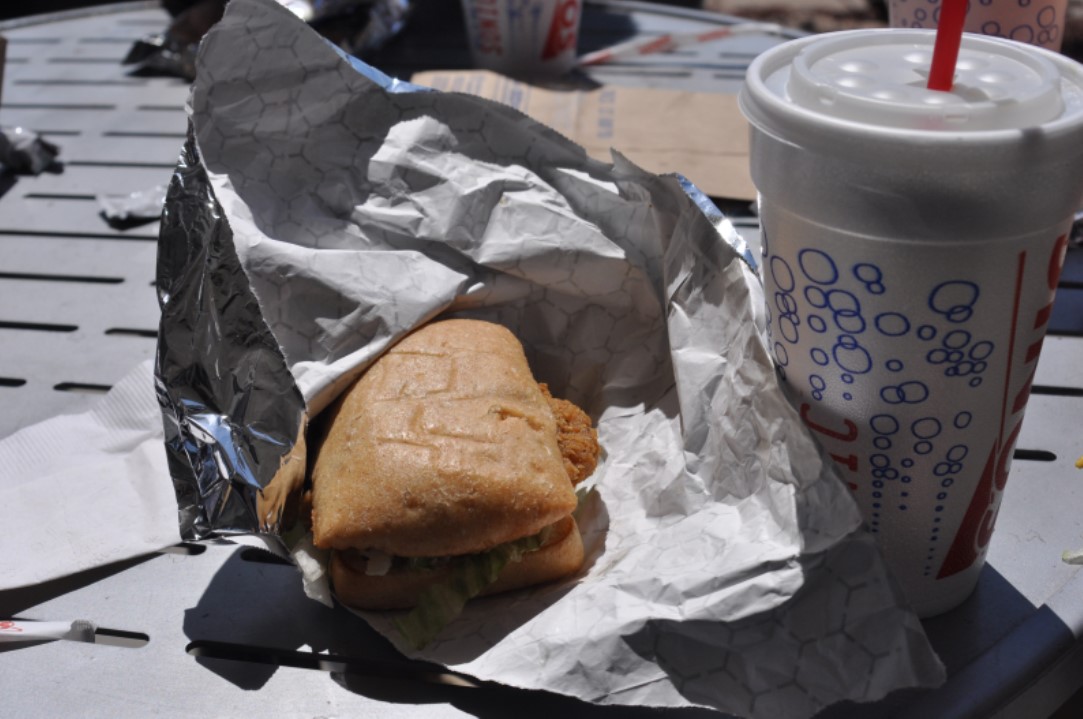 When we returned to the competition, it was time for Corn Dog’s first test: the taxi mission. The airplane had to taxi (roll without taking off) across forty feet of corrugated roofing surface, and we watched nervously to see if our landing gear was up for the job. 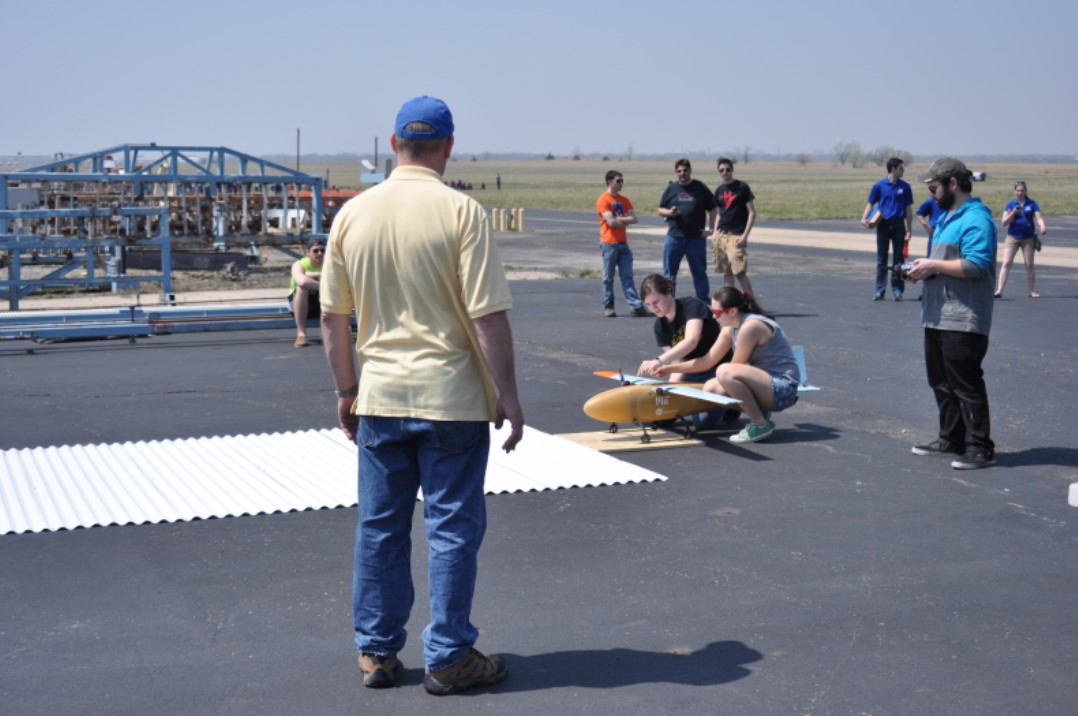 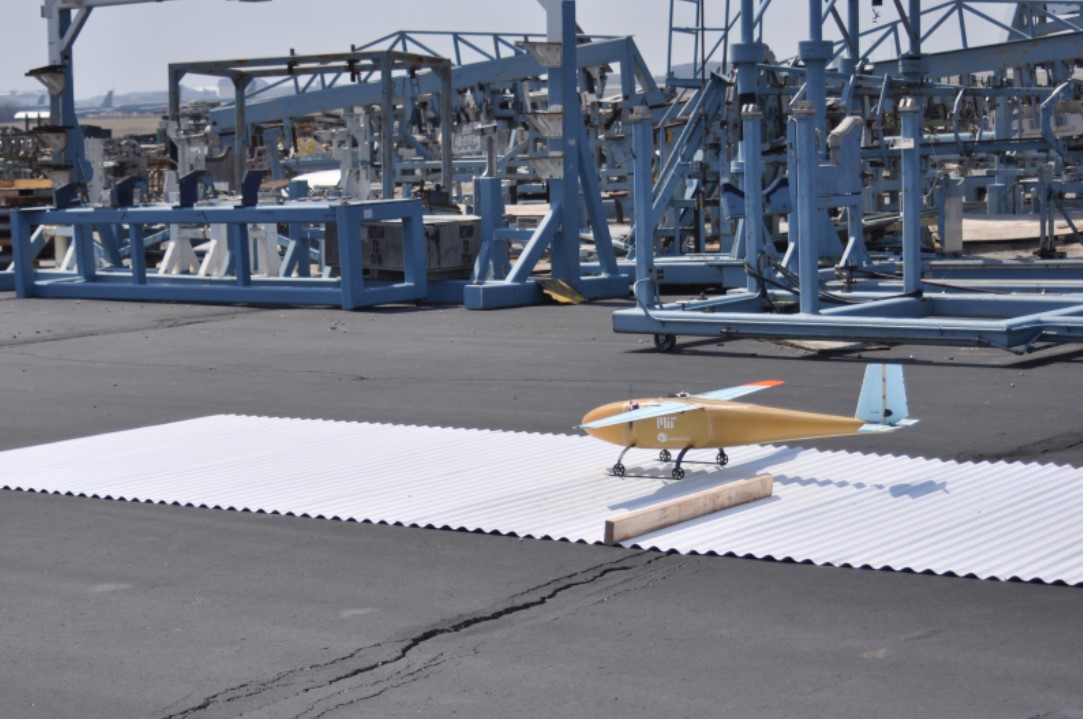 Corn Dog, being the amazing plane we built it to be, passed the taxi mission with flying colors (or rather, rolling colors), and we headed back into the hangar for some more tune-ups and adjustments in anticipation of our first flight mission. Unfortunately we ran into some difficulties with our electronics and decided we weren’t ready to fly today, so tomorrow (Saturday) we’ll hopefully be flying all three of our flight missions. We fixed our bugs, headed to Olive Garden for a well-deserved dinner, and then called it a night. 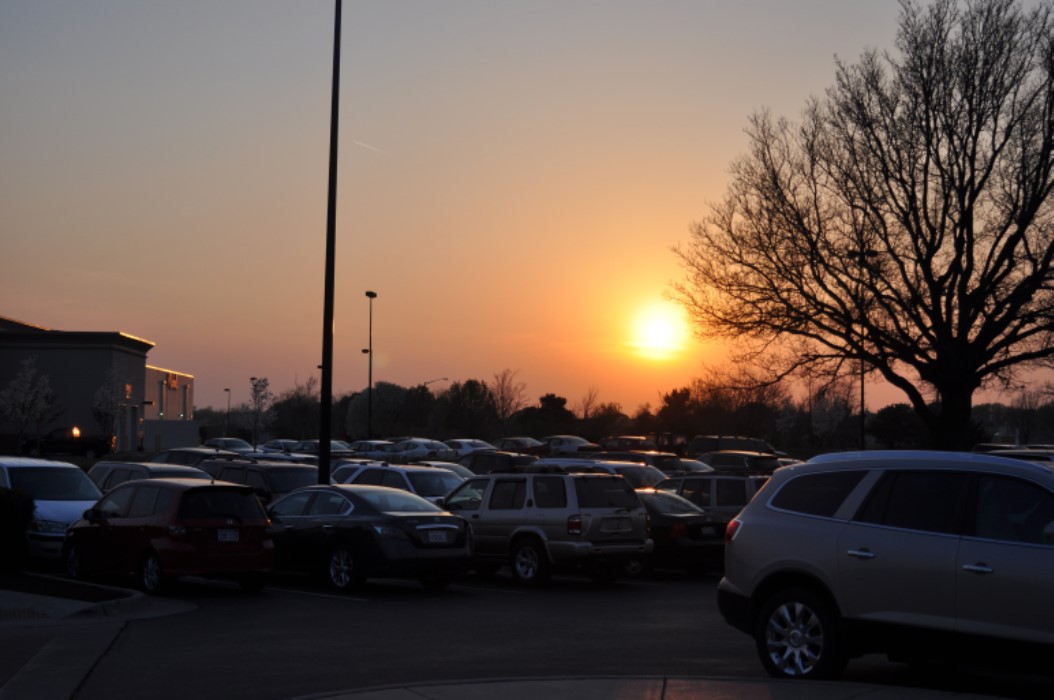 Stay tuned for more pictures of Corn Dog (in flight!) and reports of our competition progress. Wish us luck for our flight missions tomorrow, that we may bring glory to the Institvte :)