Did you know Dr. Seuss was a SigEp?

The land of 85% humidity, cheap food, and scooters that can outmaneuver any NYC taxi.

I woke up last morning to the slow hum of the air conditioner, the lazy sunlight streaming in through the gaps in the blinds. I rolled over, and realized – to my delight – that I was back in my “own” bed. I half expected my sister to open the door, telling me that we’re going to school (for some odd reason, I never used an alarm clock in high school – my sister always got up before me, so she would always wake me up).

It felt so nice being back; and yet so different.

It seems almost hard to imagine that this time last week, I was having trouble falling asleep due to the impending 8.02 final (which I managed to get one percent higher than what I needed to get an A for the course…as a result my course grade was 0.2% higher than the A cutoff. booyah!).

And yet, now it’s all over. I’ve completed all of my science GIRs, and I would never have to take another physics class in my life.

On my long flight back from Boston back to Taipei, I spent some time reflecting on what this year to meant to me, and even though I have no intention of making this a sappy, nostalgic recollection – I do feel it’s worthwhile to jot down a few of my thoughts before they fade into obscurity. And I do have a habit of doing this anyway – I feel like reflection is a great way of bringing closure. Even though it isn’t like I’m bring closure to anything significant (like graduating, for example), I’ve nonetheless “graduated” from a year of GIRs, a year of transition, a first year at MIT.

I felt the best learning I got this year didn’t happen in the classroom – it happened in the sleazy bars of Madrid, the intriguing iHouse speaker dinners, the dark fluorescent microscope room in my UROP lab.

1. Discovery is finding out that I needed to draft a study plan for my courses at MIT, rather than relying on last-minute cramming like I did in high school.

7. Discovery is learning to manage a SAT preparation program with over 300 students and answering hundreds of emails from concerned parents.

10. Discovery is having three-hour dinners with my Spanish host over raisins and rice, and each trying to understand the other’s limited vocabulary.

13. Discovery is the first time I fired a gun in the Pistol PE course I took, and getting an adrenaline rush every time I pulled the trigger.

19. Discovery is making a snow angel.

23. Discovery is going to a MUN conference, delivering a speech to delegates from colleges across the United States, and taking a walk around Philadelphia at two in the morning.

28. Discovery is finally understanding this t-shirt.

31. Discovery is seeing how the magnetic constant and the electric constant relate to the speed of light.

32. Discovery is learning that you will burn down the dorm room if you throw a towel over the light bulb in a valiant effort to make the room less bright for sleeping roommates.

44. Discovery is figuring out that you’re supposed to tip your barber.

49. Discovery is dozing off on a sunny day on the Boston Esplanade.

68. Discovery is knowing that it takes exactly 7 minutes to walk from New House to 77 Mass Ave.

70. Discovery is running off to Canada during spring break and taking the Toronto -> NYC Amtrak train which took friggin 13 hours.

79. Discovery is seeing the Statue of Liberty for the first time in my life.

82. Discovery is learning that the guinea pig cannot synthesize its own Vitamin C in 5.111.

86. Discovery is watching another beautiful Charles sunrise after psetting for ~10 hours.

91. Discovery is saving money by buying textbooks from Amazon Marketplace instead of from the MIT Coop.

94. Discovery is realizing that you can’t make agar plates using tap water, even if you autoclave everything.

97. Discovery is knowing that Kresge is 1/8 of a perfect sphere.

100. Discovery is falling in love with pho in Boston.

Just nine months ago, I was a confused prefrosh holding a stack of brand-new 18.02 notes. Nine months later, I’ve successfully navigated my way through the mandatory science classes, completed dozens of psets, and gotten a taste of the MIT firehose. Nine months later, I feel like my head’s became a lot bigger, and maybe – became a little bit smarter.

When hundreds of families descend on the MIT campus once again – it’ll be the beginning of another journey for all of us. The start of a thousand different stories, and the second episode of my time at MIT. But until then…

…there’s the summer in between. :) 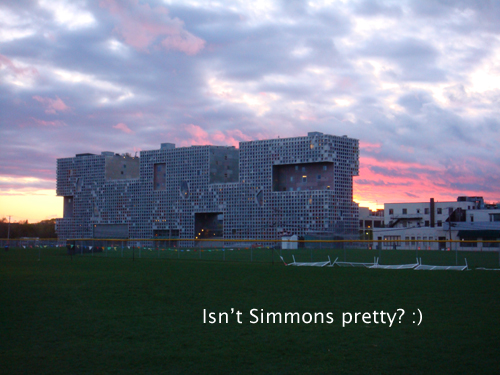