The path to enlightenment is paved with Google searches.

Late last night, I cut the brakes on the Sleep-8-Hours-Per-Day bandwagon and pinwheeled into a rut of intense, hardcore* Googling. Or, to cast the situation in the linguistic frame of an 8 year-old, the auto-complete search feature easily transforms Google from a resource-filled virtual classroom into the hyperactive-kid-infested ball pit at Chuck-E-Cheese: addictively entertaining in the most kindergartenish, brain-frazzling sense of the word. Whilst dragging myself from the caffeinated fog of Internet wanderlust, I metaphorically sprained my ankle over the fact that brilliant, unborn sociological research papers were practically waiting to be pulled from the womb of Google search statistics. What follows may be read as a sloppy, unedited abstract to a half-dozen papers that will never kiss the light of publication.

*If Propel Fitness Water commercials should ever feature X-Treme Web Browsing among shots of sweat-spurting sprinters and tennis players straining their facial muscles into Wolverine-esque contortions, I will sell more bottles of highlighter-colored water than anyone ever should, using my right index finger alone. 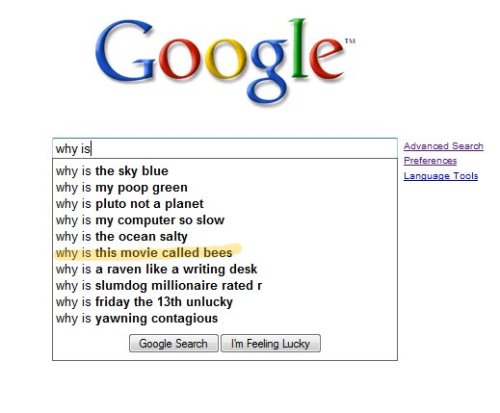 Forget philosophical inquiry; I submit that this picture contains all that anyone ever needs to know about the unanswerable questions that trouble humanity. Mankind, trembling in fear of the natural mysteries that engulf his daily existence, turns to Google and utters through his eternally-present keyboard, why is this movie called bees? (The contextual ambiguity of “this movie” defies reason. Am I the only remaining Internet user unaware that Google has been able to read minds since 1999? Remember, kids, Google knows what movie you watched in your house last night. And why were you watching a movie called bees anyway?) Although I derive Hofstadlerian comfort from #4’s implication that thousands of people are using their computers to make their computers run faster*, I pray that the people who search “why is the ocean salty” are seeking an answer subtler than, “Because it contains salt.”

The implications of this next gem of a screenshot are monolithically more befuddling. Of the innumerable places and professions that begin with an M, MIT is the fourth-most popular one to get into (third if you regard “med school” and “medical school” as the same thing, which you probably should if you ever want to go to medical school instead of mediocrity school, which was incidentally where I went to high school, by the way, but let’s save that story for another pair of parentheses). I felt a surge of pride, until I realized that MIT’s potential applicant pool is only a few perilous notches above the set of people who spend nonzero energy trying to get on Myspace at school.

Second, the terrifying popularity of “how to get into medical school with a low gpa” makes me want to abandon faith in health insurance and maybe even dentists. When you can’t even trust your dentist anymore, you know that your life is pretty much over. 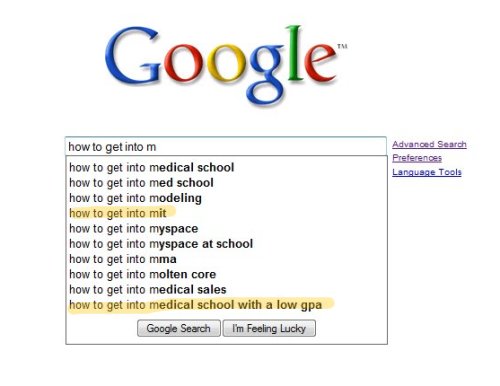 A year of experience has taught me that MIT inspires questions the way Oprah’s book club inspires soccer moms. Common examples range from “Why can’t shopping carts go 35 mph on 4-lane roads?” to “Why does the Stata Center make my eyeballs burn in pain?” to “Assuming that the mass of a space ship is 1000 kg, with a circular sail made of a lightweight, perfectly reflective material, how big would the sail need to be for the space ship to explore the Solar system in 30 years if it is propelled only by radiation pressure from the sun?” Shockingly, Google turned out a vastly different lasagna of cheesy, multilayered inquiries. The following series of questions is left as an exercise to the author. 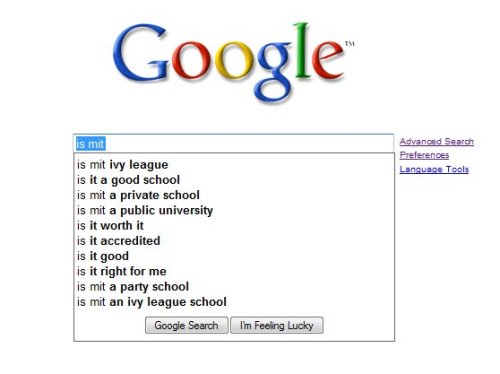 Ready? Here’s the answer key. For extra fun, pretend it’s written upside-down and then try to read it.
1 .No, but sometimes we win Harvard vs. Yale football games anyway.
2. For engineering, science research, problem-solving, hacking, checking your laundry status on the Internet, and staying up past your bedtime and then past your waking-up time with the most brilliant and quirky people you will ever know- yes. For learning how to live a healthy, productive life without omnipresent wifi- no.
3. Yes
4. See answer to #3, apply logic skills.
5. See answer to #2, apply inference.
6. I hope so.
7. Yeah, it’s pretty tasty.
8. A functionally equivalent question is, are you comfortable with bizarre gardens of creativity flowering relentlessly through the toughest intellectual landscape on Earth? Also, does the crudely hilarious simplicity of the following image melt your heart with warm, buttery pride? If so, yes. 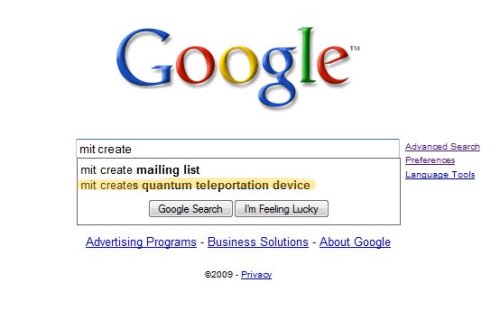 (Seeing this was like getting creamed in the face with a plateful of whipped irony. Even I can’t run and hide from the nagging reminder that MIT is one of the world’s pioneers in [insert whatever technological field you feel like inserting here at the moment]. Google, on the other hand, primarily registers MIT’s creative minds as the generators of mailing lists and “quantum teleportation devices.” Which, come to think of it, almost dead-on encapsulates the weirdness of MIT’s public image while paying tribute to the ingenuity of mailing lists like free-food.)

Deconstructing MIT’s image through the shallow windows of the proletarian Googler sort of made me paranoid and self-conscious after about 10 minutes. Although I’m chill with the archetypal student persona jigsawed together from 21, last summer’s subway hack, and sundry news stories about MIT students wearing permutations of computers, the last item on the next list still gives me nightmares. What if my roommate’s sixth sense is the Internet? Am I supposed to feel inferior or weirded out or worried about network problems that I can’t fix because they’re emanating from inside my roommate’s cerebral cortex? Is MIT right for me? 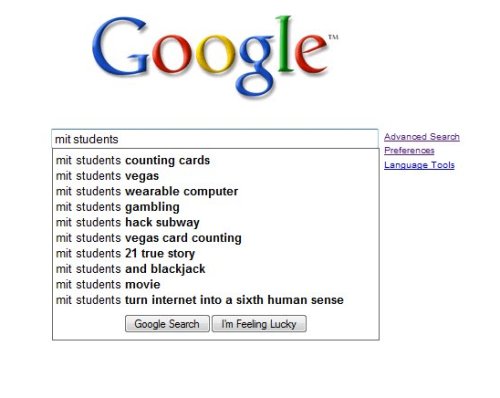 This was even more disturbing. Could it be possible that the MIT Student Center basement is much, much deeper than I thought? 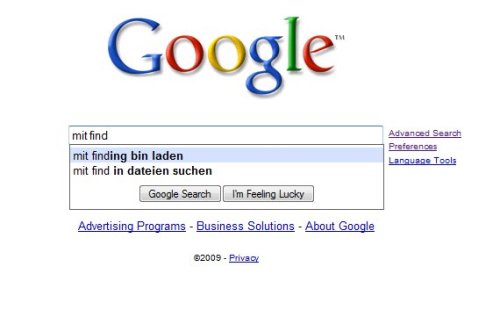 And then I saw this. Like a hefty swig of Drain-O gulping down clogged pipes, the following juxtaposition dissolved every last hairball of doubt in the mental sink where I’d been pouring my Googlified impressions of MIT. 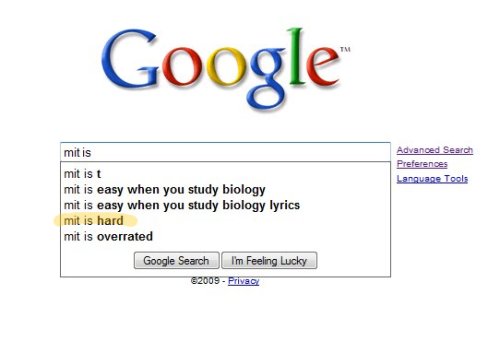 And then, like a violently acerbic streak of balsamic vinegar in your mild white strawberry ice cream, you’re struck by a gleaming contrast that fills every corner of your brain with delicious, dessert-like irony. To wit: 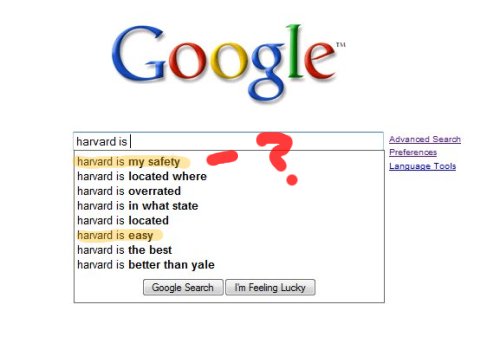 According to the Internet, Harvard just got 1-upped.