Today, November 3rd, 2020, is Election Day in the United States. Many millions of Americans have already voted by mail or in-person; more will cast their ballots today. Here at MIT, employees are guaranteed time off for voting, and faculty have been instructed to avoid scheduling assignments or exams to help students have more time to vote. For students and staff who live and vote in Cambridge, there is a polling location at Kresge Auditorium.⁠01 MIT is, to my knowledge, the only college in Cambridge with a polling location on its campus, the result of student activism in the 1990s to demand better access to the franchise. Meanwhile, TurboVote — a software system that makes it easier to register to vote and request an absentee ballot — has been embedded into student and staff dashboards, which, as part of the broader MITVote initiative, has helped substantially raise the registration and voting rate of MIT students to what look to be record highs. 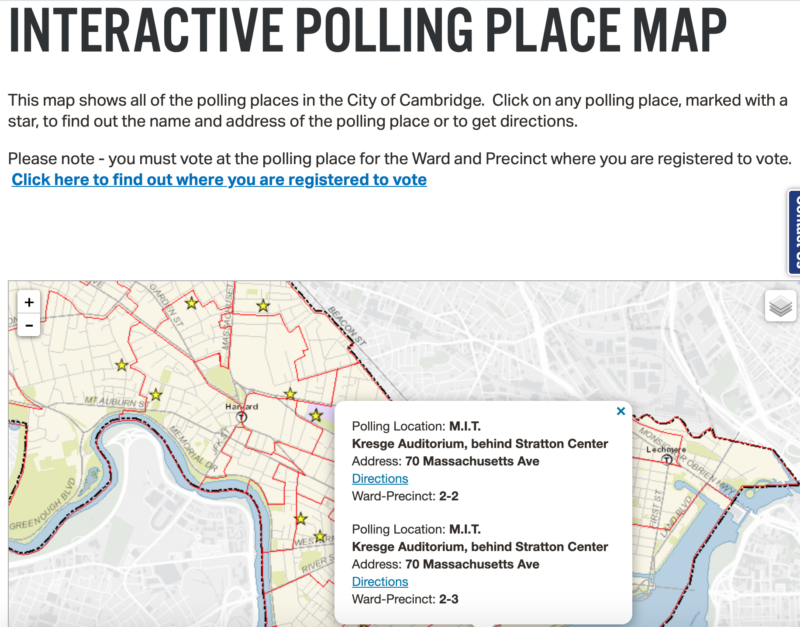 Last week, President Reif sent a thoughtful letter to the MIT community about navigating this contentious election during the COVID pandemic. He reminded us that while MIT’s nonprofit status legally forbids the Institution from endorsing or opposing any candidate or party, it allows us to take public positions on policies that benefit or threaten our mission or our community, as when MIT sued the Trump administration earlier this year on behalf of our international students, defended undocumented students, and opposed bans on transgender military recruitment. He also wrote:

In the coming weeks, I hope we will remember this feeling of pulling together – because, for all that we have in common, we do not agree on everything. As the election nears, it is important to acknowledge that the great global family of MIT includes people with a wide variety of political views. By definition then, however the coming election turns out, some members of our community will be disappointed, heartbroken, angry. If the issues at stake feel fairly distant to you, please know that there are also members of our community who fear direct, disturbing personal consequences in their daily lives.

Whatever the outcome, I very much hope that in our interactions with one another, we can hold ourselves to our usual high standards of kindness, decency, compassion, inclusion and mutual respect – even when it is difficult, and especially toward those with whom we may disagree.

This fall, I am co-teaching a First-Year Advising Seminar on Media and the 2020 Election. My ten advisees include students from a variety of socioeconomic backgrounds across the United States (and also abroad). They’ve chosen to take this seminar to learn more about how media and politics shape each other, but also to have a group of people with whom to share this white-knuckled navigation of our national experiment, as they both observe and participate in the quadrennial process of picking a president. Throughout this class, we have often discussed these stakes, and shared our hopes and fears in ways that help us understand each other and the world we inhabit together.

As first-years, they join (even if virtually) an institution full of students with a vibrant sense of civic engagement. When I arrived at MIT, in 2009, with a background in civic tech and policy research, I recall being told that the students here were characterologically disengaged: stereotypically narrow-minded technocrats who understood politics as consisting of problems to be solved rather than struggles to be undertaken. If that was true then (and I’m not sure it was) it isn’t now: I’ve spent the last four years watching our students not only register to vote at higher and higher rates, but protest the travel ban that kept their classmates (and others) out of the country, organize traditional vigils and transformational practices to support racial justice, and work as student researchers to advance healthy elections. Through these (and other) actions, they have been able to participate in a variety of modes of political engagement, and enact change in a manner consistent with MIT’s mission of serving the nation and the world in the public interest.

I see these recent events as consistent with a longstanding commitment to democracy built deeply into the Institute. Indeed, as the historian Debbie Douglas has noted, the Lewis Report, which reformed the MIT undergraduate education in 1949, was intended to culturally, educationally, and organizationally redesign MIT to both embody and advance democratic values and practices. The authors of that report, who saw mid-century authoritarianism as an existential threat, reasoned that “since we attract some of the best youth of this and other countries, the Institute is obligated to educate them to be not only capable technical [people but also] aware of their responsibilities as citizens.”

As Stu, our Dean, wrote in his 2018 blog post about the Parkland protests, the mens et manus motto of MIT applies to our civic education as well:

We also believe that civic responsibility is, like most things at MIT, something you learn best by doing: indeed, to be civically responsible is to put into practice the obligation we owe to each other and to the common good. At MIT our students govern and manage their residences, serve on influential committees that inform Institute affairs, make policy recommendations to serve social goals, and, yes, protest, at the local and national level. They’ve done all these things for generations. Indeed, the broad autonomy awarded to — and the responsibility expected from — MIT students is a core feature of our educational mission and culture: we hold our students to a high standard and give them a wide berth. It would be at best quixotic, and at worst hypocritical, if we treated our applicants differently, penalizing them for engaging in responsible, responsive citizenship as the students at Stoneman Douglas and elsewhere have done.

Today is an anxious day: regardless of their political persuasion, almost everyone agrees that the stakes are high, and the outcome undetermined. But I am proud of the energy and commitment that our students have shown toward determining it democratically, in all senses; helping to build, with the slow and steady strength of many hands, the world they want to live in, today and in all the days yet to come.