MIT is like a surprise birthday party, but without the birthday or the party.

(Editor’s note: For rhetorical purposes, let’s pretend that “today” is October 24th, which is when the first paragraph was conceived in a rush of inspiration mixed with Google calendar.)

Exactly one year ago today, I walked onto the MIT campus for the first time and nearly hated it for an entire 12 hours. Cambridge was wrapped in a wet blanket of cold, drippy weather at the time with hardly an ounce of sunlight to spare, and the hotel failed to serve bagels in the morning. I did a campus tour, which was a few decimal places short of exciting, and walked around for the entire infinity of a drizzly afternoon, feeling like an intruder on a well-trimmed private lawn that contained too many people with MacBooks. On the semi-bright side, I had signed up for an overnight visit to spend the night with a real, living MIT student in a real, non-living dorm known as McCormick Hall, but on the dim side, biology and I were no longer on speaking terms while my overnight host was a biology major who got stuck in a lab for most of the day. I mean, I’m sure she was voluntarily stuck there, not that the floors were covered in adhesive materials. At the time, I hadn’t yet discovered the unspeakable deliciousness of McCormick’s water fountains, so life was fairly joyless.

Somehow, the first night changed everything in a way subtle and inexplicable as the softness of a fresh-baked bagel. Perhaps it was the hilarious conversations I had with my host and her hallmates, or the spontaneous midnight tour of the MIT tunnels, or the fact that my host and I found an elevator in the great outdoors, or the 1 AM run to Simmons Hall, or the tingling discovery that Simmons Hall is supersaturated with tiny windows, or the thrill of hearing student musicians practicing in the Building 4 during the wee hours of the morning, or all of the above, or none of the above, or maybe I imagined it all because I was still struggling to accept the fact that the hotel had no bagels. I woke up on the floor of a dorm room the next morning to a gloriously confusing faceful of carpet and found that my host had slept placidly through her alarm. As we dined fancifully on glasses of cold cereal minutes later, a wonderfully carbonated feeling began to bubble up inside me as I crunched on on corn pops, sitting on a crunchy mattress in one of the greatest, crunchiest learning institutions in the world.

But the truth is, I probably made up the last sentence. In retrospect, 9:00 AM on a Thursday morning in 2007 seems to be a juicy, cooked-to-medium-rare slice of time in which I should have tasted the next four years of my life in blood-searing vividity*. Not so. I ended up telling my friends back home that MIT was only fractionally as exciting as the pamphlets and information sessions would suggest, and they probably believed me until I forced them all to read this blog. The point is, you should always make your friends think you’re a huge liar whenever possible**.

*Pardon me, mitBeef is supposed to have a meeting soon.

In the end, my visit was still enough to convince me to apply. At the time, I was still in the papery, testy, AP-classy dawn of my junior year and tossing around the idea of leaving high school a year early until I had tossed myself a nice salad of educational subversiveness dressed with a straight-A, finished-the-hardest-courses-available high school transcript. The secret master plan was that I would start college ASAP if I was accepted to a university that I sincerely and deeply wanted to attend, but otherwise I’d finish high school on schedule and deal with the minor injustices of life like everyone else, except with less spamming. The $65 application fees seemed like a Big Deal, so I ended up slacking off and applying to only one college (to be honest, I estimated that my chances of being accepted anywhere as a junior were fairly slender). Also, I lied to all of my friends again and didn’t tell anyone that I was jumping overboard the USS Public High School until I got my acceptance letter in March.

*No, really, you shouldn’t lie to your friends, despite the fact that I do it every 10 minutes or so.

Thankfully, it worked out anyway after a most unwelcome rush of last-minute standardized testing. Which is why I’m in Random Hall right now, basking in the company of radiant friends and a friendly radiator, happier and more overworked and did-I-mention-happier than I ever could have believed possible from my first visit.

My desire to convince you of this is so immense that I snapped a few pictures of the bloomingly apocalyptic sunset as I walked across the railroad tracks to Random Hall. 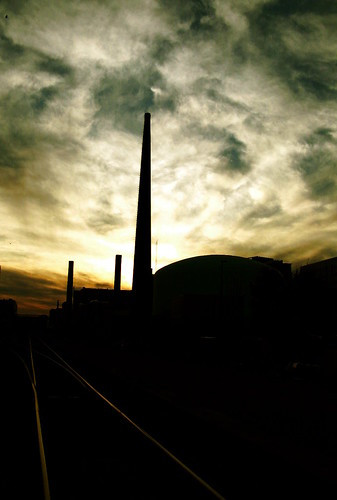 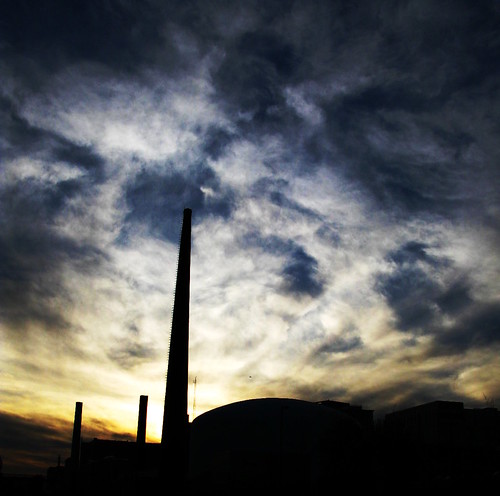 Granted, it’s now Wednesday night a week later after I began writing this blog, and I’ve just crawled through a narrow pipe named the Longest Half-Week of My Life. On the way over here from the far end of Monday, I’ve plunged through a test, an advising seminar, a spontaneous PE class in which I tried squash for the first time (the sport, not the vegetable), an attempt to register for fencing, 12.5 hours of classes, the acquisition of another part-time job, a frenzy of costume-making, broccoli, the unexpected challenges of dressing as a mailing list for Halloween, study sessions, a Halloween band concert and afterparty, a night of studying*, Paul ’12’s grandmother’s pastry recipes suddenly incarnated in the form of caramelized sugar at 1 AM, late night conversations about the Pope’s job benefits, the invention and subsequent enjoyment of the best Spinach Apple Salad that has ever been capitalized in print, four hours of sleep, another test, a Course 15 experiment in which all members of my physics class were given cups of insanely yellow soda with a consent form and a survey, a 3-mile run through riverside corridors of fire-colored leaves and monsoonal winds, a long nap, a phone call, and, as of right now, too many commas.

*Upon my return from the band party, I commenced studying at 9 PM and drove straight through to 3:45 AM, with a few detours for Pope-related conversations, broccoli, Paul’s grandmother’s pastries, and other roadside attractions that become irresistible when you’re running on midnight oil. It was a long night, but I wouldn’t have spent it any other way.

What makes it all worth it? The people. Unfortunately, people are mobile and somewhat difficult to photograph, so I instead took pictures of Random Hall. Consider this a tour of the third floor.

I give you the Dinosaur Comic (link) Whiteboard, which is a whiteboard permanently tattooed with the ingenious crappiness of the Qwantz panel sequence. Edward ’12, in a fiery rampage of unbridled inspiration, inked up the following masterpiece last Friday. It has something to do with chicken, but critics and reviewers are currently unsure of the unifying theme. Particularly noteworthy is the lower panel closest to the viewer, in which the rate of chicken with respect to chicken is not constant, but rather seems to show monotonic linear increase after a period of approximately-sinusoidal behavior. UROP opportunity, if I ever saw one. 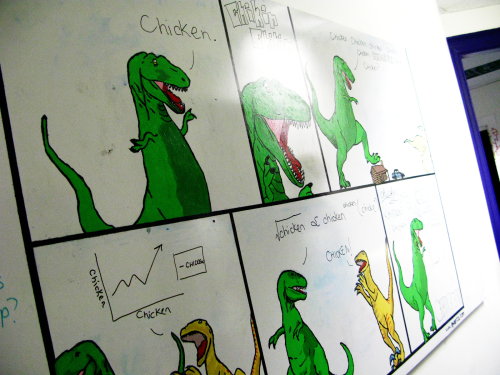 On one side of the Dinosaur Comic is a vertical chessboard mounted to the wall with pieces attached by the magical properties of Velcro. There’s also a wall Scrabble board somewhere that seems to be less popular these days. 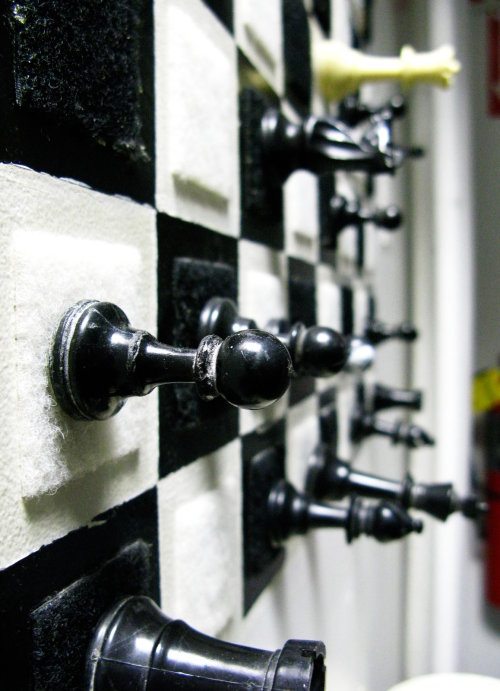 On the other side is Random Hall’s rock-climbing wall, by which I mean a random distributions of nubs stuck onto a wall in the hallway. Sometimes, if I’m in an optimistic state of mind, I try to climb it. I am subsequently reminded of the futility of mankind. 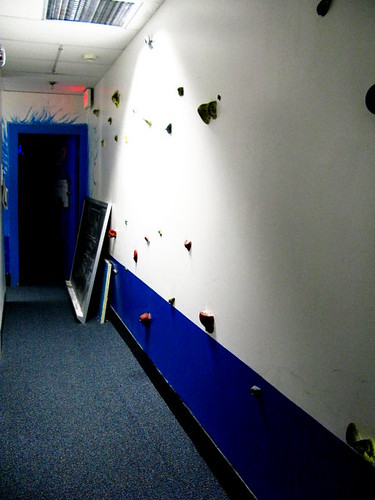 I was taking these pictures while Manishika ’12 and I were cooking dinner, but Manishika must have been doing most of the work if I was taking pictures. I felt bad, so I took a picture of her chimerical, hand-painted door. 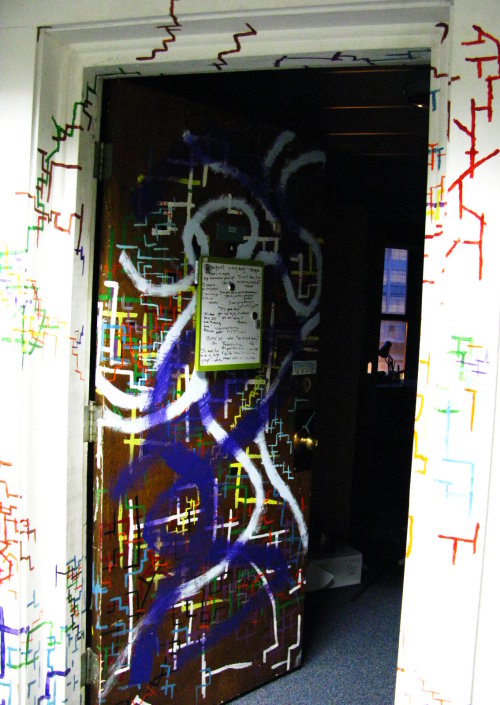 Upon entering the kitchen and finding that the pasta was almost done, my feeling of badness rushed back. So I took a picture of another door. 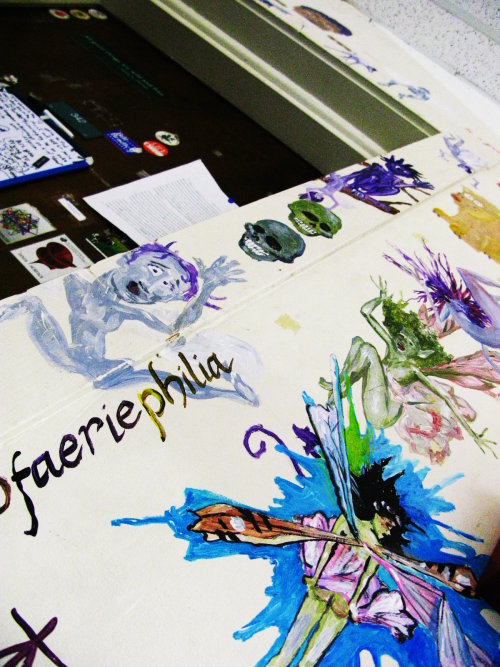 Manishika’s mother’s recipe for Orzo cooked in chicken broth with spinach and pepper induces deliciously warm feelings in all involved. Manishika and I enjoy making it on nights when we’re brain-fried from a linguistics problem set. 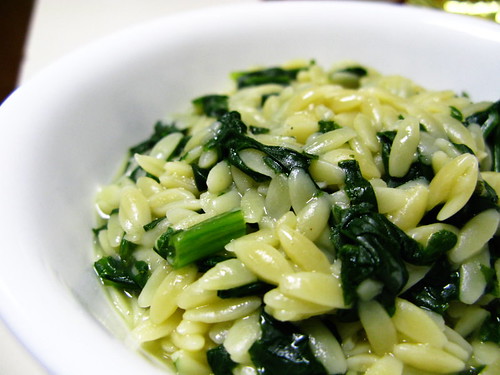 BMF kitchen at 5:30 PM on a Friday night is only fractionally as bustling as it is later in the night, but never have I seen it completely empty at any hour of the day. This picture only further evidences my hypothesis that in any given room at MIT, at least half the occupants must be engaged in face-to-face bonding time with their laptop/computer screen. However, this picture shows the rare case in which nearly all of them are staring at the same screen. 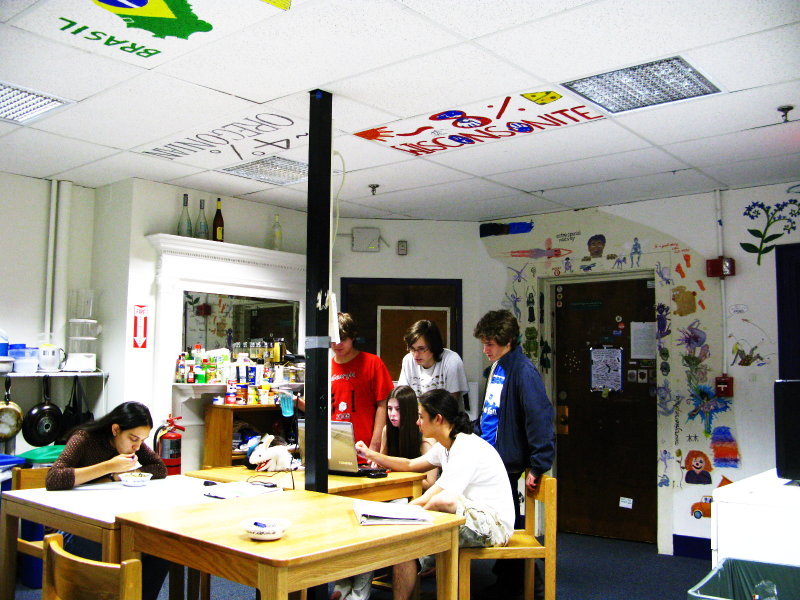 (Notice the ceiling tiles, which are up for artistic grabs at Random)

At midnight, I stood in the midst of a rising storm and watched pumpkins smashing into wet concrete as they descended from the top of the tallest building in Cambridge. Tell that to me a year ago, and I would have called you a liar and told you to start a blog.

46 responses to “One year later”