Photojournalism and answers to some questions by Mollie B. '06

First, I will note with some sadness that it is currently raining outside. I hate winter rain — it could be snowing so much more productively. It is apparently supposed to continue snowing later today, so I’ll cross my fingers for that.

In either case, I’m planning to take my umbrella when Adam and I go Christmas shopping tonight. And if the idea of carrying an umbrella in a snowstorm doesn’t make immediate intuitive sense to you, you’ve clearly never lived though a New England winter.

Timur had asked me to take pictures the next time it snowed (snew would be a better plural, I think, but no one asks me), so here are two pictures I took on my way to class this morning. 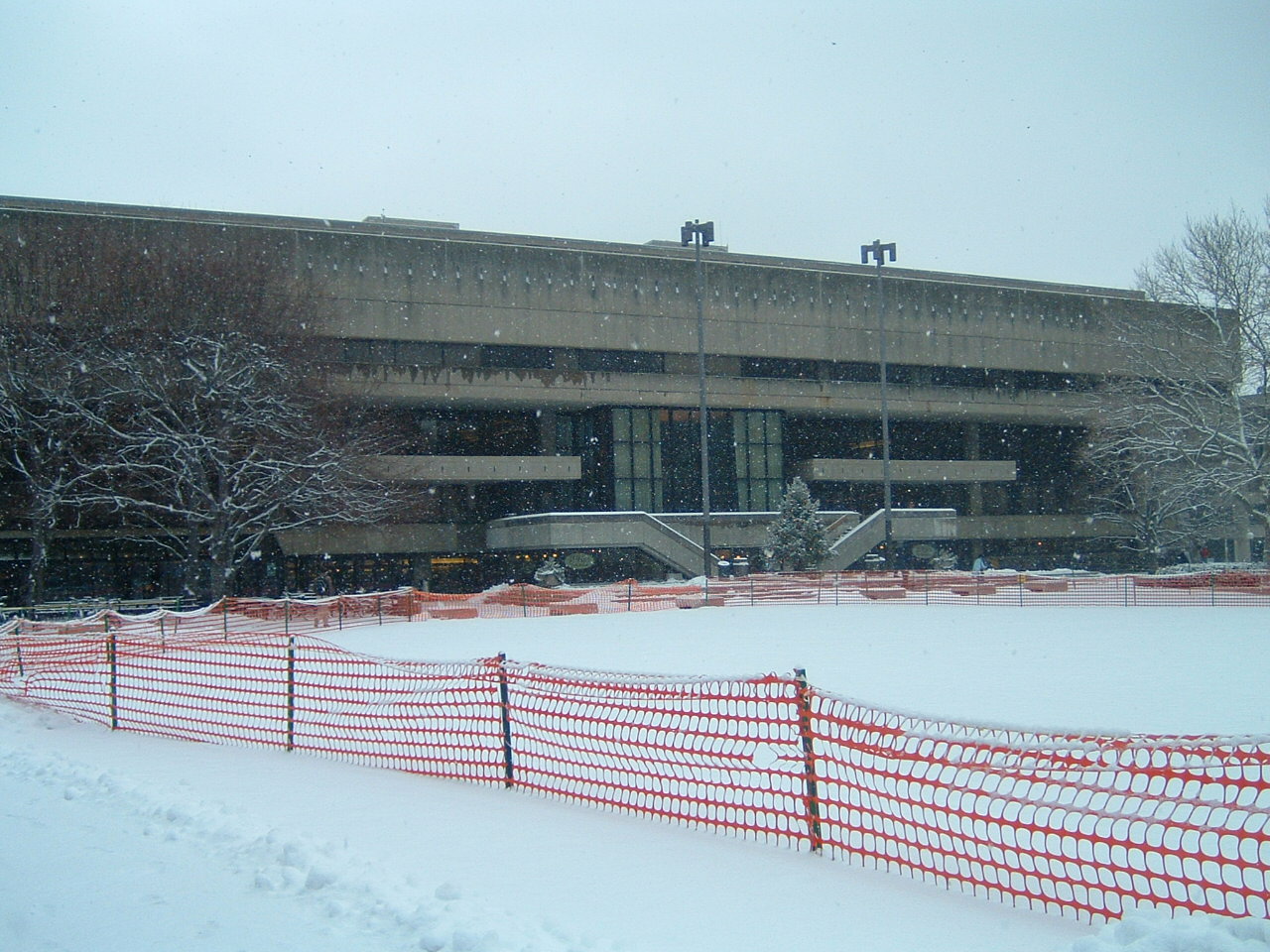 (Click on the picture to see the glorious snowiness — it’s not showing up well in the thumbnail.) Notice the cheerful little Christmas tree in front of the Student Center. 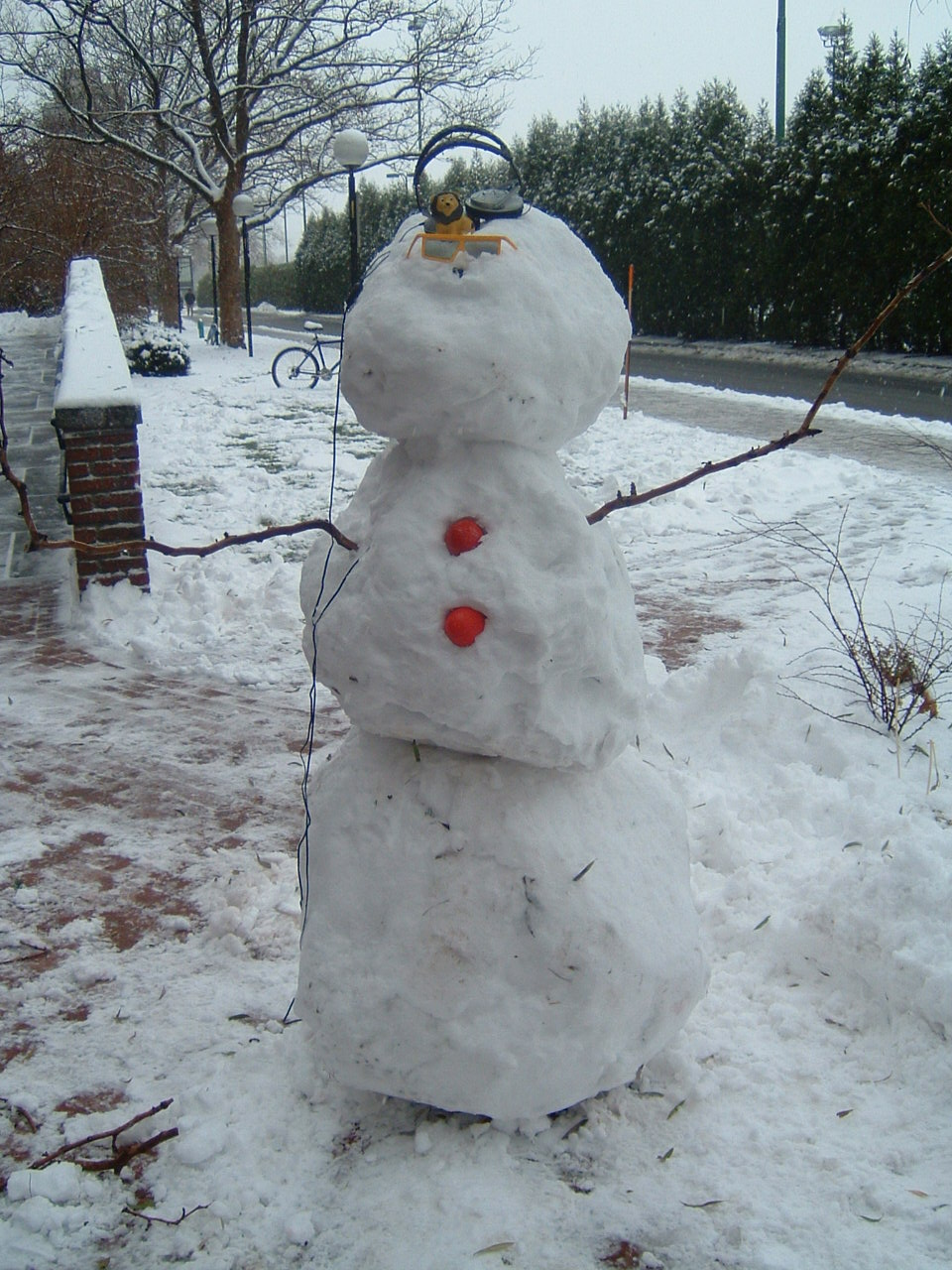 I saw this snowman outside Baker House, one of the dorms on Dorm Row. I don’t know why there’s a lion on his head.

I also wanted to share the “Picower manifesto”, which was unveiled at the official opening ceremony for the Picower Center for Learning and Memory‘s new home, building 46. The launch was quite a fete, with more Nobel laureates than you can shake a stick at in attendance.

In case it is confusing why I should care about this, I work in Morgan Sheng’s lab in the Picower Center. I didn’t get to see much of the ceremony (I had class), but I did peek over the railing into the atrium and try to pick out Nobel laureates. Eric Kandel was, as usual, wearing the cutest bow tie in existence.

So the Picower manifesto, viewable in photographic form here:
We dedicate ourselves to the principle that the advancement of knowledge comes through an unwavering commitment to the integrity of science
We hold as our ultimate mission to understand the mysteries of the mind through study of the brain
We recognize that achieving these goals will require the shared vision and collective efforts of all members of our community
We embrace the beauty of truth and the power it holds to change the world
This we believe, and this we shall accomplish

…I think you could rewrite the title of that manifesto as “Why I Want to Be a Scientist” by me. Awesome.

Questions!
1. Everyone thinks I write my a’s in an odd way. (Adnan thinks they look like alphas, which I’ve always secretly thought myself.) I don’t think it’s ever gotten me into trouble — I mean, I’ve never lost points on a test because of them. People do complain about them a lot, though.

2. Mushal asked how the biology undergraduate program is ranked. Well, USNWR only ranks grad programs in the sciences (and even those rankings were made back in 2002!), so MIT’s #2 spot in the grad rankings is the best estimate I have. The undergraduate program isn’t significantly different from the grad program, though — we have all the same professors, and in many classes grad students are learning the material alongside the undergrads. Intro biology classes are somewhat large — 300ish people — but the upper-division classes are often smaller than 30. There are, of course, plenty of undergraduate research opportunities in the department. Other schools that are good in bio are Stanford, Harvard, and Caltech… Johns Hopkins, Duke, and UC Berkeley are also excellent, and slightly less difficult to get into. Basically, you want to go somewhere where you will get a good grounding in biology, have close relationships with your professors, and do undergraduate research.

3. Anna asked how students follow a premedical track when there’s no official “premed” major at MIT. Many premeds at MIT major in biology (although it’s not uncommon to major in something else; medical schools don’t care what your major is so long as you take the required premed classes, many of which are General Institute Requirements that every MIT student must take anyway). Premed students at MIT are assigned a premed advisor who helps them with med school-related decisions. 82% of MIT undergrads who applied to medical school last year got in somewhere.

5. Christina asked how familiar I am with the AAAS. I am a member, actually — I just got my membership card in the mail today! :) I don’t explicitly know if anyone is going to the conference, but many MIT professors go to every conference they can get their hands on, so it wouldn’t surprise me if several of them were planning to go. At any rate, several professors (and President Hockfield) were recently selected to be AAAS fellows.

Ok, off to hang out with Seve ’05, who is visiting this weekend since his first semester at USC film school has ended already. (USC’s film school, by the way, is probably the best in the country.) He graduated with a degree in course 2 (mechanical engineering), thereby proving that you can, in fact, do just about anything with an MIT degree!

PS — It is now snowing and thunderstorming at the same time. I am terribly confused.

8 responses to “Photojournalism and answers to some questions”