Today I neglected to bring a jacket to class. As the afternoon waned impassively toward night, the last hanging breaths of August condensed into soupy grey cold specked with watery yellow sunstreaks. By conservative estimates, I caught six different strains of flu on the way home at 6:30 pm. Nonetheless, after a quick homemade dinner of soba, ginger, almonds, and dewy-fresh vegetables from MIT’s weekly farmer’s market, I barely noticed the initial symptoms of tuberculosis.

On the flip side of the burger (to coin a stupid-sounding idiom), I no longer have an excuse for putting off this blog entry until T_n, where T_n > 5 minutes from now. A week or so ago, Becky from somewhere-recently-visited-by-Quentin-McArthur emailed me a laundry list of excellent questions that I could answer in less time than most questions I encounter on an hourly basis. I started to write back, “Thanks, Becky! It’s so nice to make human communication once in a while! See you on the Internet sometime,” and then I figured that she probably wanted me to answer her questions instead of becoming her Facebook buddy. (Curmudgeonly aside: It’s a sad, sad world when I get more Facebook friend requests than personal emails. Also, you kids get off my lawn.)

Hi Yan –
When Quinton McArthur came to our school the other day, I asked him a
question about the physics department at MIT, and he directed me to you. I
actually have more than one question, but they’re roughly in order of
importance if you don’t have time to answer them all.

1. UROP seems like it would allow you to do awesome research as an
undergrad. Has this been your experience? Is there anything about physics
UROPs that make them different? Are experimental and theoretical research
opportunities both available to undergrads? How do students make time for
research during the academic year, or do most students do UROPs during the
summer?

UROP, MIT’s undergrad research program, has improved my overall standard of living as well as my GDP and average lifespan. My first research group in the Materials Science department paid 11 bucks an hour, which was increased to $12/hour over the summer, for me to build and test batteries that wouldn’t explode or melt or otherwise make a huge, expensive mess and ruin everyone’s life. I eventually started running out of work to do after one semester, so I adopted a second UROP in the Plasma and Fusion Center writing scripts to decipher NASA spacecraft data and explain the mysterious phenomenon of magnetic reconnection. After one month, I started to think in MATLAB instead of in English, but it was nonetheless an enjoyable introduction to physics research.

UROPs are more common during IAP and Summer, but plenty of people (like me) devote up to 6 hours per week to research, usually after class on weekdays. Think of it as like taking half a class while getting paid. It’s a valuable way to learn relevant skills for your field while getting rich at a very, very slow rate.

All professors in the Physics department that I’ve met so far have been open to sponsoring undergrad research. At least one requires that his students take 8.04 (quantum) before doing research in his group. However, most labs, experimental and theoretical, could always use the extra help with coding and performing routine tasks traditionally reserved for intelligent primates and large, powerful computers. (Well, maybe not the string theorists. Or LIGO, since LIGO was crowded with UROPs last time I applied for one in their group.) You might not get an intellectually dazzling UROP during your first years at MIT, but it’s well worth the experience.

2. In a blog post from December, 2007, Lulu wrote that around 13/50 of
physics majors (just for course 8, not 8-B) are women. Do you think this
estimate is accurate? Do you notice this imbalance at all? Does it not
matter because the overall Institute gender numbers are essentially equal?
Does it not matter just because it doesn’t matter whether the people
you’re doing physics with are girls or guys? Have you had any
gender-related problems (academic or otherwise) as a physics major
specifically?

Gender imbalance has never influenced my experience at MIT. I’m a bit startled by your (Lulu’s?) numbers, since at least half of the Physics majors I’ve met are women. Granted, I spend a lot of time around Undergraduate Women in Physics, which is perhaps not a representative sample of the gender distribution.

Then again, the mere existence of a group at MIT dedicated to providing support for female physicists suggests that your speculations are valid. I’ve also heard from professors that more men tend to take the advanced versions of intro Physics classes, such as 8.022. However, personal evidence shows that more women tend to wake up in time for lecture. (At least when McGreevy taught it.)

3. I remember at least Chris S. blogging about how his biology psets and
tests test more his ability to think and solve problems than his
memorization skills. Is there a similar emphasis on thinking over
memorizing in the physics classes?

Yes. At least for the intro classes, all relevant formulae as well as useful math identities are provided with each exam. (However, this doesn’t mean that you shouldn’t understand the derivations in all their gory intricacies.) MIT generally tries to ensure that you will never fail because you spent too much time on a test trying to remember the dimensionless factor in the denominator of the Larmor formula (6*pi in SI units, 3/2 in CGS).

Problem sets, similarly, require a lot of braining. This page of my 8.03 pset aptly summarizes life as a Physics major at MIT. 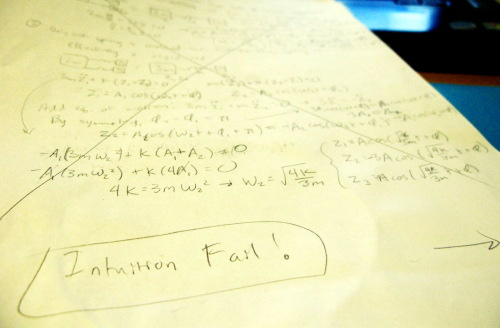 (After taking a shortcut that failed to reach the intended destination, i.e., the correct answer.)

4. I don’t know how well you know the math department, but do you know
where on the spectrum from super applied to super theoretical the math
department classes usually fall? Or are they all over the place? Do most
physics majors end up taking classes at a certain point on this spectrum?

If you look at the math department course catalog, you’ll notice sections subtitled “Applied Math,” “General Math,” “Analysis”, “Theoretical Comp. Sci.,” etc. Math tends to be the all-purpose flour in MIT’s curriculum pantry. A “typical” math class doesn’t really exist; there’s more than enough choices for you to fine-tune the level of applicability until it resonates with your interests. Analysis classes tend to be theoretical, whereas applied math is geared toward engineers, which I just nearly spelled “gearineers.” Time for bed.

Also, I know at least one physics major who accidentally took enough theoretical math classes to get a second major in Course 18. Most people, at least those who aren’t into intense theory, go with just 18.03, 18.06 (or a variant thereof), and 18.04 or an applied math class.

Thank you,
Betsy [last name omitted to create a feeling of suspense]

No problem, Betsy! Want to see my problem sets for this week? Really, you do? Okay!

To be honest, my problem solving skills this week fell short of robust. The trouble started with the double pendulum problem on the 8.03 (Waves n’ Vibrations) problem set, which I naively crammed into the Lagrangian instead of kickin’ it old-school with a force balance diagram. I’m one of those people who use the Lagrangian to calculate the net force on an object falling from rest, you know. 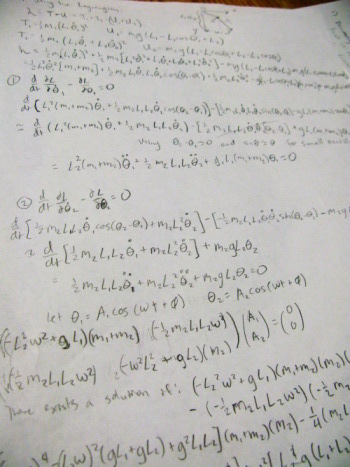 1.5 pages later, the moral of the story was pummeling me in the face. Live and learn but don’t Lagrange. Lagrange isn’t even a verb. 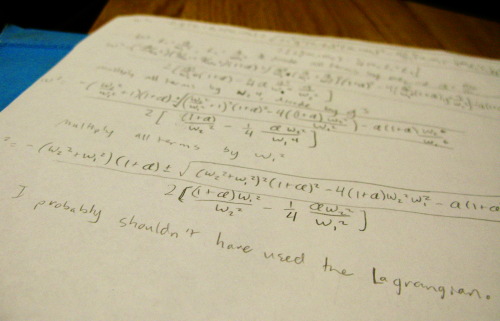 The second sign of impending toil came in an email from the 8.033 (Special Relativity) TA last night that basically read, “Sorry, forgot to mention that you need to show calculations for Problems 2 and 3 instead of just drawing diagrams, because you probably skipped art class in high school anyway.” The only problem was that I had already finished the problem set and, like residents of Manhattan slums during the early factory era, I had no space left. 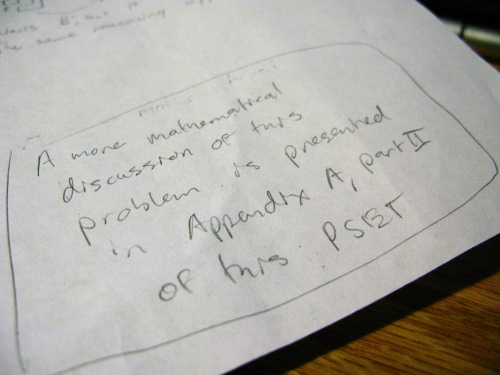 Appendix A turned out to be pretty much the most beautiful thing that I have ever created with my bare hands. 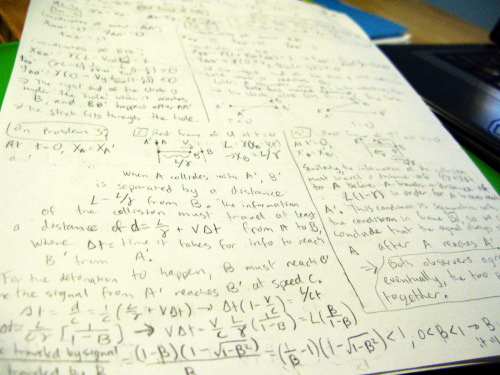 My 8.07 (Electricity and Magnetism II) problem set this week was blissfully merciful, except that everything equivalency statement I tried to prove turned out to be off by either a factor of 2 or a factor of sqrt(c). Did you know that the square root of a meter per second is a fundamental dimensional quantity in both electromagnetic momentum and energy flux? Neither did I.

Sometimes, frustration begs to be cartoonified. 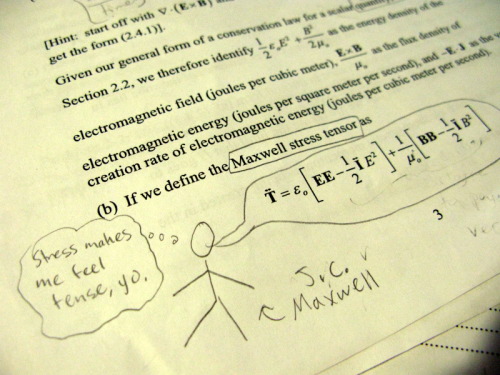 Inspired by Professor Belcher’s mathematically gorgeous field line representations (check them out- as a bonus, the animated ones also make excellent music visualizers), I took a break from work to relax, refresh, and reinterpreted a Van Gogh painting as an electric/magnetic field diagram. 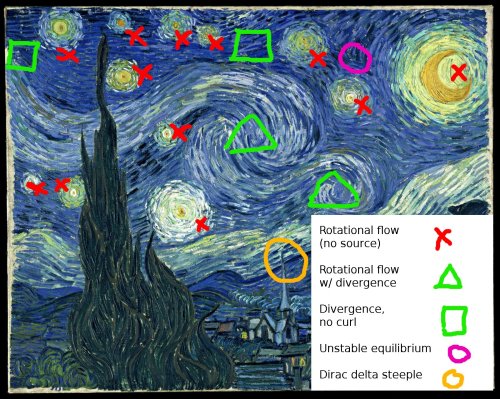 Yep, this qualifies as a break from work.

34 responses to “Physics in the MIT”