Blending In (Guest Entry) by Snively '11

Of singing, eating, and shopping (sorta)

So, first of all, let me start by saying that I had come to MIT CPW with excitement but also deeply rooted stereotypes about the student population. And really, let me just say that I was completely blown away by the diversity of the campus life. I knew that MIT was an amazing school academics-wise but I was tentative about adding that little ’12 after my Facebook status because I’d been, in truth, intimidated by the prospects of attending such a seemingly homogenous academic-oriented school.

Ohohoho, boy was I in for a surprise! The first night was thrilling with meeting new people and the CPW Pre-Frosh Festival. Though I unfortunately don’t have any decent photos from that (many other bloggers will provide that), I was really impressed by the a capella groups, especially the MIT Logarithms. Let me just say that I also made a fool of myself by asking one of the members for an autograph which, WAS, for my friend who had been obsessing over them since she’d seen their Youtube videos. Ah…the wonders of Youtube.

Here’s a photo of them in concert later on in the weekend: 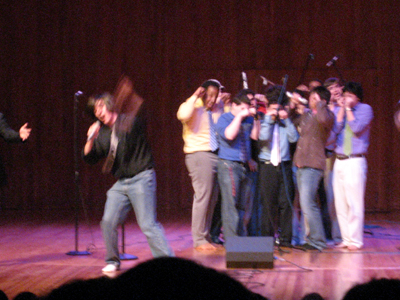 Apparently there’s six or seven A Capella groups. I stopped by in Lobby 7 on Saturday and watched a co-ed group: 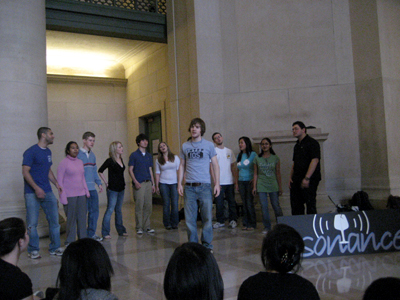 It was just really fun to see all the random students and faculty pass by and stop to listen. There was something about that moment that showed that the community was quite closeknit in many aspects. I was just so glad to see that the arts were not underappreciated.

There was so much to do that I really felt ADD the whole time. And yes, the ubiquitous red CPW guidebook was my Bible. I think I touched base on all the categories of events. I stocked up on plenty of free food- there was food everywhere from functions to dorm dinners. My friend and I had wandered to Bexsley on our first day and managed to snag a hamburger before the residents began to notice the suspicious red CPW booklet peeking out of my purse. But asides from that incident, food was abound! Here’s some delicious cupcakes we made at the Cupcake Making Event for Women at MIT: 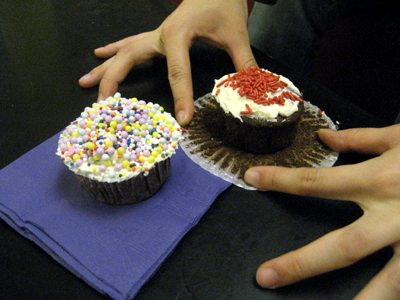 Then a snapshot of the Dumpling Eating Contest hosted by the Chinese Club: 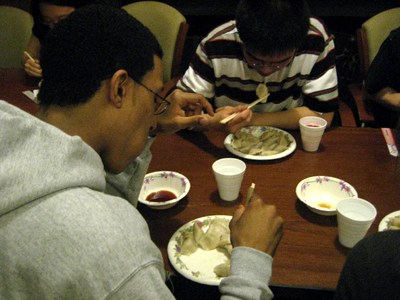 I swear that I was handed flyers for the Chinese Club, Korean BBQ, and a Highlighter Rave in the span of an hour. o.o Anyways, the Dumpling Contest was fun although my friends didn’t win the $25 COOP giftcard. One of my friends had already won a $50 giftcard from a stock-sharing game earlier during CPW so I’d been planning to weedle the $25 giftcard from him if he had won. Alas, I ended up not even making it to the COOP because I had planned to stock up on MIT paraphernalia on Sunday, the last day and I didn’t realize that my train left before the COOP opened. No worries, I ended up ordering a t-shirt online the next day.

So all in all, I met some great people, some different people, and went across the bridge to some pretty spiffy parties. The students already at MIT were really warm and helpful (I think I sat down and talked to a Philosophy major for an hour and a half before I realized that he had to work on a P-set due that night) and definitely dispelled many of my preconceived notions of the ‘typical MIT student’.

Sad to leave but eager to come back to Boston in the fall! 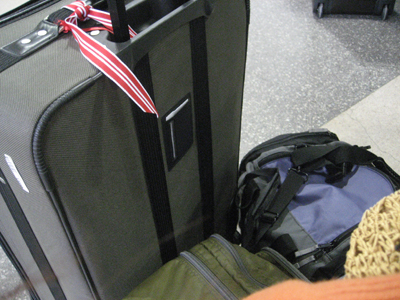 And perhaps next time, I won’t be stuck in the train station for two hours after missing my train by 3 minutes. ToT

4 responses to “Blending In (Guest Entry)”