A Brief History of Thursday by Yan Z. '12

I’m the type of person who never wins the lottery. Were this a persuasive five-paragraph essay, my three thesis-support arguments would be: (1) prior to Monday, I was under the legal lottery ticket purchase age, (2) nobody in my family has ever won the lottery, suggesting that my otherwise-enviable genetic makeup is devoid of lottery-winner DNA, and (3) I’ve heard that it’s statistically improbable to win things that aren’t in cereal boxes.

Well, it turns out that, much like a gourmet pretzel, life is full of twists. On Wednesday night, despite the fact that I had only turned 18 on Monday, despite my genetic misfortunes, despite the misguided expectations instilled in me by uncountable rounds of cereal box giveaways, I won the lottery.

Well, it also turns out that, much like the typical Harvard graduate these days, I didn’t actually make any money. Still, I was ecstatic. Let me explain: during my PBS-infested youth, back when I understood general relativity and had already mastered string theory thanks to the wonders of educational television, I wanted to be a cosmologist like Stephen Hawking and Professor Xavier* from X-Men. My dreams of parsing the grammar of the universe dribbled into the drabness of real-world practicality sometime during high school, but in 9th grade, I was still intent on understanding the structure of spacetime and, more importantly, sounding really smart in front of my English teacher. When Mrs. Chambers assigned our class the most groan-worthy, plagiarism-inducing homework project of the year, I chose to compose an elegant, grammar error-less research report about the intricacies of black holes. It turned out to be less Nobel-prizeworthy than I imagined, but, also much like a gourmet pretzel, it grew into a warm and chewy experience.

*He wasn’t actually a cosmologist, but he could have been if he wanted to.

To be completely honest, most of what I remember about my 9th grade project consists of the gingerly-phrased email that I sent out to some of the most distinguished American astrophysicists of our time (whether or not most of them read it is another question). It contained such deeply eloquent and unforgettable inquiries as, “Why do black holes have angular momentum?” and “Can I time-travel?” and probably ended with about a bajillion thank-yous in a row. Recipients included about half of the astrophysics faculty at Caltech and MIT, which back then was Michigan Institute of Technology in my uncorrected mental database of acronyms. I vividly remember that Professor Max Tegmark at MIT, whose astronomy class I will probably take next year, not only wrote back promptly and graciously but also used an emoticon (this, might I add, largely contributed to my decision to come to MIT two years later).

Fast forward to last week, when my inbox was suddenly abuzz with frenzied announcements from the Society of Physics Students that Kip Thorne had finally agreed to give a colloquium at MIT. Kip, for the biology students reading this, is as close to the asymptote of world famousness as any theoretical physicist can be. Currently the Feynman professor of Physics at Caltech, one of the world’s foremost experts on general relativity, as well as a colleague of Stephen Hawking and Richard Feynman himself, Kip drew the largest audience that I have ever seen in 10-250, one of MIT’s biggest lecture halls. 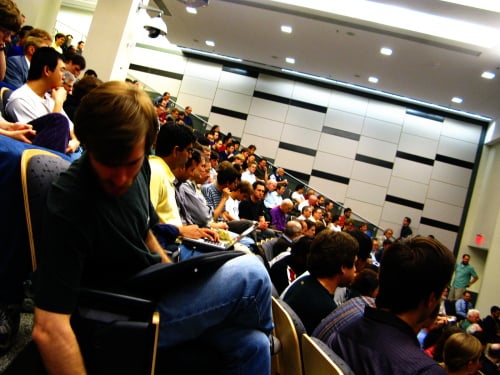 Going back to what I wrote earlier, one of the perks of SPS membership is the lottery for free dinners with distinguished members of the physics community. Thanks to my well-documented genetic inability to win a single lottery, I usually prefer to save my luck for the day when I will be challenged to a life-or-death game of bingo. Kip, however, was a worthy exception. I entered with subdued hopes and miraculously won one of six seats for dinner with The Man. The profound expression of unadulterated joy that came to mind was “Yay!” I didn’t even care that I now had a chance of dying in a bingo game.

As you might have figured by now, nothing was going to stop me from attending the colloquium on Thursday. Kip, after all, had authored one of the books that I’d used for my report in 9th grade. I got an A on the paper. Therefore, Kip helped me pass high school English. As an added bonus, his lecture was bound to be mind-blowingly mind-blowing. (You heard right, I just used the adverb form of an adjective to describe the same adjective. That’s how much it blew the mind. See, I even used it as a verb.) 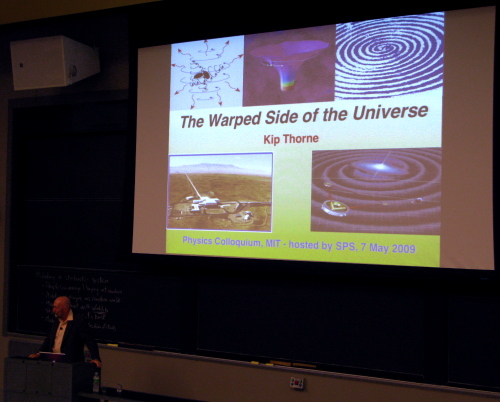 Kip’s talk was divided into two parts, threaded together by the topic of “things made out of warped spacetime instead of matter.” The first half dealt with numerical general relativity, mostly as applied to modeling black hole collisions. As far as the casual viewer is concerned, this translates into cool animations whose creation took an unimaginable amount of time, effort, and Ph.D theses. 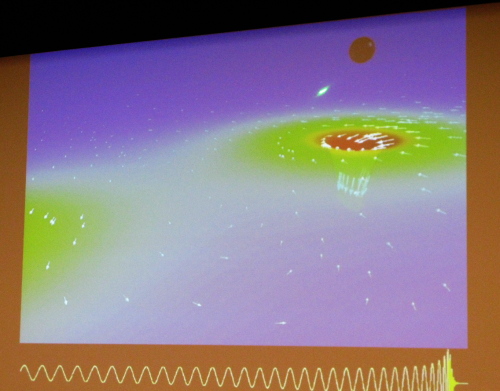 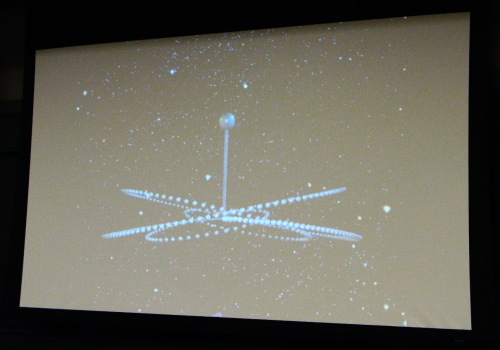 Looking back on the notes I took during the lecture, it appears that I was particularly awed by something Kip mentioned about the nonexistence of EM waves (exclamation point here). Perhaps I was just glad that 8.022 was over for the week. 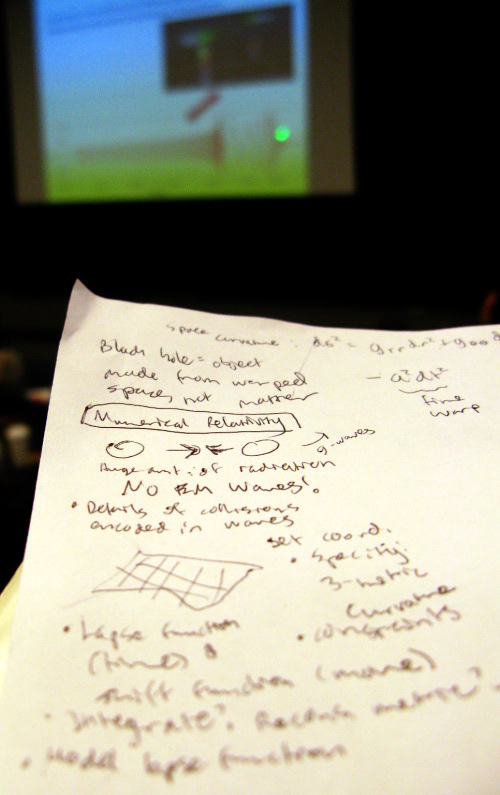 It turns out that, due to the gnarly distortions in spacetime fabric in the vicinity of black holes, angular momentum conservation becomes meaningless! Naturally, this entails that the AP Physics test is meaningless, which confirms my suspicion that the College Board has been swindling us all along. (My own conspiracy theories aside, I found this part of the lecture immensely fascinating. Vectors transported parallel to themselves over curved surfaces are no longer parallel to their original direction when they return to their original position. In curved spacetime, the direction in which a vector points after you move it depends on the path you take. Which means that trying to add vectors together becomes annoyingly hard, much like knitting.)

Some of Kip’s slides especially resonated with his audience. I photoshopped in the relevant connotations for this one: 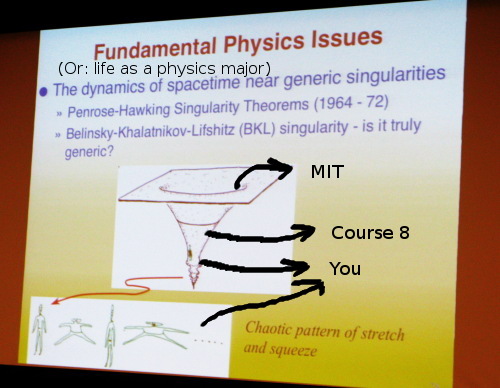 The second half of his lecture was devoted to LIGO, an experiment co-founded by Kip for gravitational wave detection. The set-up involves non-quantum-sized mirrors (as in, on the scale of 40 kg) and bouncing laser beams. Gravitational waves, which literally squeeze and stretch spacetime, are predicted to cause tiny motions in the mirrors on the quantum scale. As this slide makes glaringly clear, the upshot is that humans will see large things behave quantum-mechanically, become impressed, and end up making blockbuster action movies about LIGO. 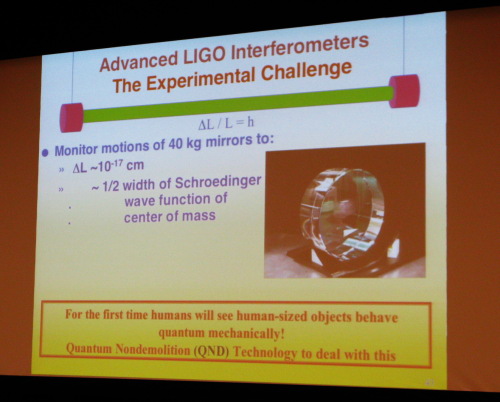 (Over dinner, Kip mentioned that he’s working on a sci-fi movie with Spielberg based on, believe it or not, real Science. The opening scene will involve LIGO discovering gravitational waves. Apparently, all of it will be scientifically plausible while remaining Spielberg-y at the same time. I’ve got high hopes already.)

Once the thunderous applause died down, Kip obligingly gave autographs and stood for pictures. Erons ’12, a longtime fan, got an autograph on one particular page of a book by Stephen Hawking. 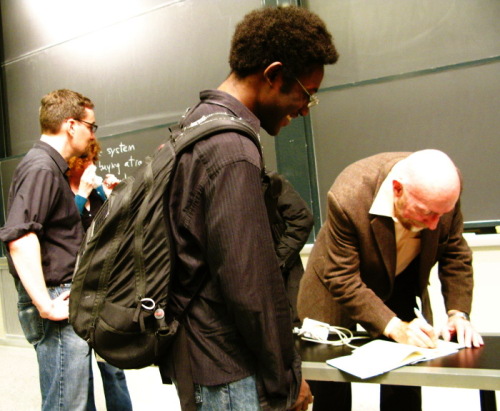 Professor Nergis Mavalvala, whom I mentioned previously in the context of another physics department-sponsored dinner, was also in the audience. Here, Kip congratulates her on her recent tenure. 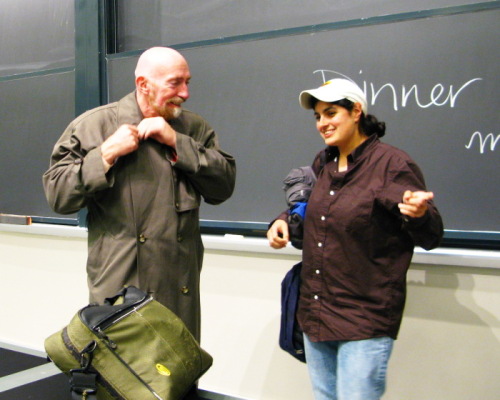 Afterwards, a lucky handful of us randomly-chosen SPS undergrads took Kip to dinner at the Kendall Hotel. Seated in a private dining room eerily reminiscent of a American colonial-era museum exhibit, we chatted about physics, the respective charms of MIT and (cough) Caltech, thermodynamics of black holes (two dinner attendees had a presentation due the next day), Kip’s hobbies (scuba diving?), his friendships with Stephen Hawking and Richard Feynman, and whether or not cosmologists need to justify their existence. Kip was amiable to the point of insisting that we call him by first name, in which regard I failed at least twice. 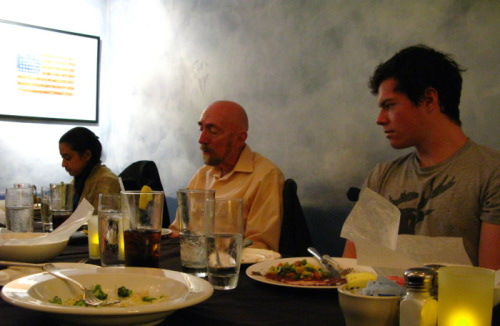 I had the yucca mashed potatoes and grilled shrimp. In case this is of interest to anyone here, Kip had the salmon burger. 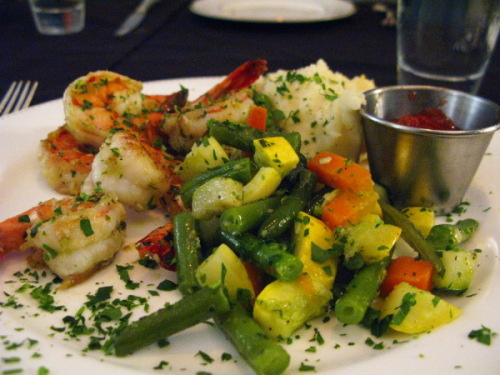 Finally, the night ended when I brusquely handed my camera to some random guy exiting the hotel, upon whom the SPS president politely forced the task of taking the following photo. Notice how everyone appears happy and grateful except for the one person who appears happy and slightly uncertain whether she will ever see her camera again. 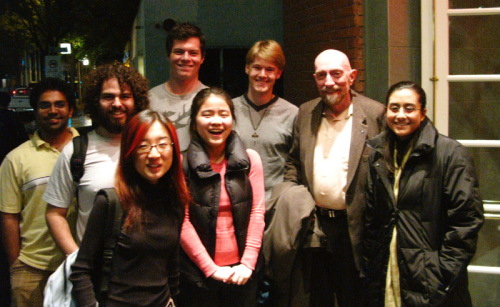 Another day, another once-in-a-lifetime experience.

42 responses to “A Brief History of Thursday”