Questions, answers, and Sam's face. This is the real MIT.

So classes started last week, which means IAP ended, which means the conclusion of my EMT class and random dinner parties with friends. About halfway into IAP, I wrote Sam with the intention of stealing his infinite wisdom regarding all things MIT and also possibly his blogging prowess. I disguised this stealthily, however, by suggesting we grab dinner some time. This ended well for both parties – with a PARTY! Pun totally intended. 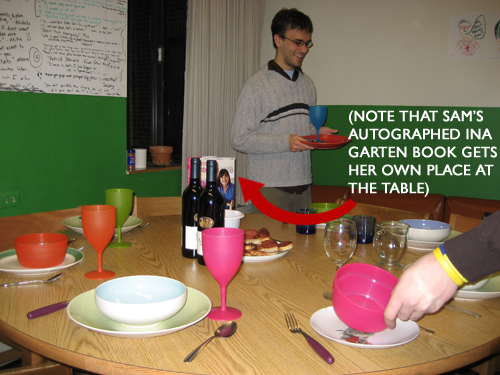 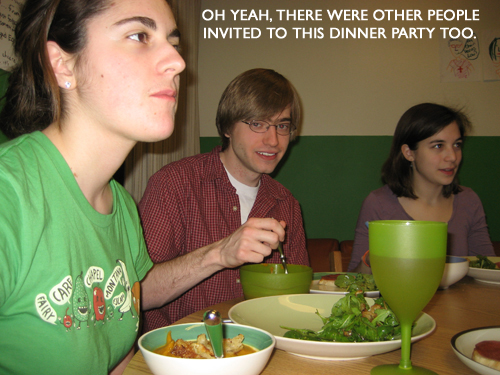 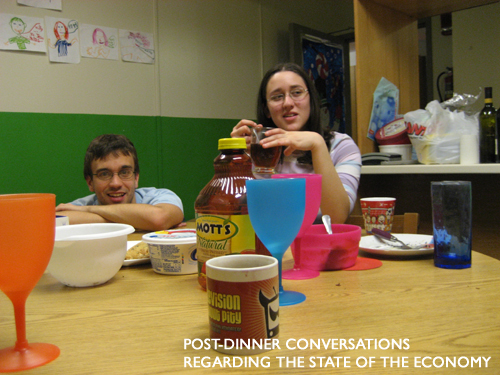 Zaira ponders: What type of laptop should I get for college? On on side I can get a PC with tons of programs, downloads, familiarity, and ‘cheap’ prices. On the other side, I can get a Mac with it’s super cool OS, interface and capabilities. What should I do?
Snively responded: I’m gonna say that Windows Vista is going to look very Mac-ish when it comes to OS, so I plan on just sticking to Windows, far superior. Although, Marilee was def using a Macbook for her info session so I know that Macs have quite a following at MIT. But, if it’s simply an OS preference, Vista should take care of that.
Ritchie also pondered: You’ve had a Macbook for a few months, right? How well has that worked out for you? I mean, I think I will end up getting one but I just want to make sure I’m not going to have major problems or incompatibility issues with required programs and stuff before I throw $2,000 into one lol.

I went to Cape Cod the weekend before term started and forgot to bring my laptop charger. This, however, was not an issue because all six of my friends I was travelling with brought their respective MacBooks, MacBook Pros and PowerBooks – we took a moment while on the road to marvel at the realization that there were seven Apple laptops in the car. I switched to Mac right before I came to college, after being a dedicated PC user for probably about 15 years, and honestly haven’t looked back – even when I went home and tried to use my old desktop. Dedicated doesn’t mean I didn’t enjoy my fair share of the 114,000 known PC viruses over the years, none of which are an issue for Macs.

While it’s true that some programs that I used to use on PC are not available for Macs, it’s usually not hard to find a substitute that’s often even better than the original – especially at MIT, where there seems to be a pretty even split of Mac and PC users. And if you have a program that you absolutely need that only runs on PCs, you can use BootCamp on your Mac to run Windows. Windows Vista, too. Also, just because Windows Vista LOOKS Mac-ish, doesn’t mean it IS Mac-ish. It’s just the better choice.

(Yeah, Apple’s really not paying me for any of this; I just really like my MacBook.)

Manisha is just wondering: Hey, I was just wondering… is Aditi from India? How many Indians were admitted to MIT for the class of 2010? Do graduate/Ph.D students get an IAP?

Aditi is from California. At this point, MIT doesn’t release admission statistics by country, but 110 international students were admitted overall last year. And yes, graduate students get an IAP; one of the students in the EMT class I took was a GRT (Graduate Resident Tutor, often called Residential Advisors at other schools) from my dorm. IAP is observed by all members of the MIT community.

Trevor complains: Of all the things you can write about, you tell everyone that I love “A Lot Like Love.” Thanks Jess.

Trevor is a fantastic web designer with really good taste in music (whose favorite chick flick is “A Lot Like Love”).

Farhad scrutinizes: I just realized a few months ago I want to attend MIT, I’m not a U.S. citizen or anything like that. I think I can do pretty well on the SATs and even improve my grades, write some nice and honest essays and have my intervew. But I’m worried about extracurricular activities… I think I don’t have much of those… I play chess, for example, don’t know if things of that kind count, but that’s not like the science club or something. I have done many different things and activities, but many of them by myself, so i don’t know if that counts too. Also, schools over here don’t promote lots of activities… So it’s kind of hard to participate in a math olympiad or something like that. If anyone could help me with that I’ll be very thankfull.

I get a lot of these questions, so I thought of a metaphor to help you remember. The other day my friend and I had this conversation:

Now, this sounds really awkward and like something that I would not want my mother to read, which is even more awkward because my mom IS reading this. (Hey, Mom.) But I don’t mind, because the conversation was about starting a project together; he thought we’d be good business partners and could get a lot accomplished working in conjunction while I wasn’t so sure.

So yeah, the admissions committee does take context into account. At the same time, just because your schools don’t promote the activities you’re interested in doesn’t mean that you can’t actively seek them out yourself, or create them. It can be difficult to find people who share similar interests or want to support you, but the outcome can really be worth it.

Iteloo also answered this one pretty well: don’t worry about it. I believe MIT takes the context into account, and plus, if you are good this way then why try to find things that you might not enjoy doing just to impress the adcoms? Just remember to tell the them in ur app the things you do (by yourself or with a group) and things you are passionate about, or else they won’t know it.

That was a lot of questions. Anyone getting bored yet? Here’s a picture of Sam making a face that is apparently copyrighted by some guy: 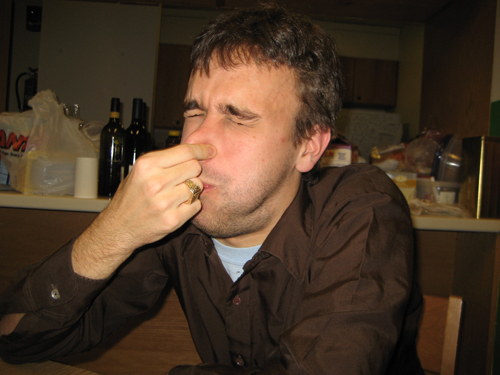 Anyway, more questions!
Kelsey K queries: Only 3 Oregon kids?!?!?! That kind of scares me. I’m from Oregon, I’m applying next year, and that’s not a lot of people!!! So, does MIT have any limits for how many people they admit from different states? Also, the school I go to is really small (~350 students serving 2 towns) and we don’t really have advanced classes. No Honors, AP, or IB. Basic Chemistry is considered an advanced science class. Is this going to affect me at all when I apply? Also, I’ve taken a lot of Agriculture classes, and am really involved (and when I say really involved, I mean that it’s pretty much my life…) in FFA. Is there anything at MIT that deals with Agriculture? And, how will that be looked at when I apply?

They also know that there are HUGE differences between individual high schools. When they review applications, they don’t simply count up “advanced” courses taken by each student; they evaluate you in your own context. So if you took advantage of the opportunities that were available to you, you will be on the same level as someone who had more (or less) opportunities and also took advantage of them.

If agriculture is your thing, then by all means include as much of that as possible in your app. MIT wants to see your dedication to the things you believe are important.

Also true. See my context metaphor from above. These are classes we’re talking about and not extracurriculars, however, so not having AP classes could definitely affect you in that they do give you a basic knowledge to build off of at MIT. People who take AP classes are not only admitted because it shows they have the initative to handle those classes (which doesn’t apply to you as much since they aren’t offered), but also that they have a good foundation in math and sciences, which is necessary to survive here (which does apply to you). Are AP exams offered anywhere in the vicinity? You could study for them on your own, or get a teacher to possibly tutor you – because I know for me, at least, AP Chemistry was instrumental in my passing 5.112.

Demonstrating your love of agriculture to MIT would definitely be a good idea, since it’s such a huge part of your life, so I imagine it would be looked upon favorably when you apply. But if you’re looking to go into agriculture specifically, this would be an issue because it’s not a part of any department here. I checked with Matt who said, “MIT is not for everyone, and MIT doesn’t try to do everything. We do try to be really good at a limited number of things. So, we have no fashion design, no forestry, no kinesiology, no ancient languages, and, yes, no agriculture. Closest we have is maybe biology.”

Bhushan requests: Do you call Regular applicants toooooooo
turnef also requests: Will you call the accepted students with regular decision?
YEAH! Sit by your phone eagerly and wait. Not really, but yeah, expect a phone call from us at one point. We know where you live.

Solomon queries: Jess can you really describe the showers in detail. Is it a large room with no dividing walls like what I used to have in my boarding school.
Solomon also queries: Is it allowed for couples to share rooms with each other. I am a bit confused.
All showers on the MIT campus are individual, so no, there are no large shower rooms without dividing walls. At the very least they have dividing walls; at the most they’re different rooms entirely. And no, couples are not allowed to officially register rooms together.

andie asks: What were the things you wished you did during your senior year to prepare for college? I am trying to get ready for college and perhaps trying to see if i could challege myself in some way. Any advice?

andie, I personally tried to enjoy myself as much as I could while still maintaining my grades. It’s probably the best preparation I can advise, since college is hard, and it’s really important not to burn yourself out. I wrote more on this subject a few weeks ago.

Hope you got the answers you were looking for. Leave another comment if you need clarification or send me an email at iamjkim at mit dot edu. For now, I’m as tired as Sam was after he finished making that colossal dinner, so I’m going to go lie down. 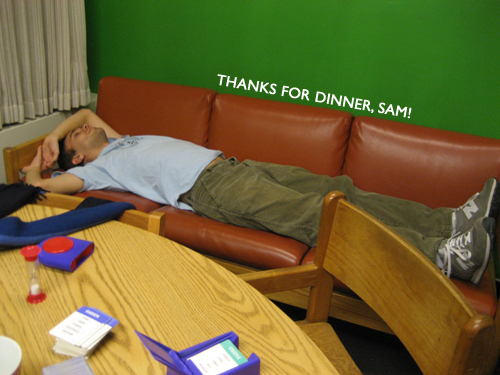