In case you are like me and still feeling somewhat Christmas-y – maybe it’s that I keep listening to Christmas songs, maybe it’s that we never take down our tree until about July – today I bring you photos and videos from our fall Rambax concert, and a special Christmas-related performance that occurred shortly after. Rambax is MIT’s best (and only) Senegalese drumming (sabar) ensemble that began almost a decade ago, and is led by master sabar drummer, Lamine Tour√©. It’s also sponsored by Professor Patty Tang, who did her PhD in Senegal while studying sabar and has published two books on West African music.

It’s also RIDICULOUSLY fun. Imagine banging on a drum with a stick. Now bang on your imaginary drum with your hand. Now combine it. See how much imaginary fun you’re having? I thought so. (The other fun part is playing different beats in sync with 30 other people, and really getting into the groove – but mostly the banging-on-a-drum-with-a-stick thing.)

Not only that, but our three hours of practice a week count as a class (21M.460), open to just about anyone with some sense of rhythm and a desire to rock out, so we get 6 units of credit per term – just to bang on a drum (well, learn different rhythms and techniques)(but mostly, bang on a drum) for an extended period of time every week. That’s about half the credit of a normal MIT class, but it’s more than twice the fun – and probably relieves a good fraction of the stress accumulated from the more typical MIT classes, so it works out.

Our fall concert was held in early December, not long before finals, in the student center. We arrived a few hours early to get ready, try out the acoustics in our new digs, and get decked out in the fancy shirts Patty had accumulated from her time in Senegal: 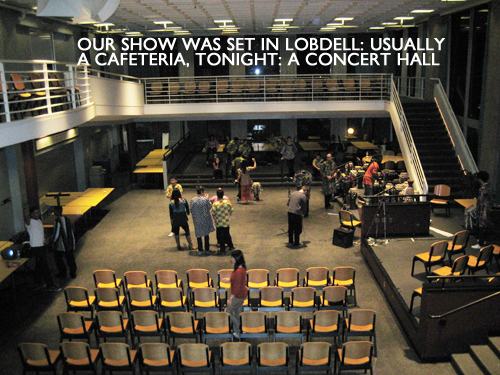 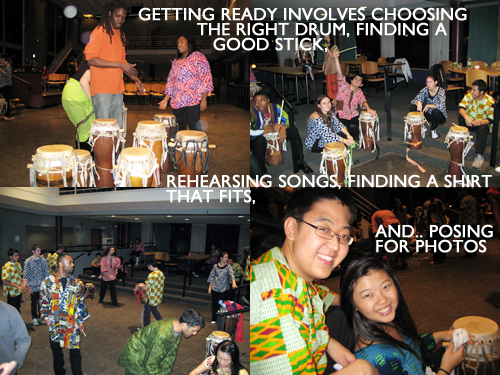 One thing I forgot to mention – Lamine is actually a total badass. In fact, shortly before the concert I made this flyer advertising his incredible drumming, superior dancing talent, and skillful crowd-raising ability (read: badassness) to get more people to come to the show. One of the greatest benefits of coming to a university like MIT is that it tends to attract some truly incredible people, and Lamine is one of them. His impromptu solos during our rehearsals and performance, sense of humor and rich singing voice never cease to amaze. Also, his luxurious black dreads. 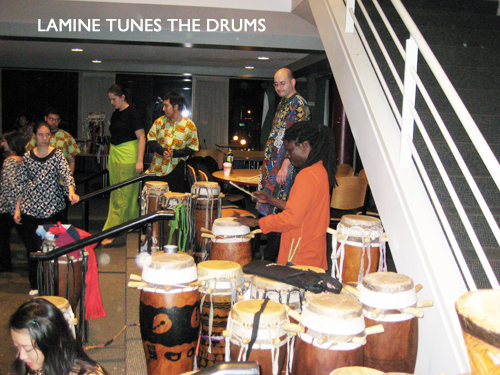 The last part of our performance was a small subgroup of dancers, all of whom were drummers who just decided to put in some extra time to learn some Senegalese dance moves, and pulled off a spectacular performance despite having only about five rehearsals: 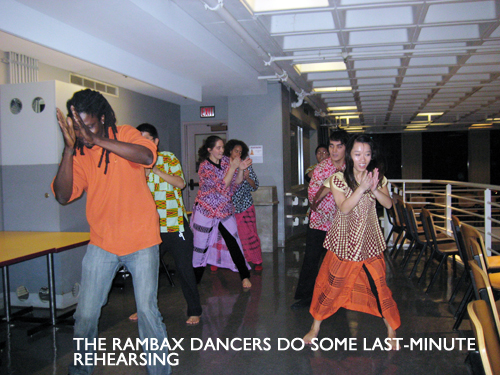 This is, unfortunately, where all my media stops: I was playing for the rest of the night and, as it turns out, it is rather difficult to take photos and videos while you are banging out songs on a mbung-mbung. My sister took one photo of the performance, which unfortunately doesn’t quite capture the scale of the group – pictured here are about half of the drummers, mostly all MIT undergrads or affiliates minus Lamine (pictured in the center, dancing away in the center with his drum): 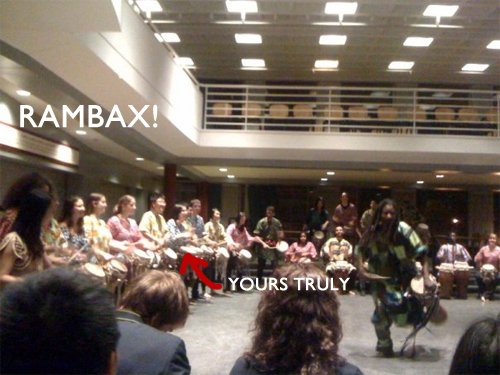 Since a photo can’t really capture the epic scale of sabar (and especially how loud sabar is – let’s just say there were a couple of noise complaints), however, I do have a couple good videos, all filmed by Rich ’10, another Rambax drummer. Here’s a short clip of us rehearsing before the show: No songs from the actual show, though I can tell you it was the most fun I’d ever had playing sabar. Lamine totally worked the crowd by dancing, playing, and singing throughout the show, getting the audience to sing or get up and dance along, and teaching them Senegalese phrases like “waaw waaw” (literally, “yes yes”, often said in approval of a particularly good solo). Shortly after our drummers played, our dancers took the stage: Patty and Lamine also brought in a wealth of guest performers – Lamine’s cousins from Senegal – to join in on the show and show off their mad drumming/dancing skills. To my knowledge, most of these performers are improvising their moves; and the chair at the end was definitely occupied prior to being sat upon: Though the end of fall term is rife with concerts of all types of performing arts – dancing, a capella, orchestral music – ours was truly unique in that the evening finished with what was essentially a giant party. All drummers came together – Rambax and guests alike – to stand and play while the audience danced (or at least attempted to) around and throughout us: Which brings us back to Christmas – a week or two after the concert, Patty emailed us to announce that we’d been asked to play for NPR’s Marketplace Money, for a Christmas special on how much it’d actually cost to buy all the gifts mentioned in “12 Days of Christmas”. You can read the transcript of the broadcatst, as well as listen to a small group of us playing, as the twelve drummers drumming – fourteen, to be exact – at the end of the piece here: Is a partridge in a pear tree affordable?

(Patty noted that, in fact, we would cost nothing to hire since we don’t charge anything, and it would be somewhat irrelevant to send someone twelve or fourteen drummers drumming sabar on Christmas since most people in Senegal are Muslim.)

Regardless of whether twelve or fourteen sabar drummers are relevant to your religious beliefs, however, I hope your holidays were happy ones!