Ratification: The Story of the US Constitution by Chris S. '11

If you are at all following the news, you’ll know that the US Congress just raised the debt ceiling, after a protracted deeply partisan debate.

Just like every political debate, the “Constitutionality” of adjusting the debt limit was brought up by various legislators. Sen. Schumer (D-NY) suggested using the 14th Amendment to the Constitution as a legal requirement for the government to continue paying its financial obligations. In response, Sen. Cornyn (R-TX) dismissed the idea as “crazy talk.”

So how does this document, well over 200 years old, continue to shape US politics?

Professor Pauline Maier, a history professor at MIT, published this book last year. I wrote about the book when it came out last year.

Since then, Prof. Maier’s book had gone on to win:

It is also available prominently at major booksellers like the soon-to-be-history Borders: 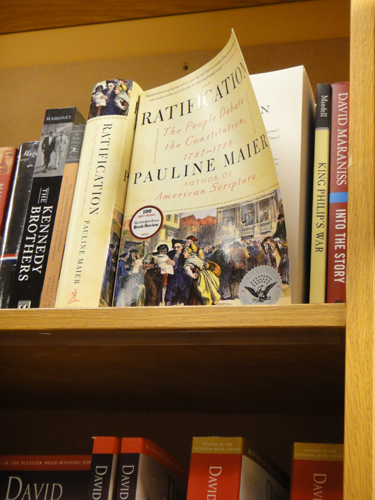 When I visited Borders last week for their liquidation sale and saw Prof. Maier’s book, I knew I had to get it. Having spent a whole semester poring over the intricacies of the debate surrounding the ratification of the Constitution, I wanted to see how Prof. Maier crafted her argument (she was putting the finishing touches on her book when I took her class Spring 2010).

To my (perhaps unmerited) surprise, the book reads exactly the way she lectures – the storytelling discussions that the six of us had come to know so well after working with her on Tuesday and Thursday mornings for a whole semester. In the opening introduction to the book, Professor Maier compared the fervent discussions and debates that occurred in taverns and private homes during late 1780’s over the ratification of the Constitution as similar to the “American obsession with the final games of the World Series,” and this analogy perfectly captures the sentiments of early US politics.

In class, Prof. Maier invites students to dissect tracts and treatises written by the early proponents and opponents of the Constitution to painstaking detail, while providing the enthusiasm of a sports commentator narrating a play-by-play analysis of a nail-biting game. Prof. Maier doesn’t make the class too easy – she skims over providing “right answers,” but instead challenges students to reach their own interpretations of the documents following careful individual study the night before. I must admit at times the reading (almost always over 100 pages of dense 18th century convoluted English rhetoric every two days) was extremely tough on an already challenging MIT workload, but the class becomes several times more valuable if one had done the readings beforehand. Prof. Maier offers insights, asks probing questions, and supplements the reading with her extensive and vast knowledge of the ratification of the Constitution in the 13 original colonies.

Prof. Maier is also very humble, and likes to repeat, “if you found something interesting that I haven’t brought up, please make a note of it and tell me! I’ve been though these documents dozens of times but every time I go through them again with you guys, one of you – being astute MIT students – would often bring up something interesting that I failed to notice before.” Taking her up on her offer, I pored over many of the pamphlets in great detail and made careful notes and observations, only to discover that Prof. Maier had already been there and reached the same conclusion that I did wayyyy before.

It was truly an honor to have had a class of six with such an eminent scholar of US History, and more surprisingly so as a student at MIT.

4 responses to “Ratification: The Story of the US Constitution”