Reuse, reduce, recycle, remember not to leave junk outside your door.

List of Rejected Halloween Costume Ideas, 2008 Edition
1.Washing machine: Unfortunately, someone fixed the perennially-malfunctioning washing machine in Random Hall’s basement, so I couldn’t wear it. Thus, my intent was to create an political statement about the troubled state of Random Hall’s laundry administration was thwarted. Footnote: check out our laundry server for the latest news on conditions in Random’s washers and dryers. It’s like the CNN of laundry.
2.My physics class: I had physics on Halloween. Had I used this idea, my physics class would have become a set that contains itself, which would have caused mild distress to Bertrand Russell.
3.An inflection point: Too hard.
4.The Mohs scale: Too hard.
5.My own center of mass: I felt like this would have been too selfish of me.
6.The Infinite Corridor: Otherwise known as a bustling, oft-clogged artery of MIT life, the Infinite Corridor from 9 AM – 5 PM every weekday is 251 meters of hurrying students, organizations selling/giving/brochuring for charitable causes, occasional jugglers, bake sales, and haphazard posters hawking upcoming events on campus. No way could I have done it justice, at least without growing several extra limbs.

Although, the Infinite at the glowing hour of 8 AM is immensely photogenic: 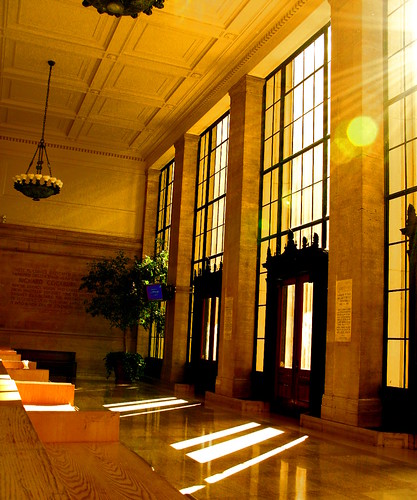 Note that I couldn’t have taken these photos at a later hour without being mistaken for a tourist. 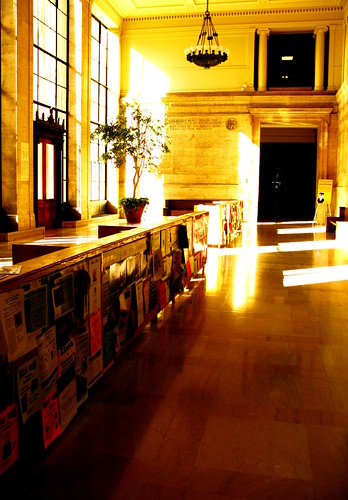 1.An admissions blogger: Except that 15 +/-8 people at MIT were already doing this one for Halloween.

After much deliberation, I came to a decision. Unfortunately, this decision was to study for my upcoming exams, and so I was several inches short of prepared on the eve of the MIT Concert Band Halloween Concert last Tuesday. I’m also several inches short of tall people like Snively and Chris S., by the way, but this has nothing to do with how Tuesday managed to slip into the slender crack between a chemistry test and a biology test.

So at 4:00 PM on the eve of the eve of the eve of the eve of Halloween, I chose to execute a feat of x-treme laziness. As you may recall, a few weeks ago I proposed writing a post about Collecting Junk at MIT, which was inspired by an episode in which I spotted a motorcycle rearview mirror lying by a parking meter on Massachusetts Avenue. At the time, I was making my way past the daily parade of Cambridge traffic to an early morning class (early = 10 AM), when suddenly I remembered that I had broken my mirror a few days before. What the heck, thought I, a wave reflector is a wave reflector. Into my backpack it went.

Hardly was this inconsistent with the Way of Things at MIT. Cheapness is a nirvana, and the road to enlightenment is lined with random junk that your roommate will throw out.

For the frugal soul, salvation comes in the form of [email protected].

Reuse is an MIT-exclusive mailing list with thousands of devoted followers, both students and (dare I say) faculty. Each day, dozens of posts appear in one’s inbox, rippling with mirage-like promises of free (free!) CRT monitors, unopened cereal, derelict bookshelves, the occasional functioning printer, cookware, chocolate*, giant metal fish, and plenty of other gifts from people who have decided to relinquish the trappings of material life. Most of these emails run along the lines of “Free ___ and ___ at (some place within a 5-minute run); take and post”. Without fail, someone within 20 minutes will have adopted the duty of turning the useless into the reuseless. Certain items, if successfully retrieved, will lead to the sort of stories that you will someday tell your grandchildren as you gather by your solar-powered fireplace and complain about global warming.

-I mentioned before that during orientation, I staunchly refused to buy any edible matter, to the point where I was at dire risk of starvation by oatmeal on a certain forsaken night. At this dark hour, my roommate spotted a Reuse post of pre-packaged Indian food and high fiber cereal at 3 AM in the morning, and I survive to this day.

-Legend has it that when the Stata Center was built, the building that formerly occupied its site was put on Reuse. Several people actually dismantled parts of the building and kept them, which is why the Pika living group contains a bathroom with a metal door from one of the labs (a laboratory lavatory, if you will).

-On the morning of the Orientation Closing Ceremony, in which all the freshmen gather on the steps of Killian on the last day of orientation in order to be photographed and immortalized in the history of the Institute, I opened my email and found a post of various furniture and rugs in a residential neighborhood a few blocks away from Random. Needless to say, my roommate and I ignored the fact that the ceremony was in half an hour because we were in excruciating need of a rug on that day. There’s nothing quite like the thrill of hauling two Ikea bedside tables down a busy street in the middle of a swelteringly sun-drenched Saturday morning as you wonder whether your descendants will ever know that you attended MIT because you missed the freshman photo for the sake of some furniture and a broken umbrella. Actually, we ran fast and still made it into the photograph, although not as attractively as one would hope.

-Alright, I confess that I developed a Reuse addiction back in the blissful days before the sunset of September 3rd, innocuously dubbed the First Day of Classes. Fondly do I remember ditching my friends in New House at 11 PM to sprint past Dorm Row, down the Infinite Corridor, and through the moonlit lawns of East Campus to assert my dominance over a coffeemaker and a mouse-friendly mousetrap, neither of which were ever used. My friends still supported me, though.

-**Donald Guy’s Mom, if you happen to be reading this, you might want to skip to the next bullet point**: On the subway last weekend, Donald Guy ’12 started talking about how he too recently looked into the vacuous eye of collegiate starvation, thanks to his unwillingness to get out of bed and buy groceries. Just as his hallmates were becoming concerned, Donald saw a post for a working LCD monitor on Reuse and immediately ran down Massachusetts Avenue to the MIT Museum to retrieve it. Tragically, someone else had claimed it moments earlier. The irony is that the grocery store was right across the street from the MIT Museum.

-On the morning of my chemistry exam, as I groggily clicked on an email from the course administrator for 3.091, I was half-expecting a faceful of “Dear Students, after much consultation, we have decided to test you on additional topics in advanced solid-state chemistry. Part CXVI of the exam will require construction of a functional spintronic device, so please bring screwdrivers and refrain from wearing magnetic jewelry.” As it happened, the email was actually sent by Reuse: at 9 AM on exam day, my course administrator was (I kid you not) giving away a box of free truffles in her office to strangers on a mailing list that contains practically all of MIT. Minutes later, I got a follow up informing me that the chocolates had been taken.

-For weeks, my roommate and I searched diligently for a sofa on Reuse, since we had a bit of extra space in our room that was screaming to be filled by a sofa. Attempts were numerous, results were none. Anyway, the story of the sofa that now graces our aquamarine quarters involves a midnight cross-city scavenger hunt hosted by Theta Xi, an alley, an effort to find something “big and useless,” a car door accidentally slamming into my hand, a popsicle, a van, Mexican food, capture-the-flag in Boston Commons, and a lot of bleach. However, this story does not involve Reuse and doesn’t really belong here. I’m not sure it belongs anywhere.

So, back to Halloween, which was a week and 700 words ago: finding myself costumeless on Tuesday night, I pulled together a cardboard box and a printer, grabbed a sack, and scoured the dorm for useless objects. The result? Think outside the box. 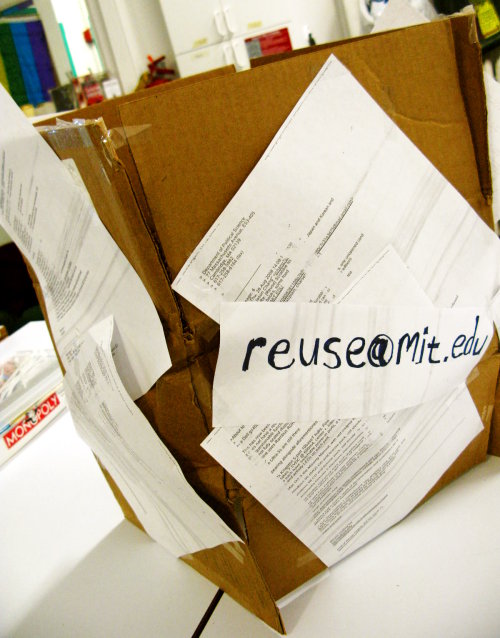 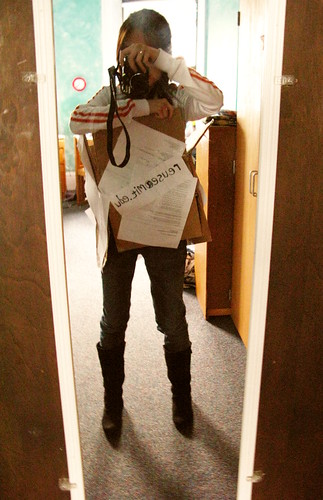 Quite literally, I dressed up as a piece of junk. As for accessories, I opted for more junk. 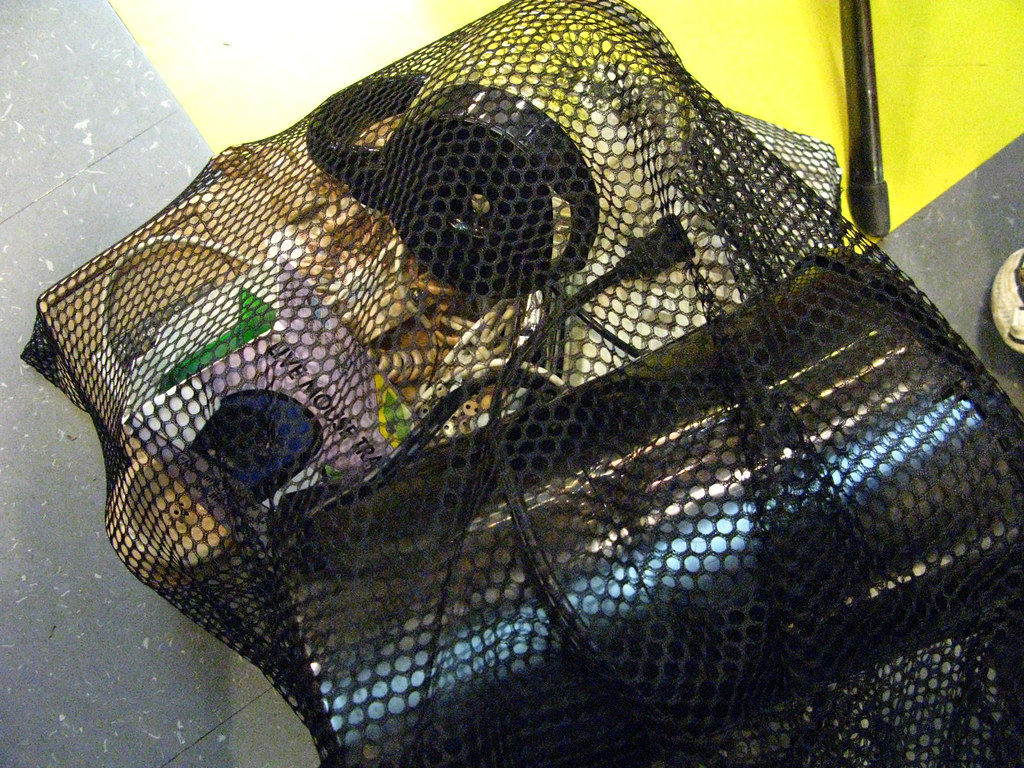 (Note the mousetrap and coffeemaker, both of which were the dubious trophies of a Reuse hunt.)

For the sake of authenticity, I had to haul around a bag of reuseful items for the entire night. The life of a mailing list is an arduous one indeed. 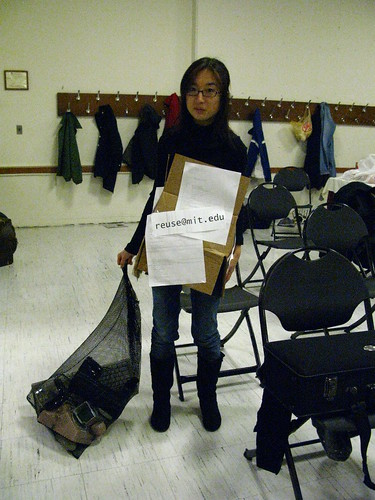 Upon my return to Random, I dropped the box outside my room and commenced studying biology until midnight faded into a distant road sign on the highway to Wednesday. Apparently, I never remembered to move the box inside, so the janitor threw it away 8 hours later under the impression that it was an actual piece of junk as opposed to a piece of junk representing other pieces of junk (a piece of meta-junk, if you will). Since this would imply that my costume looked too convincingly like what it was supposed to be, I chose to interpret this as a compliment.

Which is why I didn’t have a costume on Halloween.