Hrm, ok. Let’s pretend everything is seven or eight days ago so that I can write about this as if it happened last weekend.

[Begin Time Travel]
(^ one of my many talents — surprise! And yet another something that’s probably only offered at MIT.)

No school is perfect. At college and in high school, you get occasional weeks where things just don’t line up properly; your workload is far more than you’re used to or should be used to, and things hit you one after another. Last week, I had three midterm tests in three of my classes, and an essay due in my fourth class. All of this happened within four consecutive days.

I got through it okay, and emerged at 6AM Saturday morning (okay, the essay was a small number of hours late…. whoops) tired and ready for a break. At that point, I’d already received most of my grades and was no longer thinking about the results of the tests; I was just concerned with relaxing for the weekend before diving back into the school routine. Fortunately, we had a three day weekend.

What does this mean?

It means it’s a Jewish holiday! Oh, wait, no it doesn’t. I don’t get those days off from school anymore. Okay, so it’s Columbus Day. Same thing, to non-Jewish me. (Sorry if I offended any of you devout Columbus followers with that last remark; hope you all had a great Columbus Day! Spoiler alert: he discovers America.)

Ok, let’s try that again: What does this mean?

It means you have a long weekend in which to get away from MIT! (Something that all you young folk and eager applicants may not want to do, but probably will want very much once you get here. Everybody needs the occasional vacation from MIT’s ridiculous workload.)

Since we knew a three day weekend was coming up, my friends and I tried to plan something fun and off campus. However, many people had fraternity retreats — I think many of the fraternities had retreats that weekend. Lame, right? (Just kidding — I have nothing against fraternities. However, I decided this year that joining a fraternity would not be a good fit for me.) Anyway, with all the fraternities away on retreats, all of us non-Greek-life students (hence the title; yeah, I apologize for that one) were stuck on campus. This left us with only one good option: make our own retreat!

One advantage of being a local: I can go home to get things. Sometimes that means I can go home and grab my winter jacket and an extra pair of pants, but this weekend it meant I went home on Saturday night and borrowed the car. 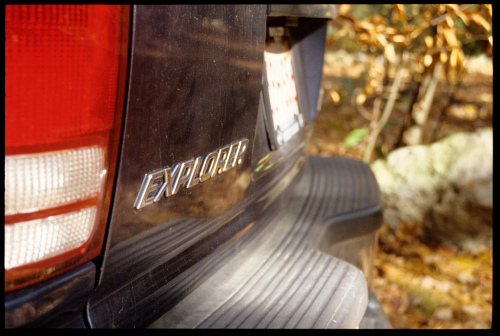 Meet Lucy, my wonderful 11-year-old Ford Explorer. Note: this picture is not from this weekend.
(Fyi, the 1998 Ford Explorer is the best car ever made.)

Somehow, on Friday night, we decided that we would go to Cape Cod on Sunday for a picnic on the beach. Cape Cod is one of Massachusetts’ more popular vacation spots, with a slew of beaches and overpriced stores. As a local, I’ve been to the Cape a number of times, so I was confident that we could get down there and back in a day. After some asking around and browsing google maps, we decided on a trip out to Sandwich, MA for our mini-retreat. Saturday night we went to Shaw’s and bought food for our picnic. We ended up with a healthy helping of pasta, a sadly bimodal fruit salad (in which I imply that fruit is a continuous spectrum?), chips, salsa, and — for dessert — pumpkin bread and milanos. Add some apple cider and cream soda to the mix, stuff it into a small dorm-sized mini-fridge for the night, and you’ve got yourself a wonderful vacation in the making.

Sunday morning we planned to leave at 9, which meant that we all woke up just before 9 and hit the road by 9:30; however, traffic wasn’t bad and we still found our way down in about an hour. 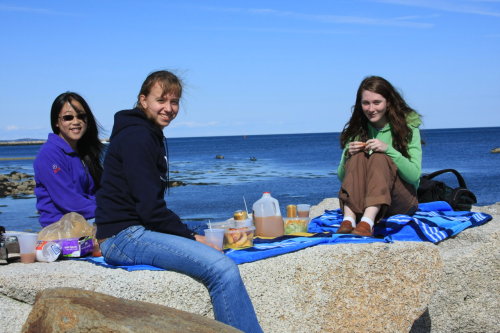 Christie, Michele, and Erin enjoying (or at least pretending to enjoy) our mid-October picnic on the beach. 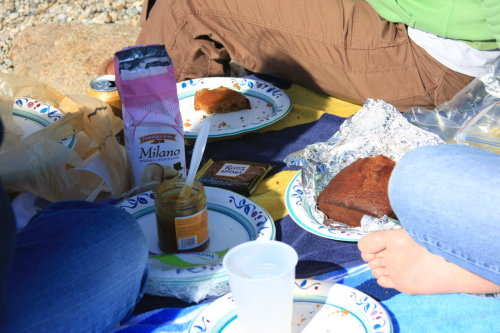 This entry peters off a bit here, because we didn’t do anything particularly exciting once we got to the beach; it was just relaxing, which was the point of the day. I, as an amateur photography dork, took some time to play around with my camera (the amazing Canon EOS 40D, for all you other nerds), leading to the artsy portrait shots below; other than that, we mostly ate, skipped rocks, and relaxed. It was as any good vacation should be — relaxing, and not too much more.

I took a lot of time taking pictures, so I’ll just bombard you and let those speak for me. (The blogger’s excuse to be lazy and fill up a lot of space) 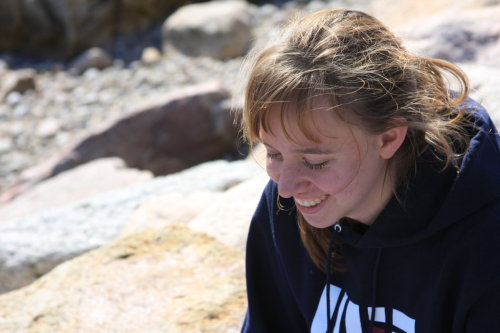 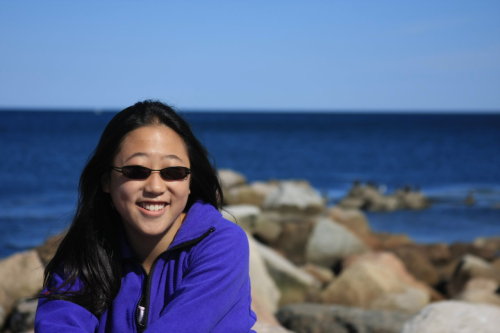 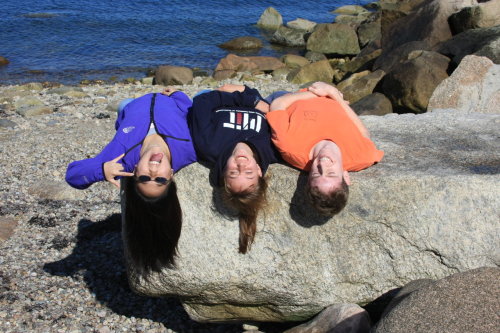 “Relaxing”. Erin, thanks for the camerawork :)

And then it was time to leave. 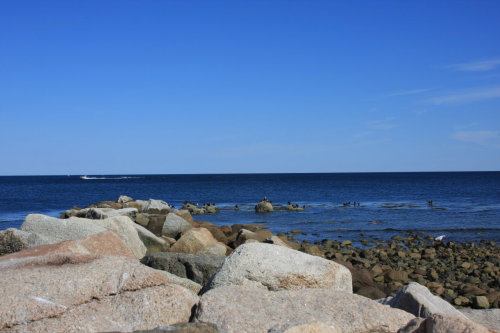 Goodbye rocks, ocean, and awkwardly shaped birds (we had no idea what kind of birds they were).

We made one stop on the way home; three or four minutes away was the Sandwich Glassblowing Museum (in fact, one reason for our choice of picnicing in Sandwich. It had nothing to do with the foody name of the place). I took a whole bunch of pictures, but showing you them would probably ruin the point of going to the museum — it’s really visually impressive, and is a nice walk-through for $5. I’d definitely recommend it. We skipped out on the glassblowing demonstrations that occur every hour on the hour, because we’d all seen it before.

Oh, score! A connection to MIT. I guess I’m at least kind-of writing about the right thing here, right? Accidentally doing my job, lookit that.

All of us were in the same FPOP — Freshman Pre-Orientation Program. These programs bring students (I think over half the freshman class enrolled in FPOPs) to campus (or elsewhere, like Yellowstone — any blogger in that one, want to write about it?) four or five days early for something a little like summer camp. For most of the day, you’re with your FPOP. The FPOPs are led by a group consisting of faculty and students in a certain major, and it is their job to take a cadre of bright-eyed, bushy-tailed freshmen and to simultaneously introduce them to MIT and to a major. We all enrolled in the DMSE FPOP — Discover Materials Science and Engineering (Course 3, since we number our majors here) — which meant that our days were filled with tours of course 3 labs, lectures from famous course 3 professors (and an awesome grad student or two), explorations around campus, and excursions into Boston. One day, during our FPOP, we went down to MIT’s glassblowing lab for a demonstration: we got to see them blow and roll beautiful glass pumpkins for their annual charity event. Following that, we got to try our hands at blacksmithing (gee, where have you heard about that before?) and metalcasting; all told, it made a very convincing case for course 3.

Anyway, long story short, we’d already seen a glassblowing demonstration and so decided not to hang around for another one in Sandwich. 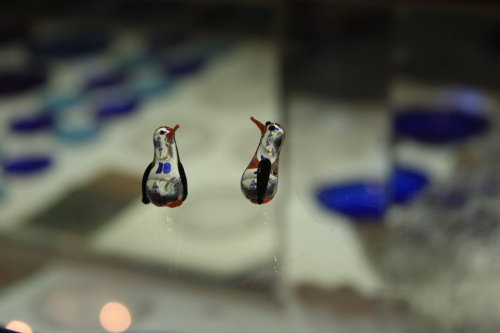 I bought a glass penguin. w00t.

By 6:30pm, we were back on campus, and all promptly went back to our dorms to nap for several hours.

Also, note how I just barely manage to stay on the front page.