It’s been over two weeks since I last blogged, and I’ve been working on this post alone for the past six days. Most of it, I’ve been writing in my head…forming the words, stringing them together like jewels on a necklace, trying sentences and paragraphs on for size, then discarding and reweaving them until they sparkle and sound just the way I want them to.

Poetry, prose. Prose, poetry. Sometimes I think there’s not a whole lot of difference. Sometimes I know that they are worlds apart.

I wrote a fair bit in high school. Poetry, mostly, with the occasional short story or narrative. Since coming to MIT, I’ve had far less time to dedicate to my writing than I really would have liked, which is one of the reasons I’m leaning towards taking more writing classes for my HASS concentration. Mostly I put my literary energy into blogging instead – although I’m hesitant to even mention creative writing and blogging together, since they’re such very different genres, arguably even mediums, of writing – each with their own advantages and limitations.

I can’t just make things up when I blog, for one thing. :)

I don’t know how many of you reading this are writers or bloggers yourselves, so perhaps the past few paragraphs didn’t make a whole lot of sense – my apologies. But my point is that it’s taken me a while to get my thoughts down on paper (or motherboard, as the case may be), partly because sometimes other, more interesting thoughts march inside my head and demand to be taken out and allowed to shine, which is basically the cause of those past two paragraphs of digression. Also that hyperlink.

Last week, during finals, a bed spontaneously appeared in the student lounge off of the Infinite Corridor. 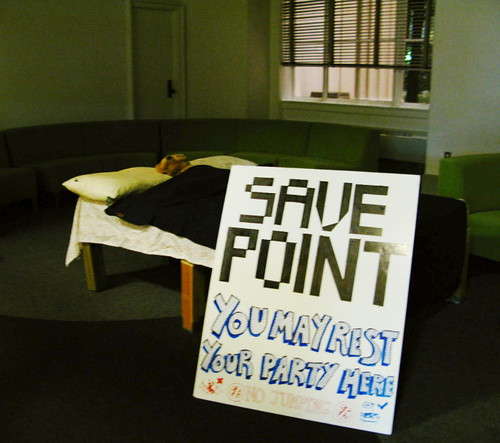 For some reason this hack struck me more vividly than pretty much any other hack pulled this semester. Part of it is the simple fact that it appeared during finals week, when everyone is at their most hosed, most stressed, most sleep-depped – and yet still find time to put together amazing things. (Interestingly enough, two other hacks also occurred during finals time…)

And part of it is just the meaning of the hack. Hacks, in their purest form, are designed to make the viewer laugh – marvel – think. A lot of hacks simply make you scratch your head and wonder how did they do that? This semester’s Epiphany Toilet definitely falls into this category, as does the infamous police car on the Dome. Other hacks, while apparently simple, nonetheless just sort of stick in your memory like the chorus of some Top 50 song, and keep bubbling to the forefront of your mind when you least expect them.

For me, the Save Point hack was one of these. The simple phrase “You may rest your party here” remained embedded in my subconscious far longer than it should have, and it’s taken on new shades of meaning over the past ten days or so, as I finished up my finals and packed up my bags to head home after another long – but enjoyable – semester. And then I spent the next couple days sleeping until noon. :)

Winter break. A time of rest, recovery, recharging. Assembling one’s forces and laying plans for the future. Preparing for the struggles that are to come with any semester at MIT: the tiny defeats, the small victories. Finals, again, sooner than we expect: the last battle. And the cycle begins again each fall, with new faces and new names as another class of freshmen arrives.

I love talking to people. I love listening to their stories, trying to understand what makes them who they are, and why. Getting to know their passions, their hobbies, all their little imperfect and intensely human quirks. This is part of why I wanted to become an admissions blogger, so I could connect to the students who might someday become part of MIT. Because in the end, I truly believe that MIT is what it is today because of its students, this population of self-selected and self-acknowledged geeks, nerds, technorati, entrepreneurs, innovators – whatever label or labels you try and put on it, you will only come two-thirds of the way to the truth, in a Zeno’s Paradox sort of way.

Part of the MIT culture is that it tends to defy labels, anyway.

What am I saying, here? What is the point of this? Simultaneously everything and nothing. I am writing to hear myself talk, I am writing to reach out and convey a message that right now seems desperately important but might mean nothing tomorrow. “These people ought to know who we are and tell that we are here,” or something like that. So much of writing – and blogging, especially – is simply trying to find the right audience.

And as far as readership concerns, I really do think that numbers are not as important you might think. Even so, my audience, on this blog, is far larger than I would have expected. Originally I thought of myself as only ever writing for the prospective students – showing them what the school I love is like, and maybe helping them (you) through the maze that is the college admission process along the way. But over the past year and a half I’ve discovered a staggering other array of readers ranging from my old grade school teachers to the parents of my fraternity brothers – not to mention the other current students, who always provide useful perspectives and have this wonderful habit of pointing out things I otherwise would have overlooked.

I’m only human. Even on this blog, where I can say exactly and precisely I want, I ramble, I rant, I rave – because that’s part of who I am in real life, and I want to share that part of myself with you on this blog. Just because I go to MIT doesn’t make me any different, any less flesh-and-bone than you. If you cut me I bleed. I am not so old that I have forgotten how to cry. MIT has changed me, yes. But not maybe as much as you’d think.

Mostly, I think MIT has made me more aware of who I truly am, and of the person I always wanted to be. At MIT, hundreds of miles from my hometown, blissfully and terrifyingly torn apart from everything I used to know, I’ve been able to rediscover myself – all in the company of four thousand other strangers, classmates, friends who are making the same kind of journey I am.

Applying to MIT is its own kind of journey. And I think the real, fundamental purpose of this entry is to encourage all of you applying to MIT, all of you who will be getting that life-changing decision in March, to just take a moment and think. I remember high school, especially senior year: so busy juggling classes, SATs, extracurriculars, friends, and all the rest to ever find a moment for yourself. But you need self-introspection, sometimes.

Right here, right now: I challenge you to stop, think – rest your party for a moment. Create a save point for yourself. Think about how far you’ve come and how much you’ve accomplished. Break down the assumptions you’ve been carrying about yourselves, about MIT, about the world. There is so much more than you know, than any of us can possibly ever know. Humility in the face of the great unknown (including admissions decisions) is one of life’s greatest virtues.

As I write this, wondering where I should stop, I realize that the streets and sidewalks of South Bend are coated with a fine sheet of snow and ice, beautiful and dangerous at the same time. MIT is like that, too, in a way. And that’s part of why those of us who go here love it.

You have been warned.

23 responses to “Save Point”