Schedule + dilemma = most incompetent-sounding portmanteau ever

Three days before classes start, I woke up at 7:09 AM, ran 6 miles, discovered three new species of granola in an unexplored section of the pantry, preheated an oven to the wrong temperature in Fahrenheit but exactly the right temperature in Kelvin (on accident), took a partial derivative, tossed up a pan of granola flatbread, studied experimental bacon physics for six finger-scalding hours in preparation for an all-bacon dinner for 40 people, packed two suitcases, moved from pika into Random Hall, walked back to pika anyway, drank two cups of black tea, gave tours of pika’s revamped drawbridge-accessible treehouse, crawled onto the cold-tiled roof, and stared at the thick haze of light pollution overhead until I was stuffed with numbness and murky starlight. Lately I’ve been tracing a trajectory through the last week of summer that curves just short of preparations for the impending semester. Behold, the death of 3-month vacation heralded by this monstrosity of Google calendarism: 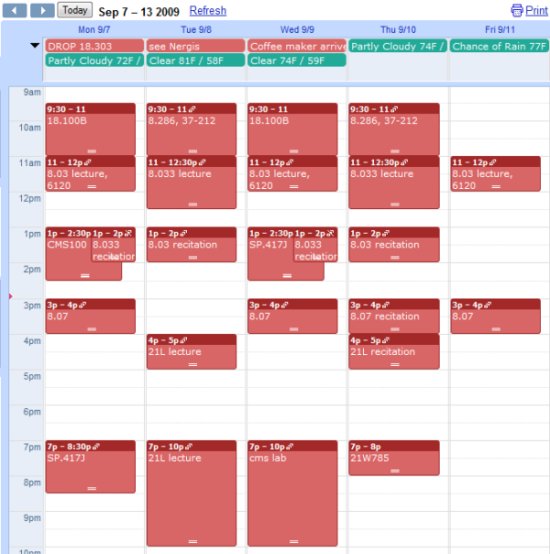 [See legend at end of post to decode course numbers.]
[Professor Nergis, whose last name is gentle to neither pronunciation nor spelling, is my academic advisor.]

This is my class schedule for Fall ’09. There’s eight courses spread over a 120-hour canvas; I’ll probably drop three of them so that I don’t go to bed weeping tears of angst every night. One of MIT’s masochist-friendly policies is that upperclassmen are free to register for every single class offered at the Institvte if they should desire a GPA of 0.2/5.0 or so. Conventional wisdom for the indecisive is that you should sign up for all the classes worthy of consideration and then progressively trim the fat from your course load until you can swallow your weekly serving of credit hours. For instance, my dilemma right now is choosing between 18.100B (Introduction to Analysis) and 8.07 (Electricity & Magnetism II). Tortured by a soul-ripping conflict between studying rigorous math and learning where MIT keeps its prodigious supply of educational solenoids, I turned to my ex-roommate, Katelyn (a devout math major who watches Jeopardy, not that this is relevant).

K: Math is the dressing that makes physics taste better.
Y: But18.100B is like mayonnaise. It doesn’t even go on the salad, unless the salad is potato salad.
Y: By “potato”, I mean “theoretical,” and by “salad,” I mean “physics.”
K: How do you know adding mayonnaise won’t help the taste of say, a lettuce salad? It may surprise you.
Y: Hey Katelyn. That sounds delicious.
Y: By delicious, I mean “gross,” and by “Hey Katelyn,” I mean “That’s the last time I ever invite you to a potluck.”

K: Your salad right now has too much lettuce. It needs garnish.
Y: Yeah, well, your salad isn’t even a salad. It’s like a condiment bar.
Y: If you’re taking applied math this term, maybe it has some tomatoes.

On the bright side, pika rush* coincides with the first week of school, injecting sunbursts of stressless creativity into a greyish schedule. Who can resist cheesemaking lessons on Registration Day, followed by an all-night Dr. Who marathon? Nobody, that’s Who.

*At MIT, the first week of school is reserved for fraternity/sorority/independent living group recruitment. Although freshmen must live on campus, the rush period gives freshmen the opportunity to explore non-dorm housing options for their future years at MIT as various living groups grapple to outsplurge each other on steak and lobster dinners to attract ramen-acclimated visitors. pika inexplicably prefers to shell out for esoteric items like granola and organic nut butters. Probably half of last night’s dinner budget was converted into pureed cashews.

My actual schedule for this week: 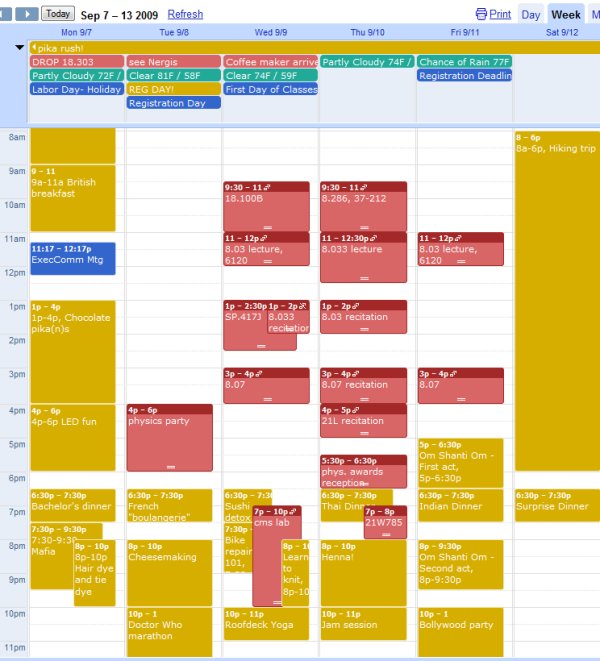 18.303- The classical partial differential equations of applied mathematics: diffusion, Laplace/Poisson, and wave equations. Methods of solution, such as separation of variables, Fourier series and transforms, eigenvalue problems. Green’s function methods are emphasized. 18.04 or 18.112 are useful, as well as previous acquaintance with the equations as they arise in scientific applications. [I dropped this class because of a last-minute lecture time change by the course administrators.]

8.286- Introduction to modern cosmology. First half deals with the development of the big bang theory from 1915 to 1980, and latter half with recent impact of particle theory. Topics: special relativity and the Doppler effect, Newtonian cosmological models, introduction to non-Euclidean spaces, thermal radiation and early history of the universe, big bang nucleosynthesis, introduction to grand unified theories and other recent developments in particle theory, baryogenesis, the inflationary universe model, and the evolution of galactic structure. [This, by the way, is taught by the infamous Alan Guth, who not only developed the idea of cosmic inflation but also applied it to the stack of papers on his desk.]

SP.417J- Intro to Black Studies. Interdisciplinary survey of people of African descent that draws on the overlapping approaches of history, literature, anthropology, legal studies, media studies, performance, linguistics, and creative writing. Connects the experiences of African-Americans and of other American minorities, focusing on social, political, and cultural histories, and on linguistic patterns. Includes lectures, discussions, workshops, and required field trips that involve minimal cost to students.

CMS.100- Intro to Comparative Media Studies. Offers an overview of the social, cultural, political, and economic impact of mediated communication on modern culture. Combines critical discussions with experiments working with different media. Media covered include radio, television, film, the printed word, and digital technologies. Topics include the nature and function of media, core media institutions, and media in transition.

21L.011- The Film Experience. An introduction to narrative film, emphasizing the unique properties of the movie house and the motion picture camera, the historical evolution of the film medium, and the intrinsic artistic qualities of individual films. Syllabus changes from term to term, but usually includes such directors as Griffith, Chaplin, Renoir, Ford, Hitchcock, De Sica, and Fellini.

21W.785- Communicating with Web-Based Media. Analysis, design, implementation, and testing of various forms of digital communication through group collaboration. Students are encouraged to think about the Web and other new digital interactive media not just in terms of technology but also broader issues such as language (verbal and visual), design, information architecture, communication and community. Students work in small groups on a term-long project of their choice. Various written and oral presentations document project development.

Next up on the MitBlog: Candy circuits, notes from my kitchen experimentation lab book, plus a certifiable tonnage of bacon.