Next up: a Nostalgic entry about my frosh year. After Finals. Maybe.

In psets, in physics
In midnights, in cans of Red Bull.
In tooling, in frats, in lectures, in hacks.
In ten thousand thirty-two hundred eighty semi-hours
How do you measure, measure frosh year?

It’s time now, to sing out
Though the spamming never ends
Let’s celebrate
Remember a year in chain email spam

Yesterday was the grand opening of the biggest Apple store in the US, and, although I’m not *technically* an Apple fan (I love my Macbook Pro, but I refuse to buy an iPhone – I didn’t even own an iPod until just a year ago), I felt like I should go and partake in the festivities.

So I got to Boylston on foot (my bike was stolen – thanks a lot, whoever stole my bike a week ago – congratulations though, since one of the brakes on that bike is completely snapped off) at 5:30, and there was already a line forming for like 3 blocks down a side street. At 6:45, after much scuffling, I was greeted by a column of enthusiastic Apple employees while getting a free T-shirt shoved into my arms.

I felt like Napoleon, doing his Triumphal Entry. It was great.

To be honest, although there’s so much hype about this store, I can’t see anything that’s really different from a regular Apple store (remember the spiral staircase in NYC’s Fifth Ave Apple Store? We’ve got one of those). There were a TON of enthusiastic employees though (I surmise some were recruited from other stores just for this event), and I managed to glimpse MIT upperclassmen working as employees – hmmm, potential discounts? =D

Yeah – aside from the great smell of new paint in the store and the dozens of iMacs and Macbook Airs they have lined up in the store – I felt like T-shirt I got should have said, “I lined up for two hours and all I got was this freakin’ T-Shirt”! Haha – but in all honesty, the store isn’t bad – and yay for getting another free shirt. :) 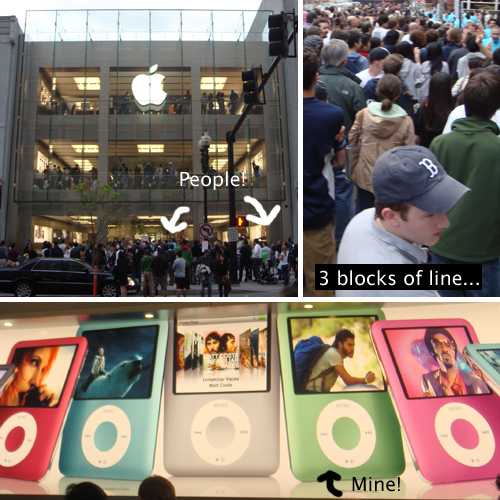 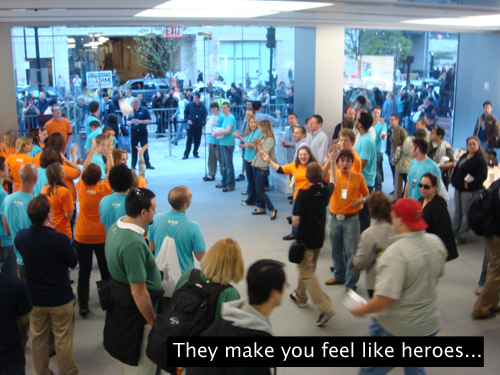 15 responses to “Seasons of Spam”