You know you’re hosed when it takes you a week after classes start to write about your classes. Seriously, look at this mess. 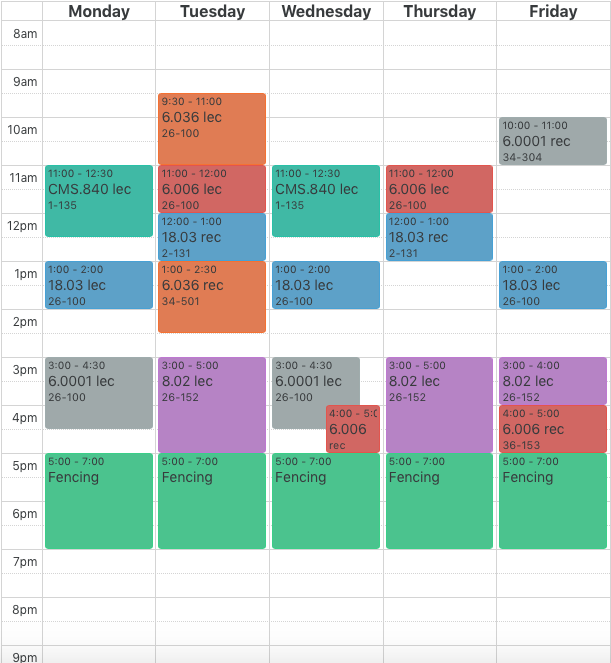 (Realistically, it looks more like this because who even goes to all of their classes? Definitely not me – I decided to write this post right after I decided I wasn’t going to attend any of my Monday classes) 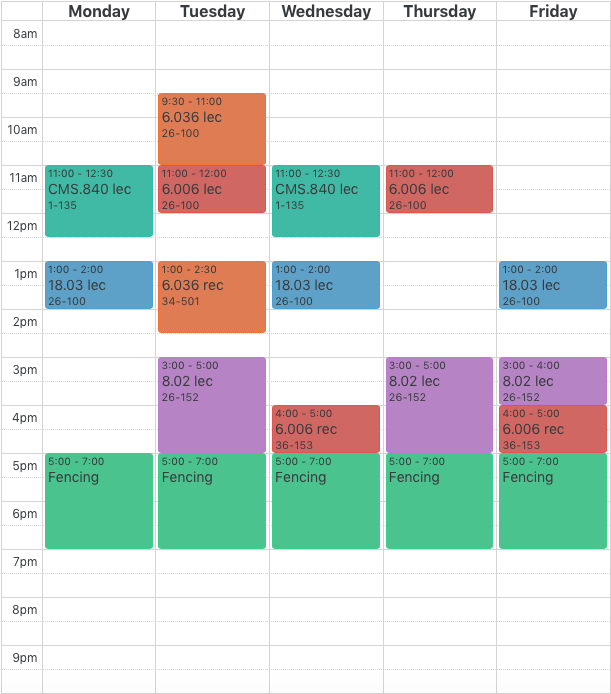 If you’re scratching your head and wondering how exactly MIT is allowing me to take this many classes, it’s because I accepted early sophomore standing, which gets rid of the 57 unit credit limit that second semester freshmen normally have. Basically, to get sophomore standing, you have to have 96 units of credit by the end of first semester, have completed 25% of your GIRs, and have taken one CI-H/HW class. Somewhere between 25-30% of freshmen are offered sophomore standing, but I’d estimate that the percentage that actually accept is probably closer to 10-15%. There are a lot of reasons to accept/not accept sophomore standing (this Tech article goes over them in more detail than I will if you’re interested in learning more), but I personally accepted it because I want to get 18.03 (Differential Equations) out of the way before sophomore year. I’m still on the fence on whether I want to double major in math or be a 6-2 instead of a 6-3, and 18.03 happens to be a requirement for both of those options, so hopefully it’ll help me figure out what I want to do with my life. If I get through the semester without dropping the class, that is…

6.036 – Intro to Machine Learning: I’m pretty excited for this class, both for the material and because I have a lot of friends taking it with me. I also really like the way the class is structured – essentially, I go to lecture Tuesday morning and learn the material for the week, then go to lab hours in the afternoon and work through a sizeable chunk of the pset. In other words, I don’t have to spend that much time outside of class on homework, which is everything I could ask for from a class this semester.

6.006 – Intro to Algorithms: I’m taking this class on Sophomore Exploratory (one of the benefits of getting sophomore standing is that you can get this status early), which basically means that if I do bad in the class, it won’t appear on my transcript. 6.006 is notorious for having time consuming psets that involve a lot of algorithm analysis and proof writing, but it’s also a required class for my major, so I’m going to do my best and hope for the best.

8.02 – Physics II (Electricity and Magnetism): Every time I attend this class, I’m reminded of just how much E&M I’ve forgotten since I took it in high school. I’m terrible at understanding concepts in this class (you can see a ball rolling down a ramp in mechanics, but you can’t see an electron whizzing around in space in E&M), but it’s been pretty easy so far, so I’m going to keep my fingers crossed.

18.03 – Differential Equations: For whatever reason, MIT smiled upon 18.03 students this semester and assigned Bjorn Poonen (this guy) as our lecturer. 18.03 is one of those huge classes where you need to work up a lot of motivation to go to lecture, and having a good lecturer is basically what makes or breaks the class. I’ve enjoyed all the lectures I’ve attended so far, and I think that’s going to make the class a lot easier for me.

6.0001 – Intro to CS Programming in Python: I’m awful at programming under a time limit, so I unfortunately failed the ASE for this class at the beginning of the year. 6.0001 is technically a prerequisite for all Course 6 classes (even though most of Course 6 doesn’t *really* care about prerequisites – shh, you didn’t hear that from me), so I sadly have to get it out of the way. But since I don’t attend lecture or recitation, the class is basically just a mild annoyance to me at this point.

CMS.840 – Literature and Film: I didn’t get into the CMS class I wanted for this semester (a lot of them are lottery only, so the best thing to do is to preregister for a bunch of them and hope you get into one), so I wound up in this class instead. I’m definitely not complaining, though – literature analysis is the only thing I actually claim I’m good at, and reading books is a good break from the endless numbers and equations that my technical classes so kindly provide me with. I’m also currently unsure if I’m enrolled for the graduate version of this class or not…I should probably figure that out :P

I don’t know if I’ve ever talked about fencing in depth on the blogs before (something to do with NCAA rules and regulations), but since Taylor has blogged about basketball, I figured it’s probably okay. The cool thing is that I had never fenced a day in my life before getting to MIT – I actually got recruited from the saber fencing PE class here. I’m still not what anybody would consider good, but I’ve definitely improved a considerable amount since the beginning of the year. I also enjoy it a lot, even though it’s 10 hours of practice a week – for those of you who are familiar with how saber fencing works, it’s very fast and action packed and strangely well-suited to a small, angry person like me. 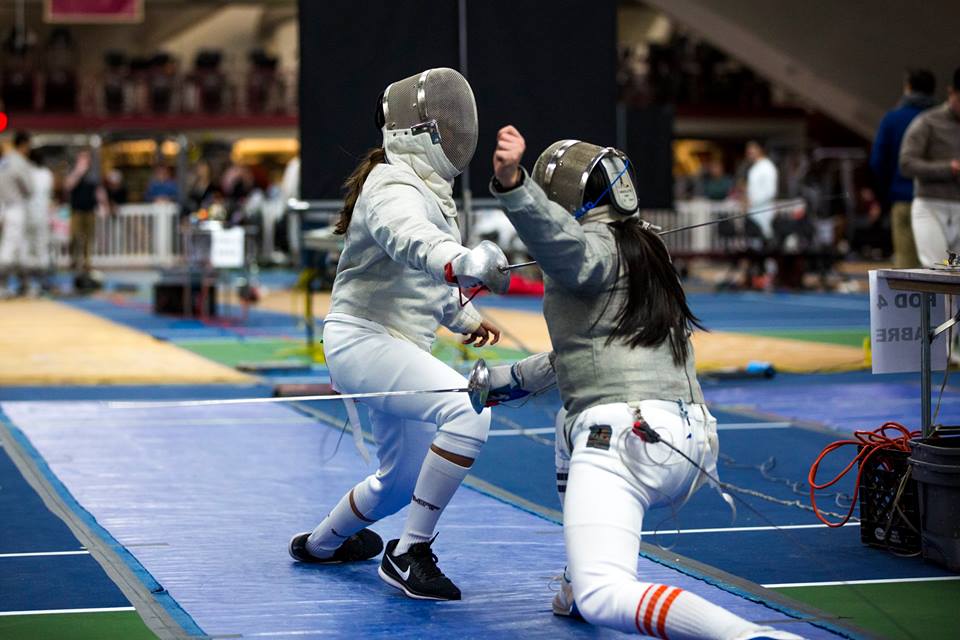 Me scoring a touch! Yayay 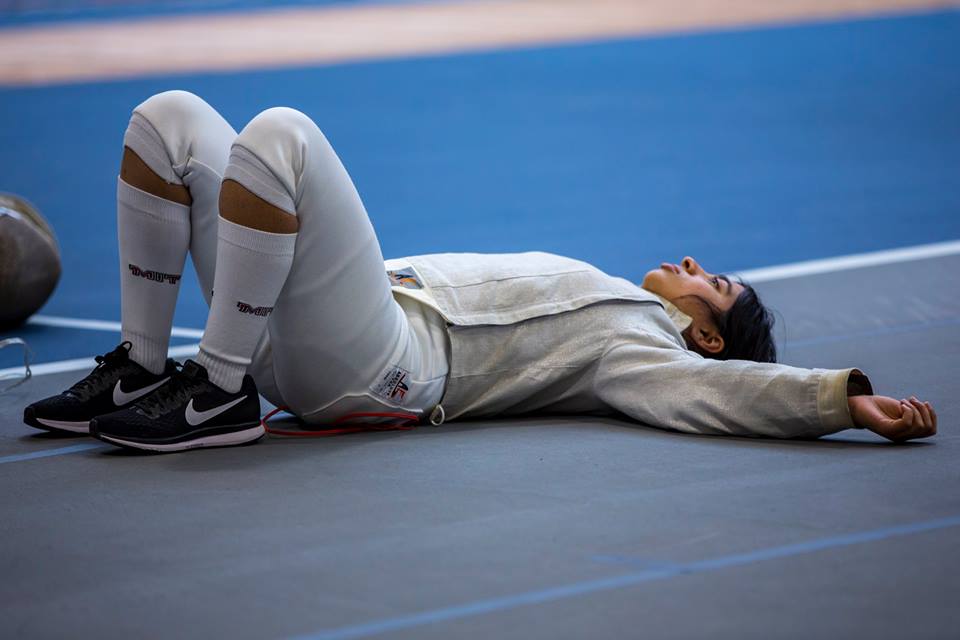 Petey commented on this “me, lying on the floor, existentially exhausted after dealing with all of your content”, which is pretty accurate

The fencing season is coming to an end, so IAP was pretty packed with practices in preparation for all of the meets crammed into January and February. This definitely sounds like a lot, and it is a lot, but I’m a bit sad that the season is ending. Fencing gives a lot of structure to my day, and once I lose that, I will most likely revert to an unnatural sleep schedule and a very screwed up meal schedule. I’m going to try to keep some sort of exercise routine going after the season ends, but like most things that I plan for, this may not actually end up happening.
A Cappella

I finally did the thing and joined an a cappella group over IAP! I’ve always really liked to sing, but I never had time for it in high school, so I’m glad that I finally worked up the courage to audition in college. Singing is the best form of stress release for me, and that’s something I’m really going to need this semester. 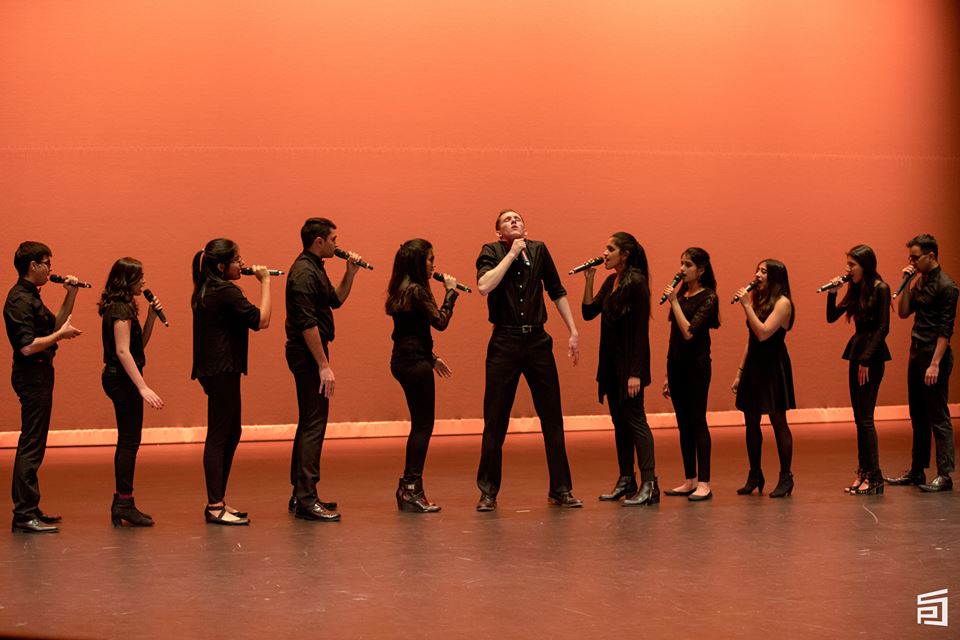 The MIT Ohms! That’s me third from the right :)

I’m currently on break from a cappella until the fencing season ends, but I’m excited to get back together with my friends and sing at the top of my lungs.
UROP

I have a really cool UROP at the Scalable Cooperation group at the Media Lab this semester – after a semester of fangirling over the Media Lab, I finally made it in :,) My work involves a lot of the stuff I learned in 6.008 (Intro to Inference) last semester, and even though I wasn’t a fan of the class, it’s cool to apply the material I learned outside the classroom.
Miscellaneous

Life is short/long, and either way, you’re best off spending your time doing things that you care strongly about. Over the past few months, one of the things I’ve realized that I care about is my dorm, East Campus. I’ve said this on the blogs many times and I’ll keep saying it, but East Campus is by far the best part of my MIT experience, and I’m always going to be grateful that I found such an amazing group of people to live with.

So over the past few weeks, I’ve been learning about “joining the swamp” (running for dorm government positions) and have attended a couple of dormwide meetings. Governing is hard, and governing a dorm like East Campus is even harder, but I’ve realized that if I’m going to put my energy and frustration into being involved in anything, I’d want it to be East Campus.
I may not reemerge on the blogs again for a while this semester, so until then, wish me luck.