And other minor horrors of leaving MIT for the first time in a year.

Yesterday morning, I woke up half-dreaming of the scriptural nuisances of airport security, circa Holiday Season, post-2001 A.D. At 7 AM after a night of post-finals merrymaking (i.e, a plate of brussels sprouts roasted with splurges of oil, salt and pepper; bad movies; walk-up-the-stairs-without-knee-bending contests; watching math majors play Guitar Hero while I pretended to be Guitar Sidekick), you feel the slow, grinding rotation of the earth tugging at sunrise, the groggy skyline gulping down cold milky skies frothed with espresso clouds. Did you know that some people got into MIT recently? Interestingly*, I haven’t gotten out of MIT recently. (In nearly one year, to be astrophysically precise.)

*In fact, this fact is not factually interesting at all, except that it starts with a strategic and misleading adverb. One of my firmest personal beliefs is that one should never waste the grammatical potency of “interestingly” on sentences that are actually interesting, like this one, which began with “One.” One could say that “one” is one of the worst one-word sentence hooks ever. See?

Apparently, I forgot how to communicate ideas other than “you can integrate a stress tensor over a surface without actually integrating it” and “I like Feynman” after one year cloistered at MIT with contact into the outside world that was tenuous at best and Facebook at worst. Soon after departing into the Christmas jingle-suffused bowels of Logan Int’l Airport, I encountered Level 10 communication barriers, on a scale where Level 1 includes talking to Intro to Linguistics teaching assistants. (In case you had an exceptionally well-englished TA, you can consider the scale to be logarithmic.) The first sign of impending bafflement appeared as I handed my boarding pass and state-issued photo ID to the boarding-pass-and-federal-or-state-issued-photo-ID-checker*.

*Do they have actual job titles? Can I abbreviate this to “BPAFOSIPIDC” without offending anyone? I’m writing this on the Internet, so the answer is either obvious or I should ignore it.

Quoth the BPAFOSIPIDC, peering at my (unabashedly expired) Missouri Driver’s Permit, “Did you get an extension on this?”

Me: Nope! Too hosed.

BPAFOSIPIDC (frowning): I’m afraid I have to ask if you have any other identification.

Me: Nope! Should I go back to school now and spend Winter Break watching other people play Guitar Hero? I guess that’s okay.

BPAFOSIPIDC: No, your ID is fine, but you should renew your driver’s permit.

I walked away from the conversation shoeless and uncertain of my understanding of rudimentary human communication. As my shoes drifted down the conveyor belt and into a sophisticated machine designed to verify that they weren’t size five-and-a-half grenades, I puzzled over the indubitably intricate logic of the BPAFOSIPIDC: did he think I should become a licensed driver in Boston, a city where thousands of intelligent college students learn how to not operate a motor vehicle until they’re over 25 and in California? Or does he simply have an unnatural aversion to expired identification? I suppose that’s understandable. I have an aversion to expired dairy. In fact, I’d even venture to guess that I’m expired-lactose intolerant.

Security surmounted, I slid into a decidedly-solid piece of generic aiport furniture and, hazed by a callous carousel of Logan-traipsing on four hours of sleep, flipped to the preface of David J. Griffith’s Introduction to Quantum Mechanics and internalized the most weepingly beautiful prose ever to flower from the turgid, algebra-swollen loam of a QM textbook: “ . . . quantum theory was not created- or even definitively packaged- by one individual, and it retains to this day some of the scars of its exhilarating but traumatic youth.” Never has my heart flowed with such insuppressible pathos for the metaphoric childhood of a scientific field. Yet, as soon as I belted myself into my airplane-seat-that-doubles-as-a-floatation-device-in-case-of-emergency, the intrinsic challenges of Sitting Next to Another Person became crumblingly manifest:

Me (in a mild state of panic, since by now I’m convinced that this guy is working for Delta Airlines and will blackmail me out of my SkyMiles if I don’t get a cookie and enjoy it with televised gusto): Boy howdy, graham crackers are awesome! I have six boxes in my room!*

*This is actually true because of miscalculations in preparing for this.

Guy in Seat 17A: What are you snacking on?

Me (eating pita chips out of a ziplock bag): Pita chips, but they taste like graham crackers, which I presume taste like that delicious, complimentary cookie provided courtesy of Delta Airlines. Yum.

Guy in Seat 17A (unwrapping a cookie with an enormous Delta logo chiseled into the front): Mmm, this tastes like a thick gingersnap cookie, but even better. I love to eat them in the morning*. Hey Stewardess, can I have another cookie?

*This was a dead giveaway. Either this man likes to have a nice airplane flight with his morning breakfast or Delta is paying him for company advertisement in thick, gingersnappy cookies.

(I didn’t actually say this, because I suspected that Delta was filming my conversation with this guy for a commercial on public television.)

Half an hour removed from Cambridge, my regret for leaving MIT had already been amply nourished by the discovery that normal people have apparently sold their right of free speech to airline companies. I’d go back in a femtoheartbeat* if I didn’t have to fly Delta.

Good thing I took pictures of my bed before I left. Now if you’ll excuse me, I need to print these and pin them to my pillow. Else the misery of separation would be unbearable. 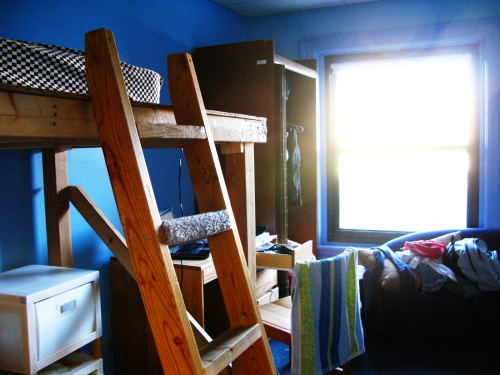 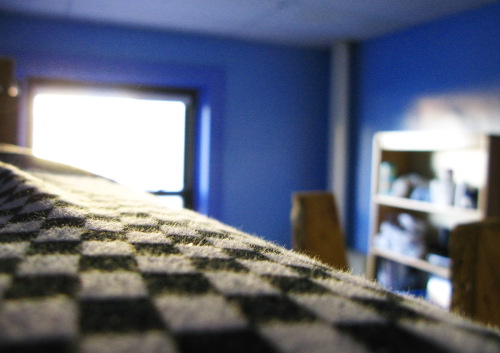 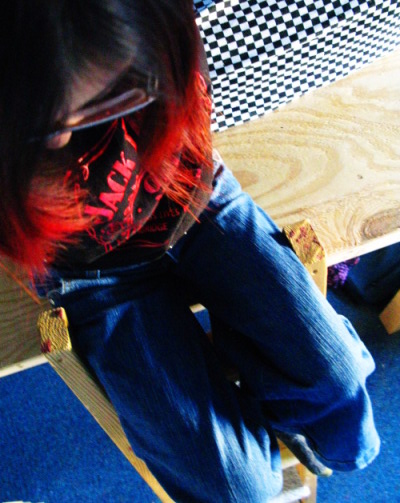 (The ladder isn’t attached to the loft, not even gravitationally and definitely not Coulombically. I took it out of my room and tried to pole vault with it once.)

47 responses to “Snacks on a Plane”