2.671 is an AMAZING class (that many people dislike, for reasons that are totally beyond me) and I’ve been having a great time in it. I’ve been writing lab reports, doing labs, learning, measuring, and pretty much just going nuts.

For our final (9th) lab of the semester, we were assigned a lab station with a particular setup. One station had an anechoic chamber with some microphones and a tweeter with some tanks of various gases, another station had some DC motors with a force gauge and a prony brake setup, another has a beam that is wired up to record its response to an impulse with various levels of damping, etc. The lab setup my partner Pall and I were assigned? Force Gauge. Excellent.

The lab that most people do with the force gauge involves measuring the strength of your bicep and correlating it with EKG and all sorts of other stuff. For lab 9, each team of two people was given a setup and allowed to come up with their own experiment. Pall and I are convinced we had the best setup for this. We decided to measure the impulse of a head when it was snapped up from a sleeping position (not much unlike lecture). We grabbed a strap from the collapsible litter group in 2.009 (that didn’t make any sense to you, that’s ok) and rigged it up to the force sensor. Then, it was time to do science.

In the end, these were the results: 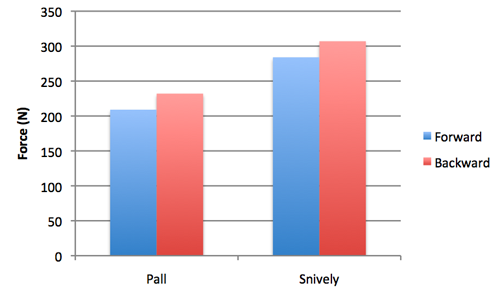 Come to MIT, you get to do this.