What's in your stereo?

What all started as a blatant rip-off of Kris’s post on summer reading led to this: 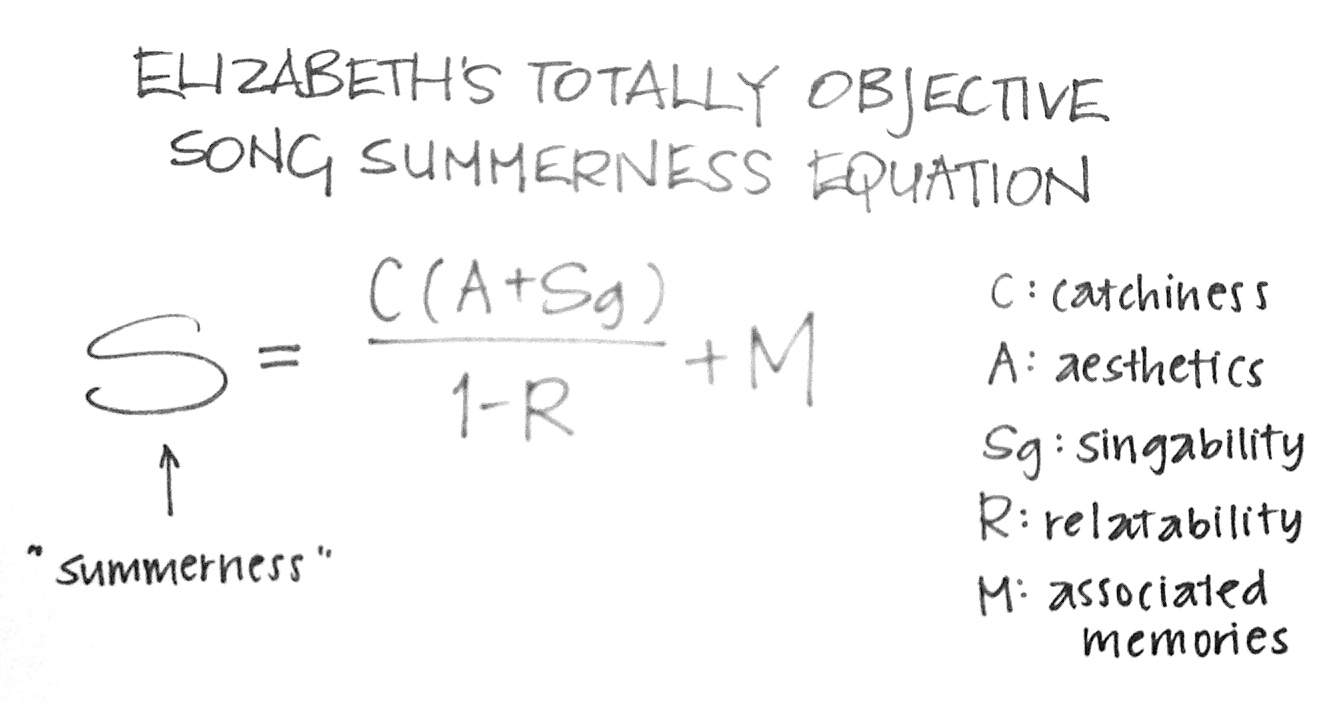 (I call this one Shoot Buttons, I Knew I Should Have Taken a Math Class at MIT)

See, I wanted to write a post on stuff I’ve been listening to this summer, but I quickly realized (as the list started exploding into a bunch of craziness and hoohah) that I had no governing factors to guide my list-making besides “I’m just going to list a bunch of music that I’ve been listening to this summer.” Thus, I had to come up with my Elizabeth’s Totally Objective Song Summerness Equation, which determines a song’s relative “summerness” based on qualities of catchiness, aesthetics, singability, relatability and associated memories. It’s all totally not subjective at all – I mean, I spent a whole two excruciating minutes coming up with this equation. It also explains why, despite the fact that I do listen to a lot of jazz, classical and instrumental bluegrass, those songs are no where to be found on this list (though you should listen to jazz, classical and instrumental bluegrass because they are good for you).

Also, before I get to the list, a disclaimer: R should not be confused with Rs (can’t do subscripts, sorry), which refers to seeming-relatability. Songs with a high Rs value address topics that people would think that other ordinary people would deal with on a regular basis (but which never actually happens in reality). Top 40s producers seem to think that a Rs value correlates to commercial success. And judging from the radio play of “The Lazy Song,” “Last Friday Night” and every single Taylor Swift song ever produced (SERIOUSLY. No one lives in a Taylor Swift song world.), the country’s music consumers are proving them right and making me real sad. But I digress. The list!

2. “Say Shh” by Atmosphere: A relatability value approaching 1, meaning an overall S value approaching infinity? Also, I love Atmosphere. Like I said, totally objective.
3. “Next To The Trash” by Punch Brothers: A really high M value for this one. Punch Brothers are my favorite band of all time (during my freshman year, I saw them perform live three times in three different cities in the span of six months). Radiohead, Spoon and Fleetwood Mac all tie for second, but their songs aren’t summery enough to make the list. When PB’s latest album, Antifogmatic, came out last year, my little brother and I listened to it on the way to his day camp every morning. His favorite off the album is “Rye Whiskey.” There is literally nothing like hearing a 8-year-old boy singing along to a song called “Rye Whiskey.” Also, Punch Brothers could kick the colossal crap out of Mumford and Sons, don’t even get me started.
4. “Nothing” by The Script: My little brother and I (aside from the whole Punch Brothers thing) have completely different music tastes. He LOVES Top 40 stuff – B.o.B., Hot Chelle Rae, OneRepublic, Jason DeRulo, etc. Drives me nuts. However, I have nothing against some well-crafted and clearly-polished pop songs, as evidenced by my shameless, shameless love of The Script. What? I should feel embarrassed? Sorry, I’m too busy being captivated by Danny O’Donoghue’s crooning voice and Irish good looks (seriously, the only man I have seen being able to pull off a scarf like that). I was also an absolute sucker for the Rs factor here (har har, you got me, Sony Music).
5. “Compared To What” by John Legend and The Roots: Despite having some really slimey songs, I love JL. And then JL AND The Roots? Together? Poi-fect summer groove. This one’s from one of my favorite albums of 2010:
6. “Meet Me Here At Dawn” covered by Andrew Bird feat. Priscilla Ahn: This is from The Voice Project, which has produced some really, really great videos for a neat-o cause. Not every summer day is sunny and jivin’. Here’s one for you, sad hipster kid:
7. “Tighten Up” by The Black Keys: Really, any Black Keys song from any of their albums could have taken this slot. The only reason why I picked this one over so many of their other great tracks was because it has such a hilarious music video:
(“But he smells like ranch dressing!”)
8. “Lights” by Ellie Goulding: Is anyone else bummed by the lack of female representation on this list? For some reason, I haven’t been as drawn to women artists this summer. Bummer. Anyway, Robyn (yes, the one that sang this song in the 90’s) was going to take this spot because she actually is everything that Lady Gaga is trying to be (but is failing at being), but Ellie’s songs have such high C and A values.
9. “Semi-Charmed Life” by Third Eye Blind: Quintessential summer music, to me at least, has to include some bratty, poppy, punk or alt rock. A lot of strong contenders could have filled this spot. In fact, I spent a good 20 minutes listening to some super-embarrassing tracks that my middle-school self loved (I’m talking Anberlin, Armor For Sleep, Senses Fail, Underoath, and Green Day stuff from the era when Billie Joe had blonde hair… yeah, it was that bad). And then I ended up picking something from the least brattiest band in the world. I settled on this one because, well, what twentysomething cannot sing along to this song? Very high values for all variables. Slight anthemic quality (“All The Small Things” was a contender, mostly because we played it during the toga party at the camp I worked at and no one knew what it was except for the counselors and it was the first time in my life that I felt old). Plus, it was cleaner and happier than everything else. Also, the first 20 seconds of this fan video CRACK. ME. UP.
10. “Come On Feel The Noise” by Quiet Riot: At the camp I worked at this summer (and attended for four years), it was always tradition to play this song. Luckily, I don’t think any of us were really thinking about the lyrics (or the original spelling of the title) too much when we were kids thrashing along to the song. Probably has the highest M value of the 10 songs here, and ridiculous C and Sg values. I dare you to not sing along.
Like I said, because of the way my equation worked out, I ended up leaving out a lot of stuff that I do listen to during the summer and stuff that reminds me of summer (maybe that explains why I listen to so much Coleman Hawkins and Miles Davis during the winter…). Sorry to all you classical and jazz-loving friends out there, and apologies for not including the trifecta of Joni Mitchell, Fiona Apple and Tracy Chapman. Alison Krauss gets honorable mention.
So, what have you all been listening to lately?