Tasty water, the Charles River, and other things that are not synonymous by Yan Z. '12

It’s a little-known fact that McCormick Hall is home to not only hundreds of wonderful and intelligent female students but also the best-tasting water on campus. Last Sunday, I filled up two entire bottles of sweet, filtered deliciousness from a burbling water fountain while the attentions of the actual residents were occupied by festivities of a barbecueous nature. I stashed the water in my assigned kitchen cabinet back at Random Hall, which is a double-stack of donuts that houses two bloggers plus some other people, whoever they might be.

I mention this only because it is probably the least fascinating thing I have done at MIT.

I’ve gone sailing, suffered two blows to the head from a wayward mast, pretended to have selective amnesia (or maybe I actually did have it. Either way, I can’t remember.), lost a pirate battle, had my lower left quadrant soaked in whatever toxic substance fills the Charles River, smashed a soccer robot into other soccer robots with reckless abandon (all the product of a week-long Mechanical Engineering pre-orientation program), slept in a 3-foot long storage container at the Boston Museum, watched people wrestle in jello, climbed on a roof at 3 AM, fell asleep on a roof from sheer exhaustion, found out that minesweeper and tetris can be played in real life (albeit at a geological pace), helped build a roller coaster at East Campus, won a game of Scrabble, not done laundry, jumped on a year’s worth of collected bubble wrap for 10 minutes, consumed cinnamon liquid nitrogen ice cream, soldered, saw laser graffiti, met highly intelligent people, gone bowling with highly intelligent people at 2 AM, taken a stack of free bowls, devoured pancakes at 4 AM, walked through a room while a juggling convention was in progress, almost made chain mail, and did I mention that I am still alive and non-carcinogenic and bipedal after coming into contact with the Charles River?

What’s more, all of the above transpired in the span of 72 hours! I’ve been here for roughly 580 hours, suggesting that, at this rate, I should go ask for another blog.

Say I had to limit my inaugural entry to a mere 6 hours of my time on campus. Without a doubt, I would pick my first afternoon because: 1) if you are a potential applicant, you’re probably looking for a taste of life at MIT, and it’s clear that the insanely complex flavors of this institvte managed to soak deeply into my first impressions, 2) I lost my camera on my second day, which means that Days 2.5 to 24 bore no fruitful pixels* and 3) I originally blogged about the day of my arrival on the actual day of my arrival, and through the energy-conserving act of copying-and-pasting, the entropy of the universe will not increase as much as it would had I produced an entirely original blog post. This in turn will slow the pace of glacier melting. Logic is so cool.

(*I got a new camera last week, with promise of megapixels aplenty.)

So, here we go! (Editor’s note: The following was originally published on August 18th, 2008 and received by eager audiences with much critical acclaim).

Circumstances necessitate that I foray into the elusive art of speed blogging. Pardon any overtones of James Joyce.

Fortunately, I have now ended the postmodern phase of my literary career. Just in time to introduce you to Random Hall! 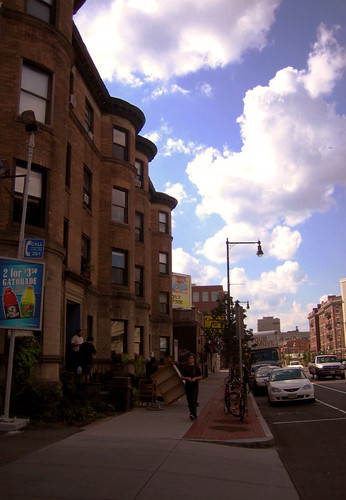 *My driver bore an uncanny resemblance to Rick Astley. I felt as if I were being rickrolled every time he tried to make conversation.

One of the dorm maintenance staff hauled my luggage up three flights of cramped stairs nested with hairpin turns. Ectoplasmically, my roommate appeared behind me, gave a cheery hello, and bounded upward while I followed, groggily pulling carry-on luggage and laptop from the clutches of Newton’s First Law of Motion. The door to room 412 swung open. 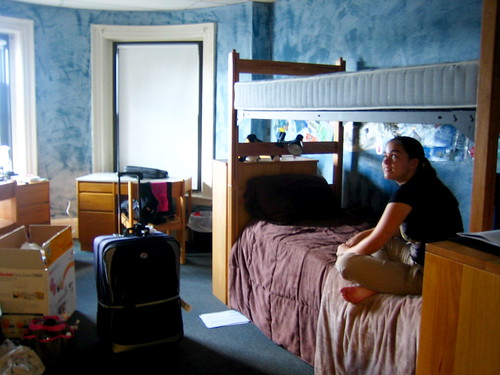 The walls were decorated like a homeless guy’s scrapbook. In addition to the gems below, there were labels from Fanta, Arizona Green Tea, Skittles, Coke, and Poland Springs. It gave the room the perfect touch of dumpster. 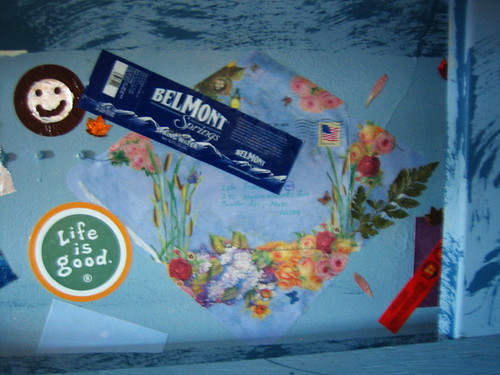 As you can almost tell from the picture below, the seemingly simple task of reaching the top bunk (mine, of course) may or may not have been featured in the previous season of Fear Factor. Every single path to my cold, unspringy mattress involved creaking wood and 45-degree wobbling. I had about 4 near-death experiences while trying to install my fitted sheets (unfortunately patterned with a vertigo-inducing checkerboard design that will haunt my grimmest nightmares). 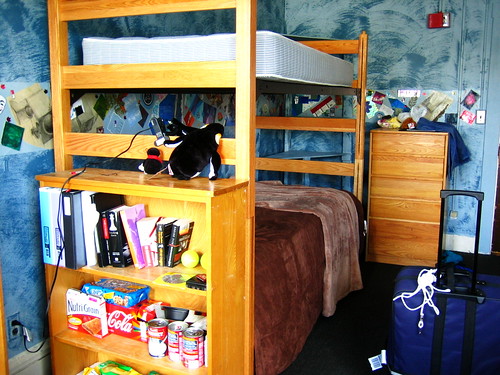 Even the view made your brain cells withdraw in fright. 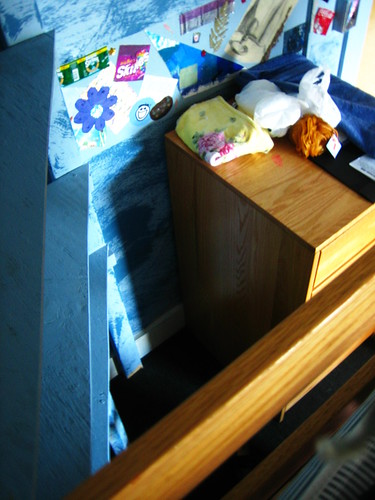 The one from the window was somewhat better, as I’m squarely in the armpit of Cambridge city life. 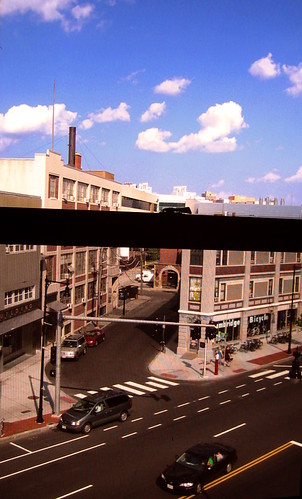 What’s more, the light in the room was absolutely hideous, as you can clearly tell from the picture. Someone more poetic than I would call it a frosting of sun on a creamy blue cappuccino. But, alas, there is nobody more poetic than I. 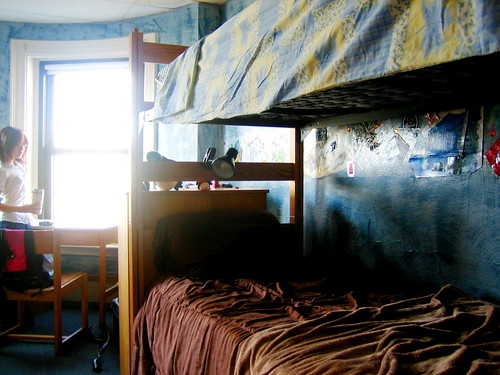 Kitchen? Of course it exists! 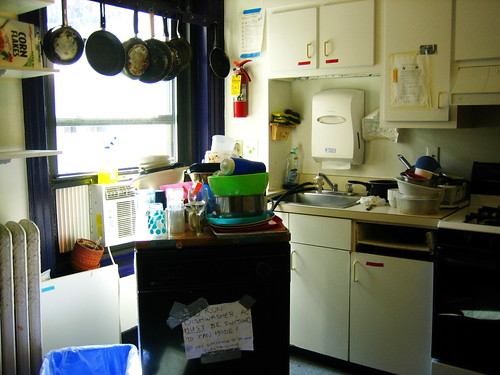 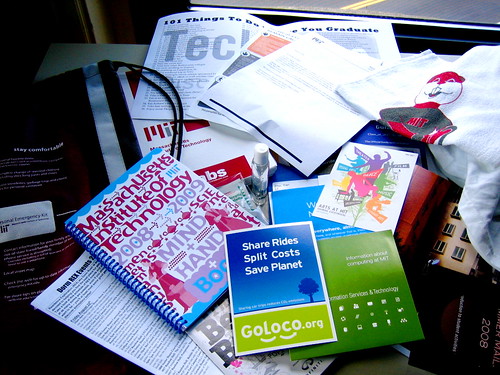 I spent the rest of the afternoon unpacking and finished it off by heading out to a barbecue with my pre-orientation Mechanical Engineering group. Inexplicably, Chinese food was served over conversations about Segways, superheroes, and Survivorman. Dinner segued into a socialization period in which YouTube videos of Rube Goldberg machines were projected onto a screen with much excitement and nail-biting suspense. I dug myself into a couch and remained asleep for the entirety of the movie that followed. Woke up, staggered outside, made it back to the dorm and spiraled around until I met my room. Hi there.

(For more on the unique and mysterious properties of Random Hall, check out Kim’s guest entry on Sam’s blog).

That’s all. I don’t live in this room anymore, but perhaps you will someday. Just don’t look down if you make it to the top bunk.

26 responses to “Tasty water, the Charles River, and other things that are not synonymous”