Telethon Fun…Squared by Paul B. '11

The amount of fun experienced at an event grows exponentially as a function of bloggers present.

Hey all, just another entry about the EA Telethon madness. I ended up helping out from 6:00 to 11:00, with maybe a half-hour break in between to write up a quick blog entry – so it has been quite an exciting time. I’ve called more pre-frosh than I can count, though sadly about half of you were out of your houses (MIT pre-frosh are busy people, apparently). So if I happened to leave a message on your machines or with your parents, feel free to comment below. ;-)

All in all, about 60 students – a record turnout – helped call the Early Action pre-frosh. Yes, all 522 of you! I’m not sure if we were lured by the idea of talking to prospective students or the free food (more on that below), but either way, it was a pretty strong showing of support. Most of the callers were freshmen, like myself, though I saw a sizable sprinkling of upperclassmen as well. Virtually all of the dorms represented, along with a few fraternity brothers and sorority sisters.

Upon arriving, I signed in with my name, living group, and class year. I then received a stack of about ten single-sided sheets, one for each of the students whom I was supposed to call. We used the sheets to keep track of when we called, whether we got in touch with the student or not, and (if necessary) when would be a good time to call back. Most of the pre-frosh I called were from the Midwest, since I asked for people from Indiana – most of the callers wanted to talk to admitted students from their home state. But I also ended up talking to a few people whose names I remembered from Facebook or the blogs – which was amusing, to say the least.

After the first few calls, I had a pretty good spiel developed, which went something like this: “Hi! This is Paul Baranay. I’m currently a freshman at MIT, and I was calling to say congratulations to on being accepted to MIT! *cue awkward laughter and/or shy “thanks” from the pre-frosh on the other end* So I was just wondering if you had any questions about student life, or research, or just MIT in general.” From there, it was pretty much anyone’s guess as to how the conversation would go – some lasted two minutes, some five, some half an hour or more. And that was all fine with me.

If for any reason you didn’t get a call, you really didn’t miss much, especially if you’re already a dedicated reader of these blogs – but it was a lot of fun for everyone involved. If you really do have any burning questions about MIT, you can always leave them in the blog comments; or just drop me (or any of the other bloggers) an email. We’ll be happy to help. Additionally, I do have two important reminders that you should all be aware of:

I personally think the second bullet point is the more important of the two, but I imagine the parents would probably tend to disagree with me on that point. ;-)

And now I’m going to stop writing and let the photos I took do the talking for me. Because no telethon is complete without me taking fun, awkward photos of my friends and other people nice enough to put up with my antics. =) 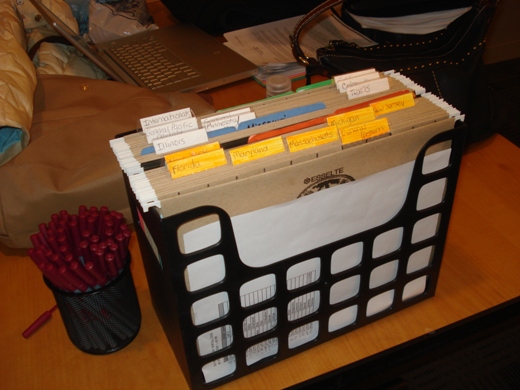 We take admitted students’ papers out of this big file, call them up… 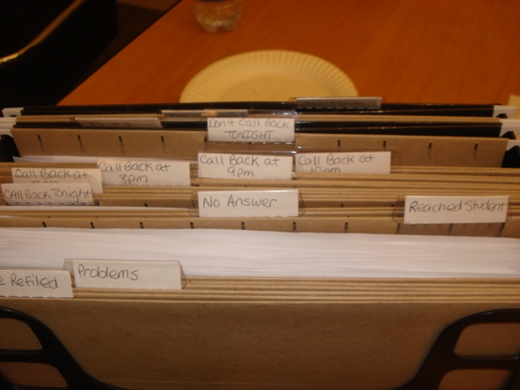 …and put them in the big file of students who have been called. 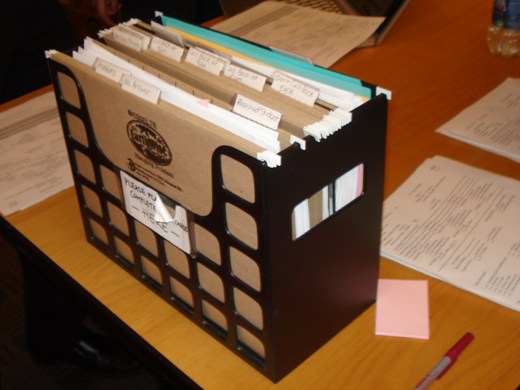 As the night goes on, the “done” file magically gets bigger! 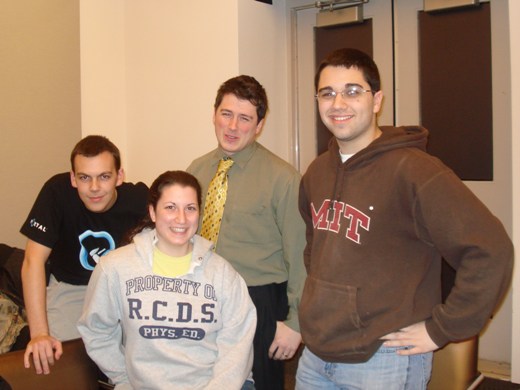 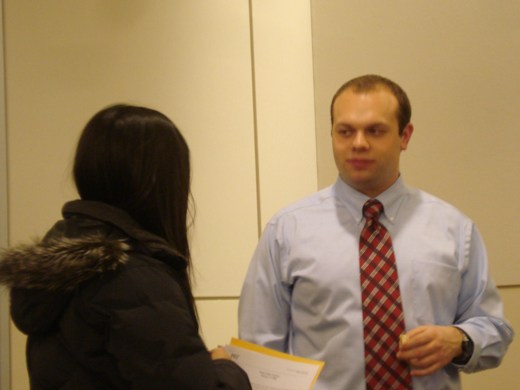 Friendly Admissions Officer Johnathan (whom you may remember from this entry) gives advice.

[THIS SPACE INTENTIONALLY LEFT BLANK]
There should be a picture of Ben Jones visiting the Telethon here, but he came down sick with something today, so he couldn’t come. Alas, but it happens to the best of us. 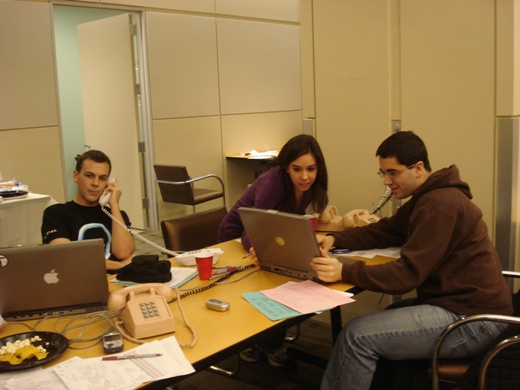 Alina ’11 and Jon work on the computer as Snively conducts a call. 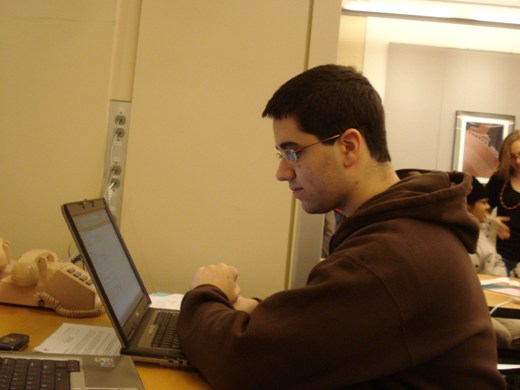 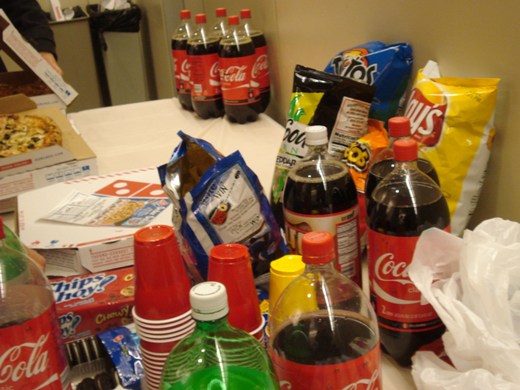 One of the best parts of the Telethon: free food! Actually, you’ll learn this quickly if you decide to come here next year: most of the events at MIT have free food, whether they’re student-run or put on the administration, and it is absolutely wonderful. 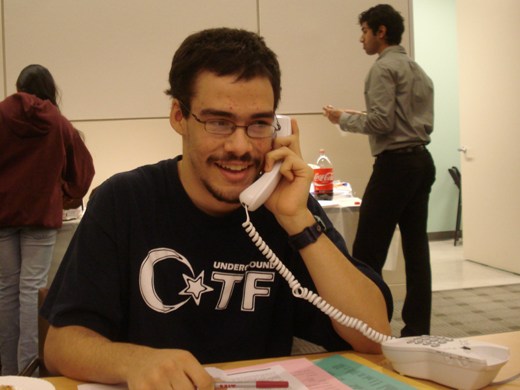 My friend JR ’11 shares a laugh with a pre-frosh. 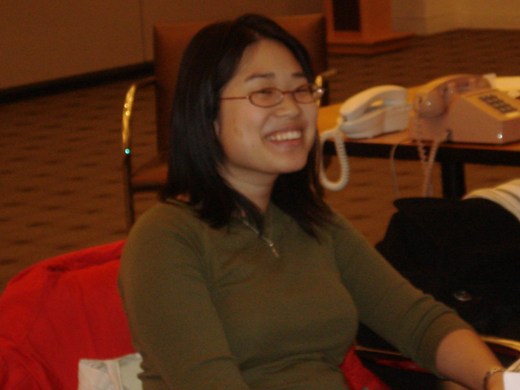 Another friend, Grace ’11, favors me with a smile. 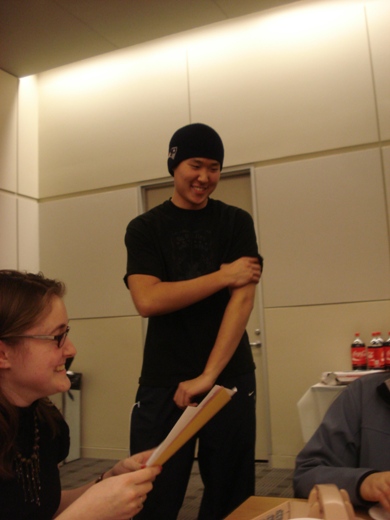 With arms like that, Sun ’11 should have been arrested for illegal weapons. 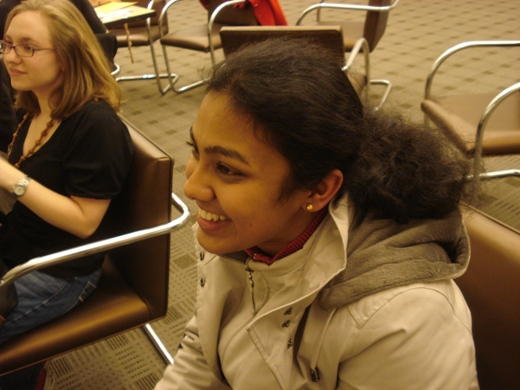 Sivakami ’11 is super excited to have her photo on the (in)famous MIT blogs. 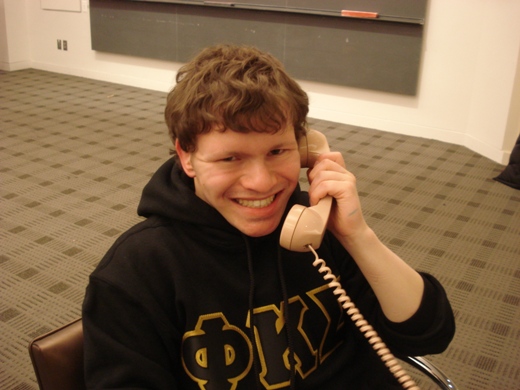 I smile for the camera. So cheesy! 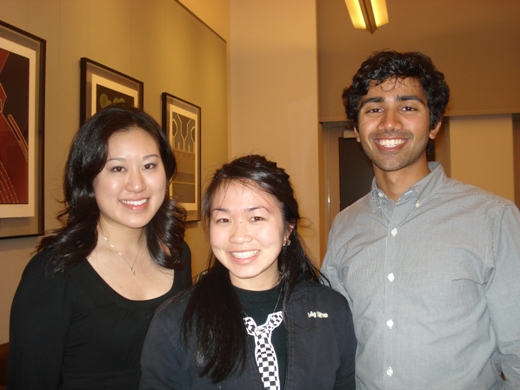 The awesome people who actually organized the telethon: Jennifer ’06, Stephanie ’10, and Dhru ’07. 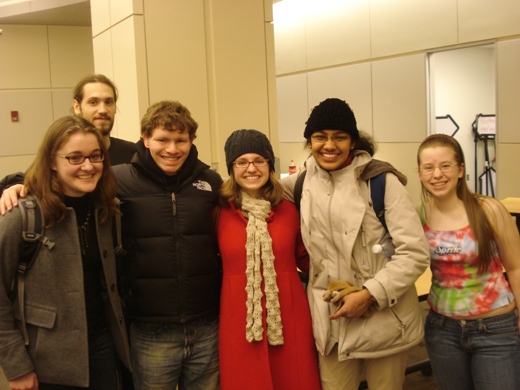 Possibly my favorite picture from the whole night, this shows the last six students to leave the telethon: Colleen ’11, Josh ’08, Me, Stacy ’11, Sivakami ’11, and Kendra ’09.

And that’s it for the EA Telethon! Hope you guys enjoyed it as much as I did!