Where we call you --

7:17 pm
Tonight is the EA admit telethon, wherein we spend all night calling all 522 admitted freshmen and saying things like “HI! OMG OMG OMG YOU’RE A PREFROSH AND WE’RE SUPER EXCITED TO TALK TO YOU AND I WANT TO TELL YOU EVERYTHING ABOUT MIT AND AND AND AND” while you sit there and roll your eyes at us.

In all actuality, I am really excited to call you guys, but the phones are kind of all busy right now so I have to wait a little bit. I’ve decided to do a liveblog and chronicle this experience (waiting and calling). Random pictures may appear and I’ll answer questions online. Stand by the phones guys, we’re callin’ everybody!

8:45 pm
Just got off the phone with Marta from OR (represent!) and had a great conversation with pretty much every aspect of freshman life at MIT. I love this school and all the people that get in!

9:00 pm
Successfully called Marc R. after digging around through bunches of paper. Score one for blog comments being useful!

9:10 pm
So now this is Jon, Snively’s roommate, er… the blanket guy, semi-guest-blogging on his computer because I’m bored and have a relatively long streak of getting automated answers! So the telethon seems to be going well at this point, all of the phones are still filled, and we’re calling people like you, prefrosh! Prefroshes? What’s the plural? Who knows. So anyway, I miss being a prefrosh because CPW was the best thing EVAR. It also reminds me of the first time I actually met Snively, where his first statement to me was “I believe I owe you this” whilst handing me a Bawls soda. Good times. Moral of the story: go to CPW. It’s the best thing since not just sliced bread, but any kind of bread whatsoever. Ok, there’s dessert now. Goodbai whorld! 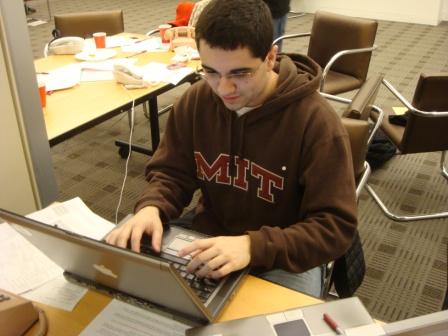 11:14 pm
Alright, I’m back in my dorm and ready to start finishing my physics PSET. Man I’m tired of these! Anywho, here’s a quick wrap-up of the telethon.

@Carmen/Jing Jing
As for who called who, they had all the EA admits sorted by state so we just grabbed whichever state we wanted. Most of us went for our home state first (Oregon, represent!)

@dan p
Goosebumps of joy eh? Hm, I’ve never actually been told that before. I assure you, I’m just a person, and sometimes a pretty boring one at that. I’m flattered though, thanks.

@Sam/Hawkins/Marc R.
After you commented we looked around and found your forms to call again. Hope you all had nice chats.

@MiniPocketsized
I looked really hard for your paper but I couldn’t find it! I hope you got a phone call, I’m assuming that somebody else had your sheet, I tried though!