Thoughts on cooking and gratuitous prefixes

In the past three months, my relationship to cooking has swerved from reticent affection to soul-consuming infatuation. Apologies before I go any further: if you expected me to write about physics, or midterms, or having too much work to do, or hilarious mistakes in my problem sets, or what Noam Chomsky thinks about you, sorry to disappoint. I intend to rhapsodize about a slice of sweet, crunchy red apple dipped in balsamic vinegar and dusted with cayenne pepper. The first time I slivered the crisp pink flesh into a pool of red-freckled $11.99-per-bottle-balsamic, a tableful of faces stared in suspended disbelief, munchlessly unaware of how sleekly each succulent slice melted into pulpy, fibery bliss. The symphonic scherzo of flavors started with a childish grapeyness, seguing slowly into the mature musk of well-aged Costco-quality imported vinegar, followed by the buttery sweetness of ripe apple meat, and finally dissolving into the passive-aggresive heat of cayenne powder. The result was wild and bipolar, or maybe tripolar, yet glamorous in a brutal Russian sort of way. Somewhat reminiscent of Shostakovich’s later symphonies.

I offered a slice to Li Brunetto ’12, who tasted it and replied, very thoughtfully, “This tastes like detergent.”

That’s how I lost my fear of cooking.

Li notwithstanding, I ended up becoming the chef on Saturdays at pika last quarter. A bit of background: pika, a 30-person independent living group snuggled in the backwoods of residential Cambridge, boasts one of the most ferocious kitchens at MIT. Knives galore, a meat locker, several fridges, an industrial-grade sink, pots large enough to double as seafaring (riverfaring?) vessels on the Charles, three bread machines, a Costco membership, and a wok that probably appeared during one of the battle scenes in Lord of the Rings allow pika to run a meal plan 7 days a week, year-round, with over 40 members. Every Saturday, I’d arrive at 4:00 pm, brimming with gastronomical illusions, take one look at the unbeautiful mountain of dishes in the sink, suffer a bout of depression, run the dishwasher several times, run downstairs to the pantry/meat freezer/fridge, and then realize that the bunch of fresh organic radishes whom I’d cast as the lead actress in my production of Citrus and Radish Confit was actually a bunch of beets. I swear, I must have been absent on the day in kindergarten when they taught you how to identify vegetables.

*This phrase is the proud winner of the Understatement of the Month Award. Ding!

Anyway, after figuring out why the giant white tomatoes with the multilayered skins were making my eyes water, I’d chop, broil, bake, fry, boil, season, blend, stir, and sample for two and a half hours until dinner was served for 30+ people. By which I mean that I pretended to be Mark Bittman and penned dining section articles for the New York Times in my head while delegating all the actual work to Ben, my cooking assistant. The results ranged from disastrous (oversalted garlic eggplant) to spectacular (coconut curry chicken), but all that truly matters is that Ben inevitably almost lost a finger due to some unfortunate chopping accident and ended up smelling like garlic every week. Did I say that out loud? I mean, all that matters is that every Saturday, we sat down to a delightful home-cooked meal.

(There was also a second chef who did a large chunk of the cooking and bought the groceries, but I’d prefer to not give him credit. Sorry, Jared. You can start your own blog. Besides, you spent like 3/4ths of the time re-organizing the spices to be in alphabetical order by Latin name or something.)

To celebrate Ben’s continued ownership of all ten digits on his right hand (I’m not saying anything about the left), here’s a list of my favorite recipes so far, each one in ten words or less:

-Apple and sour cream borscht (serve with a loaf of warm, dense pumpernickel freshly kneaded and baked by one of your three bread machines, just like the Russians used to do.)
-Jamaican jerk tofu baked with green apple slices
-Roasted black bean and sweet potato salad
-Savory olive oil, coconut, and pistachio granola (the trick is to use roughly equal parts salt, cardamom, and cinnamon)
-Curried cauliflower flatbread with roasted onions and sprouts
-Korean BBQ ribs (keep it simple)
-Chicken simmered in chocolate almond mole
-Asiago beer bread
-Cumin braised lamb
-Pork chops with apple and red wine reduction
-Coconut curry chicken
-Spicy roasted chickpeas
-Strawberries with balsamic and black pepper (I haven’t served this yet, but it’s among the most dazzling flavor trios ever, rivaled by only Peanut, Butter, and Jelly*.)

(*Not really. Sometimes, you just don’t want that extra comma there.)

Much to my horror, I discovered a few weeks ago that I was slotted to cook for tEpikazoo, an 80-person feast for three of MIT’s hungriest living groups (tEp, pika, and Tetazoo). If Ayn Rand had to be a dinner organized and cooked entirely by college students, she would be tEpikazoo. Specifically, she would be Spang’s Seitan Pot Pie, which not only stimulated the consumers (pie-eaters) to produce value (pie crusts) but also was large enough to feed a small capitalist nation. 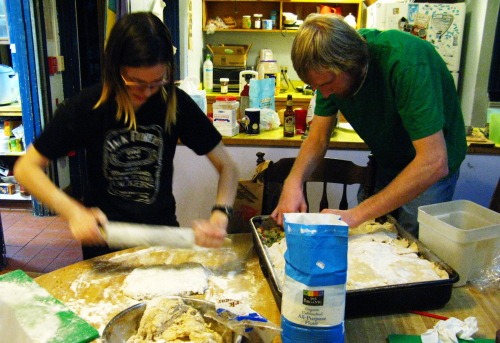 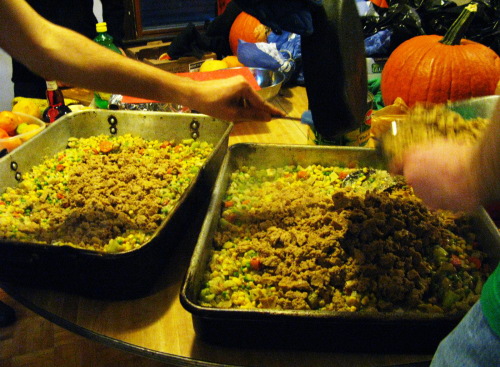 Luckily, tEpikazoo was a tEpikasuccess thanks to the work of head chef Spang ’10 and a miniature army of volunteers from pika, East Campus, tEp, Senior Haus, and Random Hall. As soon as I tEpikazoomed over to pika after my last class on Friday afternoon, I was tEpikastounded by the frantic whirl of carrot-chopping, potato-peeling, pasta-boiling, falafel-rolling, apple-slicing, soupmaking, cheese-grating and just about every other compound gerund that happens to sound delicious. 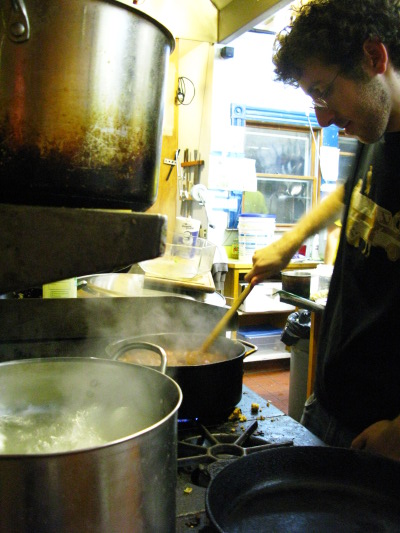 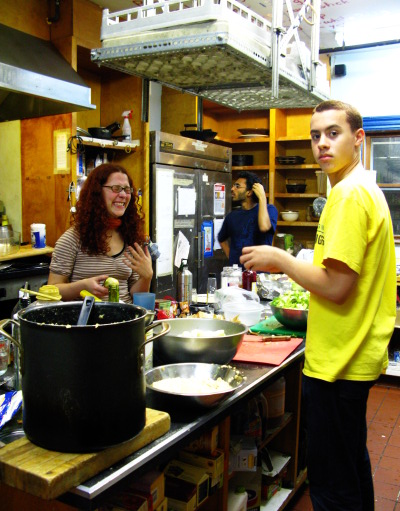 [Editor’s note: I’ve decided that using truncations of “tEpikazoo” as prefixes would not be tEpikacceptable if it weren’t so tEpikaddictive.]

Did I mention the automized apple-slicer? It was hardcore enough to core the hardest apples. Zing! I think I’ve reached my literary device quota for the year. 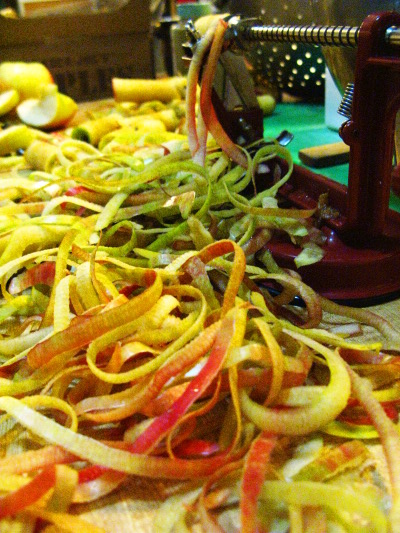 Maita ’10 cooked a trough of wonderful German potato salad. True story: I once failed a calculus quiz in high school because I had no idea what a trough looked like and therefore couldn’t integrate over its volume. I think I just assumed that it looked like a rectangular prism, or maybe an ice cream cone. 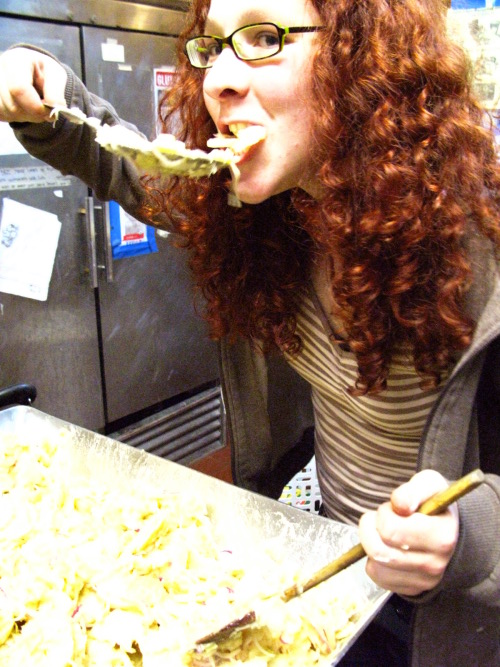 I baked two batches of beer bread, a form of carbohydrate that contains another form of carbohydrate. (The beer actually replaces the yeast in ordinary quick breads.) I am told that the beer was “German” and “stout” by the purchaser. Anyway, the first batch tasted stout but not as German as the potatoes. 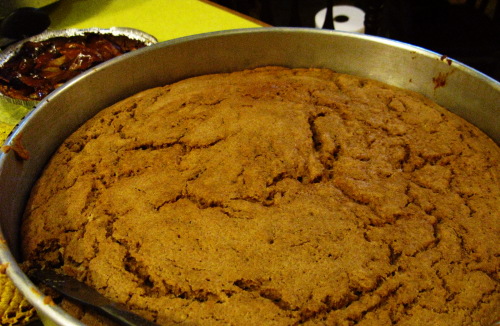 The second was generously smothered in asiago, parmesan, and another cheese from Trader Joe’s whose name made me feel suddenly francophobic. Although the homely German stoutness of the bread was muffled by a strong whiff of asiago, just like the German Empire was historically muffled by the strength of the Italian kingdom in the Austro-Prussian war, the creamy-savory blend of flavors was marvelous. 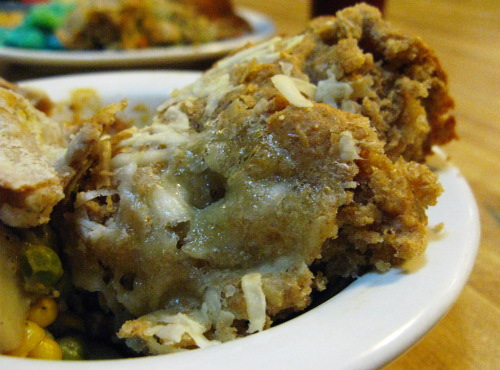 As expected, Spang’s prolific Seitan Pot Pie was stunning, sort of like the 100-page rant at the end of Atlas Shrugged except much more enjoyable and buttery. 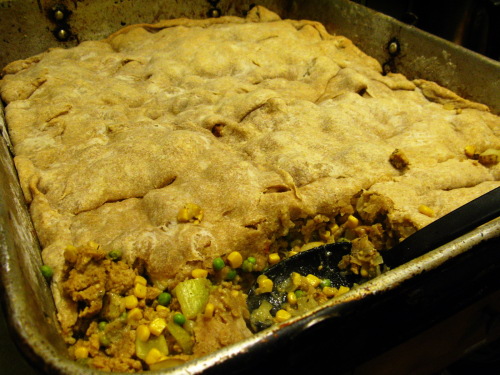 For dessert, I dished out four bacon apple pies, as featured in the New York Times. (The reporter mentioned it for about 1/4th of a sentence, but I like to prolong my fleeting moments of celebrity.) 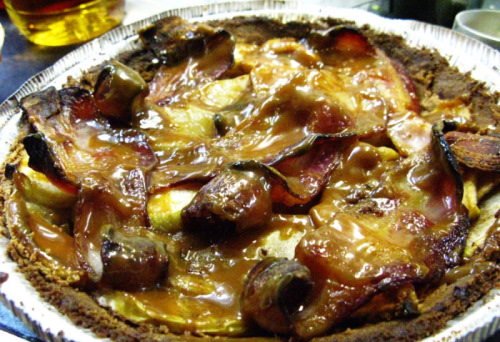 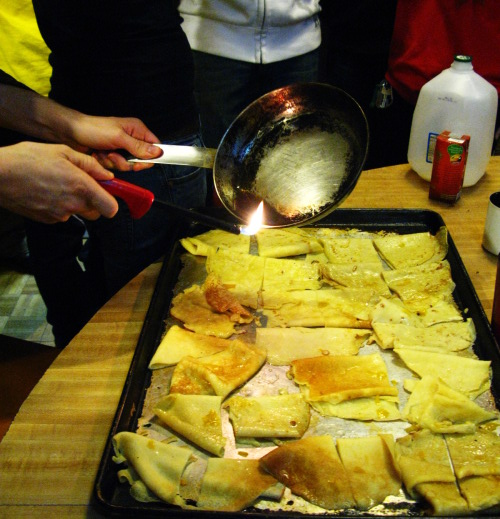 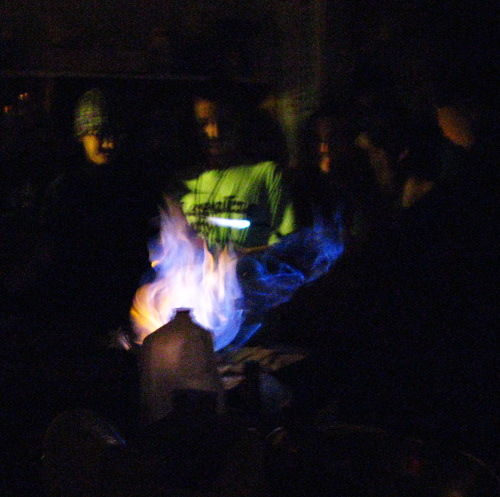 At some point during the night, I announced my long-awaited decision to join pika by scrawling “I PLEDGE!!!” on a roll of paper towels, which I then hurled into a packed dining room. Unfortunately, instead of sailing triumphantly through the cool autumn air, the banner of extra-strength paper towels broke in mid-flight, leaving me with “I PL” and someone on the other side of the room with “EDGE!!!” One quick-witted observer, who no doubt was a Scrabble champion, pieced together my message and yelled it to the room, initiating a rib-cracking round of hugs and congratulations. As with all spontaneous celebrations, this one inspired blurry spur-of-the-moment photos that, upon closer inspection, are actually sort of creepy. 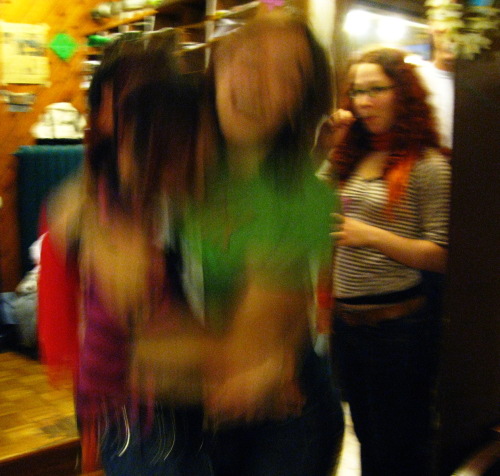 (I’m the headless pink-and-black blur on the left. That’s another sentence I never expected to utter.)

On that note, I’ll leave you with the Unrelated Problem Set Typo of the Week, courtesy of 8.07. [Professor Belcher labels this, “one of the strangest trig identities in equation (7.5.2) of Problem 5 that I have ever seen (it is also totally wrong).”]

Anyway, as the kids these days would say, I ROFL’ed.