"There are bridges you cross / You didn't know you crossed / until you've crossed."

(the tagline is my favorite line from Wicked, hahaha – how “philosophical” it is LOL)

So hello from the other side of a terrible week of midterms! Although I’m technically only taking 4 classes this term, I had midterms in three of them (Spanish 4, Biology Lab, and Organic Chemistry – that’s 21F.704, 7.02, and 5.12 for all ye eager beavers) this week. Although the Spanish and Bio went fine, I’m pretty sure that the Orgo exam was a colossal disaster (despite me only sleeping around 4 hours in the last 40 hours because of studying for the test). Sigh. Any hints on how to do well in Orgo? It’s supposed to be the most basic of all my classes that I’m taking this semester (7.05 – biochemistry – technically requires 5.12 as a prereq but I’m doing them concurrently. Ironically, I’m getting a far better grade in 7.05 than 5.12) – but I’m seriously struggling in orgo. Argh!

(I don’t know if you guys remember when you first learned Calculus. For me, when I first took Calc BC in sophomore year, Calc was just a huge nightmare, since there were so many tricks with integration and differentiation that you had to learn, and there were so many things that didn’t make sense to my young and undisciplined mind. I don’t know if it was the fact that the idea of calculus seemed so novel to me or whether our calc teacher purposely selected the most difficult problems that he could find –

(seriously, he was so mean – through his preparation, I almost did the actual AP test “blindfolded” (ok not literal), finished in half the time allotted, and passed it with flying colors)

– but I remember staring at pages of worked examples but just seeing a huge blob of numbers and variables melting into each other. Larson, Anton, & “1000 Worked Problems in Calculus” quickly became my best friends through long sleepless nights.

Now, it’s funny, because I almost feel the same way with Orgo. Just like Calculus, I feel it’s almost like learning a new language in the sense that you have to really re-examine the way that you “think” about chemistry and no longer depend on the memorization or the erroneous reasoning that may have carried you through in the past. I would spend hours studying McMurry – thinking I’ve understood all the reasoning and the mechanisms – but then turn to a pset or some solved examples and feeling completely lost again. Meh.

In retrospect, I picked up many calc problems that I struggled with in the past when I was sorting my high school papers out last year, and now, they seem like child’s play. Perhaps Larson had done his magic in my head, but I feel like some parts of calculus had ingrained themselves so deeply in my mind that they could never be removed. I can only hope it’s the same for orgo?)

Spring Break is coming up, and tonight I’ll be leaving with five of my peers to The Hague, Netherlands, where we’ll be representing MIT (well, and the nation of Belize) at WorldMUN. Should be quite exciting and a welcome break away from campus (although, on the bright side – Boston is getting a lot warmer recently! hehe).

Well, this post is more of a celebratory note after a week of hideous preparation for exams (after I press the “save” button, I’m going to go snooze until 1 PM =p). So it’s pretty devoid of meaningful content, hahaha. Although I do want to share with you a JDrama that I just finished watching that has connections with MIT!

The drama is called QED, Shoumei Shuuryou in Japanese, and it actually only just finished airing in Japan like 2 weeks ago, so it’s really recent! (actually, it started airing when I was spending IAP in Japan).

Well, you guys know what QED is in English, and Shoumei Shuuryou is basically just the equivalent of that in Japanese.

The drama profiles this prodigy guy (Touma So) who graduated from – you’ve guessed it – MIT when he was only 15. (as the valedictorian of Course 18 to boot – what makes me more curious is that MIT doesn’t append honors to degrees, so can one know that he graduated first? =p). For some reason (to be discussed in the drama), he decided to leave off continuing at MIT for grad school and enroll himself in a regular Japanese high school. At the school, he is befriended by Kana, the energetic and oft-flamboyant female protagonist, whose brash actions lead the duo into one adventure after another.

The drama is laid out like most detective dramas, with one episode consisting of one mystery, and usually Touma solving the crime very suavely 10 minutes before the end. His signature is presenting his argument and analysis of the mystery with the letters Q. E. D. – which contributes to the title of the drama.

So the whole drama has very little to do with MIT as a whole after Touma was introduced as a MIT grad in Episode 1, but I find it kind of amusing how that drama inadvertently also reveals many stereotypes and conceptions towards MIT (or prestigious universities as a whole in the US) in the Japanese society. For example, “MIT” was often uttered with an air of awe in the drama, and we often see Touma writing mathematical proofs on the blackboard with speed and elegance (actually – I feel this math stereotype towards MIT is very emphasized in Asia. my host family in Japan was pretty surprised in the beginning when I told them that I was studying biology at MIT, since they thought that only math, physics, and computer science existed at MIT). I also thought it was pretty interesting how the directors chose MIT (or rather, the original author of the manga, since this drama is adapted from a manga series) to be Touma’s alma mater, when he could have as easily chosen Harvard or Princeton, for example.

This just goes to show that the letters M. I. T. are forever connected with scientific excellence no matter where you are in the world. ;)

Anyways, there’s a few more pics that attest Touma’s suaveness bestowed upon him by MIT.

So these photos are stolen from a MIT grad student’s blog (thanks and sorry for the hotlinkage! =p) and she goes into an admirably deep analysis of the mathematical proof presented in the first episode, should you be interested in pursuing the subject further. =p 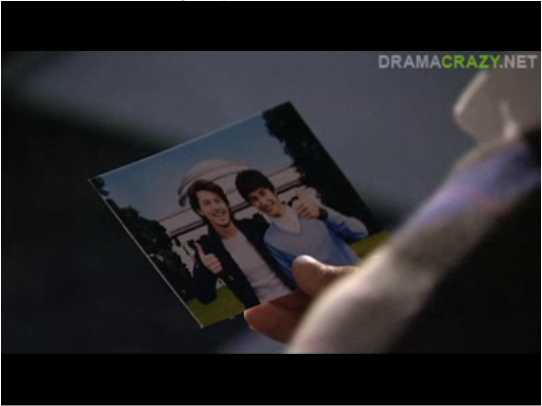 So this is later on in the drama – recognize that building in the background? (and the admittedly poor Photoshop skills? =p)

The drama itself is comprised of ten 45-minute episodes, and is fairly enjoyable throughout (I must warn you, however, that the drama veers into severe fantasy plots towards the end of the series, and that was kind of irritating given the more “scientific” feel of Episodes 1 and 2).

(ps. It’s also kind of interesting after you see how often Touma consumes yakisoba pan in the series. Along with his dramatic Q.E.D flourishes, this is another thing to look for =p.

pps. I also really love yakisoba pan, and that’s why I brought it up, hahaha. Try some if you go to Japan! They’re usually really, really cheap – like around 100 or 200 yen.)