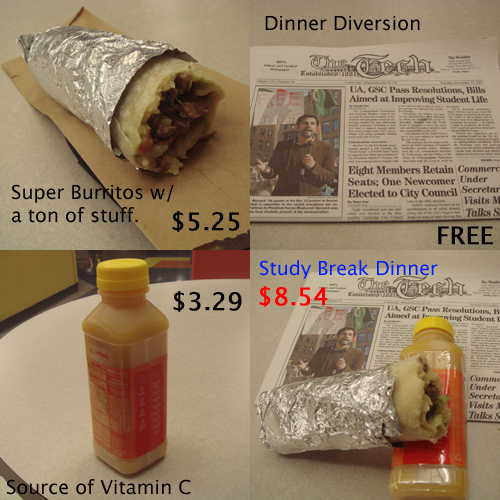 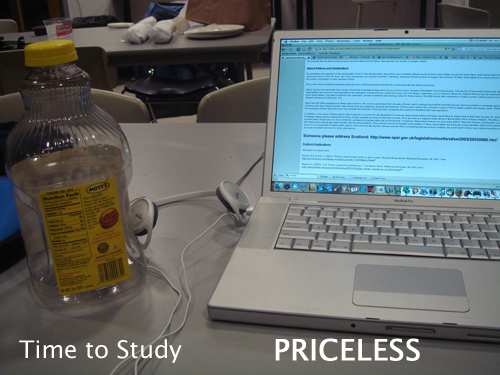 I was looking at the calendar a few days ago and thought to myself, “Wow, I’ve been in America for three months.” To be honest, these three months seemed to pass by in no time at all.

Between studying, traveling, and partying, the months of August, September, October, and now, November, passed in rapid succession.

One of the things that you learn quickly here at MIT is no matter what you think, you still get 24 hours in a day. You can pray for 36, but it isn’t going to happen.

One of the best things I think about coming to college is complete freedom in learning to budget your time. In high school, although I could be out working on the yearbook, running a Student Council errand, or teaching SAT classes at night, I still have to be back latest at home around 9 or 10. In college, you can be in someone else’s dorm studying till 3, have “midnight excursions,” or just hang out till the wee hours of the morning.

Of course, you still have to fit time for other activities, going to sleep, and studying in between.

You learn a lot of these things through trial and error. For example, if you are going to stay up until 5:30 AM, you probably won’t wake up for your 10 AM lecture. Even if you did, you’ll probably end up falling asleep in every other class during the day. Another thing I learned is that you should not attempt to learn everything there is to biology the night before your exam [it’s not high school anymore ;)].

MIT is famous for its stereotype, “Nobody ever sleeps.” In fact, this is not necessarily true. One of my roommates actually gets around 10 hours of sleep every single night he’s here at MIT (that’s actually more than I ever got in high school). It’s all about budgeting your time and your priorities. I admit that I’m an excellent procrastinator, and sometimes hours seem to fly by for no reason at all – but I also know people that run like a clockwork, having time to study, hang out, and do a ton of activities at the same time.

In my opinion, that’s also another excellent thing about coming to college. Sometimes I look at the people who manage to do 3452 activities and still maintain As in their coursework, and I wonder how the heck they are able to achieve something like that. Often, the answer is stringent self-discipline and excellent time management (or just sheer genius, but we won’t talk about that =p). Those people really inspire me, to be honest.

One of the reasons why I suddenly brought this up was that a few days ago I was studying for my 8.01 (physics) test two days before the exam, doing practice problems, going over past exams, and going over my past problem sets…and the next thing I know, the sky is getting brighter and I can see the first rays of the new day. I remember writing in my personal blog about a year ago about the first all-nighter I pulled at my junior summer program. I remembered I described the feeling as “exhilarating.” Let me tell ya, when you have an early lecture and the sun is rising out the window, the first feeling that you get is definitely NOT “exhilarating.” How about slamming the books shut, jumping into bed, and waking up really groggy 4 hours later?

Sometimes I feel the same way about the three months that I’ve spent here in the US.

I’m no longer clueless as to what Course XVIII refers to, I learned more of Newtonian Mechanics than I ever wanted to (I used to think in senior year that I had bid adieu to Physics), I found out that you cannot leave a bike unlocked for more than 5 minutes (this was during the first week of college, when my bike got stolen after I left it unlocked for literally 5 minutes to go get something. Fortunately, I recovered the bike soon afterwards while I was hunting for it on campus. Turns out the thief didn’t have time to get a new lock for it so I just walked it home), and I even saw the first snow of the year a few days ago.

It’s Thanksgiving season, and I definitely have a lot of things to be thankful for. The transition to America was surprisingly smooth (I received a care package from my high school a few days ago, and included in the package was the keynote address of my graduation in June. I re-read the speech and contemplated on everything that had passed in between…), I’m learning more than I can imagine, and I’m doing something really awesome for IAP!

This January, I will be spending IAP in Madrid, Spain, under MIT’s Spanish II Study Abroad program. 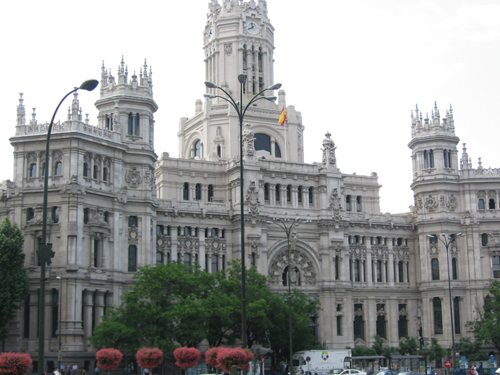 Although many people think of MIT as a purely technological school, it actually has many excellent social science and language classes (MIT is famous for its political science (Course 17) department as well, although not many people know this, in comparison to the more “famous” majors like MechE (Course 2) or EECS (Course 6)). One of the biggest departments that people overlook when choosing HASS (mandatory humanities classes) is the Foreign Language Department (Course 21F). Generally, students look at the ivy-covered university down the road and marvel at the opportunity to take classes like Portuguese or Arabic, and forget that even here at MIT, there’s a pretty excellent foreign language program (admittedly, it does only offer French, German, Japanese, Spanish, and Chinese – but for me, that’s quite enough!).

There is a lot of language-related things you can do over IAP at MIT, as there are entry-level courses offered in all areas (even Italian, which is only offered during IAP), allowing you to go straight into Level II in the spring semester. In addition, German I and Spanish II offers opportunities for the student to spend the entire month in another country, living with a host family and learning/refining your skills in the language.

It should be an amazing experience! (although I’m a little bummed out about having to miss the MIT Mystery Hunt :( )

In the meantime, I wish you all a very happy Thanksgiving. 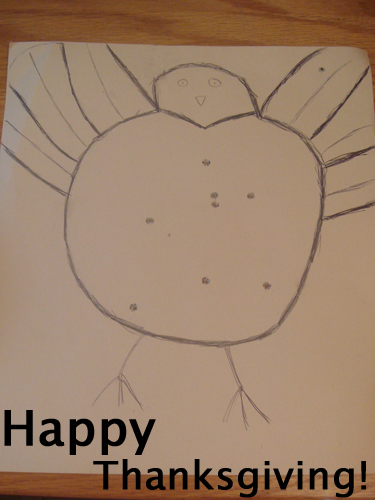 (disclaimer: despite the grisly image, no actual turkeys were harmed during the process.)