a chronicle of my failed attempts to create things that work

In a public high school with about 700 people per class, there was barely enough room to walk in the hallways, let alone room for much creativity. Therefore, I was always diligently reading textbooks, writing down notes, taking tests, filling out worksheets, completing standardized tests, counting down seconds until the next class, and over and over again. I learned to shove facts into my head, regurgitate it on a test a week later, and erase it all immediately after.

Then I got here. I’ve quickly learned that even GIR classes want you to do more than use the equations. They want you to apply your knowledge to problems that take hours and several pieces of paper. This really hurt my brain at first. It took awhile, but slowly, I got over this fear I had from even approaching the problem. It was a fear of being wrong that came at the price of making progress on problems.

Hence, a semester of Pass/No Record acted as an adjustment period, full of trial and error, just as it was intended to be. IAP rolled around, and this time, I was much more ready to take on challenges. These came in many forms. First, they were coding errors. It was the first time I’d ever touched code, and man, were there a lot of TypeError: ‘list’ object cannot be interpreted as an integer and SyntaxError: invalid syntax and IndexError: list index out of range and more SyntaxError: invalid syntax because I really didn’t know what I was doing. Yet, by the end of 6.178 Introduction to Java, I’d built a full-fledged* battleship game!**

*semi-functioning
**by “I’d built” I mean “they wrote most of the code with a few sections of skeleton code for me to fill in, all while I went to lots of office hours and pestered people for help.”

I felt so proud of my (veritably not impressive) feat. I took ownership and pride in this work, a very, very toned down version of what I’m sure mothers feel when they give birth. Like, hey, I produced that! With some help, but yeah that was me!

And then in 6.S096, Mobile Virtual Reality Development Challenge, another IAP class, surrounded by very generously donated Daydream headsets and Pixel smartphones from Google, I tried to build something, anything, that would work. My team and I first attempted to create a virtual reality platform to organize closets, pivoted to a VR game of Would You Rather?, and then Escape the Room. None of those ideas ever came into fruition. With 48 hours left before Demo Day, frustrated and tired of staring at code, we banged our heads against the wall, literally as we stumbled around in our non-functioning virtual reality space.

All we wanted was to have a script that would allow us to throw things and teleport places, and this was when we realized that’s kind of what everybody else wanted to do in a VR space too. The medium was so new for most people that they just wanted a chance to explore, to make things explode without consequences. So we created Wasteland, where people could have a place to unleash their destructive creativity. We were such proud mothers of those flawed teleport and explosion scripts. For example, sometimes, users would teleport into objects, getting stuck behind TVs and trees, and the only way to exit the game was to reset the entire system. Other times, one could look up and see chairs floating everywhere because in our rush, we overlooked adding physics and gravity components to some objects. Even though it pushed the definition of semi-functional, we pitched it like it was the greatest anger management tool the world has ever seen. Behold!

Then, the semester started, and I was as excited as I’ve ever been to attend classes. I’m currently taking:

This is very similar to my AP Psychology class in high school, but still entertaining to just sit back and appreciate different psychological phenomenon during lecture. For example, here’s a video to blow your mind about attention:

We design toys, sketch models, and make them, all lecture long. Enough said. Sometimes we finger paint and play with actual toys too.

If you want to know more, I think their website does a pretty good job of explaining what we do all day. (http://web.mit.edu/2.00b/www/) Also you can check out pictures of class and watch previous year’s playsentations!

There are times when I truly despise this class, and other times when I feel that I’m actually learning so much and it’s all going to be worth it in the end. There’s just an incredible adrenaline rush when your code passes all of the test cases. We’ve created a messaging system, step counter, and even GPS tracker all using an Arduino. If any of that sounds cool to you, I highly recommend this class, as long as you’re okay with spending your Sunday afternoons in office hours! If you’d like to see our class messaging system at work, go for it here.

Gauss’s Law, capacitors, and Maxwell equations, oh my! I love my professor (Professor Perez), and we recently discharged a 3000V capacitor (read: very loud explosion type thing) purely for demonstration purposes and stuck a Benjamin Franklin figurine in a Faraday cage, so it hasn’t been too bad yet. This one is my only GIR this semester, although I still have Biology left to continue avoiding as long as possible…

As you can see from the picture below, we spend our time tackling the most intriguing questions of this century. 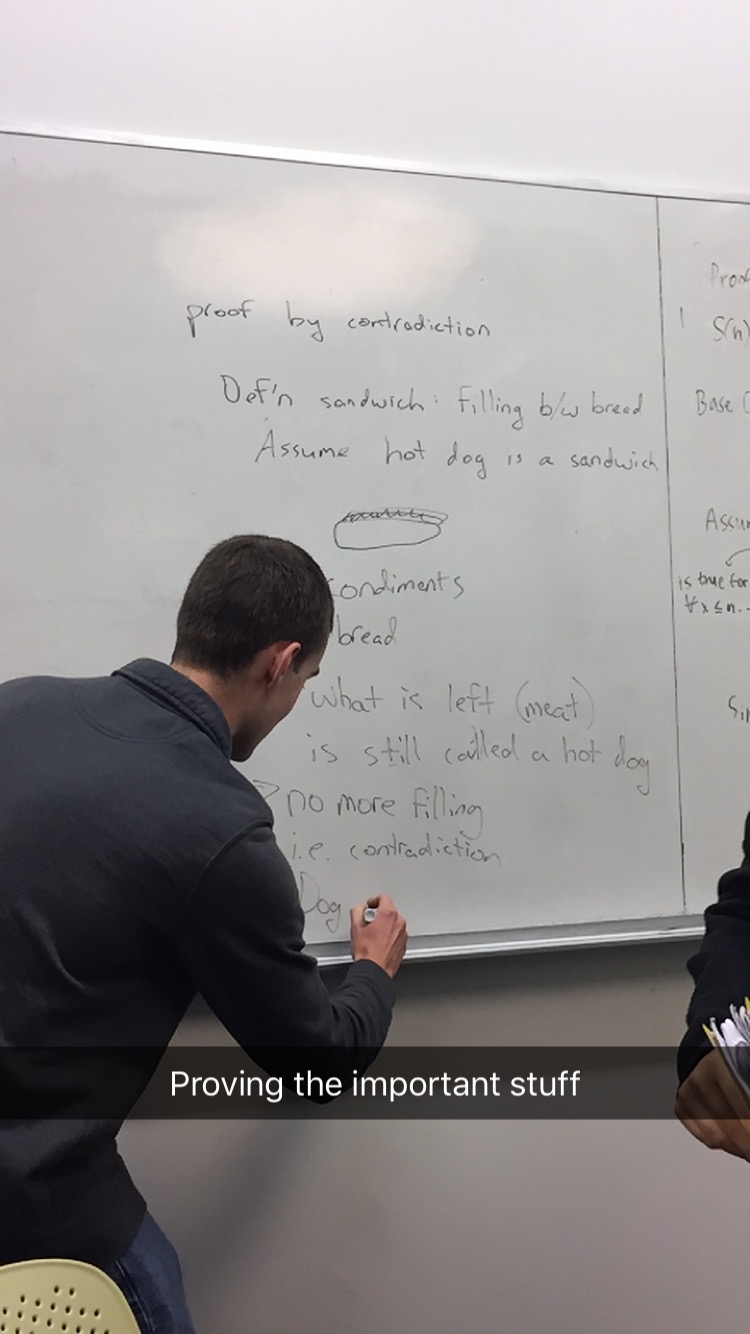 Occasionally, we do proofs and set theory and state machines. Lots of fun math-y stuff.

Even though I have no idea what my final projects will look like in 2.00B and 6.S08, I know that I’ll be so proud of them. Finally, I have classes that I wholeheartedly enjoy, which makes the tough psets a little more bearable. Or maybe I’m just a nerd and like school. Either way, I have classes that are designed to kindle the creativity again, and it is so liberating.