from rubbish to runway

“Eco-chic.” -a freshman critic from Maseeh

“The prizes were awesome, and the designers worked super hard all semester, and the lighting was super cool, and I’m really glad it all came together so well.” -a sophomore on the Trashion committee

“It was all trash! Beautiful trash!” -another freshman critic

Abstract:
Three months. Twenty-four designers from MIT, Harvard, and Massachusetts College of Art and Design. One semester to create an outfit out of––you guessed it––trash. From collecting vintage curtains from their grandparents in Poland to repurposing old mattresses, competitors showed their creative side even during the material collection. On Friday night, models walked the runway with their were judged by the other UA Sustainability committees, the audience, and a panel of judges on various criteria, including recyclability, wearability, and compostability.

The room had a purple glow and pulsed with upbeat music, with bright white spotlights shining on the main runway. I felt as if I’d walked into a trendy nightclub or an exclusive, high fashion event, which is basically what it was. There was even a Trashion geotag on Snapchat, so if that doesn’t tell you how trendy of an event this was, I don’t know what would. By the time I had arrived, there were already boxes of donated clothes that audience members brought to donate for charity and for raffle tickets to win prizes like a Patagonia backpack or a Hubway membership. I also enjoyed the tables full of delicious chocolate-covered strawberries, fruit plates (with fruits other than cantaloupe!), mini-cupcakes with Trashion logos, and delicious wraps, much of which was sponsored by local businesses. It was obvious that Trashion was dressed to impress.

The first set of dresses already blew my mind: 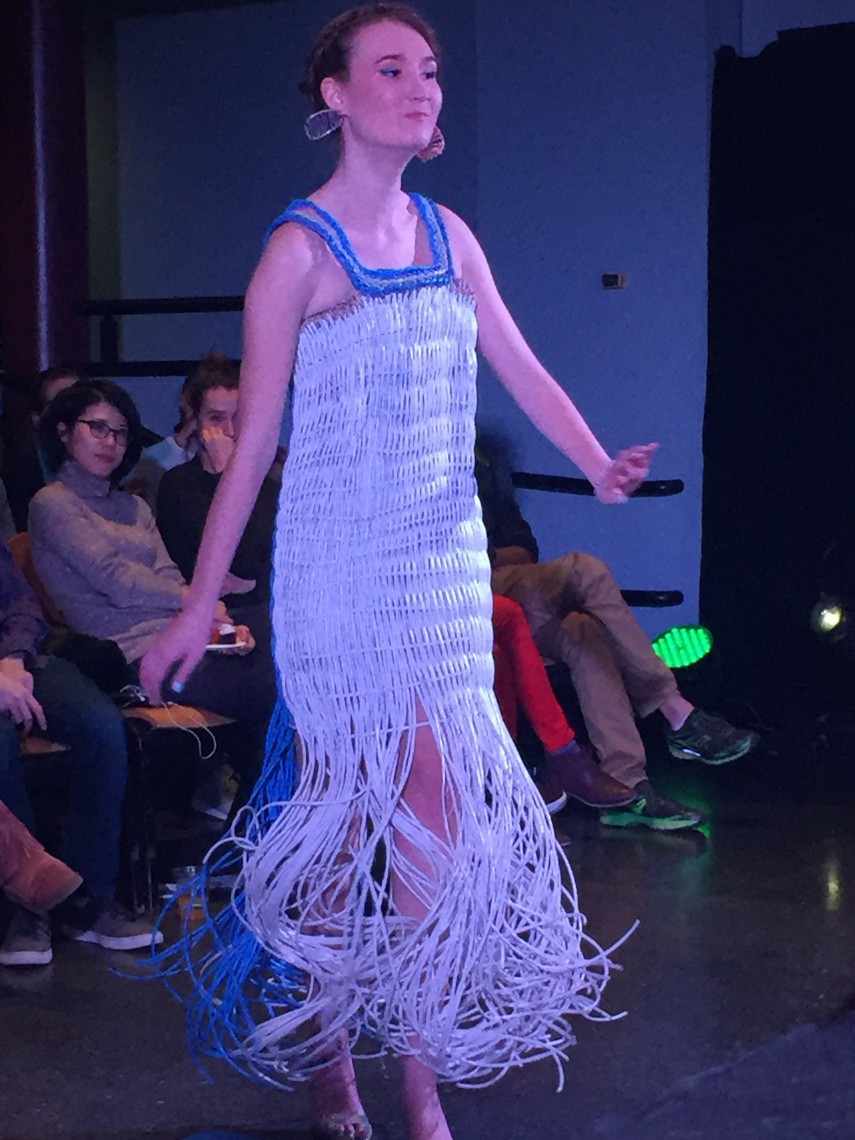 (Wired – “Our dress is made entirely out of network cables. While we used only one material, we were able to incorporate a variety of textures and patterns by weaving, braiding, and exposing the inner wires. This dress showcases the versatility of cables, which connect us to the world via the internet!” Created by Susan Mullen, Ryan Gillis, Laura Bergemann, Marcela Gillis) 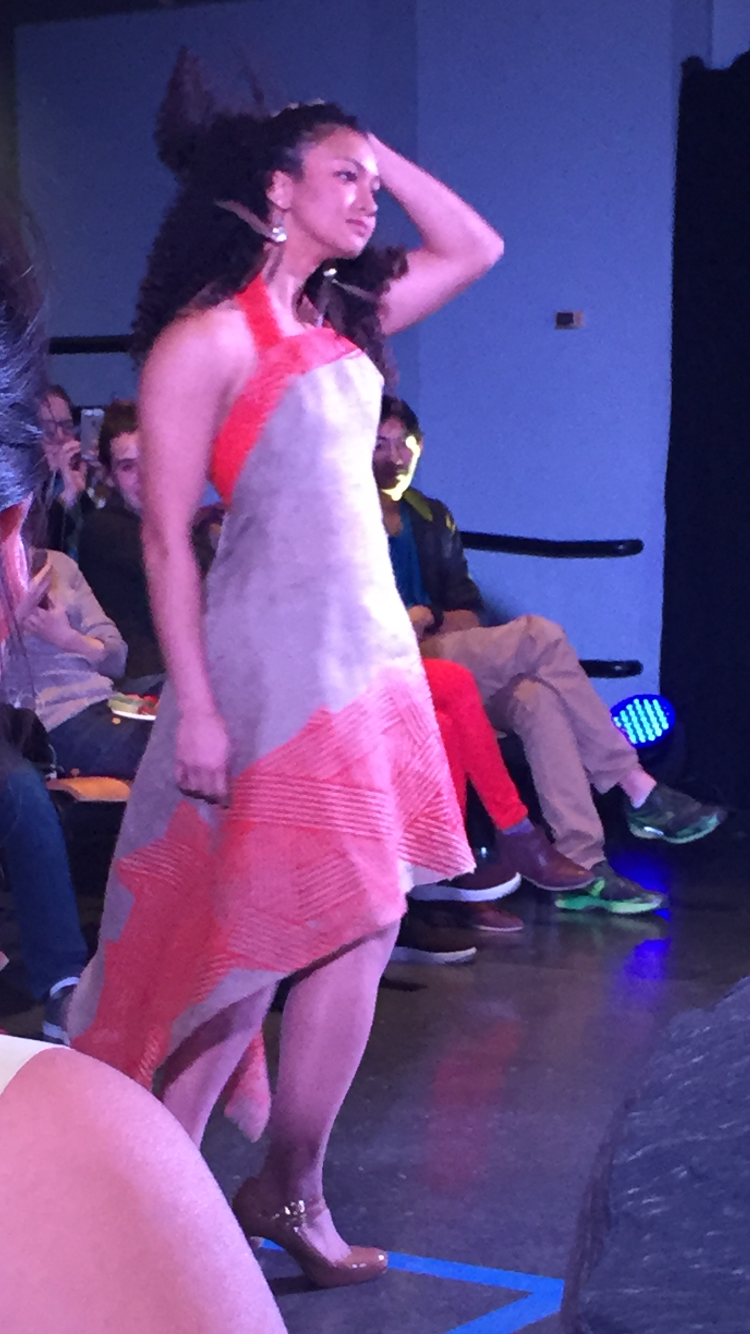 (Standing Robin – “Our design is a tribute to the Standing Rock-DAPL crisis where our Native American brothers and sisters stand alongside others, to protect our water. The red pattern and winged design is inspired by Native folklore of the sun rising upon a robin’s wing.” Created by Ronja Pereira Haase, Stefania Druga, and Alexandra Rieger) 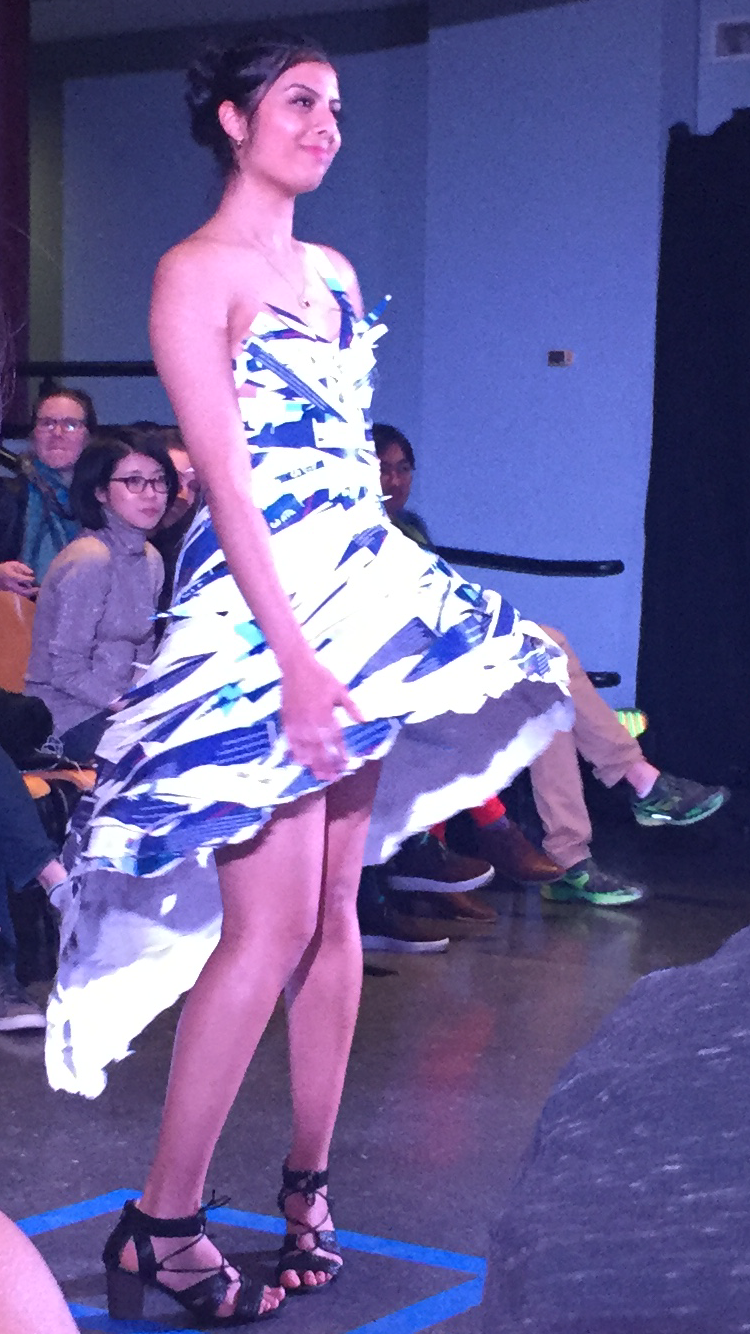 (Bain of my Existence – “Made from abandoned Bain & Company and Goldman Sachs flyers, Bain of My Existence presents a visual representation of the role of finance/consulting on college campuses. The vertical transition from frivolously ripped flyers at the expanded hem of the skirt, to the sharp, skintight and clean cut edges of the bodice parallels the increased influence of these industries on the career paths of undecided students turned wolves-of-wall-street.” Created by Cynthia Gu)

Professor Fernández, director of the Environmental Solutions Initiative (ESI) on campus and one of the judges, then took the stage to tell us about some of the environmental programs on campus. ESI seeks to channel MIT’s resources into helping solve global environmental problems, through encouraging “diverse activities in education, research, and convening.” Other opportunities included an exciting new Environment and Sustainability Minor for the Class of 2017 and younger. He also suggested interested students to join the student-led Environmental Solutions Action Corps, which works to solve the pressing environmental issues we are facing today.

Another round of beautiful outfits: 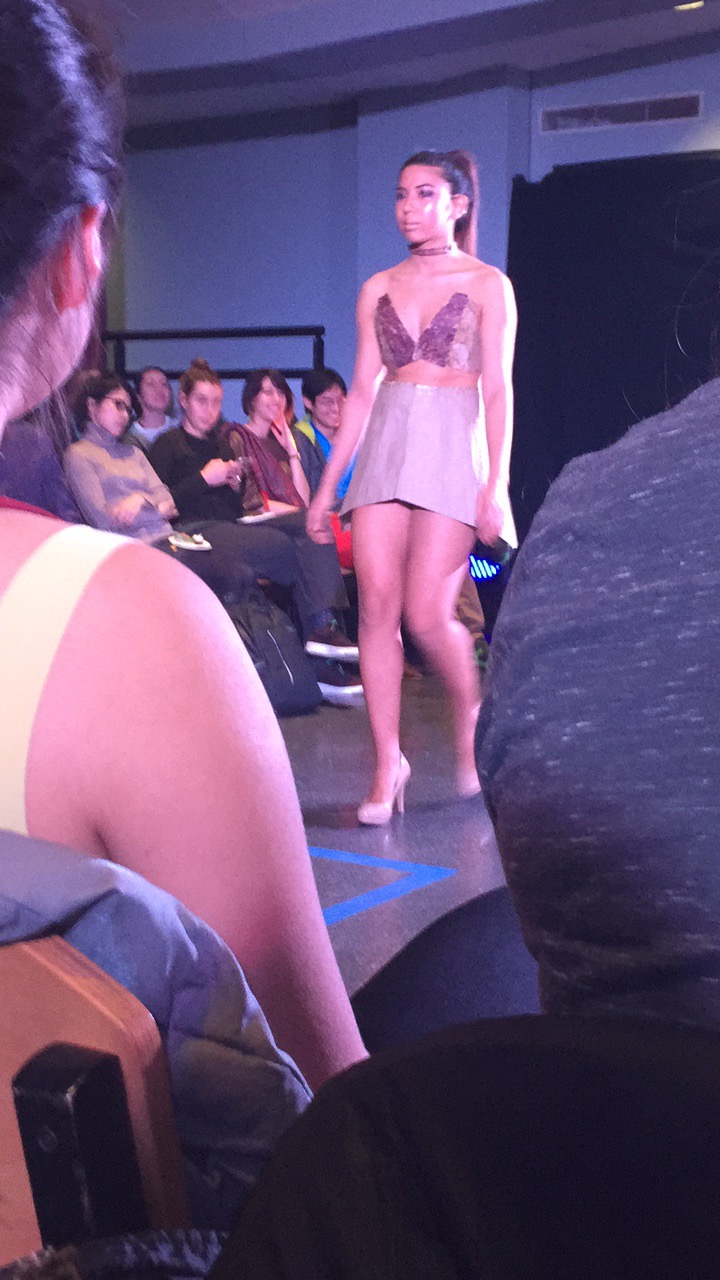 (Treasure – “My design is primarily made of brown paper bags and leaves. I wanted to capture the colors of fall and use materials I see in everyday life.” Created by Manolya Altan) 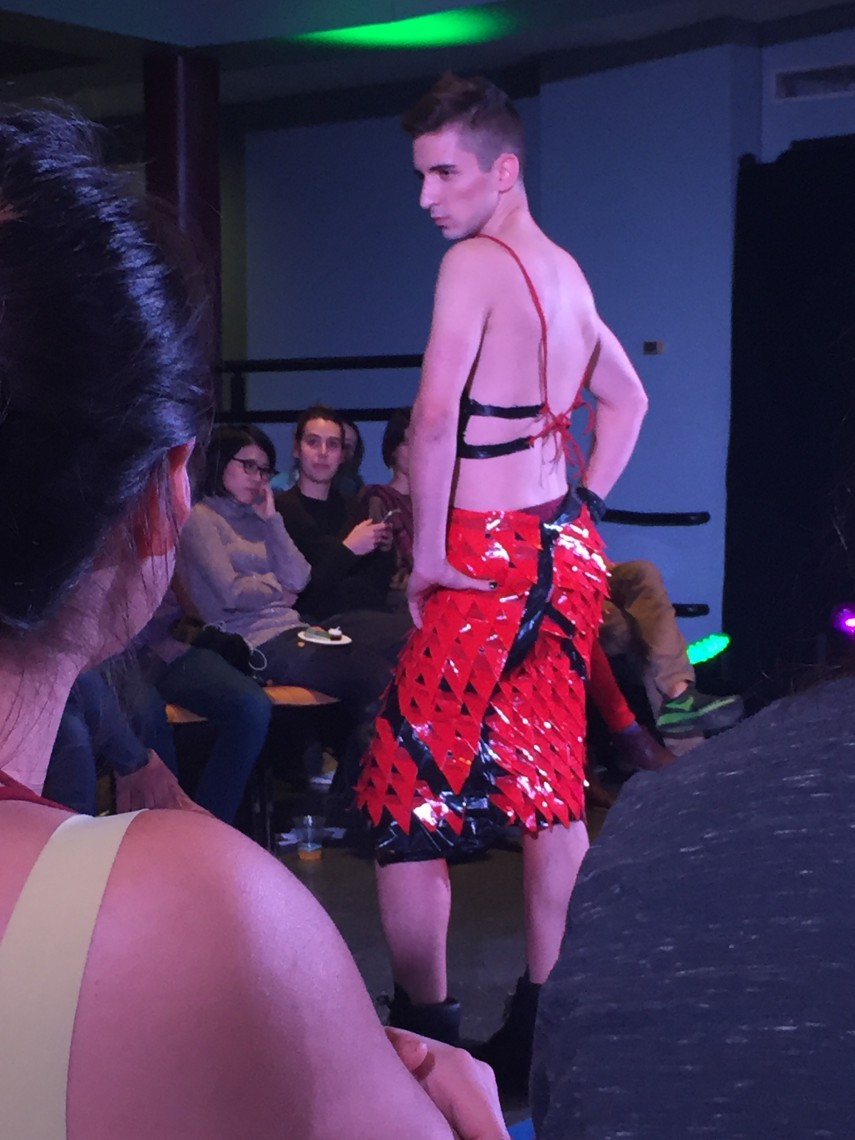 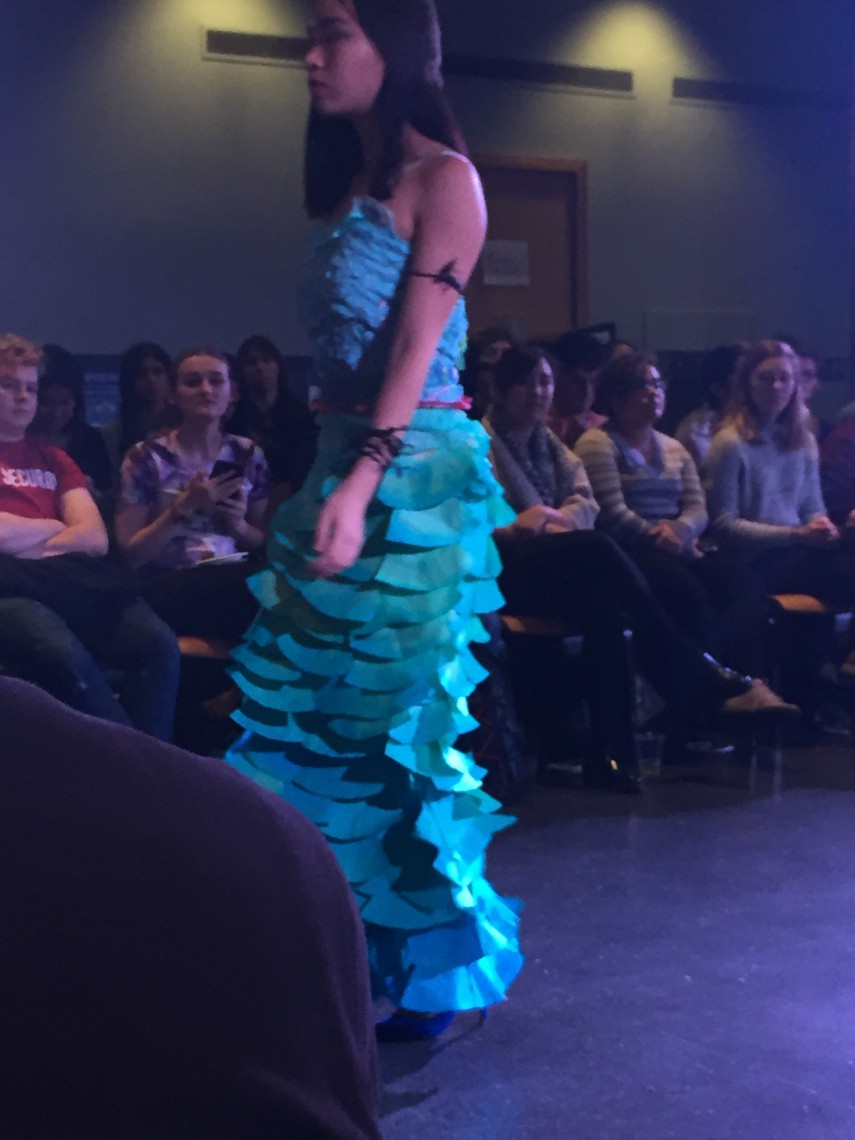 (The Forgotten Mermaid – “This piece seeks to convey the imminent, merciless destruction of our coral reefs — a vital biodiverse habitat that not only contains the most living species per square foot, but is also the primary barrier to tropical storm destruction and the beginning of our food chains.” Created by Priyanka Chatterjee)

Next up, Sam McGee, another judge, who hopes to get students more involved in the Arts at MIT. He told us about the studio on the fourth floor of the student center which offers subsidized classes to the MIT community, and opportunities for entrepreneurs that have art-related start-ups like Hacking Arts and START Studio. I visited the kilns and studios filled with pottery wheels, very impressed with the art on display as well as the space itself. Despite feeling intimidated with my lack of art skills, I asked if they have very very beginner level classes but settled for potentially taking beginner ceramics classes during IAP!

Final round of dresses: 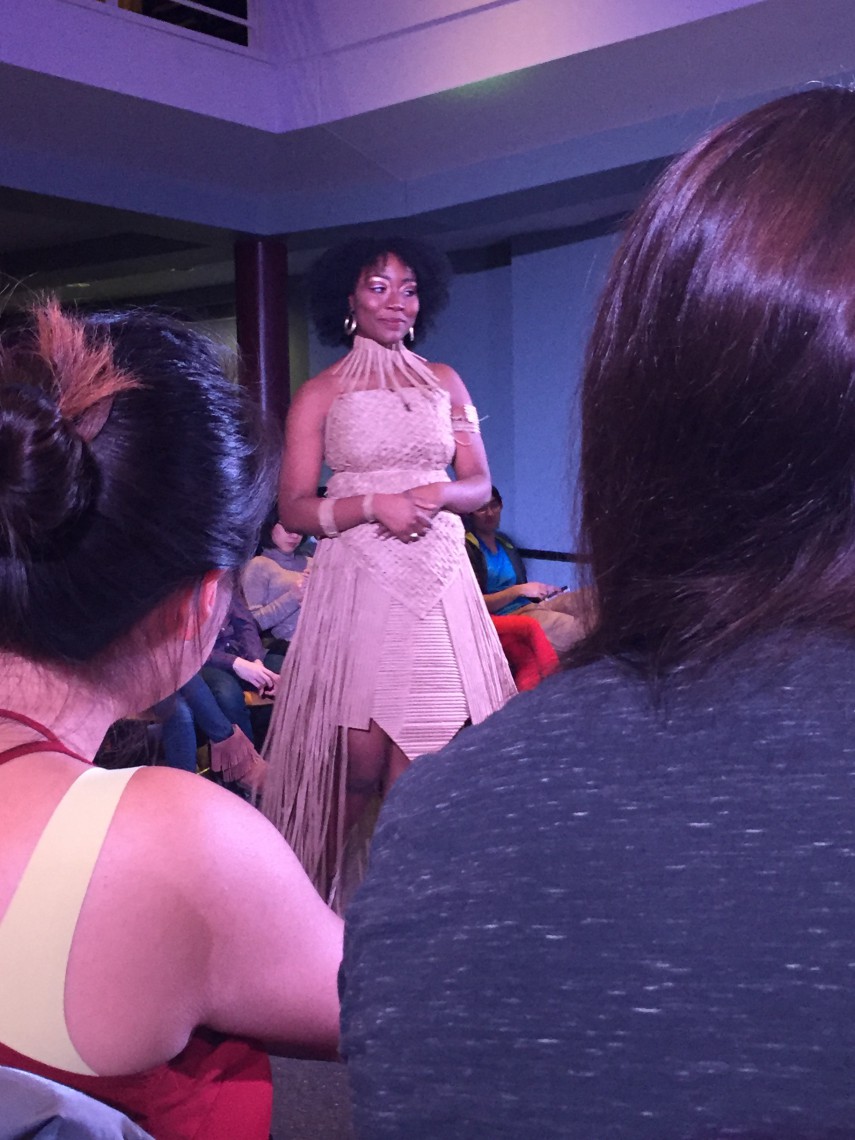 (Glamazon – “Inspired by an essay I wrote for my one of my classes this year. We were exploring clothing as technology and I wrote about a piece of armor, an ancient breast plate. In my essay I explored the idea of the breastplate being used in modern high fashion design and runway shows.” Created by Lisbeth Acevedo) 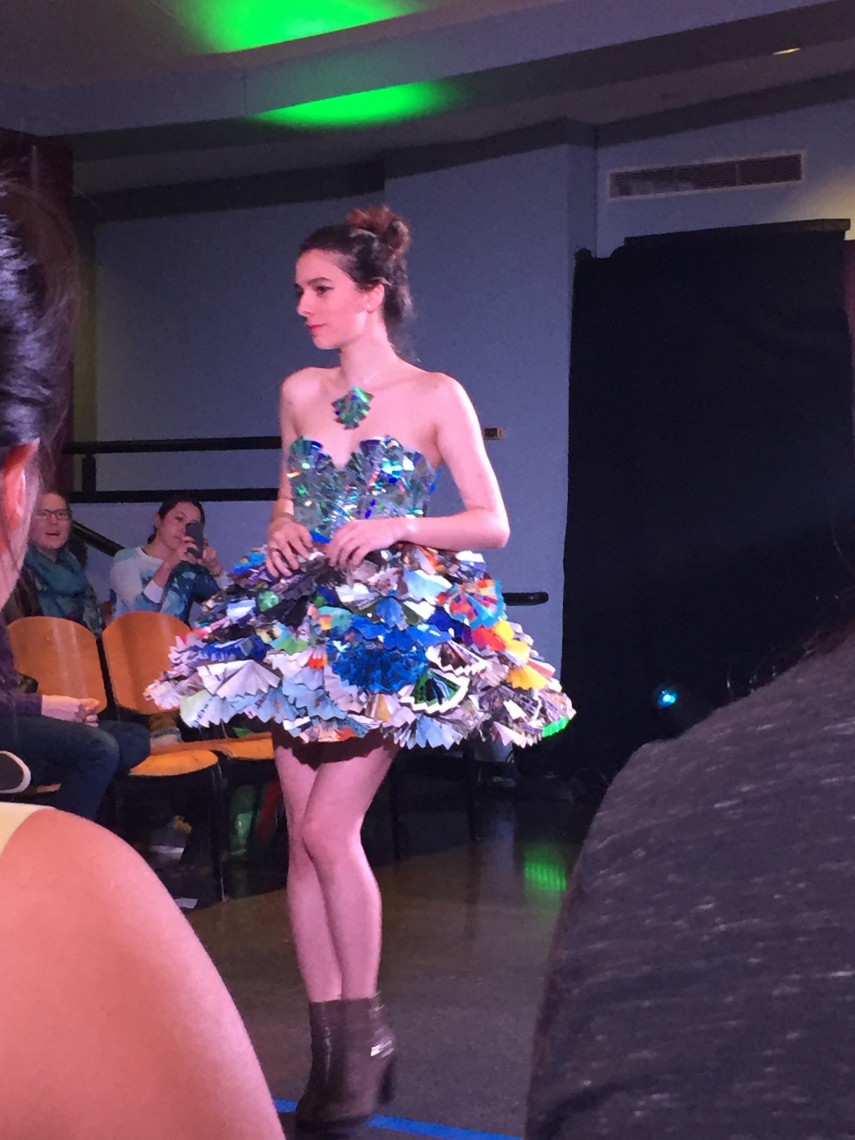 (Paper to Paperless – “Representing the transition from paper to paperless, half of the dress is constructed from recycled magazine pages from the MIT Technology Review, with the other half becoming a body of recycled CDs.” Created by Tara Lee and Andreea Martin) 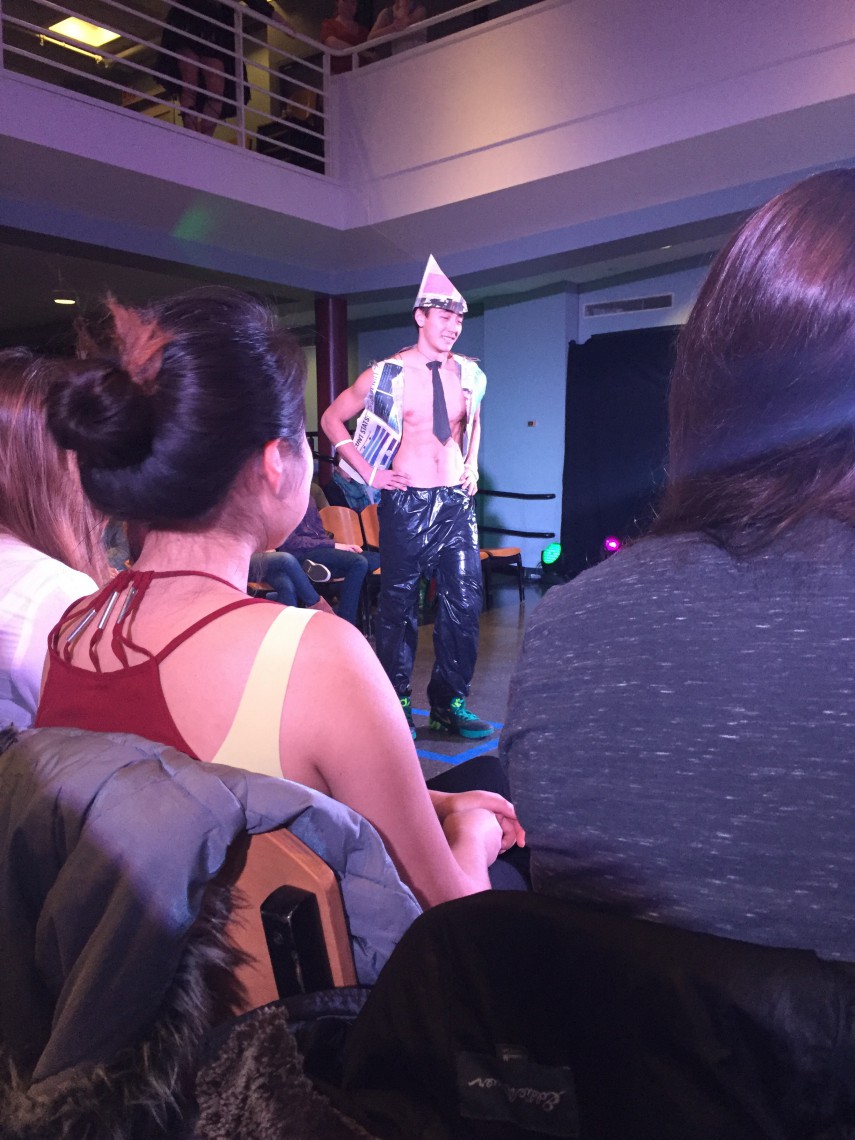 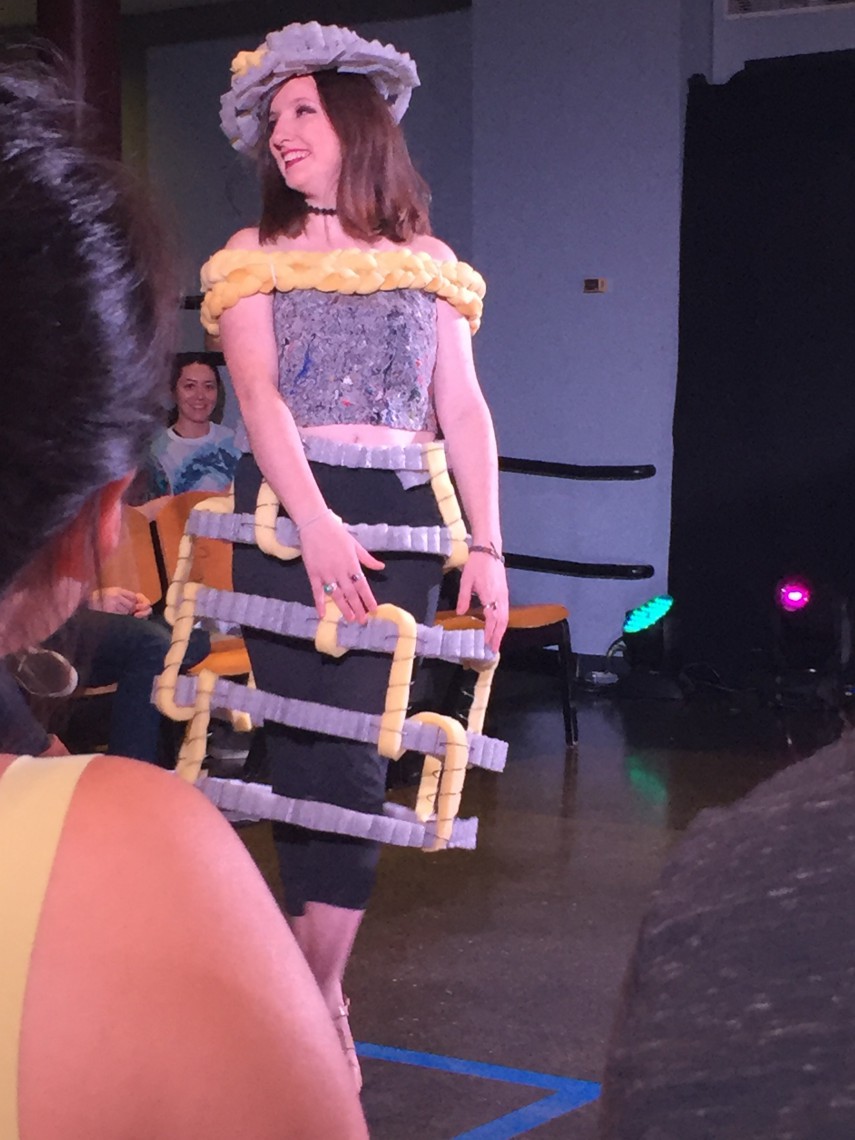 (Little Bo Sleep – “I designed this piece completely out of mattress parts (springs, foam, and polyester liners) to get people to think about the impact their household products may have on the environment.” Created by Yanisa Techagumthorn)

Following this, various committees and the judges gave away a ridiculous number of eco-friendly prizes (like over $5600 worth!), like bamboo bluetooth speakers, succulents, and Lush products, to the designers of the ridiculously amazing dresses. For example, Egg-stravaganza Egg-ucation (my personal favorite) won most compostable. Other categories included best in show, best hair and make-up, and most recyclable among many others. 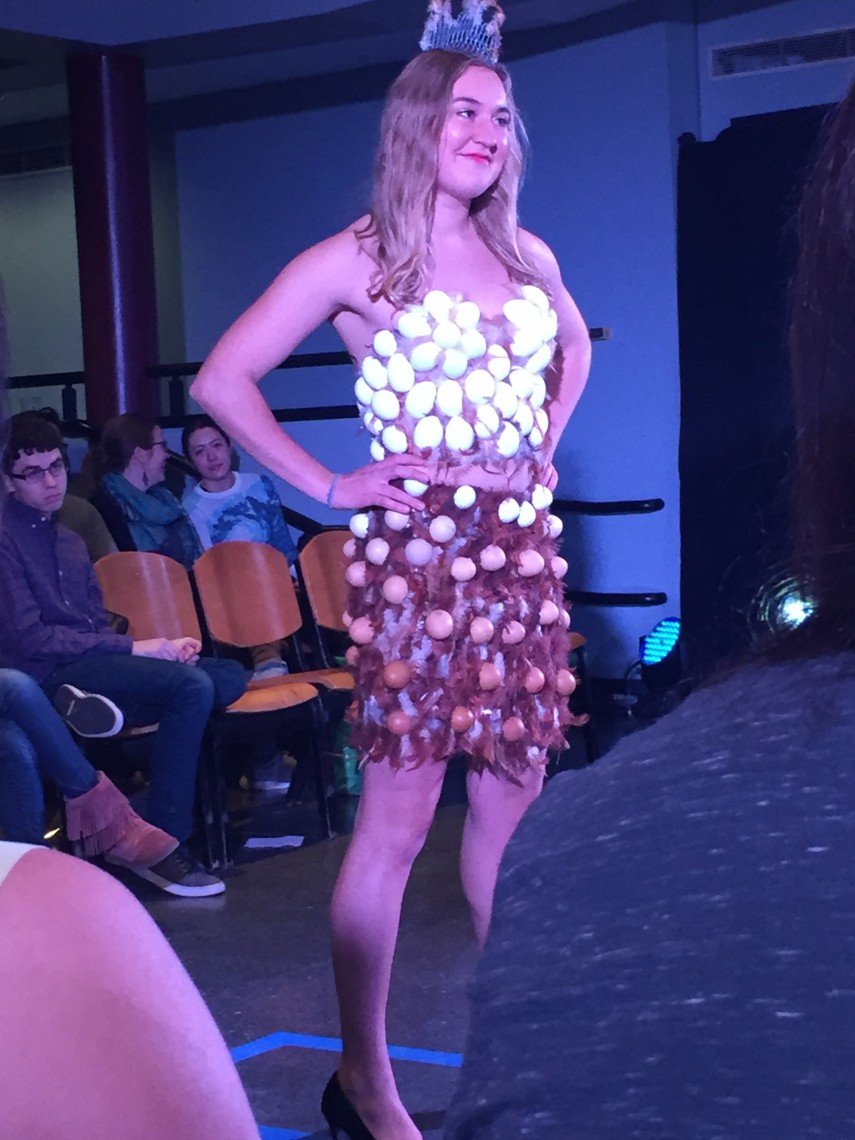 (Eggstravaganza Egg-ducation – “Made out of 110 eggshells, feathers, tape and chicken wire the dress is supposed to draw attention to both the enormous amount of food that we waste and to the terrible conditions factory-farmed chicken live in.” Created by Leandra Zimmermann)

Just another night of being inspired by my classmates. After a rough few weeks of essays and midterms as well as impending finals, this fresh take on recycling rejuvenated me to again want to try everything MIT has to offer from designing a dress to glassblowing, even if I’m horrible at it.

If you’re in some need for some inspiration, watch MIT’s American Ninja Warrior team crush all of the competition in the most recent episode! Despite being repeatedly reminded throughout the episode that nerds aren’t athletic and that we were the underdogs, (spoiler alert) we still got seven straight buzzers and swept the episode. Go tech!!

These events fill me with as much school pride as cheering on our sports teams or hearing about a new discovery from one of our labs. It reassures me that ingenuity and resourcefulness are alive and well, and despite the dark political climate and the already depressingly cold weather, there is hope for the future.