Burton-Conner's wifi went out two days ago; Evan will tell you more by the end of the week. Oh, the intrigue.

(Keep voting, guys! Remember, the poll closes at midnight PST on October 28th. Thanks a lot!)

At around 1:30 AM on Tuesday, October 16th, Burton-Conner’s internet went out. Somewhat analogous to the power outage days of yore, the internet outage hit the dorm like a tsunami – hysterical shrieks of people who were unable to submit HASS papers filled the air, as freshmen were trampled by upperclassmen rioting to reset the router. Someone on Burton 4 declared loudly that it was all due to those worthless Conner 3 residents, and a bloody dormwide revolution ignited when someone whipped their shirt around their head and declared, “YOU CAN TAKE OUR WIFI, BUT YOU CAN’T TAKE OUR FREEDOM!!” Entire monitors from Athena clusters were flung through the air and UROP proposals were set ablaze as the scent of carnage spread over all of dorm row, until all of West Campus caught the fever and engaged in a vicious and terrible battle to the death.

(Well, not really – we all just convened to complain about how we could no longer Facebook in lieu of working. Then the 133 suite made a Claymation video. Caution! Mild condiment violence to follow.

In case you’re wondering, these kinds of things don’t often happen here (the internet outage, not the Claymation videos.) The only similar event I can recall would be the epic e-mail failure of po14 last spring. Look for Evan’s blog about how it occurred later on this week.)

It’s hard to get time to yourself sometimes, but being wifi-less definitely helped. Between problem sets (that sometimes take all day), neuroanatomy exams (shortly followed by a lecture on why squares A and B are the SAME COLOR – I still think it’s all a big lie), dance practice, MedLinking almost everyone on my hall for some lack-of-sleep-related illness that’s going around, Saturday overnight shifts on the ambulance, and long hot showers trying to scrub off that Saturday overnight shift on the ambulance, I’ve barely had any time to breathe – and I’m sure you guys feel the same way between senior year APs, last minute SAT IIs and college applications. If there’s any part of the application process you’d like me to focus on in particular first, let me know! Here’s more of your questions:

Nihar queried: I was wondering how and where do students interact with their professors outside of class?? Are they easily approachable any time of the day?
(cz in my high school, we tail them throughout the school until they’re cornered and then attack them with our queries;),though I think that wont be possible for someone at MIT…will it?)

Melissa similarly queried: I’m coming from a school with a class of 200 each. That worries me – I don’t know what it’ll be like to be in a class where I don’t know everyone’s name, and not everyone knows mine! And the whole finding friends, being without family, all that… I’m worried =( Do teachers even know your name?

Yeah.. it’s kind of a scary thought, right? Throughout high school, it’s not that hard to know your teachers – class sizes generally fall around 30, and there are always seating charts to fall back on. Plus, filling out those attendance sheets every day of the year generally got them to knowing about how Brian Johnson was always cutting class, or how you were always on time (you were always on time, weren’t you?)(That’s okay, I wasn’t).

In college, though, there aren’t any seating charts. And at first, it can be really intimidating because you start out taking General Institute Requirements (GIRs), which everyone takes. So the number of students in lecture blows up to the point that if you skip class, nobody will notice except you, when you’re rudely awakened by the fact that you don’t know what’s going on (so don’t skip class! It’s different for recitation, though; they usually fall around 20 and it’s really easy to be good buddies with your TAs. I friend mine on Facebook.). So the professor doesn’t have to know you – it isn’t that they don’t want to; it’s just that they don’t have time to get to know everyone who falls out of bed and into 10-250. The responsibility is now yours to form a student-teacher relationship. Otherwise they’ll just lecture at you, and you’ll just be another face in a sea of 200+.

If you go to your professor’s office hours, which they’ll post on the class website or announce in class, they’ll eventually get to know you. If you approach them after lecture and ask how they got the number of atomic orbitals in that cycloaddition problem, they’ll remember your face a little better. But if you don’t engage yourself in making it happen, it won’t. Even if they just stand up there and lecture at you, though, you shouldn’t be intimidated not to try – your professors are still human, and most of them are pretty interesting people. Some are pretty interesting characters, like my 7.03 professor: 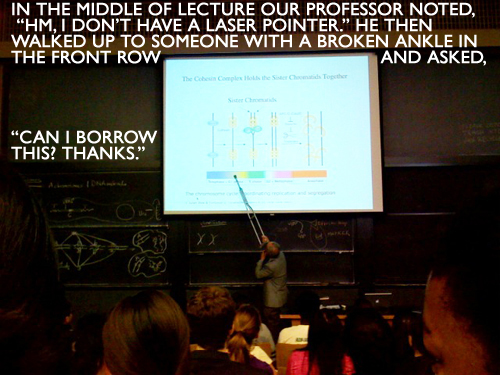 (Professor Fink is also a widely-renowned geneticist and the former director of the Whitehead Institute, as well as a pioneer in developing new techniques to introduce foreign DNA to yeast. His work set the basis for several new developments i.e. using yeast to manufacture antibiotics and other drugs, as well as studying similar pathways in more complex organisms. Recently he lead research in engineering the yeast genome to more efficiently produce ethanol.)

As you progress at MIT and declare a major, your class sizes will generally fall to around 50 or so, and lab classes are even smaller. It just depends on how big your department is. In all cases, whether you’re intimidated by your class size or not, professors are usually very approachable and willing to help.

MIT does have a meal plan! It only applies to people who live in dining halls, though, and it’s a slightly controversial because it has its imperfections. MIT has a monetary system called Tech Cash, which is basically like a debit card that works anywhere on campus (and a few places off-campus, i.e. Au Bon Pan and Domino’s), as well as for stuff like vending machines, laundry machines, etc. People who live in dorms with dining halls (Baker, Next, McCormick and Simmons) pay $300 at the beginning of a semester to help keep the dining hall open, and then get half off every time they eat there – that way, there’s no points or whatever people have left over at the semester (it’ll just carry over). An article in The Tech last year actually revealed that in order to break even you’d need to spend at least $10 in the dining hall every night, though, and people rarely do that- often times it’s just easier to grab something from the student center, or go out to eat, or order in from Campus Food.

So like most meal plans, it’s not perfect. But it at least allows some flexibility, which is good for those days you get sick of stir fry all the time.

Anonymous asked: Is it possible to get good grades at MIT if someone enrolls at the institute from a small, rural high school that didn’t prepare a student as well in math/science as gigantic suburban schools? I understand that going to college is not about just getting that GPA but learning new things. But if a student is planning on attending graduate schools, what if he/she can’t get into the schools he/she wants to because that person struggles at MIT to maintain a reasonable GPA?

Yes, it’s absolutely possible. But it’ll take dedication, patience, and a little bit of tolerance for the seemingly endless stream of people who don’t work half as hard as you and end up doing twice as well.

My high school preparation was certainly not perfect. I’ll be honest – I picked up bad study techniques because I could get by, even excel, by coasting for weeks at a time and then cramming two nights before the exam. It doesn’t work at MIT. The way you approach your work is often times much more vital than the background you’ve acquired, as your work ethic is a product of your own doing and your background isn’t. And while a good GPA is an important factor in applying for grad schools (I certainly can’t speak for all schools, since I have little personal experience in this area), I’ll guess that it’s probably similar to applying for undergraduate programs, and your GPA is just a number. It puts you in a category that may qualify you for that school, but won’t necessarily be a deal breaker.

Either way, if you’re thinking about passing up applying to MIT just because you’re worried your GPA won’t be as high as it will be at other schools, you should know that 1) that isn’t what you come to MIT for, and 2) that isn’t the only things grad schools are looking for.

Paul has a couple more things to add. Paul?

Basically, the admissions department is not going to admit a student who, in their opinion, cannot shoulder the workload at MIT. As I now know firsthand, MIT is a hard school – but the kids who get into MIT are also pretty smart…and they know how to ask for help when they need it.

P.S. The Advising & Support page also has some entries that you may find useful.

Constantin (not Istanbul) pondered: How does the application fee waiver work? Do I have to wait until the letter from my school reaches the Admission Office and only then submit my application?
anon also pondered: is it possible to submit the part 1 of the application by choosing the ‘fee waiver’ option yet not having sent the fee waiver request yet?
Ralph continued to ponder: How should we intimate the colleges(not necessarily just MIT) that we’re sending in a application fee waiver request?(email and tell them?what if i don’t get a reply? Should i still go ahead and send in the request?)
Constantin – no! Anon – yes! Ralph – Nance recently addressed this question; Jen ’11 (who lives next door to me and bikes like fourteen miles a day) also articulated this fully:

Collegeboard offers application waivers to students who qualify for the SAT waivers, which can be used at good number of colleges. Otherwise, you can just get a letter written by your school counselor or maybe family accountant saying that paying the application fee puts a financial burden on your family. I recommend you list some numbers if you can (otherwise they might wait until they see your FAFSA/CSS profile?). If you’re smart, you can distribute the collegeboard waivers and school counselor/family accountant letters among the majority of your colleges and only end up paying for a few. You’ll save your family a LOT of money (because as we all know, the whole college applying-to can get pretty freakin expensive).

But don’t send in waivers or requests for them if your family’s relatively well off.

Hope this helps! And good luck with the application process guys – don’t forget to breathe once and a while.

Amen to that. Breathe, guys – you’re almost there.