The land of the free and the home of the internet by Mollie B. '06

Back to life, back to the internet

The ADD recap of my Christmas break: Ohio. California. Maine.

I am finally back from Maine, where I managed to survive on only dialup AOL (seriously, 41 kbps? WTF.) for five and a half days. This is probably the longest I’ve gone without real internet in a very long time — when I went to Jamaica for a week sophomore year with my friends Rose ’05 and Swapna ’05, at least I had internet cafes. To all of you on dialup, I sincerely apologize for the large size of my blog banner. Holy cow.

To be totally honest, the major reason I was freaking out about the loss of the internet wasn’t my inability to write amusing new blog entries or chat on AIM. See, I’m starting to get interview invites from some of the graduate programs to which I’ve applied, and since many of the programs are Far Away, I need to make travel arrangements. I’m supposed to be in LA in two weeks to visit UCLA’s ACCESS biology program… and they haven’t given me the name and number of their travel agent yet. (One reason to go to grad school rather than medical school: Grad schools pay for your airfare and hotel when they invite you to interview. Med schools don’t generally.)

So maybe I’ll just have to walk to LA. I’m sure it will be awesome. At any rate, they need to get to me soon — I just checked the Boston-LA flight I’d need to take, and there are only two window seats left!

Random thing I meant to write about a long time ago:
At the end of this semester, I was glad to open up WebSIS (our online student information system) and see that I’ve finished all 17 of my General Institute Requirements (GIRs). 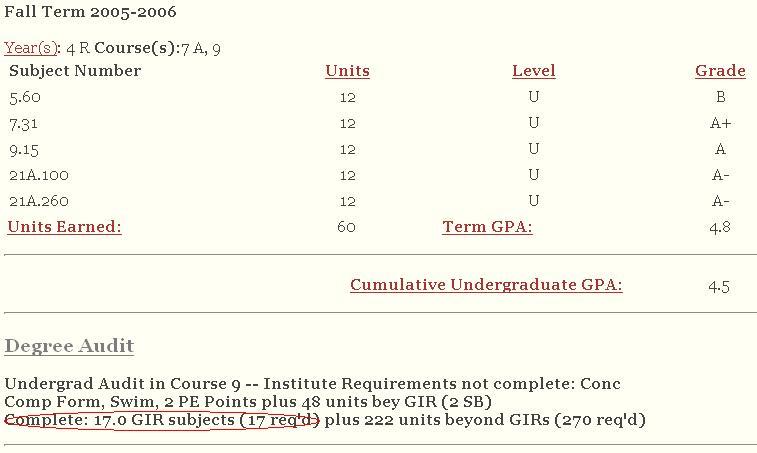 Done with humanities classes! No more communication-intensive classes! No more Institute Labs!
(Allow me also to take a teaching moment regarding my grades: first semester freshman year, I got three C’s and a B. True story. It is possible to succeed at MIT even if your high school preparation, shall we say, sucked.)

Question Time:
1. Although we’re certainly not censored here on the blogs… I think naked pictures of Timur might be cutting it a bit close. Hee.

2. Chris asked how I spent my summers. The summer after my freshman year, I lived in Washington DC with Rose ’05 and worked at the National Institutes of Health, which was a great first lab job. With the NIH experience under my belt, I got a UROP in Professor Sheng‘s lab, where I’ve worked for the past two summers (and, for that matter, the past two IAPs and the past five semesters! and a bunch of federal holidays too). I thought about getting an REU, or an internship in pharmaceuticals (or going back to the NIH), but ultimately chose to stay in Morgan’s lab for both summers. I certainly know people who have done REUs and really enjoyed them, but for the career I’m looking at (academic biology research), staying in one place/getting published >>>> variety in lab jobs. Plus I have my own set of pipetmen in Morgan’s lab.

2. Anna agrees with me that the LA to Boston red-eye sucks. I think they ought to turn off the TVs after midnight or something. (Sort of unrelated sidenote: Adam almost lost his Mitra-designed Brass Rat on the flight. But some helpful flight attendants helped him locate it a few rows away.)

3. s asked if it’s necessary to be computer-proficient to come to MIT. It’s definitely not, although I get the feeling that most people pick up a certain degree of proficiency once they’re here. Personally, I’m not really all that computer-savvy — I keep my computer in tip-top shape and all, but I write terrible HTML. And my darling boyfriend ’07 can’t even run a virus scan on his computer. I guess MIT is an environment where you can learn anything and everything about computers, but what you choose to pick up is your own concern. (And, may I add, for those times when disaster strikes and your computer’s magic smoke is leaking out, we have an absolutely fabulous team of student computer-fixers/magicians at the Computing Help Desk. They saved my beloved desktop last summer.)

4. Jennifer, like any rational person, bailed on the Rose Parade after about 3/4 of it had passed, which is pretty much what we did too. My brother’s band was about 2/3 or 3/4 of the way through the parade, and the band booster group left en masse after they had passed. I felt bad doing it, but ohhhh, so much rain. My brother, incidentally, was completely unfazed after his five-mile march through the monsoon. Sometimes I’m not sure if he and I are related.

5. Anonymous asked if I had heard from any grad schools yet. Well, I have two interview offers — one from UCLA’s ACCESS program (linked above) and one from Michigan’s Program in Biomedical Sciences. Most programs had deadlines of Dec 15, so I’m not planning to hear from most of my schools until late January. Keep your fingers crossed!

6. My notebook, like Eric’s, is not actually portable. In a generous mood (and hoping my parents will get me something sleek and lightweight before grad school), I gave my clunky dinosaur of a laptop to my brother, who was enthralled. One man’s trash and whatnot, I suppose.