If I have seen farther, it is by standing on the roof of the Green Building.

It’s sort of funny how some of the most interesting things happen completely by chance. Case in point: About a month ago, I was heading from my lab to the tennis courts on the other side of campus to play a quick game with my friend Cody ’11. As I was passing by the grassy “Dot” beneath the Green Building – one of MIT’s academic buildings, home to the Earth, Planetary, and Atmospheric Sciences Department – I noticed a few people standing around a tripod of some sort. I wasn’t terribly concerned, until one of the people started waving at me – it was Cody! I hustled over and found that Cody and I had both stumbled into an impromptu photo session on the Dot being held by a mutual friend, Christian Ternus ’10, accompanied by Liz ’11 (at MIT, we always put our class year by our name, even when speaking in casual conversation :D). Ternus had recently gotten hooked on high dynamic range (HDR) photography, so he had been roaming around campus taking photos.

So, of course, we said yes. Although it’s hard for me to recreate the impression I felt from having such an amazing view of Cambridge and Boston, hopefully these photos will help. All photos graciously provided courtesy of Ternus, who has put them under a Creative Commons Attribution-Noncommercial-Share Alike 2.0 Generic license. Just in case you were curious. ;) 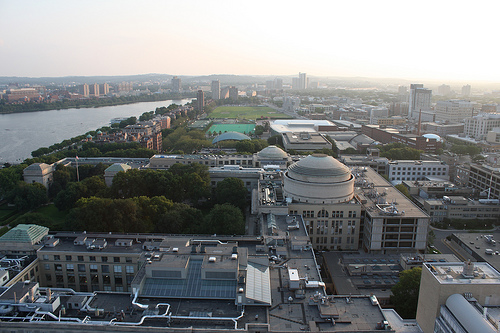 An aerial view of Main Campus (including MIT’s trademark twin domes) and West Campus. Main Campus includes most of the original academic buildings, while West Campus consists mainly of dorms and other student-focused buildings (such as the Student Center, the Chapel, Kresge Auditorium, and the athletic facilities). 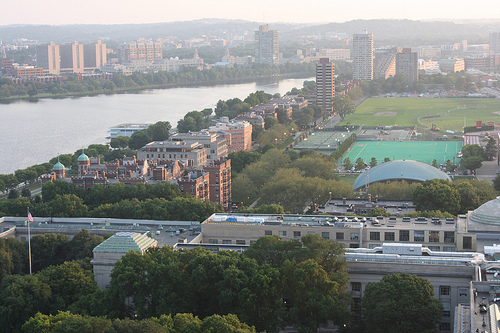 A zoomed-in shot of West Campus, including Kresge Auditorium and Dorm Row. From foreground to background (east to west), the dorms are New Ashdown, McCormick, Baker, Burton-Conner, MacGregor, New House, and Next House. 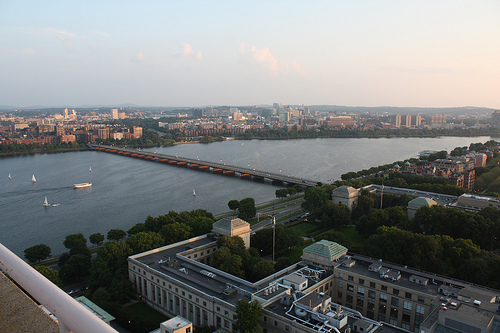 The Harvard Bridge and the southern end of Killian Court. Despite its name, the bridge doesn’t actually touch Harvard; rather, it connects MIT’s campus to Boston proper. 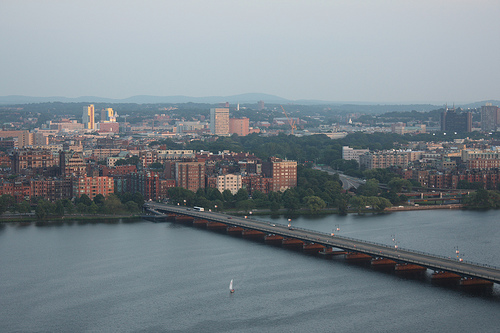 Another view of the Harvard Bridge and Boston’s Back Bay neighborhood. 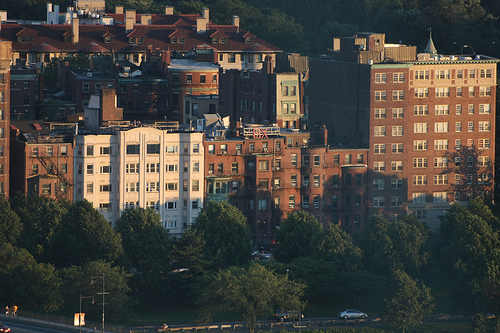 At one point, Ternus asked me if there was anything in particular I wanted him to take a photo of. I responded by pointing across the river towards my fraternity – which you can see in the photo above. (My house is the third brownstone to the right of the big white building.) 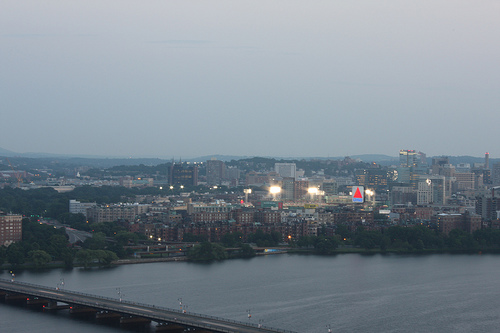 Fenway Stadium, complete with lights – there was a game playing that night. 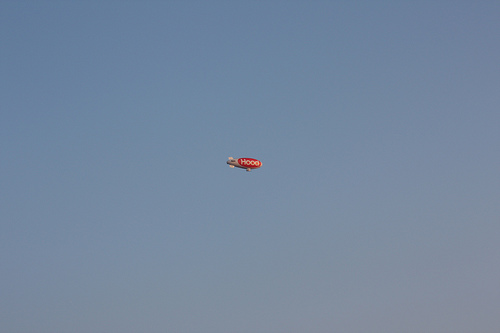 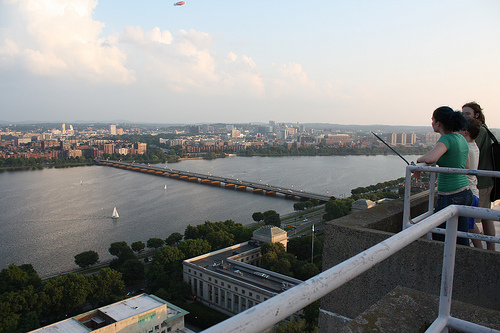 Another shot of the Harvard Bridge, featuring Liz, myself, and Cody. 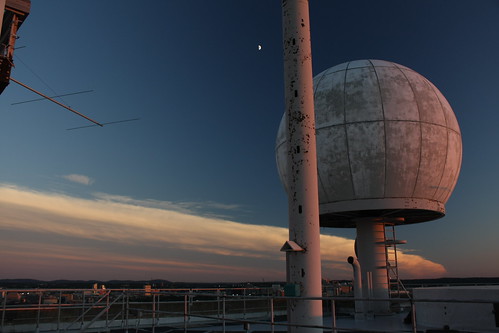 An up-close view of the mysterious weather dome on the Green Building, which has been the target of a handful of hacks, such as the Magic Pi Ball in 2001. 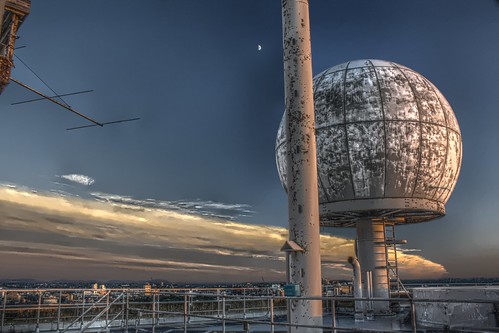 The same photo, but with more extreme tone mapping. 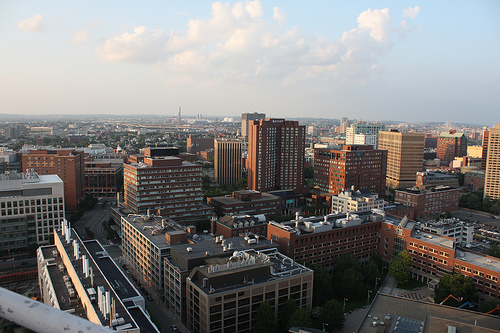 A view of the city of Cambridge, with some of the East Campus buildings (including MIT Medical) shown in the foreground. 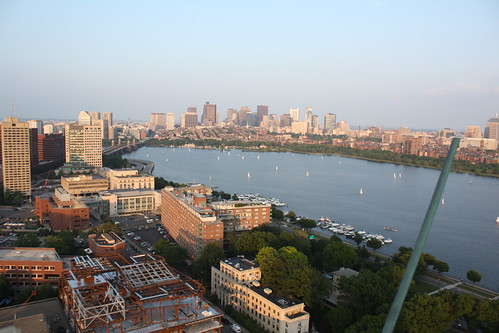 A shot of the downtown Boston skyline; Senior Haus and the under-construction Media Lab Extension are visible in the foreground. 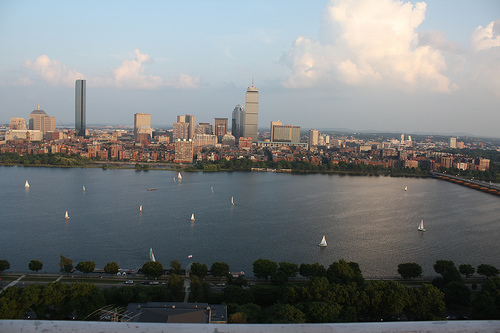 A beautiful shot of the Charles River. 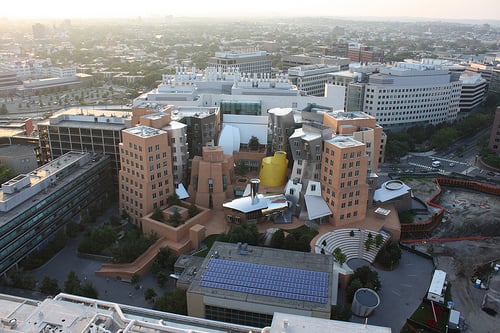 An aerial view of Stata Center, which is occasionally mocked as one of the weirdest looking buildings on campus (even by MIT’s standards). From this view, though – which is undoubtedly how the architect looked at it when he was making his models – it almost seems to make sense. 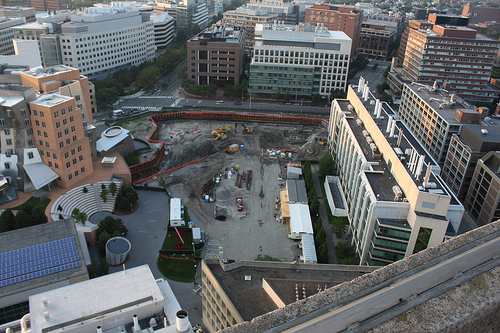 The site of the future Koch Institute! Nestled between the Stata Center and the Biology Building, the Koch Institute will officially be numbered Building 72.

Although Cody and I left a little before sunset in order to play tennis, Ternus and Liz stayed on the roof and took some more photos, which turned out to be some of my favorites. 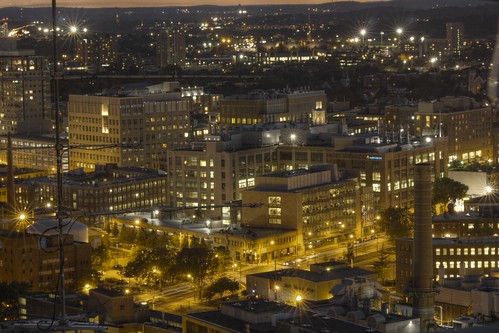 “A series of 8-second exposures of Massachusetts Avenue blended into HDR, with the W1XM antennas in the foreground.” 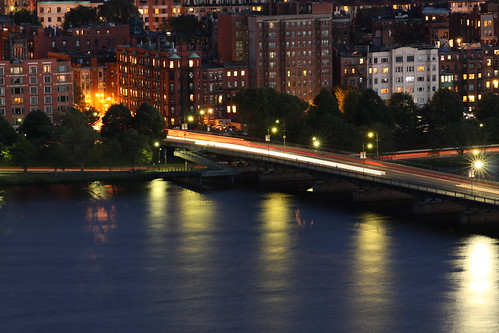 Another long exposure on the Harvard Bridge.

Finally, a nearly 270-degree panorama of Boston and Cambridge. You can see the original, full-sized 1.5 megabyte photo here – although be aware it might crash your browser. :)

For even more photos, feel free to check out Ternus’ flickr page.

35 responses to “The Top of the World”