These are a few of my favorite things by Mollie B. '06

Unseasonably gorgeous February days
Last Thursday, for whatever reason (*cough* global warming *cough*), it was 54F (12C) and sunny. I got out of 7.28 (Molecular Biology) at 1 PM, stopped by the lab for about 15 minutes, and headed out to Boston for some happy sunny day shopping. 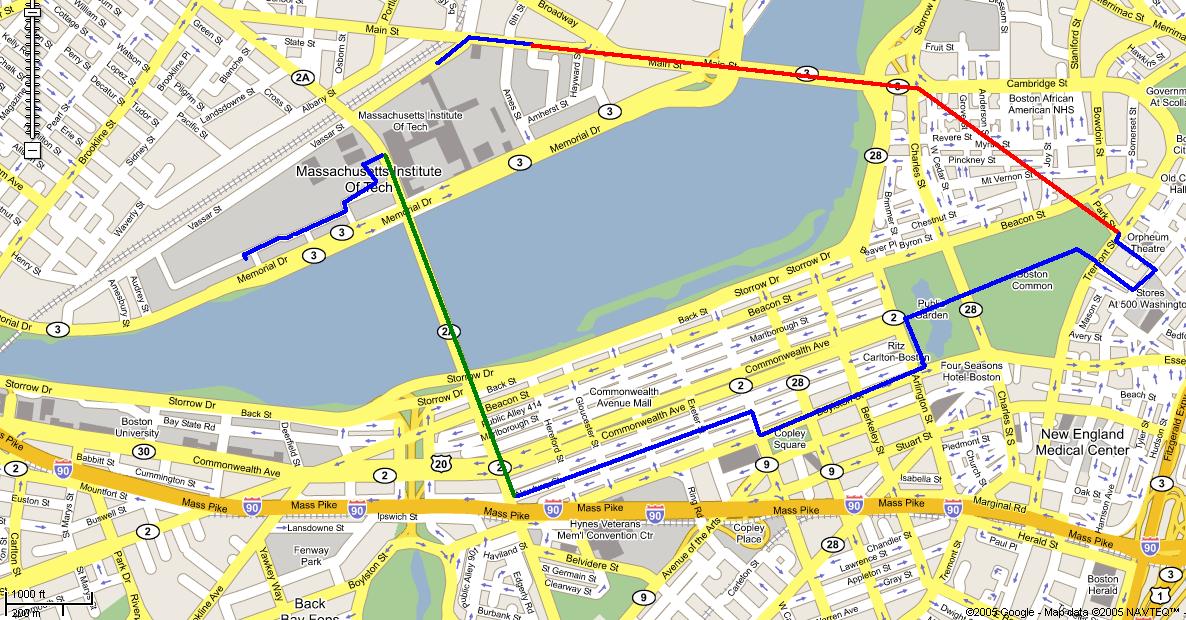 (Key: Blue is walking, red is subway, green is bus)
I started off in the Downtown Crossing shopping district, then wandered through Boston Common and the Boston Public Gardens. There’s more to see when there’s not snow on the ground, but I still got to see some crazy ducks in the Public Gardens.

After I left the Public Gardens, I walked down Boylston and Newbury Streets; both are streets with a high concentration of shops, restaurants, and salons (read: girly girl paradise). I bought a cute skirt at Anthropologie and some candy for Adam at Sugar Heaven, his favorite candy store. Mostly I just window-shopped and enjoyed the sun.

MIT teams winning
The MIT basketball team smote Babson tonight, 49-40, to advance to the conference semi-finals. The cheerleaders got to stunt, yell, and throw free t-shirts to the crowd. It was a great game — the last one I’ll ever cheer for as an MIT cheerleader — and I think I won’t have a voice in the morning!

Ridiculous grad school stuff
I got my official acceptance letters to both MIT and Harvard today. Both came with stipend information (MIT, $27,440; Harvard, $28,008 — woo, I’m going to be rich!) and hand-signed acceptance letters (classy). Harvard’s came in a commemorative folder, which made me giggle.

Pink ski pants
My skis-better-than-he-walks boyfriend has been on a campaign this winter to get me to learn how to ski, even going so far as to buy me a poofy pink ski jacket (“There. Now you look like a real ski girl.”) for my birthday. So far, though, I’ve managed to weasel out of ski lessons, since I don’t own a pair of ski pants.

So this weekend, he found and purchased some pink ski pants. Well-played, boyfriend. Well-played.

Mollie…what if you’re a biology person who’s not very good at maths…would you get in? And suppose you do, could you survive here:)?

It depends on what precisely you mean by “not very good”. Certainly you don’t have to be an IMO medalist to get in/survive. But you should have a solid math background, definitely with math through precalculus and ideally through calculus — MIT doesn’t admit by major, so prospective biology majors are held to the same standards as prospective whatever else majors.

To survive here, you’ll have to be able to pass the GIRs, which include two semesters of calculus (differential/integral and multivariable) and two semesters of calc-based physics (mechanics and E&M). I’ll note that I’m not a huge fan of math, but even I thought multivariable calc was kind of fun. Most upper-level biology courses don’t require much/any math, although 5.60 (Thermodynamics and Kinetics, required for a biology degree) does require calculus knowledge.

I’ve been think, most of the UROPs I’ve read about are in biology, chemistry, or engineering of some sort. I haven’t heard about a lot of physics UROPs. How hard is it to get a UROP in physics? Since it’s more theoretical, do the professors require that you’ve taken certain courses before they give you a UROP.

Far be it from me to say what precisely physics majors do in their UROPs, but a list of helpful hints from the physics department is here, and the list of faculty interests is here. I promise to find a better answer to this question the next time I run into one of my course 8 friends (Fadam ’07, my favorite local course 8 major, is at the MacGregor House Committee meeting right now, since he’s our president).

3. About building numbers — They’re a terribly logical thing, since there is a sort of coordinate system for buildings on main campus, and you can locate a building without necessarily knowing where it is a priori. And the buildings do all have actual names — the biology building, 68, is the Koch Biology Building after a generous alum — but if you came to campus and asked for directions to the Koch building, I don’t think anybody would know what you were talking about. So the buildings do have names, we just don’t memorize those.

4. And about class numbers — MIT is a fairly small place, and there aren’t a huge number of majors. When my friend Dave says that he’s taking 2.008 this term, I actually do have a vague idea of what class he’s taking, even though I’m not a mechanical engineering major.

12 responses to “These are a few of my favorite things”