i may have got this idea from tiktok

I mentioned this in my last post, but I’m graduating soon! At the end of this week, to be precise. Once January 29th comes and goes, I will no longer be a student blogger, and will have graduated to the nebulous realm of cruftiness.

So, in the name of going out strong, I’d like to put up a post every day from today until Friday, totaling 7 days in honor of – you guessed it – Final Fantasy 7. These posts will be about mostly random things that I felt I wanted to write while I’m still clinging onto the precious status of MIT student – reflections on my experience over the last 3.5 years, and perhaps a few forward facing posts as well.

This is post 1/(some number >= 7)⁠01 my goal is to cover the entire front page of the blogs but we'll see if i can write that much , and of course, I’m going to be starting off by memeing. On the brink of graduation, I’m able to look back at all the classes I took and reflect on how much I wound up liking them in the context of all my other classes. It’s easy to hate a class one semester because it seems like literally the worst thing ever, but there’s always a worse class lurking out there in a later semester.

So, without further ado: 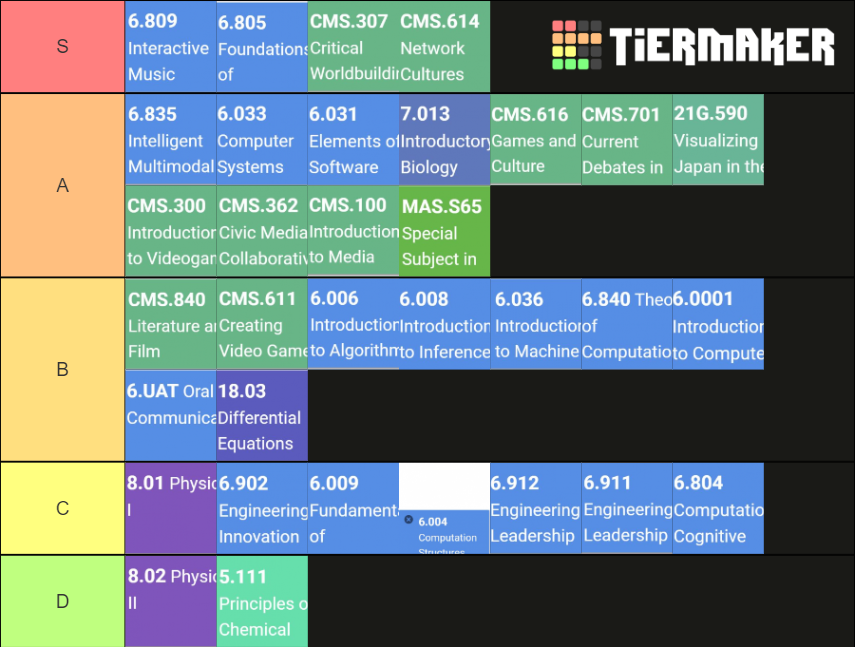 Here’s approximately what the tiers mean in my mind:

S: My absolute favorite classes at MIT. I enjoyed the material, the professor(s), the assignments, and the cohort that I happened to take the class with. I left the class feeling like I had made/written something really cool that I wouldn’t have gotten the chance to otherwise.

A: I liked these classes! I would recommend them to anybody interested in taking them. They weren’t quite S-tier because I either didn’t particularly care for the class format, or the assignments. I just didn’t connect with them quite as much as I did with the S-tier classes.

B: These classes were fine. Most of them had interesting material that I just didn’t particularly care for or find applicable…or they were just classes that I struggled a lot to grasp conceptually.

C: These classes were just…meh. Some of them were just absolutely ruined by a virtual format, or I just…didn’t like them. With the notable exception of 6.004, I cannot really name anything concrete that I learned from these classes.

D: Don’t speak to me about these classes…literally hated them…garbage…bad…

What’s interesting is that at the end of the day, I actually didn’t hate as many classes as I thought I did. It’s really easy to feel burned out and jaded about a class at the end of the semester, when all you want to do is just yeet yourself into the sun, but looking back, I’m grateful for a lot of the classes that I took, or was forced to take to graduate. And really, in the end, I only had TWO D-tier classes. If you had asked me that sophomore year, I would have probably put like 50% of the classes I had taken up to then into the D-tier.

One notable observation – that is made doubly clear by the color coding of classes in each major – is that I very clearly liked my CMS classes better than my Course 6 classes. I could have told you that regardless; it’s just nice to have a visual.

I do wish that I had gotten to take classes in fields that I wasn’t actually majoring in, just for the heck of learning some cool new material that I could never just pick up on my own. And not in the GIR sort of way – as you can see, the GIRs⁠02 note that there are a few missing - i got credit for 18.01 and 18.02 but im pretty sure i wouldn't have liked them particularly had i taken them here lol did not rank particularly highly on this list. I sort of wish that I had gone through the course catalog for every single major at MIT, rather than just my own, and picked out classes without too many prereqs that seemed cool. That’s what I would have done had I stayed for my final semester probably – but alas, the utility of taking a bunch of random classes is not actually higher than the utility of committing a lot of time to my research.

I’m sort of a boomer and this is the first tier list I’ve ever done, but if any MIT students want to make their own, theoretically they should be able to from here maybe? I don’t actually know. Anyways, they’re not that hard to make.