A eulogy for my UROP mice... in the form of me explaining my UROP.

But Mousie, thou are no thy-lane,
In proving foresight may be vain:
The best laid schemes o’ Mice an’ Men,
Gang aft agley,
An’ lea’e us nought but grief an’ pain,
For promis’d joy!

This entry is a eulogy for my nineteen behavior mice, as I am done testing them and they are to be euthanized sometime in the next few days. (Insert me pretending that I’m not actually sad here.) In their honor, today I’m going to talk about one of the projects I’ve been working on at my UROP for the past two years.

So first, some background. A scaffold protein, as the name suggests, is a protein whose major function is to serve as a structural base which recruits and connects other types of proteins. 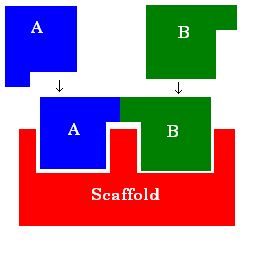 (I made that figure myself, in Paint. Pretend you couldn’t tell.)

Shank1 is such a scaffold protein. It was discovered and characterized by Morgan, the professor whose lab I work in. Lots of things are known about Shank1, but lots of things aren’t known, so Morgan told my postdoc, an MD/PhD named Albert, to make a knockout mouse which had no copies of Shank1.

What’s known about Shank1 is that it’s a scaffold protein found in the post-synaptic density (PSD) of neurons. It links several types of proteins, including other scaffold proteins and receptors, which suggests that it’s important for maintaining the strength of dendritic spines. (If this is all too confusing, the bottom line is that Shank1 seems to be involved somehow in changing neurons so they’ll remember stuff.)

So the knockout mice were born, and they looked normal and squeaked and ate food and everything. So far, so good. Albert decided that he should test them to see if their memory was any different from that of their normal brothers (who do have the Shank1 gene). There are several different tests of rodent memory, the most widely-used/reliable/easy of which is the Morris water maze. In a nutshell, you put the mouse into a kiddie pool of water and teach him that there’s a platform he can swim to and climb on. Mice can swim, but they don’t like to, so he learns pretty quickly that he should find the platform and get out of the pool and get a towel and a slice of pizza and flirt with the lifeguard. Then, being the mean and nasty biologist that you are, you switch the visible platform for a clear one (or remove it altogether) and see if the mouse still remembers where he should go.

Well, unfortunately for our knockouts, removing Shank1 makes you a little clumsy — for our mice, a consequence of this is that they are hopelessly bad swimmers. One almost drowned. I think Albert had to give him CPR.

So instead, we used the eight-arm radial maze task. First, you put the mouse on a diet — enough so that he’s not starving, but he’s definitely in the mood to look for a snack. Then you bait two specific arms in the maze with two pieces of sugary chow (I’ve tasted it. A little sweet, but definitely not people food). Over the course of many (many, many) trials, the mouse learns which arms are baited. Some of them get really good at it and they’ll never make an error by going into the wrong arm.

So generally, when you go around knocking out genes in the brain, you end up making really tragically dumb mice. This is sort of sensible — after all, if you went around taking out random parts from your car’s engine, it probably wouldn’t run as well. Well, my knockout mice aren’t like that. For some reason (and if you want the reasons, you can read the paper we’re writing about it), taking Shank1 out of the brain makes the knockouts a lot smarter than their wildtype brothers.

The result obviously isn’t what we expected (see the Robert Burns poem above about “the best laid schemes o’ Mice an’ Men”), but it’s such an exciting result! The paper based on this work is currently in submission to Cell, which is one of the top three journals in biology. And I get to be co-author! Undergraduate research rules.

Anyway, my behavior mice did a good job. And I, for one, am proud of them.

2 responses to “To a mouse (or nineteen)”