and how it's changed me

In my first blog post ever, I wrote about my first three weeks at MIT.

It’s been two years since then. I’m halfway done with undergrad. What is time?

I keep trying to type about things that are different, but there are so many things that come to mind that I’ve been pressing backspace on this line for the past twenty minutes, trying to convey this feeling of being overwhelmed by not only how much I’ve changed, but also how much everything around me has.

How do I begin?

I found myself returning to East Campus time and time again, and since I was temped here in the first place, I decided to stay.

I lived in East Campus for a year, on Fifth West, which is a wonderful hall filled with cats and friends and midnight tea and cheese and cookies. I lived next door to Allan K. which was a complete coincidence. Other things that were coincidences: we were both bloggers, we had the same romanized last name, we were both in the same acapella group. Other than that we’re pretty different people. But I admit that after countless nights in their room – the Toons after-concert hangouts, the psets spent in silence, or sitting outside the window on a clear cool night, talking about life beneath the stars – a little piece of that has rubbed off on me.

I made a friend at Next House, and spent time there until I made more friends, enough to convince me to move, enough to start my second year here on 2E. I really like it here – mainly because of the people who live here, and the silly things that we do – but it’s different from EC. In some ways, I felt more like myself on Fifth West. Things were less stressful there than here. I’m not sure if that’s because I’ve just become more jaded or if Fifth West felt more intimate as a community.

For what it’s worth, my significant other Joanna lived in Fifth West before she graduated, so maybe I’m biased. :)

Either way, I like spending time at both places. I’m happy that I have two different places where I fit in.

I certainly feel the impostor syndrome slightly creeping in (…) I hope this feeling goes away eventually.

I got over it eventually – it just took a while.

Being Course 6 doesn’t help. At times, it feels like an artificial race to get the most experience you can as early as possible. It’s stigmatized for being a ‘sellout’ major that tons of people do, and there’s this indirect but constant pressure for you to get some form of internship or job experience before junior year. It also doesn’t help that I came into the major without any real computer science background, so I always have this feeling that I’m behind. One of the reasons I’m doing an x-terms (a semester where you do part-time school, part-time internship/work) this semester in the first place is because I felt like I sorely needed the experience.

It took a long time for me to realize that everything that I mentioned in the above paragraph didn’t actually matter. It didn’t matter as a personal metric what everyone else’s pace was, or how many internships they were applying to, or how many classes they were taking, or how amazing they were (because really, they’re amazing) – what was important was that I was going at my own pace, and that I was satisfied with it. And when I realized that I was, I was happy. I had broken free from impostor syndrome at last.

Now, I’m happy that I chose to do x-terms not because I landed that fabled sophomore summer internship, but because I gained valuable experience for myself and felt myself grow as a software engineer because of it. I’m glad I get to work on my team, because we get along really well and they like having me around. When my manager told me that he’d love to see me come back next summer for the same team, I did my best to not show my tears, the complete, unrestricted stream of happiness that seems so hard to come by, thankful for this pure declaration of “yes – you’ve come a long way.”

There were video gamers and literary buffs, classical music lovers and EDM artists, introverts and extroverts, and everyone in between.

Let me tell you about all the reasons I love MIT.

Let me tell you about my friends, without naming names:

And each of these people are willing to take time out of their day to help me with anything I need, either because they’re trained to do it and/or volunteered to do it on their own – a particularly difficult pset, a band-aid with neosporin, emotional support when I’m stressed out and need to vent, giving advice for picking certain PC parts over another.

All of these people coexist in the same place and in the same sphere that I inhabit at MIT, and it’s inspiring. It gives me hope in a state of the world whose headlines seem to try to bring me down rather than pick me up.

There’s lots not to like. I think my emotional state was at an all-time low in the wake of Senior House and its closure. Classes here are extremely difficult, and already in week 3 I’m feeling hosed. It feels like even if I spend all my free time doing psets or work for class (which isn’t healthy), I can’t get everything done on time. And MIT, as amazing as it is, is a huge bubble that’s easy to lock yourself into – it’s hard to find the time to give yourself a chance to breathe once in a while, to be able to stop working and get up and take the T to Boston or Harvard or Porter and explore the sights – check out Newbury Street, go shopping in the Prudential, eat all the ramen the Red Line has to offer, to take a walk in the Commons.

It’s hard to take advantage of MIT’s special location on the edge of Cambridge in the heat of the semester. Days flow into each other and the weeks go by without really thinking about it, since you’ve been so focused on getting the work done, studying for that test, meeting those deadlines.

I don’t want to leave.

But at the same time… 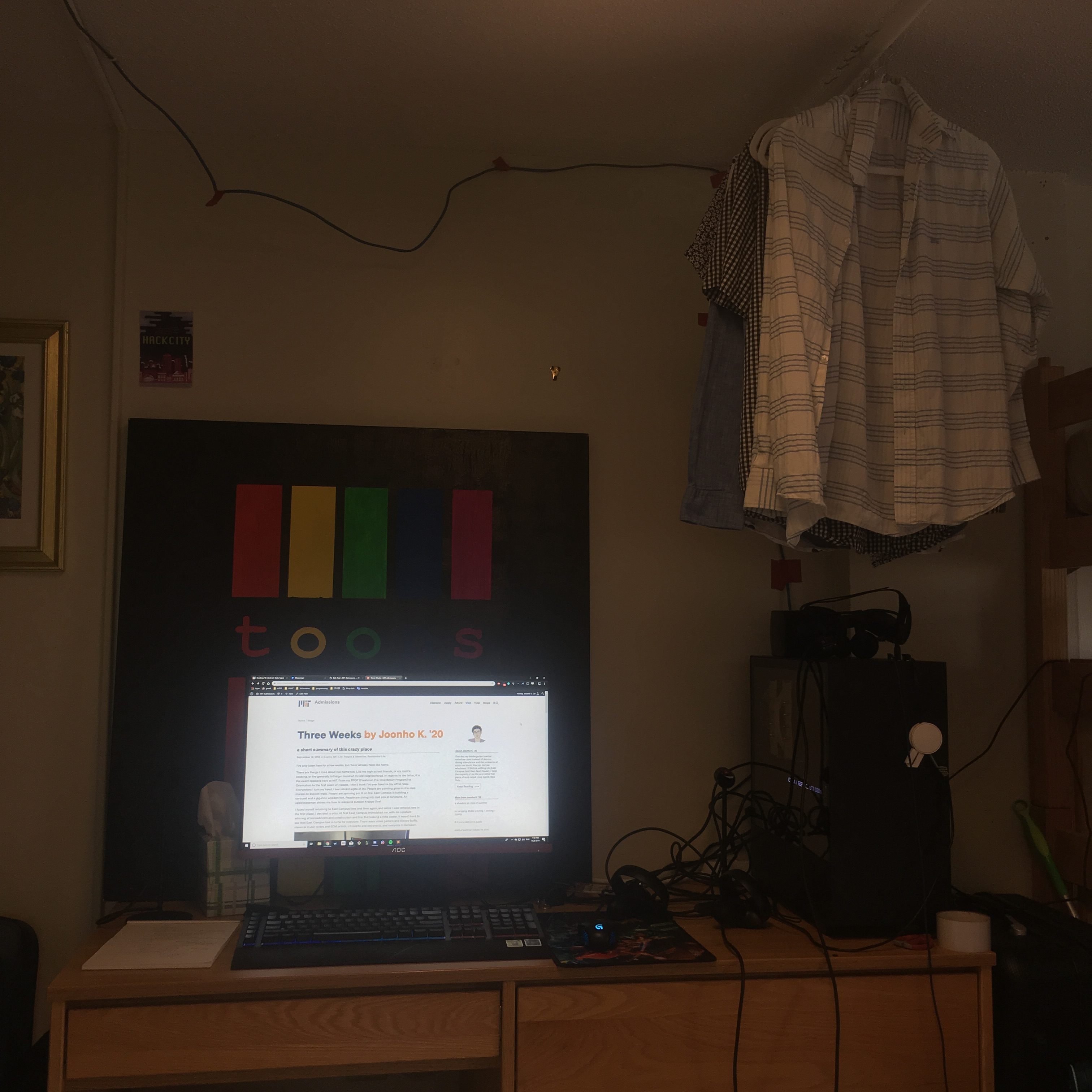