At 9:30 PM I grabbed my skates headed over to the Fenway movie theater. It was time for BATMAN! I was supposed to get there at 10 but was about five minutes early so I watched as guys dressed in batman pajamas stormed the front entrance of the theater and chased after the news cameras. It was going to be a good night.

At ten, Javi ’08, Jordan ’11, Dan ’11, and Harrison ’11 all showed up and we picked up our pre-ordered Fandango tickets. We headed to theater 12, showed our ticket stubs, and walked in. Not only were we two hours early but the theater was already a quarter full. This was going to be awesome!

We managed to snag the best seats in the house, that front row above the neck-straining section, the one with the bar you can put your feet up on. We grabbed our five seats and settled in for our 2 hour wait.

Seriously. Batman: Dark Knight, epic. Absolutely epic. Go see it as soon as humanly possible because you will thoroughly enjoy every second. From the quick humor to the crazy explosions to the masterful acting, Dark Knight will be one of those movies I watch many many times. I’m actually listening to the soundtrack as I type, it’s just that good.

A skate home across the bridge threw me for a loop. I looked at the green building and noticed that every single light was off. There’s this unwritten understanding at MIT that if every light in the green building (both sides) is turned off, the world will end. There is always somebody in there doing something. . . but not tonight. I stared at this for a while. Why were there no lights on? About thirty seconds later I noticed that the top half of the building was lit. I looked at the top half of the building, lit up, and realized that there was a spotlight on it.

Why is there a spotlight on the green building? Are they lighting all river-facing buildings now?

I checked the great dome and it wasn’t missing any spotlights and no other buildings were lit up.

I stared at this spotlight for a while, wondering if it was a desperate attempt to keep the world from ending. That’s when I saw it. Everything finally snapped into place. How could I have been so stupid!? This wasn’t a spotlight! This. . . was a Bat Signal 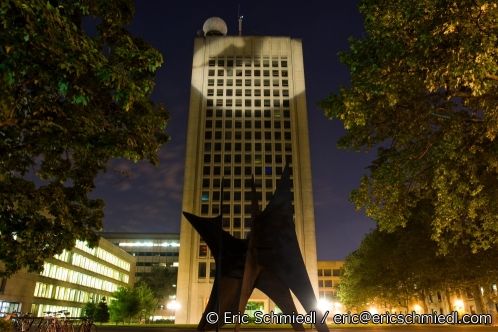 A quick text message to Eric Schmiedl, a quick “I’ll be right there!” and about 2 hours later we had pictures! I didn’t have my camera so I hope this picture will suffice.

A hack to finish off the evening, a perfect way to cap off a fantastic movie. Hackers, I don’t know who you are, but kudos on this one. Seriously, well-played. My only regret is that you didn’t get to actually watch the movie, but I respect you for that. Treat yourselves to it tomorrow, it won’t disappoint.

(Note, this was posted exactly twelve hours after it was written due to availability of pictures and having to go to work. Apologies!)