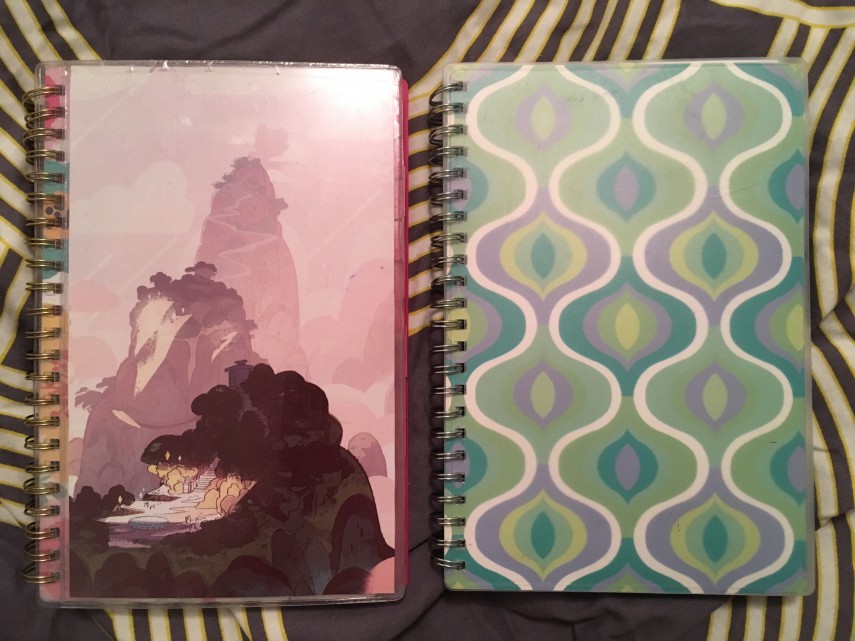 Allan: These are the little notebooks that literally organize our entire lives (at least during the semester). Lots of people use Google Calendar or other similar online planning apps/websites, but we just like using physical agendas more. For one, it’s fun to buy a new one each year with a cute new cover! This year, mine (the one on the right), had a plastic pocket to put in any design you want. So, I printed out one of my favorite backgrounds from Steven Universe! Another reason I like physical agendas is because I like to very excessively cross out tasks as soon as they’re done. Friends who’ve seen my agenda have been amused by just how *much* I cross out items, especially when compared to the way Danny crosses out items. I guess in this sense, our agendas are more like cousins or even distant relatives as opposed to twins lol 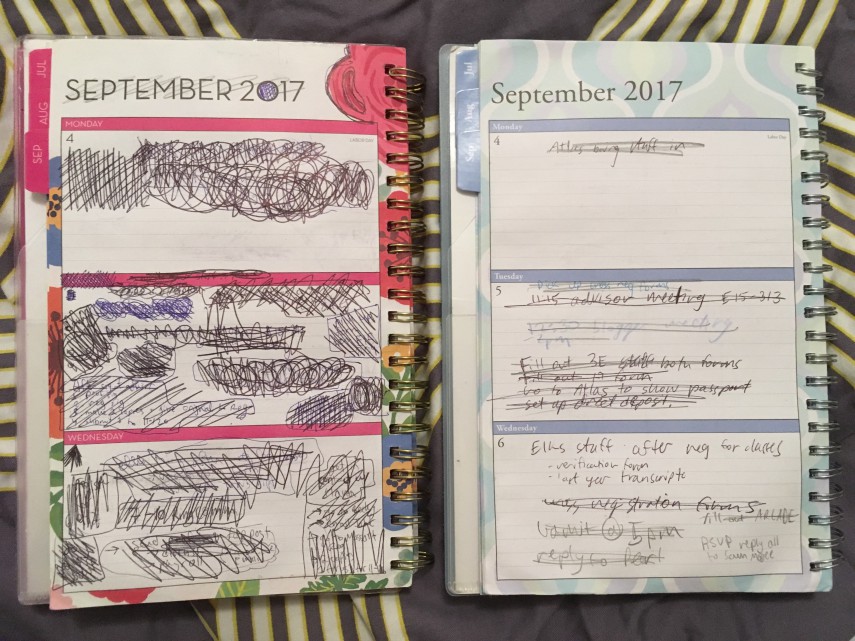 Danny: As Allan said, we’ve both always gotten new agendas at the beginning of each school year. But while Allan has consistently filled up every slot of every week of every agenda he’s ever had, I always stop using mine after the first two-weeks of the year or so. Every year, I try to make more use of my agenda, but I usually fail and my agendas always end up 90% empty. I think this is mainly because assignments are pretty repetitive and after I get into the swing of the semester, I find myself needing to look at my agenda less and less. And if I ever need a reminder, I just email it to myself and leave it unread until I finish the task. This semester, however, was probably *the* hardest semester I’ve had and that is very much reflected by my agenda, or I guess by the fact that I actually used my agenda for pretty much the entirety of the semester. And now that, for the first time ever, my agenda crossing out habits and patterns are evident enough, we decided to make this comparison post. 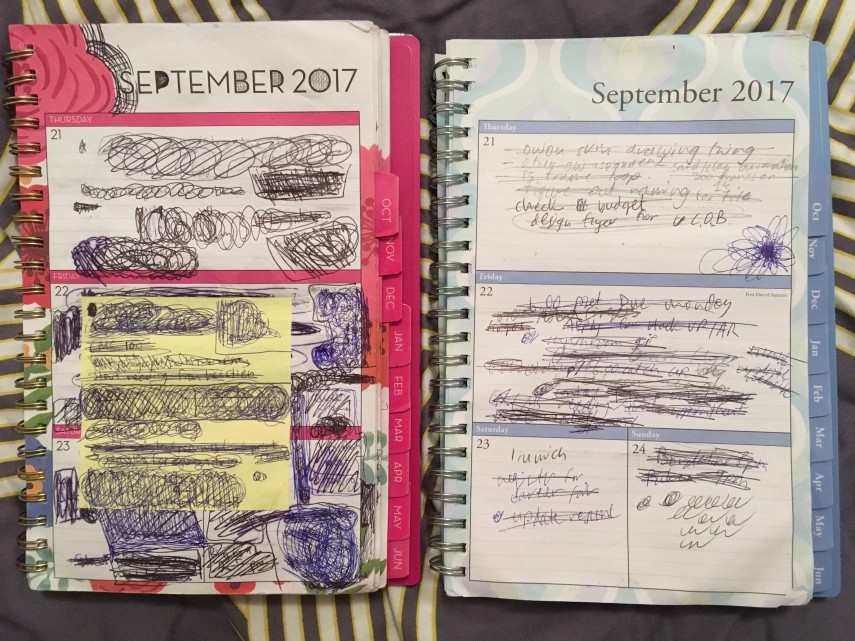 Allan: This week shows stress in the form of a sticky note! I had to put it over an already COMPLETLEY scratched out section to make more room,
Danny: while my agenda was a canvas for a beautifully illustrated stress sketch in the bottom right corner of Thursday. 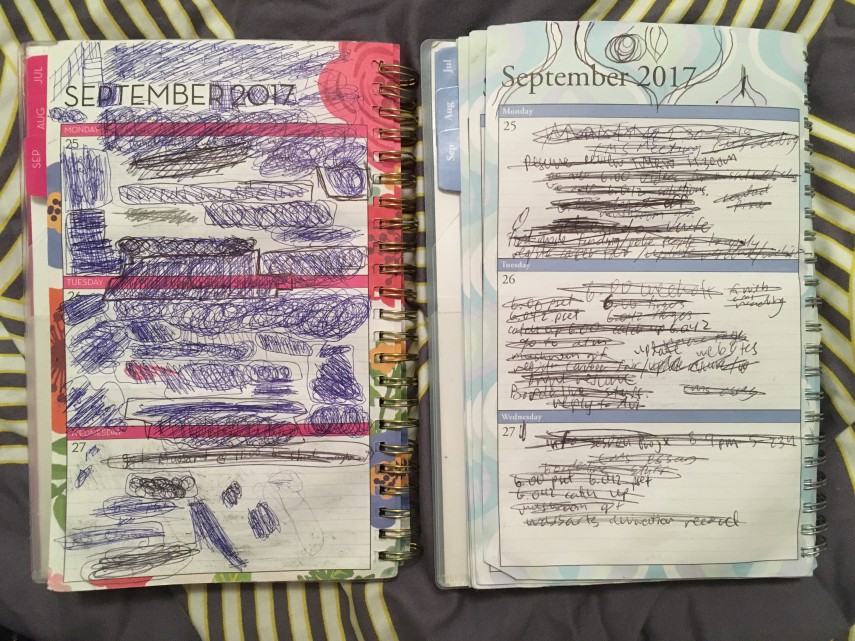 Allan: In this week of September, I had to color outside the lines. Truly, my most shameful moment. My five-year-old self would be pleased though. 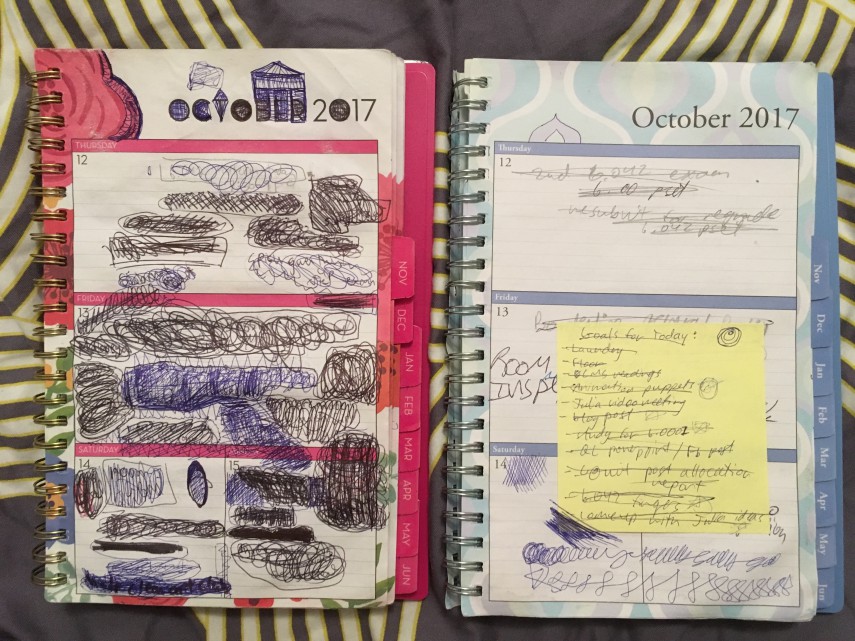 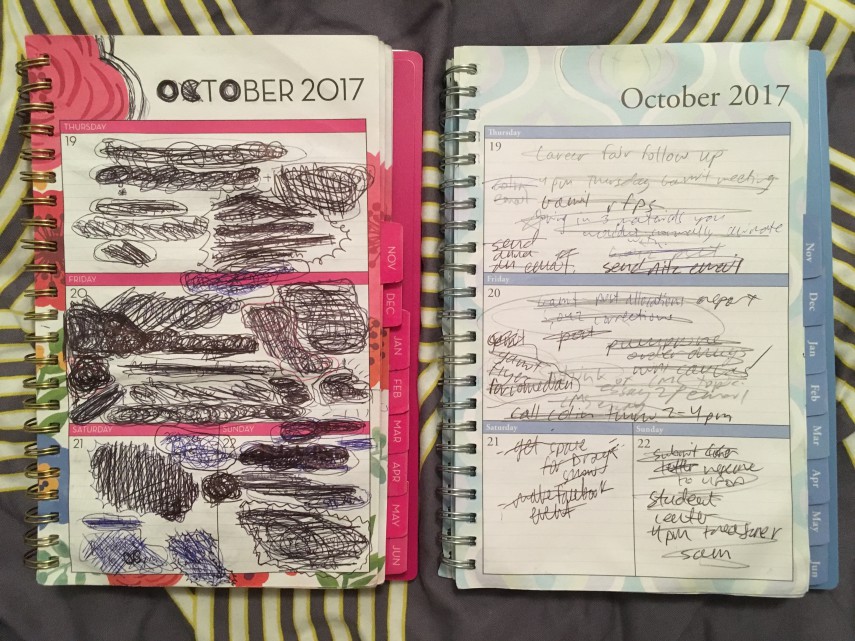 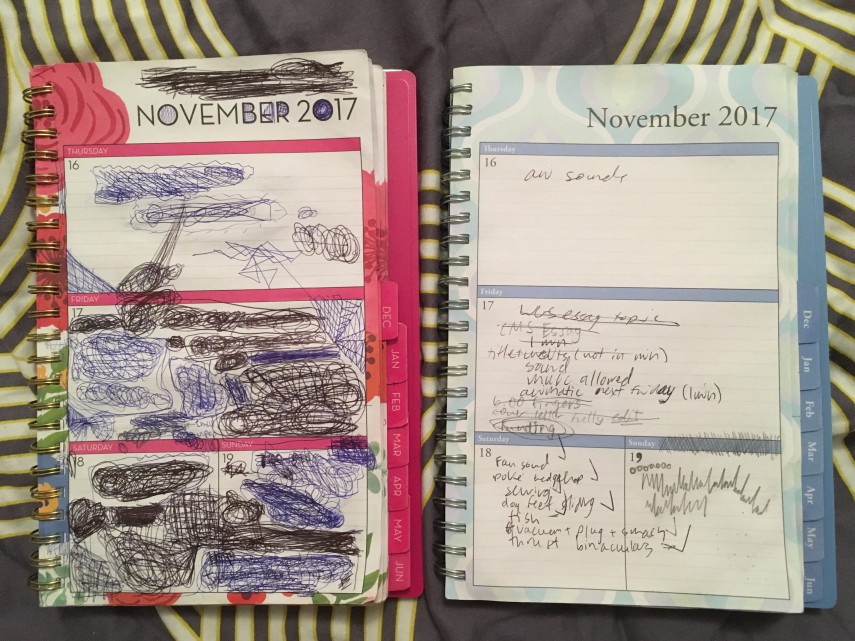 Allan: These two pictures are a before dropping 6.042 and after dropping 6.042 comparison. So it may seem like nothing much changed in either of our agendas, but there was definitely a decrease in our hosage. Sometimes, density of cross outs doesn’t necessarily correlate with how busy a week actually is. Since some assignments just aren’t as time consuming, one week could have a lot of things that each take a lot of time, and another week might have a lot of things that each take less amounts of time. 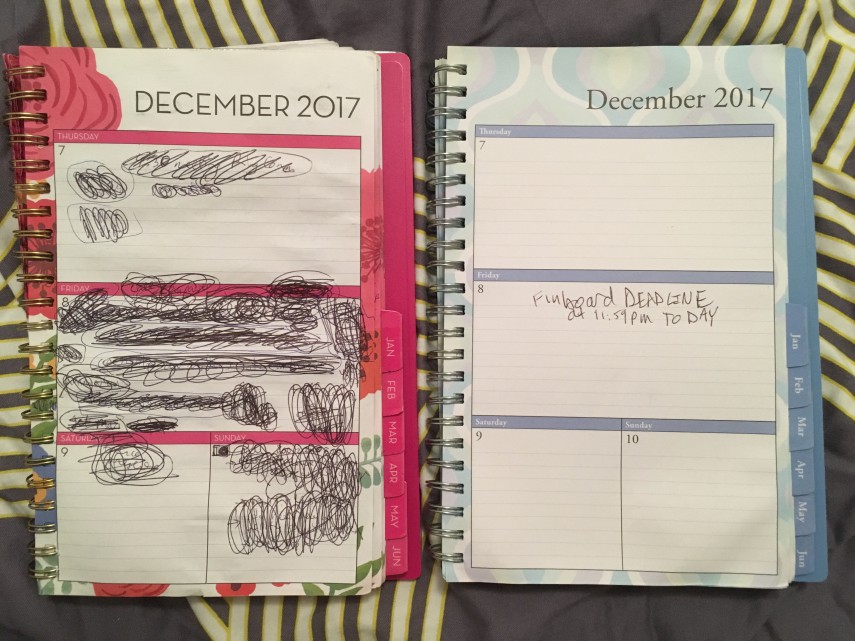 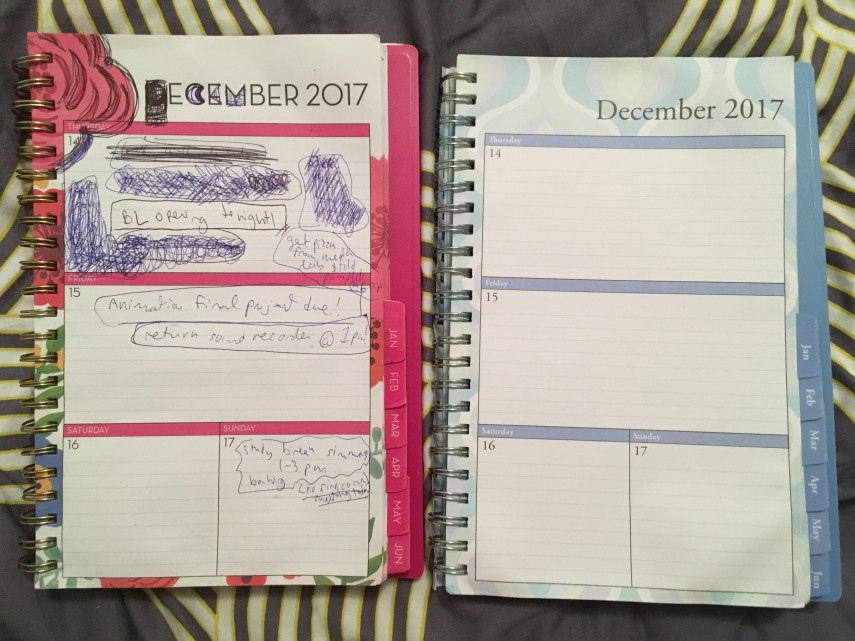 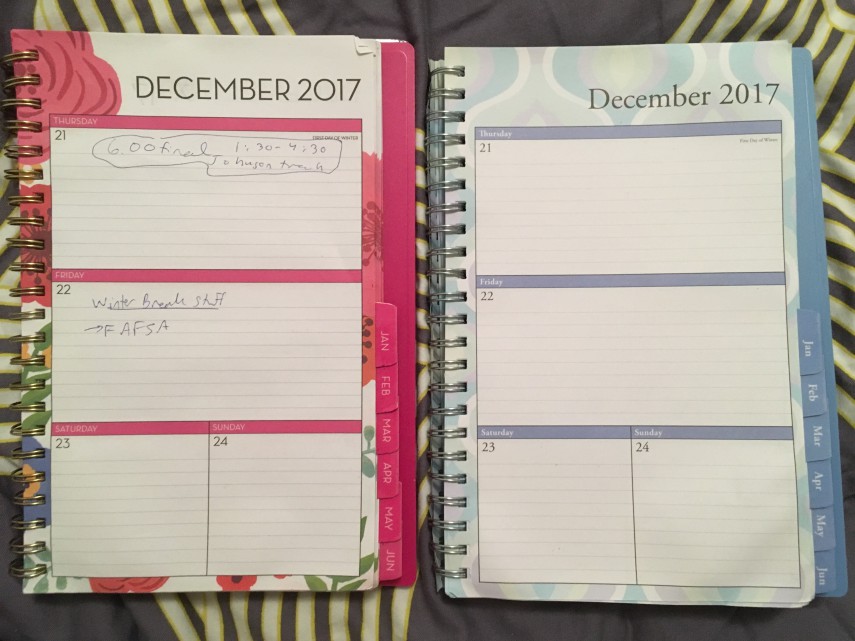 Danny: A similar phenomenon of agendas being un-indicative of hosage can be seen in the succession of these three pictures. By the end of the semester we really only had a few assignments between all of our classes, but those were all long essays or projects that would take up a significant amount of time. So while it looks like our agendas were getting emptier/less filled with time, we were, in fact, getting progressively more and more hosed/drowned/swallowed/etc. Another reason for this disconnect, besides decrease in number of tasks, was that I was so busy that I forgot to use my agenda (see third picture).

Allan: I didn’t forget to use my agenda, but I did forget to cross things off it. Crossing items off my agenda honestly feeds my soul though, so my forgetting to do so, in and of itself, is very indicative of how occupied I actually was.

Anyways, for the first weeks of December, we were spending multiple hours a day finishing our final projects for our animation class. And the second week of December, we stayed up until 4 am everyday to work on it. Then, the day before our final was due, we both still had quite a bit to do, but Borderline (a project that let’s students create murals enhanced by augmented reality in the tunnels of MIT) had it’s semester showcase. It was a night of friends, art, and food (we ordered so much food… a scary amount of food). 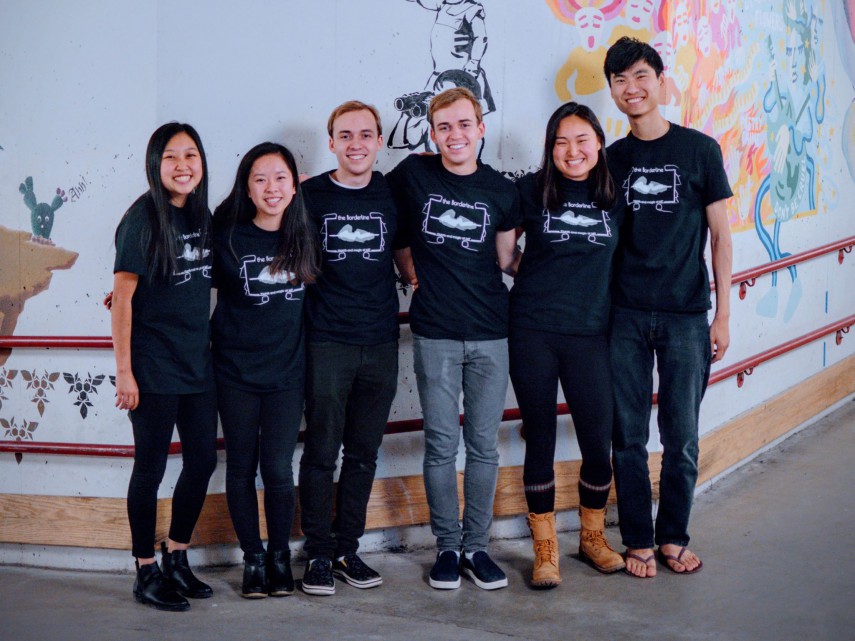 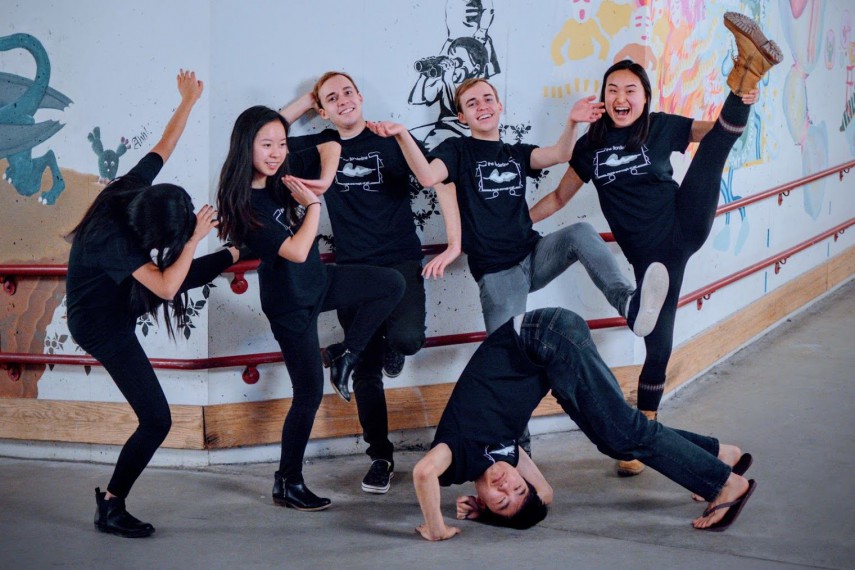 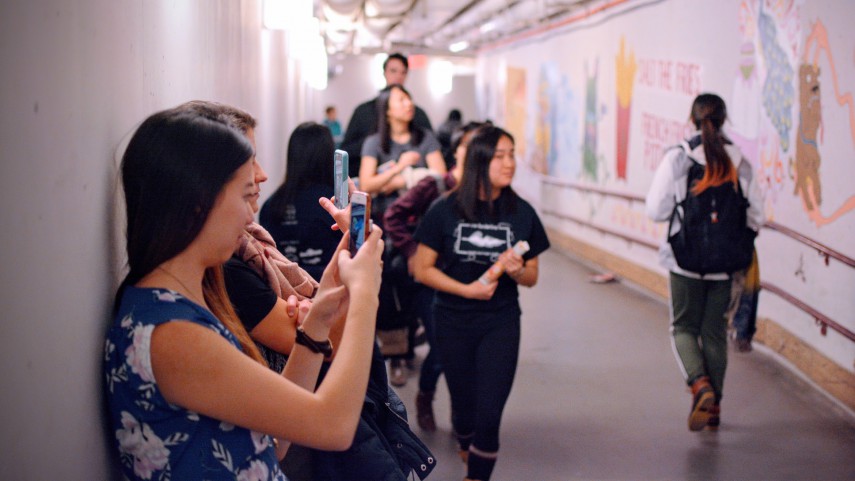 After this, our wing in Next House, 3E aka Danger Third Rail, had its annual gift exchange/Secret Santa spin-off, Secret Senpai. 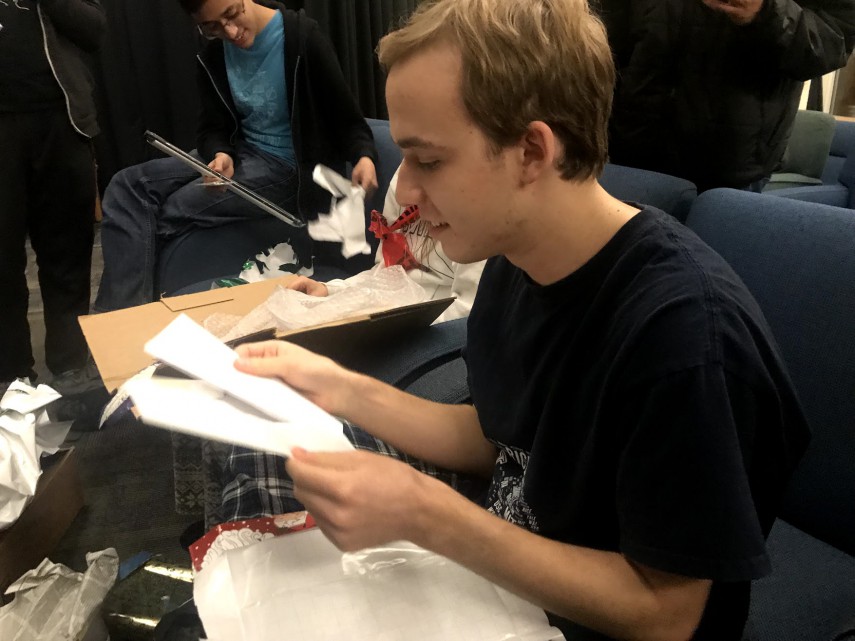 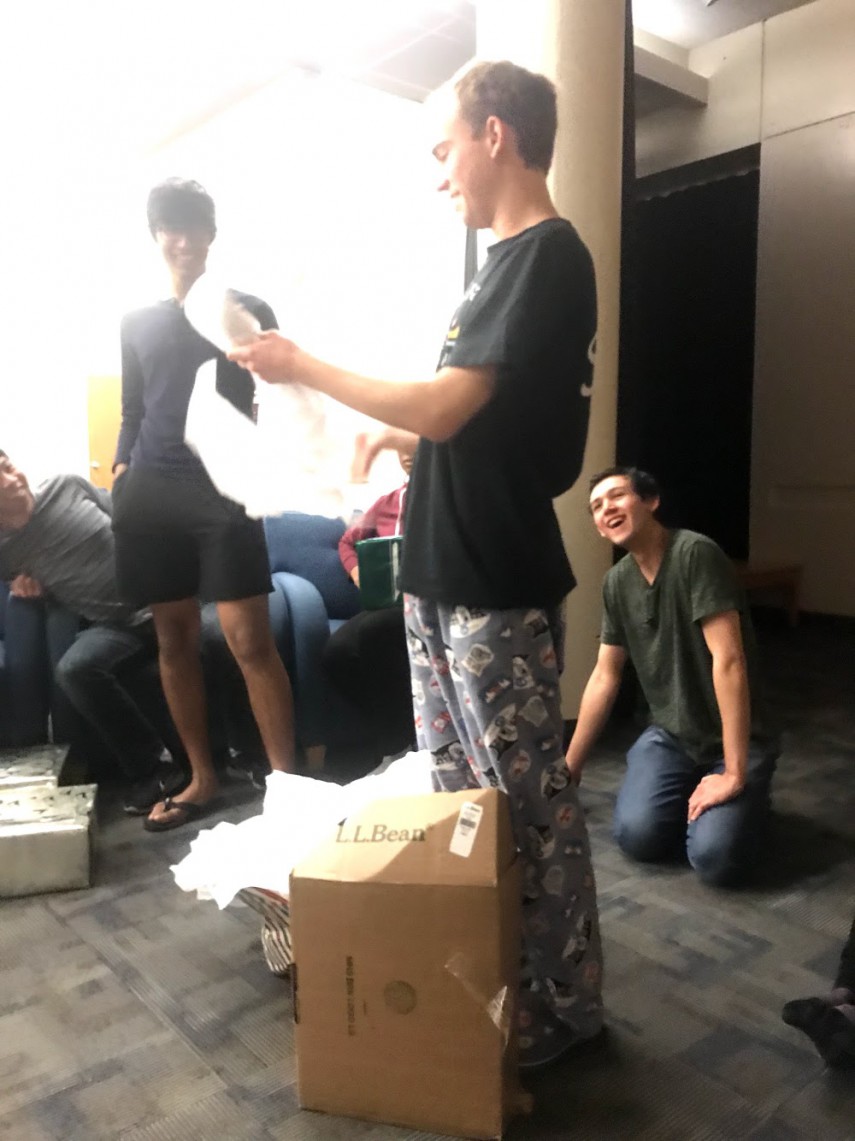 Danny: I got a freakin awesome studio ghibli tote bag! It’s not pictured because it was shipped after the exchange, but I have since received it, and it really adds to my weeb-suburban-mom aesthetic.

Allan: I got a pair of awesome Steven Universe socks! It adds to my steven-universe-is-my-life aesthetic. So because of Borderline and Secret Senpai, we ended up having to stay up until 7am that day (or I guess, the next day?) to finish our animation projects. It was truly painful worth it because both events were really fun!

Collective voice for rest of post: Even though the timing wasn’t ideal, both events were really awesome! After we caught up on sleep from that, we had to begin reviewing relearning learning 6.00 (intro to programming and data science) in preparation for our final. We actually only left Next House 2 times in a period of 6 days. Our existence was sad, sedentary, and solely comprised of studying, besides those 2 times. The first thing that got us out of Next was going to see an acapella concert (the Log’s fall semester show) with a friend! Their performance, themed around The Bachelorette, was amazing and hilarious! As we were leaving Kresge auditorium, amidst the crowd of people, we somehow totally coincidentally bumped into every exec member/friend (minus the benevolent overlord president) from a club we’re part of! Here’s a picture! We then spontaneously went ice skating with the friend in the hat, and her entry from Macgregor. 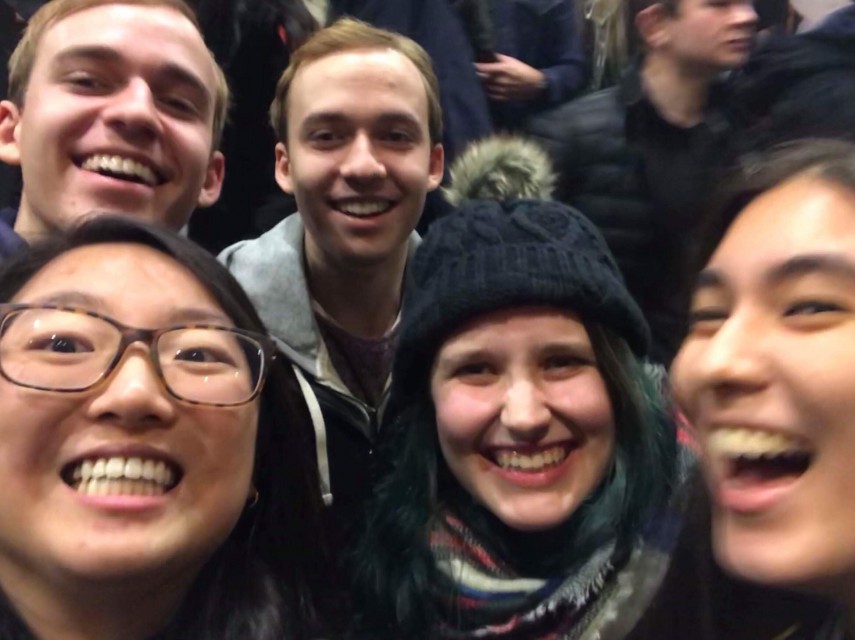 The second of the two times we went outside was for a baking study break with that very club! Even though barely anyone outside the exec of the club showed up, it was really fun to just bake scones and talk and listen to holiday music! 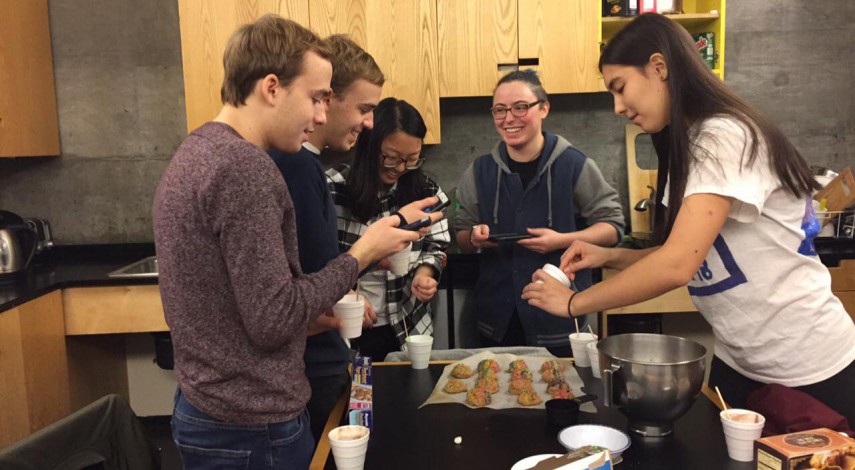 Okay so, finals are done now. Another semester is checked off and crossed out (or in Allan’s case, overly scribbled out). It was pretty rough academically, but our agendas made it organized, and the people in our lives made it very very sweet.