All the snow has melted since I took these pictures.

This is probably any grad student’s answer to that question, no matter the time of year.

This winter I have started working in the Sabeti lab at the Broad, my thesis lab. This is the lab I most wanted to work in and least expected to take me, the lab whose papers I read for class and whose writing and clean, minimalist figures I idolized, the lab whose PI I awkwardly Googled thinking someday I’d like to be her (only still me, but also her, but also definitely still me, but just kind of maybe her). The fact that I am here is mindblowing.

Over IAP I am working on a short-term project and my thesis proposal. After that there are three planned projects of unknown length, at least one of which will comprise my thesis and the next year and a half of my life. With these projects I’ve shifted my focus slightly, from human to viral evolution. All of my work is related to this recent paper, which you may or may not be able to read without being on a college wifi network.

Amazingly, the lab gave me a third of a beautiful office (which so far is always empty except for me). I’m hoping to buy prints of some of my favorite boat and buffalo paintings the next time we go to the MFA. There’s lots of space and not entirely sure what to do with it (except sit there and work, which I guess is the point). 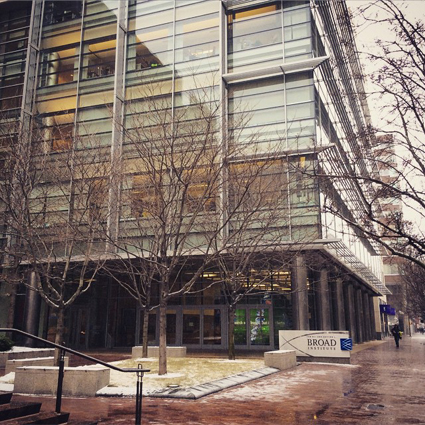 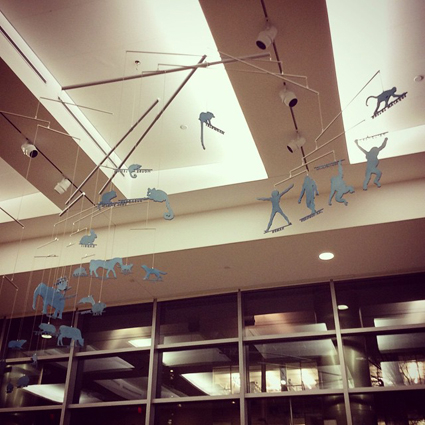 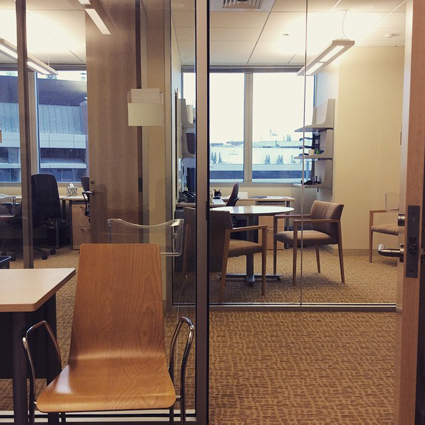 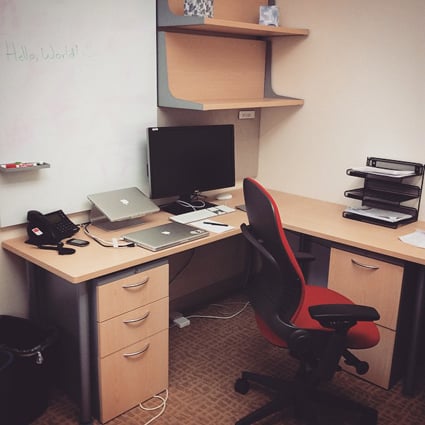 At the top left is a view of the Broad from outside. The purple awning in the distance is Sebastian’s, a crêpe and sandwich bistro. The Broad has its own entrance to Sebastian’s, a daily temptation that I am proud to say I have only twice succumbed to. At the top right is a cool mobile hanging from the ceiling of the lobby on the first floor. The lobby is open to the public during the day. It’s like a small, spacious genetics and evolution museum with couches. If you’re around you should stop by.

The bottom photos are the view from my desk and my third of the office (one third belongs to my 6.047 TA and the final third is unoccupied). I don’t have a window, but the offices across from mine do and that is a lot like having a window myself. You can’t see it in the photo, but there was a beautiful thick snowfall outside that evening.

One of the laptops on my desk is my personal computer, which now lives at home. The other is my work computer, which will live at work. I’m hoping to be able to do my on-campus TA work and email checking entirely from my iPad and limit my laptop carrying, which may or may not be possible. I also have a landline. I have absolutely no idea what to do with a landline. I also have no idea what to do with the whiteboard or the shelves or three of the five drawers (my figure skates live in the bottom right drawer and my headphones and pens live in the top left drawer).

I have a lot of trouble sitting still at work. I like to get up and get tea and enter and exit rooms and look through windows and walk past people’s offices. My favorite place to sit when I’m reading papers or doing work that doesn’t require a computer is an alcove right next to the kitchen with a view of some of the Broad and Whitehead wet labs. The labs are in neat rows and columns, in each window a researcher and their small expanse of new knowledge of humans and the worlds around and inside us. It makes me very happy to sit there and drink tea and read and watch the windows. I feel a pleasant oneness with the research community around me, even though I haven’t met most of its members and I don’t know what most of them are working on. I’m very happy to have my own piece of a square in a similar grid. 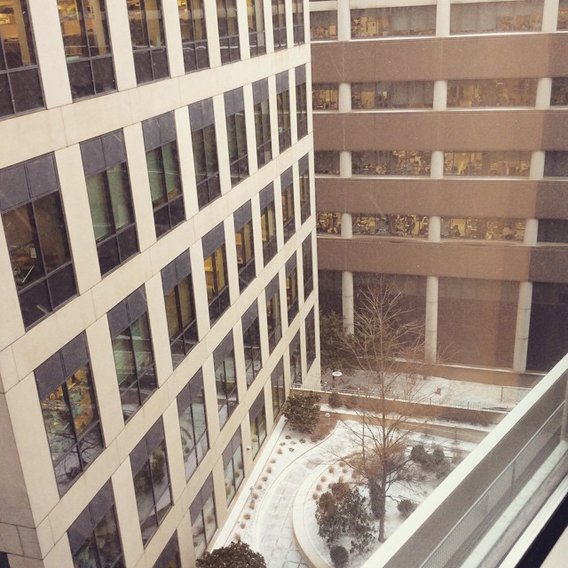 On the top right is my favorite cozy space by the window and on the left is the view from that window. The Broad is the building on the left and the Whitehead is the darker building on the right. (Just out of frame on the left is somebody’s post-it note office window art.) On the bottom left is the floor’s Keurig. In our first interaction it ate a cup and did not give it back. Now I feel like we have an understanding. It seems to be busy computing something else when we’re not bothering it and I wonder what it’s been up to and whom it is working for. Sometimes I catch myself apologizing to it and saying thank you when it’s made my coffee. It makes a very pleasant whirring sound. I hope it doesn’t hurt me someday. I quite like it.

In addition to the visible things that 6.005 TAs do (go to class, hold office hours, mentor project groups, and give feedback on and then grade student code), we also do a lot of work below the surface: specifically, we help build and maintain tools and we playtest (as in, do) the problem sets and projects before they get to the students. That second chunk is what we’re trying to get out of the way before the start of the semester.

So far I ported class names and student deadlines into Stellar, MIT’s course management system, learned Google Apps Script, which is a lot like JavaScript, and wrote a friendly 389-line bot that reads from a staff calendar and emails staff members when they have things to do. Up ahead is playtesting more p-sets and the project. I can’t see them so I’m not worrying about them (healthy attitude, right?).

We meet up on the seventh floor of Stata, which is conveniently just across the street from the Broad. 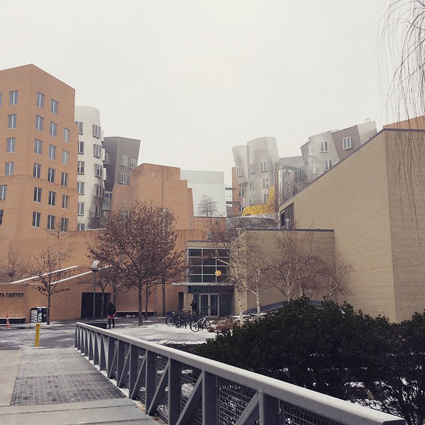 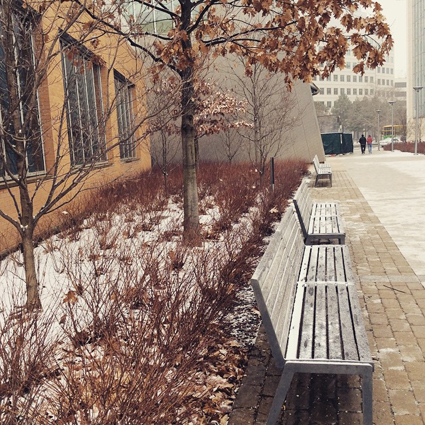 On the left is a view of Stata from building 56, near the end of the Infinite. On the right are snow-covered benches on the other side of Stata, at the edge of the courtyard. The two people walking in the distance are walking toward the intersection of Vassar and Main, the most terrifying intersection I have ever experienced. The Whitehead Institute and the Broad are to the right, behind the Koch Institute and across the street.

Finally, I am taking advantage of this relatively relaxing time to honor my heritage by learning Russia’s national pastime of hunting polar bears on figure skates (not actually (we don’t do that (if we do no one told me))).

I never graduated. Instead, I’ll be getting both my degrees (bachelor’s and master’s) when I finish my master’s in 2016 (knock on wood). (In other words, Lydia K. ‘14, MEng ‘16 is a lie: I’m actually Lydia K. ‘16, MEng ‘16.) The downside of this situation is that if I screw up, I get nothing. Some perks are that I get to mix up my graduate and undergraduate classes, starting the former early and finishing the latter late, I get to live in my undergraduate dorm for two extra semesters, and I get to register for phys ed classes with the undergraduates (grad students register later, after the awesome classes are taken). This IAP I am finishing up my phys ed requirement with two classes.

On Mondays and Wednesdays I go to rifle, where so far we have learned the history and anatomy of rifles and shot our first rounds from a seated position (this coming week we move on to standing). The focus of the class is on leaving stress outside the shooting range, breathing, and listening to our bodies and minds.

At around the same time on Tuesdays and Thursdays I go to figure skating. Figure skating with my mom was a very big part of my childhood. When we lived in Chicago I took classes a few days a week in the winters at an outdoor rink no one seemed to know about, the Daley Bicentennial Plaza (which was taken down a few years ago; now it seems to exist again under a different name). This is my second time taking the phys ed class. It feels good to be back on the ice. I always feel buoyant and overflowing with happy energy after skating, more me: I think figure skating is one of the threads that connect me to my favorite parts of my past selves and the very different stages of my life.

Rifle is the class I registered for when the registration system opened at 8 am. Figure skating I showed up to on the first day and got a spot. Conveniently, my two phys ed classes now are at about the same time as my two academic classes will be during the semester. Hopefully this is good practice organizing my more flexible responsibilities around set commitments. 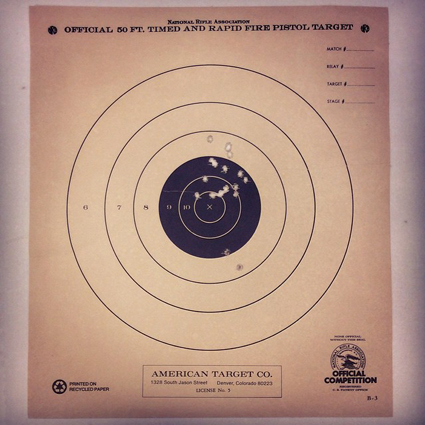 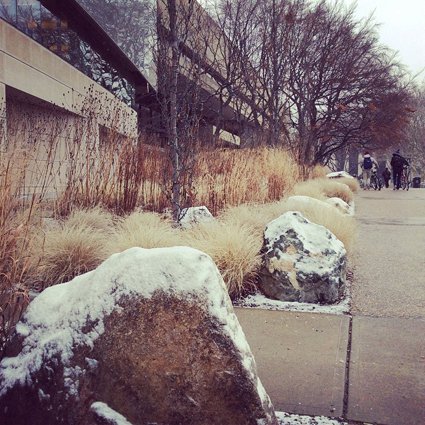 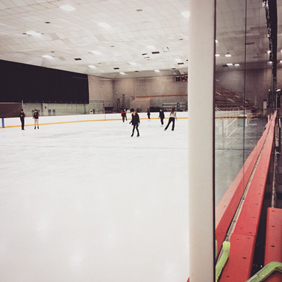 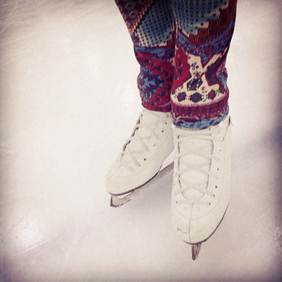 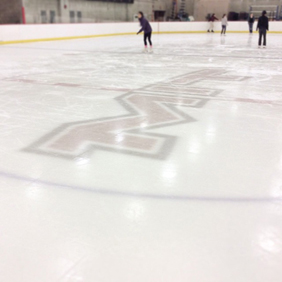 At top left is my target from our second day of shooting. The bottom row is MIT’s beautiful ice rink, my figure skates, which I brought over from Pennsylvania, and the leggings my mom gave me for Christmas. At top right are some snow-covered rocks outside the Z Center, our gym. Figure skating is on the first floor. Rifle is at the shooting range in duPont, behind and attached to the Z Center, closer to Random Hall. The Student Center is on the left behind the trees. Lobby 7, the small dome, 77 Mass Ave, is ahead.

Figure skating especially is wonderful: after the 15-ish-minute trek to the Z Center from lab, I walk out of the biting cold into the gentler cold of the rink. After exercise I step out, back into the snow, and the same biting cold feels more pleasant. Winter is my favorite season, next to autumn. Campus is beautiful. 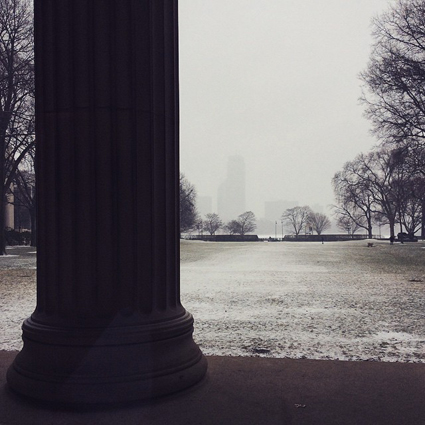 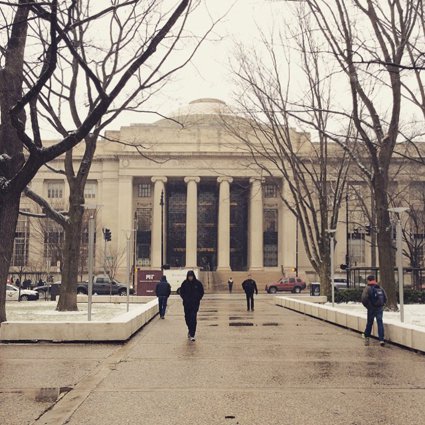 On the right is the small dome (Lobby 7) viewed from across Mass Ave, right next to the Student Center. Lobby 7 is 77 Mass Ave, the physical address you send your application materials to if you send your application materials by mail. On the left is the view from inside the big dome, the other side of the iconic view you might think of when you think of MIT. We are looking across Killian Court, where graduation and freshman convocation are held. Boston is in the distance, across the Charles River. Behind us is Lobby 10 and the Infinite Corridor.