What I Did on Registration Day by Yan Z. '12

10:51 PM, on the farewell eve of Infinite Activities Period: School resumes in twelve hours, a carton of eggs waiting to crack and hatch their embryonic guts over the creamy, supple blankness of winter vacation. This morning, I peddled a small piece of my soul in exchange for my academic advisor’s signature on a pastel triumvirate of white-pink-yellow forms identifying me as a certified member of MIT’s Academic Indecision Society. I walked into her office with eight classes slapped onto my registration form like those profuse GOOD JOB! stickers on a first-grader’s unbrilliant grammar homework, quarterheartedly (like halfheartedly, but squared) chatted about classes with my advisor for 10 minutes, and walked out with seven classes and her pen (oops- if any of her other advisees are reading this, I sincerely apologize if she wasn’t able to sign your forms after I skipped out), with which I almost completed an entire Statistical Mechanics problem set earlier tonight while waiting for iTunes to load*.

*Not that this is supposedly impressive. Probably half the problems were just to take logs (the math kind, not the kind that President Lincoln lived in, which are much harder to take). Speaking of which, you should check out my friend Phil’s blog, blogarithm, not necessarily because of the content but because I thought of the title.

After my advising meeting, I loitered for a few hours, had a meeting with the Department Head of Physics not worth blogging about (yet), caught an elevator* to the 6th floor of the Kavli Institute, and nearly fell asleep four times on a sun-dappled sofa while waiting for my UROP supervisor to finish his phone call. In the meantime (between sleep cycles), I started to debate the redundancy of phrases such as “stick of chapstick,” which has bothered me so deeply in the past that I’ve refused to use chapstick of any flavor, texture, or bee-produced ingredient in fear of getting belittled by my peers for repetitive word choice. Unbeknownst to me, there was an unopened stick of chap in my coat pocket, a complimentary gift from Cedar’s Hummus Company that annoyingly happened to be peach-flavored instead of hummus-flavored. I later gave it to a British exchange student by the unlikely name of Nimrod, who remarked, “Wow! It’s chapstick flavored like hummus flavored like peaches!”

*The elevators in the indubitably tall Building 37 are visible from Earth only slightly more often than Halley’s Comet.

Tomorrow, I will (1) wake up, (2) attempt to get a career at the uncareerlike hour of 9 AM, and (3) sit through six hours of classes, in body if not in spirit.

Lastly, I’d be remiss not to publicly observe that my bed is a right triangle. I sleep on the hypotenuse: conveniently, (Wall length)^2 + (Wall length)^2 = (My height)^2. 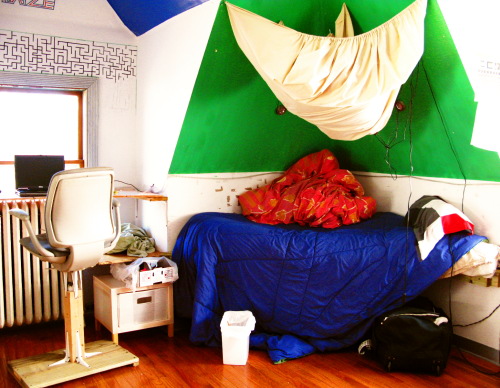 37 responses to “What I Did on Registration Day”