That which we call a workspace by any other name would look as depressing...

I’m typing this entry as I’m over 10,000 feet in the air, flying over what I think is either Indiana or Illinois. By the time you read this, I’ll be in Columbia, MO, hanging out with my little brother and his dog. Winter break as officially started for me, so life is pretty good right now. But in the last month, since coming back to MIT from Thanksgiving break, I…

1. Had two exams
2. Had two final projects
3. Had two final exams, both of which were yesterday. It’s funny how slowly three hours passes by while you’re on a plane, yet so fast when you’re taking a final exam and all you want is a few more precious minutes to figure out that damn structure elucidation problem…

Anyway. The point is I’ve done a lot of work – good work, the kind where I do it and then I’m like, “Whoa! I know stuff!” – in the past month, but as a result, my desk at home has suffered. It was kind of a bath of crap (my roommate, Sneha ’13, can attest to this. She’s had to live with the mess for the past month). But last night, as I packed my things, I managed to clear off what is supposed to be my workspace (although I rarely use it as one – I avoid doing work in my room as much as possible). They say a person’s desk reveals a lot about their minds. Well, let’s have a tour of the clean, organized and happy version of mind. Away we go! 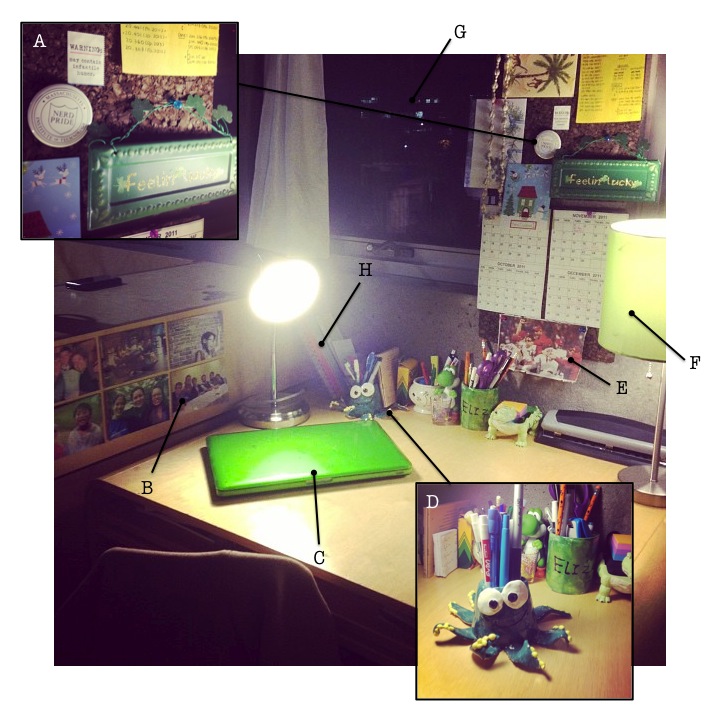 A. There is a running joke in my family (and among friends) that I’m actually Irish. This is because I’m obsessed with Irish culture, music, people, history, etc. And I was also born on St. Patrick’s Day. This was a sign that my mom sent me last year. The Nerd Pride pin is just… well… I really don’t feel like I need to justify that one. It is what it is. You’ll also spot a sticker that pretty much sums me up in the most succinct and accurate way possible – Warning: May Contain Infantile Humor. Aaaaand then there’s a current draft of My Life Plan.

B. I like that these pictures are some of the first things I see when I wake up and get out of bed in the morning (besides my alarm). The picture that the arrow points to is one from my freshman year, taken with my brother and the Punch Brothers, a modern bluegrass-jazz-alternative fusion groups and one of my favorite bands of all time. I ended up seeing them three times in three different cities that year.

C. My baby! Just kidding, I’m not that attached. Actually I am. Nooo technology! I hate you but love you so much!

D. One of the neat-o things about Simmons Hall (the dorm I live in) is that every year we have a couple of residential scholars that live with us – usually these are visiting professors/really cool grown-ups. As a part of their “residency,” they put on events at Simmons for the MIT community. Often times these are discussions, performances, or guest lectures. Katharina Ribbeck, who is a residential scholar and is a visiting professor in course 20 (biological engineering), happens to be pals with Mark Bathe, who is a professor in course 20, who happens to have a sister who is a professional sculptor. So while the past residential scholars events have been things like, “Let’s watch the Republican presidential debate and then talk about it!” (side note: these events are actually pretty cool), Katharina’s was “Let’s invite an artist over and OMG arts and crafts time let’s play with clay!” I started out making a cup, and then I decided to be all creative and turn the cup into a tree trunk, but then the trunk ended up looking like a cup with a bunch of tails instead of a trunk with roots, so then I decided to turn it into a volcano, but that didn’t work, so then the next logical manifestation of this progression was obviously an octopus. Behind the octopus cup is another mug that my brother painted for me this summer, among other random desk trinkets.

E. A picture ripped out this article that was featured on the front of the New York Times. It’s funny – while I never disliked watching sports, I wouldn’t have considered myself an avid fan of any sports teams or athletes (with two exceptions – I loved Kurt Warner and Mark McGwire just like every other good Missouri kid in the late 90’s). I’m thinking it was a combination of my little brother’s fanaticism and a weird sense longing for nostalgia after leaving home that suddenly piqued my interest in following sports once I got to college. Or maybe I just enjoy getting a peek at life outside of MIT every now and then. In any case, go Cards! And just for the record – LaRussa and Pujols, I forgive you. Barely.

F. The lighting in Simmons is notoriously crappy. Which is exactly why I have TWO desk lamps.

G. One more downside to Simmons is that since it’s the only dorm on Vassar St. (all the others are on “dorm row,” which runs along the Charles River), half of the rooms get a pretty nice view of campus/Boston, and the other half gets the lovely view of train tracks and the backs of various biotech companies in Cambridge. Guess which view I got? (Hint: not the former)

H. I use a paper planner. I know I’ve mentioned it before, but technology and I have a weird relationship, so I tend to stick to what I know (which is not Google calendar, my iPhone’s calendar, or any other organizational device that is acceptable to use in the 21st century).