in the last month, it simultaneously feels that so much happened, and that nothing at all happened, as it has felt for the past nine months. this is part of the reason why it’s been so hard to write about what’s been going on in my life: it feels like there’s nothing going on. or maybe, more precisely, it feels like the same things are happening over and over again.

since moving in to simmons, i went on a subway trip with alan, which was pretty fun. then it was doing a bunch of final projects. for 21m.600 intro acting i did a scripted paired scene, and then i did a monologue. it came and it passed; it wasn’t really remarkable. i wrote a paper for 24.902 intro syntax about tagalog verbs. then i wrote a paper with two other people for 6.854 advanced algorithms, about online bipartite matching.

and all of a sudden it was finals week. my only two finals were both on thursday, so that meant i had a whole week of nothing, because i wasn’t going to spend a whole week studying. i kinda wished both of my finals were on monday so i could have just taken them and be done with the semester. instead, it was another week of just lying down, rolling around in bed, reading things, lying down on the other side of the room, chatting people every once in a while, doing random puzzles on puzz.link, and picking up celeste for a few minutes before getting bored.

last fall, we cooked finals meals for each other and our grt made care packages and chocolate club served hot chocolate in the middle of lobby 10. this fall’s finals week was just… usual. it was even different from how it was from the earlier part of the semester, because at least then, i felt there was people around.

no. with thanksgiving break, most of the seniors left campus, leaving only two hundred or so people in simmons and next, almost of all of which i didn’t know. with everyone gone, it felt closer to how i felt when i was living in baker last summer. there was me, four corners, eighteen windows, and an urge to investigate every square inch of my bed.

the rhythm of life in simmons is, like i said, much like my life in baker. i take the elevator down to the dining hall to get meals, and then i take it back up and eat in my room. i walk to the z center to get tested every once in a while; it takes around twenty minutes to walk, get tested, and walk back.

the other day a package for me was delivered to east campus, presumably from a friend who didn’t know my new address yet. unlike my situation with baker, i could pick mine up whenever desk was open; all i had to do was drop by. i timed it such that i was able to go to east campus, pick up some medicine from mit medical, and get tested for covid.

without the rhythm of the semester reminding me to get tested on mondays and thursdays, and with the weather getting worse by the day, going out to get tested is harder. but it’s one of the few things that get me out of simmons, and it was nice when i got to do it along with some other errands. that monday, i took the tech shuttle from simmons to the media lab, picked up meds, go tested, and then picked up my package from east campus.

it was the first time in a year that i’ve seen the east campus courtyard covered in snow. i’ve forgotten how beautiful it was. 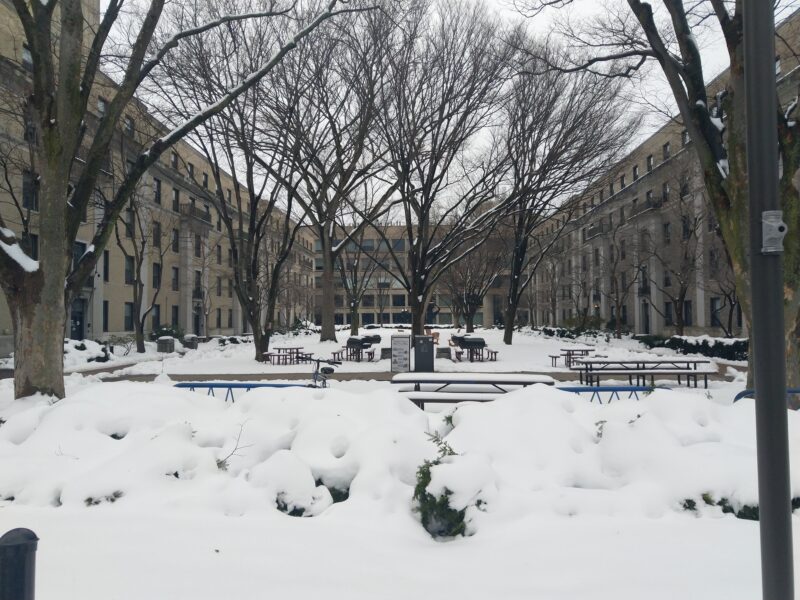 last year, i spent winter break in east campus, alone. this year, i’m spending winter break on campus again, alone. but there are small differences with this year that make me yearn for something, and i’m not quite sure what it is.

maybe it’s just my bedroom in simmons. it’s a double with eighteen windows and two heaters, and having a large room is nice, but it takes a while for the heat to spread. i’ve never had a bedroom this large before, and really, two-thirds of it is empty.

maybe it’s because of the quarantine. having a meal plan sure is convenient, but i do miss how, last year, i could go to the t, take the train downtown, eat good dumplings, and get lost wandering boston’s labyrinth.

maybe it’s feeling like i have less to look forward to. sure, mystery hunt is happening this iap, and being on the writing team means i have a lot to be excited about. but it doesn’t really compared to being the wide-eyed first year who first heard of mit through mystery hunt, getting to participate in it for the first time, with a team competing to win.

heck, scratch that. the difference is the bedroom.

i’m yearning for my bedroom back in east campus. i’m looking for that room too cramped to be a double and with a heater powered by ec’s decades-old iron lungs. the view from the large window was filled with the courtyard, and when it was buried in snow, the sunrise would reflect and fill the room with light.

it’s an odd feeling to be homesick for a place that isn’t home.

is home somewhere in the philippines? when referring to the country, i always say “back home”, as in, “friends back home”, “the situation back home”, “haven’t been back home in two years”.

i’ve stayed in three different places in the philippines, one of which is my permanent address, but none of which i’d call home. i keep in touch with a lot of my friends, and i want to see them again, and i’m sure they’d let me sleep over in a heartbeat. but that’s not home.

is it east campus? on google maps, at least, my “home” is east campus. but i’ve only ever called it “my room”, or “my place”. i’ve only lived in east campus for a total of nine months, only the first five of which had lots of people from floorpi. my memories of hanging out with people in the lounge are the better part of a year away from me now. i don’t miss east campus, i miss the people who lived in it. i don’t miss third west, i miss floorpi.

it’s not simmons, even if i’m living here. it’s not baker. is it “mit”, as a concept? no, that doesn’t make sense either. to me, right now, mit feels little more like a nebulous cloud. we are all marooned in our little bubbles, and mit remotely just isn’t mit.

do i even want a home? what does that even mean, to me, when the only family i lived with was a family i’d rather not have had? maybe i’m just chasing this idea that doesn’t even exist, and maybe no one else has really figured out what home means. the percent of people i know with places that they call home has grown smaller and smaller over time, so maybe home is only something that exists when we are younger, a bond that becomes thinner with time and with distance.

because even harder than that was reckoning with my sleep. this includes willing myself to sleep at four in the morning and staying in bed for sixteen hours straight, the two poles my depression swings between. but it also includes dreams, which are often the subject of my conversations with my therapist.

my psychiatrist says that it could be a side effect of the medicine i’m taking, which i could believe, since i’ve started remembering my dreams more consistently since i’ve started. a lot of them involve my family, which is odd, because i haven’t seen them in two years.

a lot of them start out as kinda normal scenes, with a few incongruous details. i’d be on my laptop in the living room, but the living room is ten times as large with piles of boxes stacked to the ceiling. or it’d be a tennis match with my family watching. once, my dad and i were shopping in the department store, going down these really long escalators, that went all the way from the fifth floor to the basement, and there were six of them side-by-side.

i’d make some sort of slight. i knocked over a box. i lost the match after faulting several times in a row. i got frustrated with the fact that i’m with my dad, because i shouldn’t be, and i blurted out that i just wanted to run away from everything and disappear.

and then my parents would get mad. my parents get angry at me for knocking over a box, despite them knocking over boxes on a daily basis. my mom yells at me for messing up my serves, and blames my inability to play tennis on using the computer eight hours a day. my dad calls emergency services and two social workers restrain me as they try to talk me out.

the dreams used to be so mundane, and back then my doubts were whether my parents really were that bad. bad enough to justify cutting all contact with them, and i’d get guilty for leaving them. now the dreams are so pointed that my feelings have flipped, and the general mood is frustration. of wanting to escape so, so badly. as much as i love everyone i’ve met in mit, some nights, i want to drop out, take a plane to nowhere, and run fast enough that i’d leave my parents’ ghosts behind.

leaving home is easy. finding a new one is harder. keeping it is a struggle.

i’ve been sitting on the idea for this post for six months and just now got to writing it. i think what finally got me to write it was listening to milk. i love cheats, they’re one of my favorite bands, and i’ve listened to milk dozens of times. but something about last week and the magic of spotify’s algorithm drove me to write this now.

the music picks up at this point in the song: but i’m still wide awake. then part of the second stanza is repeated, and then the song ends with the lines i lost my heart / when i kept it from you. i’ve never been able to connect the first half of milk with the second half; despite having the same lyrics, the second half sounds brighter, making it feel different.

what causes this change, then? is it some stunning realization that casts this grieving in a new light? is it frustration at being unable to piece together these feelings? is it just brazen acceptance of the situation?

whatever it is, i hope i get it too.