Read this entry. It will rock you. I promise!

DID YOU KNOW? The longest recorded kiss took place in New York City on December 5, 2001 between Louisa Almedovar and Rich Langley. It lasted 30 hours, 59 minutes and 27 seconds.

Thanks to my beloved high school friend Shana for that bit of information.

Finding myself suddenly and unexpectedly with no other plans for Friday night, I decided to use up the extra day that I had hanging out on my Eurail pass and take a day trip down to Montreux, Switzerland. 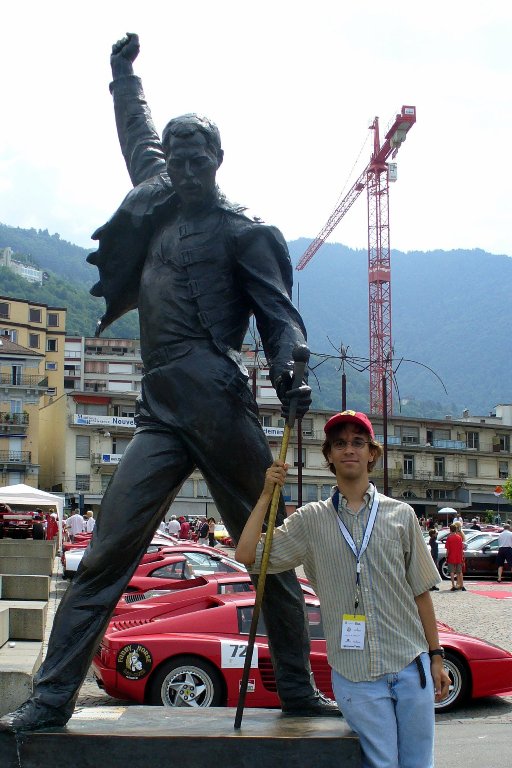 I AM SO HAPPY.

So, upon getting to Europe I knew that what I need to dew was to trek up into the mountains of Switzerland and see the famous statue of Freddie Mercury built in Montreux, the site of Queen’s major recording studio. The statue can be seen on the cover of their final album, Made in Heaven, which I own. I own pretty much all of their albums, even the really terrible ones like News of the World and The Miracle (although “I Want It All” is definitely one of my top 3 Queen songs), having picked them up in high school through a mixture of Christmas presents, local CD stores, and eBay.

Now, I’m not normally in the habit of planning 17-hour solo train journeys to see statues of deceased rock icons. Originally, I had planned to see the statue with Ling ’07 on our train ride back from Barcelona, since we had a layover of a few hours in nearby Geneva. This would have actually been appropriate, of course, since Freddie recorded the solo album Barcelona with opera diva Montserrat Caballe in the late 1980’s. But, alas, our travel plans coming back from Barcelona changed, and with trips for every other weekend this summer already planned, I had all but given up hope of seeing Freddie.

So, with the aforementioned cancellation of my Friday night plans, I set out at 11 PM for a 10-hour train ride from Cologne down to Montreux, by way of Basel and Lausanne. I was hoping to somehow run into Jessie randomly in the train station, since I didn’t have time to alert her to my travels, but I had no such luck there. At 9 AM, after a pleasant conversation with a cyclist from Arizona on the train, I made my way out of the station and into downtown Montreux. I had no idea where the statue actually was, and it wasn’t listed on any of the maps, so I looked at some postcards in a gift shop and figured out that it was apparently on Lake Geneva. So, I headed down to the lake and decided that I would walk one hour in one direction, then turn around and walk two hours in the other direction, and then, if I hadn’t found it, admit defeat and head back home, because I had only three and a half hours in Montreux before I had to get on the last train back home.

Incidentally, I rememeber one of my friends telling me about a 6.004: Computation Structures problem where you had actually had to figure out what the fastest way to find a store was when you know what street it was on but not in which direction, and the answer involved a logarithmic progression of some sort.

Anyway, it didn’t matter because I found the statue after about five minutes of walking. 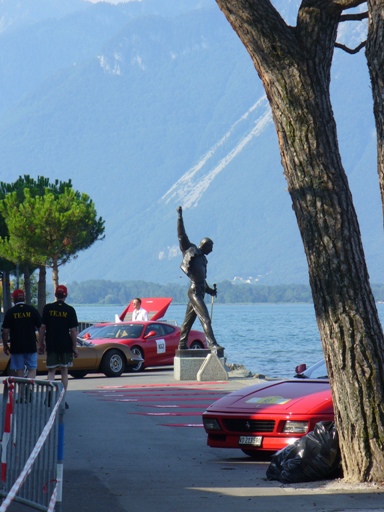 …but this was as close as I could get. Just my luck, I happened to pick the day of the Montreux Grand Prix for my visit, and that somebody decided that they should set up all the nice Italian cars for the Grand Prix within a fifty yard radius of the Freddie Mercury statue and then rope that area off so that nobody could get in except for the teams. So, I planned a 17-hour trip to Switzerland to see a statue and arrived on the one day that the thousand square feet around that statue were inaccessible.

Upon realizing this, I remember saying six words to myself, five of which can’t be printed in this blog. The sixth was “of.”

Now, the rent-a-cops there didn’t seem too imposing, and at that moment I wished that I had been involved in the hacking community in my undergraduate life at MIT. But I’ve heard from some people therein that hacking off-campus, even in Boston, is generally considered pretty difficult, so hacking in Switzerland would probably have been well beyond my abilities anyway. So, lacking that talent, I picked another one out of the MIT skillset: complaining.

I went up to one of the security officials and politely asked, first in German and then in English, if I could just come in for three minutes to see the statue. No. But I came all the way from Cologne just to see it. No. It took ten hours. Here, you can see my train ticket. No. But it’s like 30 meters away, you can watch me the entire time. No, only with a pass. Please, this is the only thing I want to do in Montreux! No. Well, do you know when I can get in to see the statue? No.

I was just a poor boy, and I got no sympathy.

Two hours and three officials later, I had only managed to discover that the cars would leave around 2 PM, but the area wouldn’t be open until 5 PM. Well, that was no good; I didn’t have time to stick around for a night at the opera, or even a day at the races. Worse yet, the town was filling up with stupid tourists who wanted to see the Grand Prix, so security around the area was picking up even more. I needed to find a way to get into this hot space with the cars and see Freddie as soon as possible.

During my two hours of consultation with security, I did see that they let a Grand Prix team member come in with his wife, although his wife didn’t have pass. So, with time running out, I decided to try yet another skill that all MIT students come to possess: begging for help.

I needed to go on (and on and on and on) and see that statue! So, very sneakily, I went out of sight of security and started telling people, in German or English, or both, about my situation and asked if they could save me (figuratively naked and far from home) by letting me in on their pass. I was unsuccessful for 10 minutes, as these people were apparently really protective of their automotive tradition, until finally some Irish guy and his wife approached me and said that they could help out. 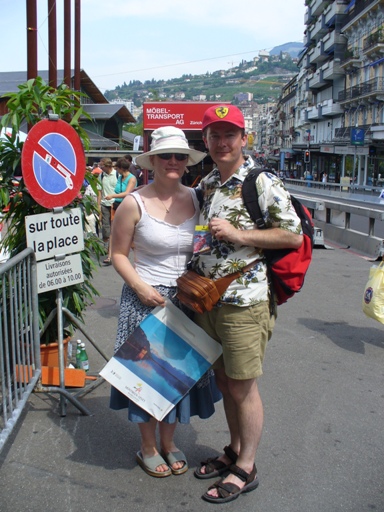 I don’t know who you are, and I never got your name, but if you ever happen to read this, know that you’re my best friend. The Irish guy was sent down by some major newspaper to cover the event, and was almost unbelievably committed to my cause. After a few conspiratorial discussions, I went down with him and his wife to security posing as their son in my best, least-culturally-sensitive Irish accent. No luck! I was denied, along with his wife. But I wasn’t going to crack under pressure. So, with his wife’s blessing, I took his press pass and her Montreux Grand Prix hat, left my bag behind, and went to a different guard. I crossed my fingers and whispered “Don’t stop me now!” to myself as I walked past the guard. A kind of magic occurred, and I got through without a hitch.

Inside, I was so happy that I almost had a sheer heart attack. In my delirium, I even took three pictures of his press pass before I realized that a real member of the press probably wouldn’t do that. So, to keep up my disguise, I took some amateurish pictures of the cars on my way to the statue. 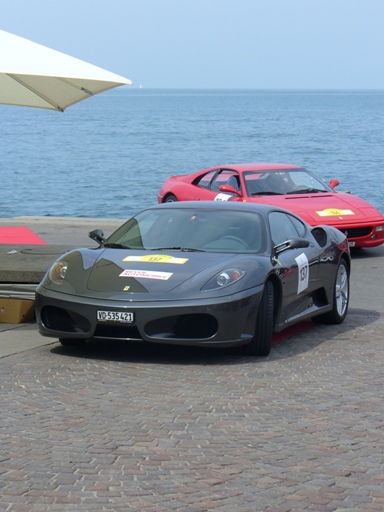 Yeah, whatever. It’s pretty obvious that I’m not in love with my car, or any cars for that matter. I finally gave up on the ruse and just ran down to the statue, where I took 24 pictures, and got some Spanish guy who also spoke a little German to take 5 more pictures of me with the larger-than-life Freddie, including the one above. 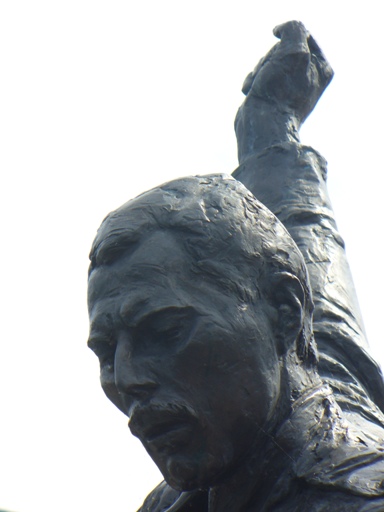 With a flick of the wrist I took this last picture went back up to the patiently waiting Irish guy and probably sounded like a crazy person as I thanked him profusely and told him that he made my dream come true and all that jazz, which I guess was kind of accurate. Then he went off on his merry Irish way and I on my American way. I took this last picture of Lake Geneva, exchanged 3