Adventures in Chinatown by Yan Z. '12

Food and friends and pigeons.

To be honest, my weekend mornings are probably less exciting than yours, especially if you spend them in riveted perusal of my fascinating blog posts. On Friday nights, while the rest of MIT is hard at work pioneering the latest advances in party technology, I’m slowly becoming a connoisseur of next week’s problem sets. The next morning, my esteemed colleagues are calculating the limit of sleep as time approaches 3 PM, and I’m stuck on a deserted island of pre-afternoon hours with nary a soul to bestir.

Well, unless the following calculation appears on the brunchtime horizon.

Dim Sum! If you’re ever mind-numbingly bored enough to pop open a tourist guidebook to Boston, you’ll see this listed as one of the tastier Must-Do’s. So far, dim has been summed roughly every other weekend, and I can assure you that it’s much, much tastier than Paul Revere’s house.

Dim Sum, like problem sets and arguably Communism, works best when done with a large group of people. After a certain degree of collective sleep deprivation, weekend mornings exist only so that dorms, fraternities, independent living groups, and various student organizations can wrangle their members/fake-members-subscribed-to-their-mailing-lists onto a subway trip to Chinatown, where crowded eateries are bunched into corners like figures on scratch paper. Thus, to maximize Dim Sum frequency, one should join as many groups at MIT as humanly possible. By “one”, I mean “you”.

(I confess that I find Chinatown trips to be absolutely magnetizing. Emerging from the florescent subterranean depths of a red line t-stop, Boston warmly greets you with soaring skyscrapers, farmer’s markets, pseudo-Italian street food, and motor vehicles struggling to obey the Heisenberg Uncertainty Principle. A few blocks later, you’re dodging taxis in Chinatown and on the verge of making a purchase that will someday cause your roommate to leave you.)

Last Saturday, I woke up in a not-very-exciting fashion, so I’ll eschew the details and save you a paragraph of reading. To compensate, one of the other bloggers can write an extra paragraph this week if they wish.

Around 11:30, I absorbed a lot of photons on the way from Random to the MIT campus. Thusly energized, I smoothly merged into the excited mob of students collected on the Student Center steps, the reaction site for ATS‘s first Dim Sum run of the year. 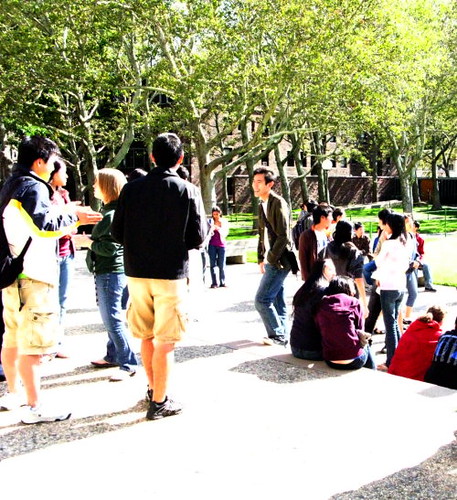 Voila! A few t-stops on the red line and we were on our way to the ambiguously-indicated “Sum Food”. 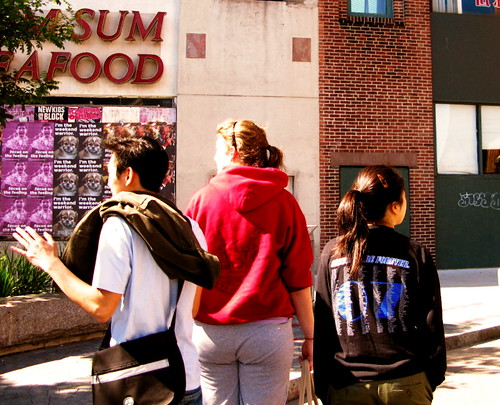 (Entering Chinatown, there were three directions to choose from, which is only a problem when time is linear. I think. Anyway, the upperclassmen shown above picked the right one, so I didn’t need to think long about non-Newtonian physics.) 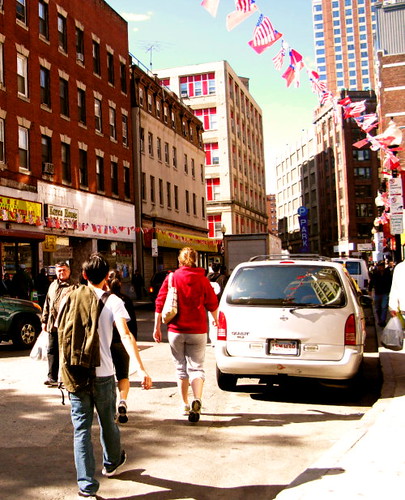 While not as dizzyingly hectic as New York’s, Boston’s Chinatown is a nonetheless a fierce neighborhood to navigate, not to mention one with a pungent cultural identity. By which I mean it’s the sort of place where I would live were I the type of person who writes novels, or raises live chickens in my yard, or writes novels about other people raising live chickens in my yard. I pulled out my camera to get a shot of the vegetable stands and took a elbow in the back from a vegetable-laden pedestrian plowing through the crowds. It’s sort of hilarious that this nearly counted as a work-related injury. 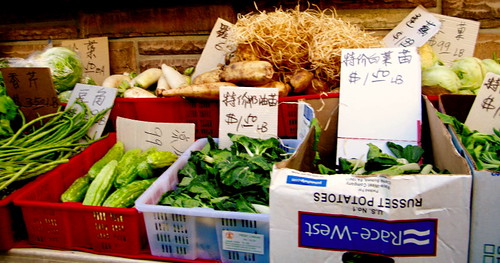 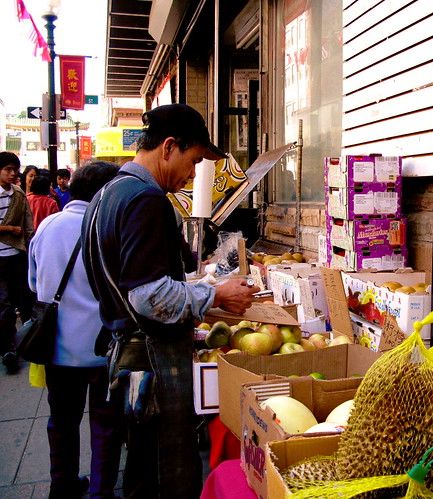 Considering that there were probably at least four dozen people in our mob, ATS decided to scout out the biggest Dim Sum joint in all of Chinatown. Behold, a Dim Sum restaurant with its own marquee (and an anteroom bigger than my floor lounge, and a staircase wider than some residential streets, and another anteroom upstairs, which I guess would make the first anteroom an ante^2-room). 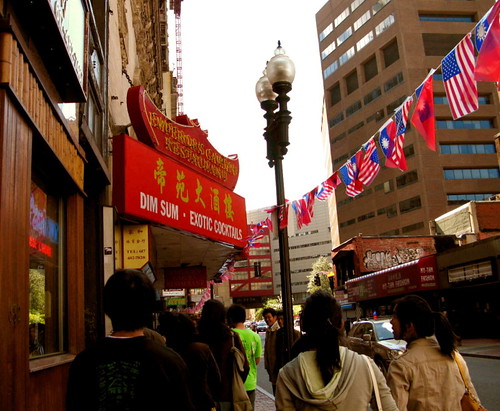 And crowds worthy of a Broadway matinée. I suppose Cats could have been playing in the other dining room, theoretically, but Andrew Lloyd Weber is inferior to dumplings anyway, especially with chili sauce (the dumplings, not Sir Weber). 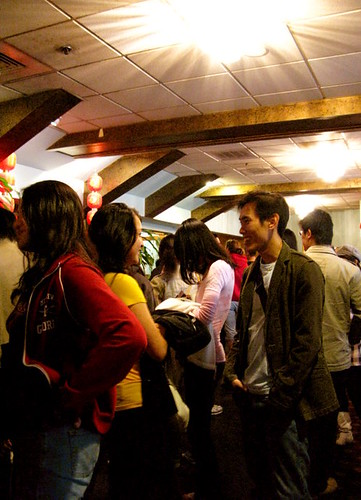 And décor reminiscent of French baroque, complete with etched relief figurines that looked creepily like Leibniz (not pictured, for your mental health and mine). I kid you not, the palatial spread shown below was barely half the restaurant. 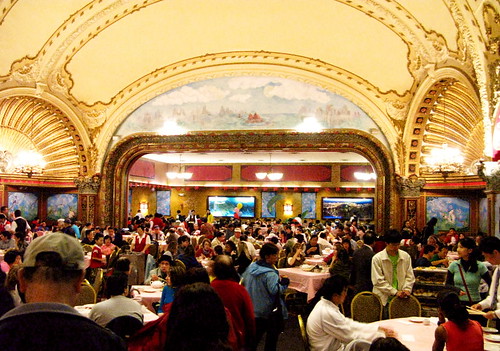 Am I forgetting something? Oh right, food.

Appropriately enough, the lighting was “dim”, so the pictures aren’t exactly going to win me a Pulitzer (not this time, at least. I’ll try again later.) 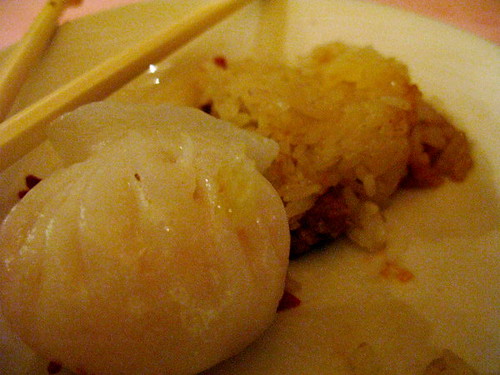 (Shrimp dumplings in a translucent rice-flour skin, backed up by peripheral sticky rice) 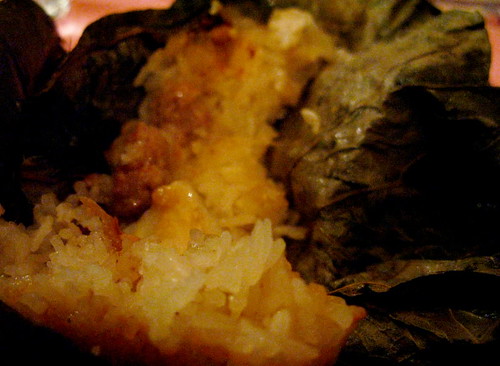 (Zongzi, sticky rice mounds stuffed with chicken, sausage, and other savory fillings, all wrapped in fragrant leaves and steamed) 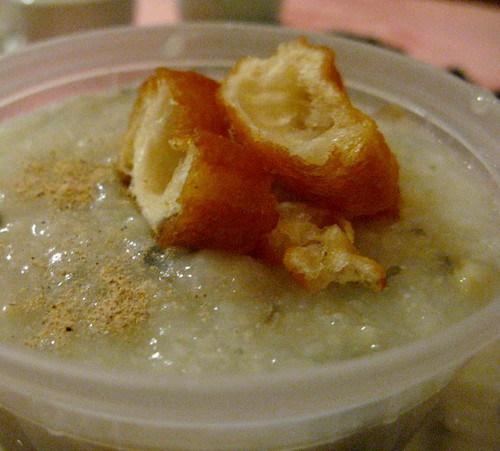 (Congee with preserved egg and Ben ’10. The former was in the murky white depths of the rice porridge, the latter shared it with me and topped it with enough pepper to heat a small house.)

You get the general idea.

I have this theory that the Dim Sum system models the perfect process for optimizing consumer satisfaction. There’s no delay, the dishes are steaming hot, the tables are round so as to maximize socializing capacity, servers bring up a steady parade of rolling carts, and the total charge per person invariably comes up to a single-digit number. In this case, my table was populous enough that I ended up bidding farewell to George Washington only thrice. Thanks, guys! Glad you came! 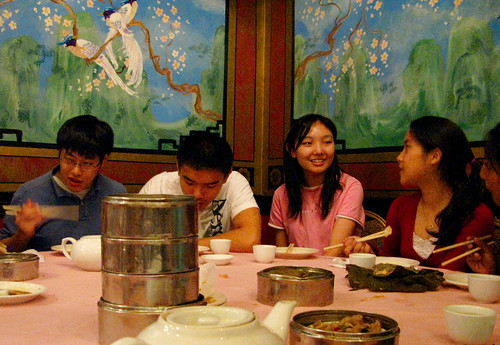 After five weeks in college, I’ve learned that groceries actually have to be purchased once in a while. With money and stuff. In all seriousness, I lived entirely on free food for my first three weeks* at MIT, which in itself was an experience worthy of a Hemingway-esque novella, except with less fish. Fondly do I reminisce on my youthful days, when a night of ravaging two-pound lobsters from the fraternity across the street would be followed by a full day of monastic cold cereal and stashed granola bars. If you have the guts and the stomach and the lack of sound judgment, I urge you to see how long you can live on a Freegan diet (yep, “Freegan” is a real word. I wish I had invented it). You’ll never look at meals the same way again.

(*Some people here have been able to last half a semester without caving in, so I’ve heard. This, however, requires Olympic stamina and a willingness to suffer though innumerable company recruitment dinners.)

But, having shed the blithely pointless whims of pre-semesterhood, I joined Ben on a much-appreciated dive into the Asian grocery mart next door. Produce galore! 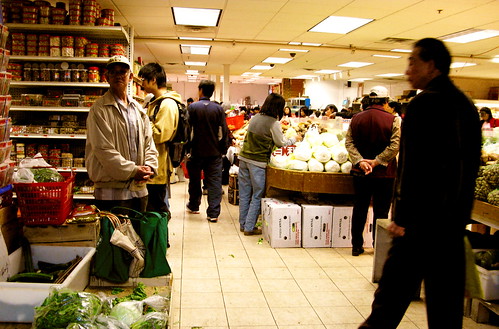 At the sight of fully-stocked shelves dedicated to nothing but frozen buns, I lost all fear of nuclear warfare. 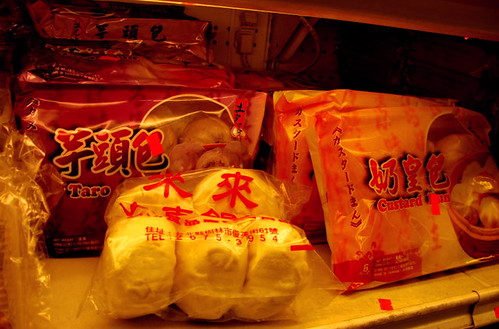 I might have gone slightly overboard, but at least I’ll stay alive, Mom. 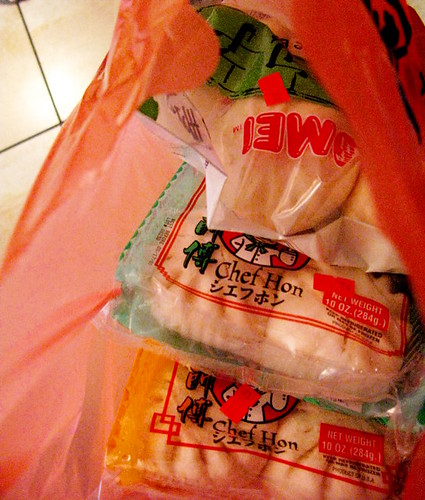 Ben opted for a more sensible variety of sustenance in the form of assorted snack foods. Ben’s parents will be glad too. 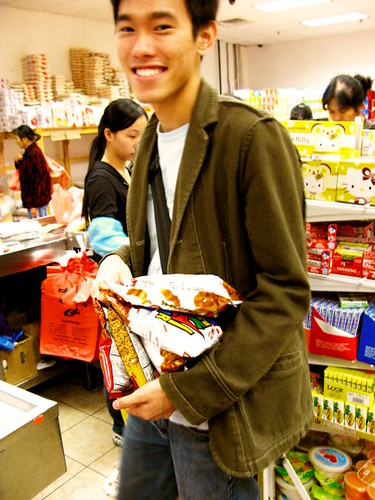 Having fulfilled our nutrition needs for the week, Ben and I headed back into Dim Sum Xanadu, where our cohorts were still feasting away. Adequately stuffed, our friends decided that the logical next step was to buy a lot of pastries. Off to the bakery we went. 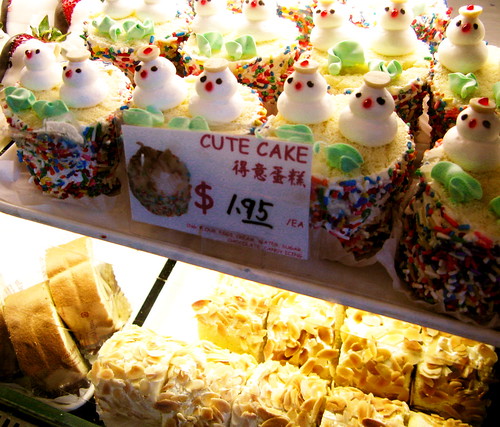 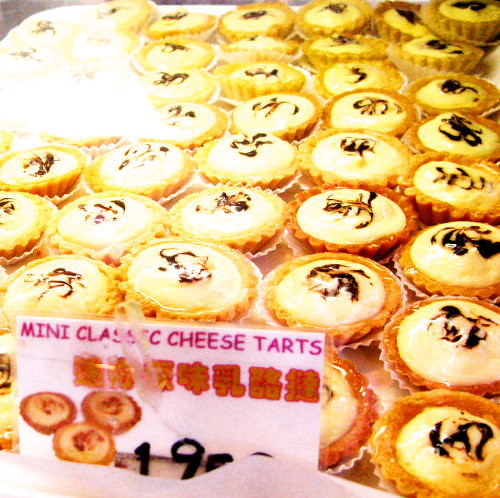 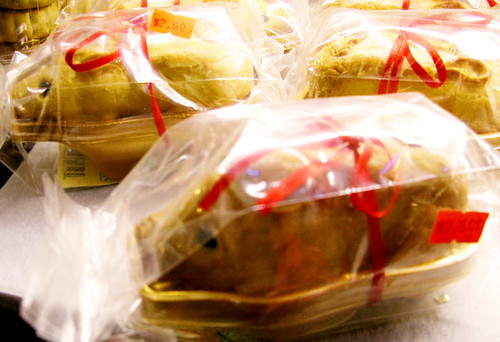 This specimen here was classified as “Thousand Layer Cake”, despite having only 7 identifiable layers. I go to MIT, so I instantly recognized that the labeler had failed by two or three orders of magnitude. Unless the baker had intended to represent a thousand-layer cake with a ridiculously low number of pixels, I’m still unconvinced. 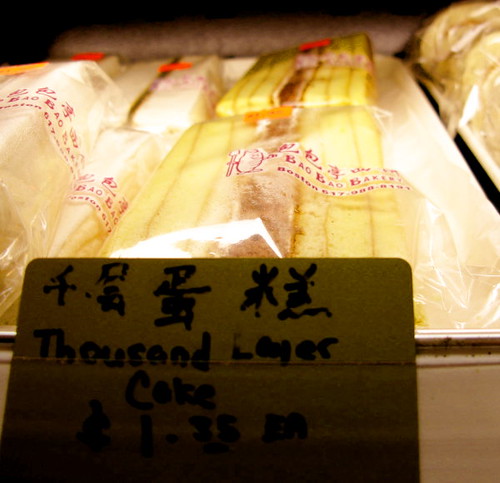 By then, I was ready to call it a day. However, no day was called because we soon found ourselves in a butcher’s shop that also happened to sell refreshingly fruity drinks. 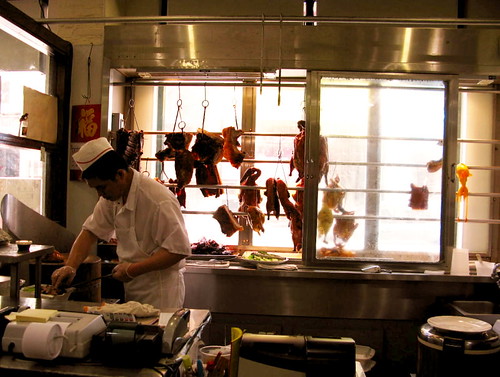 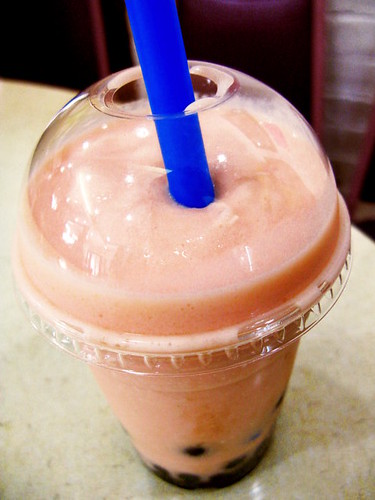 On the way out, I beheld a wonder of creative marketing. The sign is to be read, “Patronize us! You’ll never see another company like this ever again!” 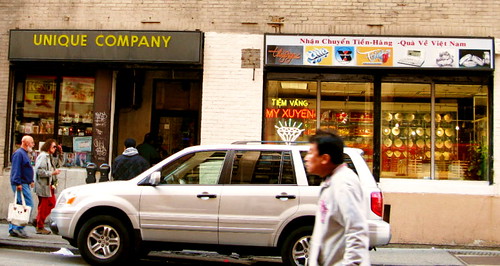 At long last, we withdrew from the deliciously incoherent bowels of Chinatown. Somebody wanted to stop by the drugstore, so Ben and I went along and turned the Halloween costume displays into masterpieces of satire. 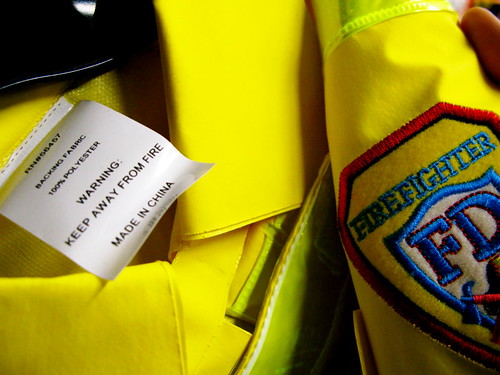 I have no idea what’s going on in the next photo, so let’s just skip over it. 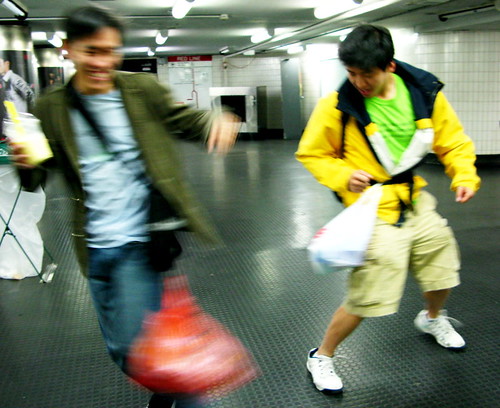 After a long morning that melted into three hours of soft, buttery afternoon leisure, I finally got back to campus, where even pigeons try to semi-rigorously follow mathematical principles.

And this is why I do homework on Friday nights.

24 responses to “Adventures in Chinatown”