Trivia: In Mandarin blogs, being first to comment is to get the “tou xiang” – a phrase that alludes to the traditional “tou xiang,” a Chinese practice that is meant to bring good luck which entails being the first to place a stick of incense in the incense pot at a temple festival. 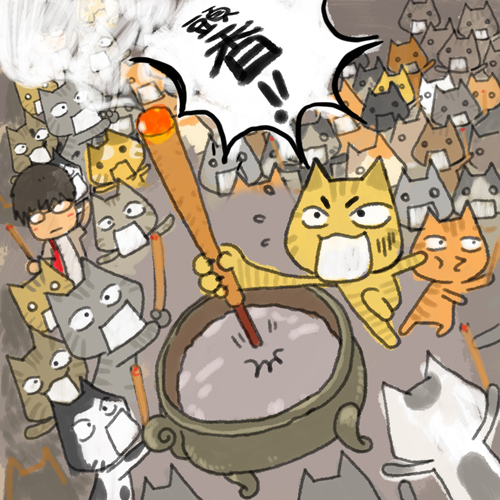 Anywhoo, I’m an Associate Adviser this year to 5 froshies, Jeremy, Orit, Natalie, Kang, and Justin. We had some productive discussions from yesterday and today, and I thought I would post some of the good things that came up. Take them for what you will.

Everyone is lonely in the beginning, whether you want to admit it or not. Some people are struck by it harder than others, while others hardly notice it at all, but either way – it’s normal. It’s merely your body’s natural defense mechanism of coping with being away from home. My only good advice for homesickness is merely this: don’t stay in your dorm room.

At least for me, I tend to get more and more depressed the longer I spend in my dorm room. Thus, I hardly spent any time in my room during the first couple of weeks of college. I found that the more I was up and about, forcing myself to meet new people, and trying new things – the better I adjusted to a new life at college. And my advice for you is precisely that. To echo Paul’s last? blog, turn off Facebook, close your computer, and go meet that new froshie down the hallway. If you’re going for dinner, why not call someone you met at your FPOP, during Orientation, or when you were walking down Dorm Row? As tempting as it is to retreat to your comfort zone, don’t spend all your time messaging your high school friends, calling your parents, or shutting yourself out from all the excitement that’s going on outside of your door.

You have a golden opportunity right now. What better time do you have of making new friends and getting to know new acquaintances when HUNDREDS of froshies are running around, trying to do precisely that? What better time do you have of joining new clubs, exploring new interests, and connecting to a new support network when even MORE upperclassmen are up and about on campus, trying to meet all of you and hear your stories?

That said, you better be at Activities Midway tomorrow. ;)

One junior said to me last year, “If I had P/NR again, I would trade a lot of my As for a lot more steak and lobster dinners during Rush week.”

Pass/No Record is what you make of it. I’m not here to talk to you about using your P/NR “strategically,” as some froshies I’ve met have already done – laying out their weaker GIRs all in the first semester (or, on the other hand, taking a complete killer courseload), while under the safety umbrella of P/NR (which are both not necessarily advisable) – but rather about your perspective of looking at P/NR.

I was speaking with a faculty member (who also served as a frosh adviser) earlier this year. He related to me an individual who got straight A+’s his first semester at MIT, but added, “but he did nothing but study.”

That is NOT what P/NR is for!

P/NR is there to smooth out your transition to MIT’s rigorous courseload – to allow you to explore what MIT has to offer while not compromising your coursework. You’re probably used to being a straight A student; you’ve probably turned your friends down on an offer to party because you had to study.

I’m here to advocate that you forget about that the first semester.* (see disclaimer!!)

Trust me, you won’t be as inclined to do those things when you’re on ABCDF grades.

BUT, like all things that come free in America, this isn’t without a disclaimer, which you should read carefully, in addition to the above.

* DISCLAIMER: Despite my bold statement at the top, academic focus is still important. Unless you are *really* sure of what you’re doing, DO NOT skip multiple lectures or neglect to turn in psets. MIT courses are very different in the sense of high school courses that, in many cases, you cannot do well by not going to lecture or not turning in psets. Some lectures even take attendance (cough8.01cough). At any rate, you’re still in college to study – first semester frosh year or not – and don’t make the mistake of froshies that partied too hard first semester and ended up having to repeat half of their first semester GIRs again their second semester of frosh year. (trust me, this happens – but it’s the unfortunate other extreme of P/NR)

A good indicator is thus – if you’re in A/B range consistently for psets and exams, you’re probably fine, but if you’re in C/D range, you really need to spend some extra time in your dorm room, hitting the books.

I guess what I’m trying to say is that getting all As is not of paramount importance first semester. Strike your own balance between work and play, and hey – when can you walk away with a C but get the same grade on the transcript as someone who had an A? (you know that EVEN on your internal transcript on WEBSIS, a P is a P…=p)

Pretty short here. But I would say that if you really want to do something – join early. Most clubs have a mailing list which is used to send out notifications for meetings, practices….etc., so getting on the lists that you are interested in is a good first step. At any rate, joining an extracurricular when everyone else is new and trying to do the same is much easier than trying to do the same in the middle of the year, when a lot more things are established.

On “How do I plan my schedule so I can graduate MIT with 2 double majors and 2 double minors?!”

One phrase. Too early.

Don’t get me wrong, but there’s really plenty of time to think about your majors and minors after you’ve experienced more of MIT. As I’m sure many students who are more senior than me can attest, some upperclassmen are still switching their majors! MIT is cool in the sense that the courses here are so different from what you’re used to, and you would probably find your interests shift in and out as you take more courses and talk to more people, so I would suggest don’t take too much of your time just yet planning out the next 4 years of your life already. ;)

1. CI-Hs won’t kill you. And yes, you have to take them to fulfill the Communication Requirement. No, you can’t bribe MIT.
2. Taking a CI-HW class doesn’t mean you’re dumb. Really!
3. If you didn’t do the HASS-D lottery, or if you didn’t get what you wanted in the HASS-D lottery – don’t worry! Just show up with an Add/Drop form on the first session of your HASS-D class and ask the professor if you could still join the class.
4. You HAVE to take a CI-H HASS during your first semester if you are at all thinking of Early Sophomore Standing.

Soon, Orientation would end and Rush would begin. To give you a brief picture of Rush – all two dozen+ fraternities (if you’re a girl – six sororities in Recruitment) would be pretty much be all vying for your attention. Through the course of one week, there would be free food galore, free iPods given out, and free jaunts to the beach, rafting, paintball, go kart…etc. etc. Upperclassmen whom you barely knew a few days ago would be calling you on your cell phone, taking you around in their car, and introducing you to other brothers at house parties.

My biggest advice for you: don’t be afraid to explore in the beginning.

Since Rush is often an aggressive process, many fraternities would be trying to get your attention – and fast. You might be overwhelmed at all the attention you’re suddenly getting from Mu Mu Mu, for example, but I would encourage you to go around to different ones in at least the first two or three days and just check out some other options before settling down to a single one and going exclusively to their events (called “rushing”). After all, deep relationships form within fraternities, and you probably don’t want your choice to be a hasty choice. You would probably feel better after you’ve compared a few and made sure that the fraternity that you’re rushing (basically, trying to get a “bid” from them – which is an invitation to join the fraternity) is the one you truly want.