Fast ride in a short machine

At approximately 11:20 pm on Tuesday night, Charles stepped on the pedal and accelerated the motorized shopping cart from 0 to (approx.) 25 mph in the gaspingly brief time required to scream barely the first two syllables of your preferred interjection/expletive pairing. My stomach recoiled along a vector perpendicular to Massachusetts Avenue as I gripped the plastic-shelled handlebar (?) at the cart-pusher end of the grocery cart and vociferously spewed a sonic soup of bloodless terror and regret for not having purchased better life insurance into the humid, unsympathetic night. Two graveyard-shift workers of indescript employment stood leaning against the back doorway of a warehouse in a cigarette-break tableau, arms crossed, watching us in the uncanny manner that someone watches lemmings gleefully leaping to their deaths on YouTube. I shift forward and let the streetlights ricochet like bullets through the thick thrill of naked velocity. It’s dark and the asphalt is a gooey chocolatey blur underneath. I pay little attention to this because I am certain that a bone-crushing death is sitting somewhere with me in the toddler basket of a supermarket shopping cart that Charles has hacked into a battery-powered road vehicle capable of speeding along four-lane traffic at 35 mph.

We’re in the middle of a less-than-silky ribbon of deserted street outside the parking lot of MITERS headquarters. Charles is driving, which leaves me to enjoy the LOLriocart‘s G-force simulations backwards in a seat designed for children of weight 15-35 lbs.

I am fully aware that the shopping cart in whose toddler-basket I am dearly clutching to my remaining threads of life has been spotlighted in about a bajillion techno-fanatic blogs in the past three days. To anyone with the mildest glimmer of engineering-lust, the LOLriocart will induce prolific and involuntary drooling. Charles claims that the design is still in progress, but it’s already beautiful in the same way that Gmail was beautiful when it was unveiled. Glowing blue lights, check. Ignition-like turn-on mechanism, check. Steering wheel, check. Ability to make R2D2 whirring noises and generate smoke by friction of wheels against concrete, check. Brakes? Um, it looks like those had evaporated.

Hence I am also nail-bitingly aware that the LOLriocart’s current method of not-going-at-25-mph-anymore requires performance of “the s-shaped thing that planes do.”

Grocery shopping will never be the same again. 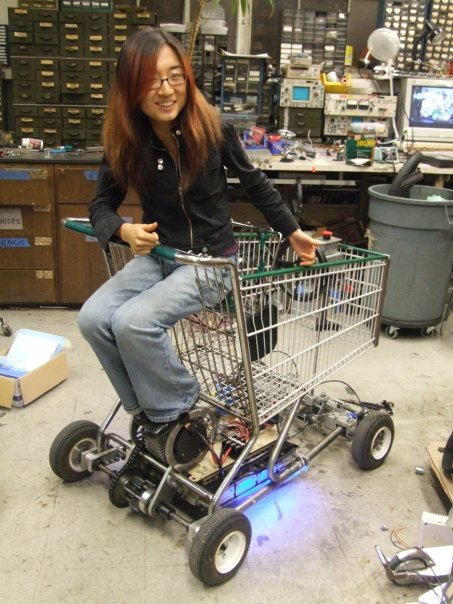 (Photo and survival of the author both courtesy of Charles Guan.)