American culture at its finest: Thanksgiving by Laura N. '09

How my family celebrates the holiday. Plus a crash course in U.S. culture for internationals.

The fourth Thursday of November and the few days before and after are typically the biggest travel days in the U.S. Why? Because that day (today!) is Thanksgiving day, which is a BIG DEAL in the U.S. Considering the size of our international audience, I thought I might take a few minutes to explain why.

Thanksgiving is when Americans gather together with their families to take part in a few time-honored traditions: huge, home cooked meals centered around a turkey, football (the American kind, not actually played with your feet), and preparation for the holiday season.

I just watched the Macy’s Thanksgiving Day Parade, another staple of the holiday. Apparently (according to Wikipedia, anyway) the parade began back in the 20s because a large number of Macy’s employees were new immigrants who were eager to embrace American traditions. (You learn something new every day.) Macy’s is a huge department store, the main branch of which is located on 34th street in New York City. (Hence the movie title.) In fact, I just passed Macy’s on Tuesday night- the bus I take drops me off at Penn Station, right across the street from the famous store. So back in the 20s, a bunch of Macy’s employees put together a big parade with balloons, floats, and animals from the Central Park Petting Zoo, and a great American tradition was born. Ever since its first incarnation, the parade ends with the entrance of Santa Claus- the official ringing in of the holiday season. (In fact, before Thanksgiving was officially encoded as the 4th Thursday in November, presidents during lean times attempted to move the holiday earlier in the year to increase the length of the shopping season. I really need to read less Wikipedia.)

At my house, Thanksgiving morning is pretty lax. While delicious cooking happens in the kitchen, the TV in the living room is left on channel 4 (NBC) which broadcasts the parade every year. My mom and/or sister and I take breaks from preparing some food to bring to my grandparents’ house to catch snippets of the parade on TV. We never sit down and watch the whole thing, but everyone makes sure to catch the very end, when Santa makes his appearance.

But before the climactic end, the parade features marching bands from across the country, floats with famous performers singing and dancing to holiday tunes, and huge balloons of characters from all arenas of pop culture: books (the Cat in the Hat, Clifford the Big Red Dog), TV shows (Kermit the frog), movies (Buzz Lightyear), toys (Mr. Potato Head), and even commercials (the Energizer Bunny, the M&Ms characters.) And a fun fact: apparently, engineering students from Stevens Institute of Technology in Hoboken, NJ volunteer at the parade by inflating the balloons and using their physics knowledge to train the handlers in keeping the balloons under control. I almost went there, and I never knew that!

After my family enjoys the parade, we head to my grandparents’ house with as many of my mom’s sibilings as can make it (my mom’s sisters both live nearby, but her 2 brothers live out of state and only make it back to Jersey every couple of years for important family events) for a traditional dinner: turkey, mashed potatoes, cranberry sauce, pumpkin pie, and all sorts of other autumn foods. Not only that, but my grandmother actually works in a bakery, so the pies and cookies are always top-notch (and in oversupply, normally).

My extended family is huge, so we almost never have a formal sit-down dinner like you see on TV. All sorts of food is set out and everyone grabs what they want and finds a place around the house to sit down and enjoy. As for the football: the TV in the background is set to the football game, and after we’ve digested a bit, we head outside for a family match. A few years ago, when we had a larger crowd than usual thanks to my uncle and his family flying in from Utah, my mom actually borrowed pinnies from the basketball team she coaches so we could have proper teams. It can get pretty intense. 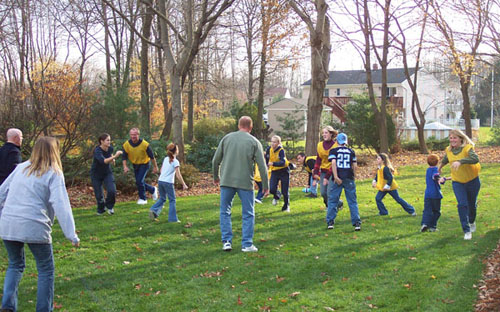 This is my family playing football a few Thanksgivings ago. We pick teams after dinner, and the winners take pride in rubbing victory in the face of the losing team for an entire year. I’m not kidding. It’s a big deal.

The story behind the first Thanksgiving goes as follows: the pilgrims who landed in Massachusetts had no idea what they were doing. They were totally unprepared for New England winters and certainly wouldn’t have made it through the first few years without the help of the Native Americans in the area who taught them how to fish and hunt local game, which crops to plant, and generally how to survive on the terrain. To express their thanks, the pilgrims and the Native Americans held a big feast together to celebrate a successful harvest.

But every story has two sides. If it seems a little bogus to you that one of the biggest, most culturally important holidays in the U.S. celebrates the help of an indigenous population which we’ve historically, to put it mildly, treated very poorly, you’re not alone. The United American Indians of New England agree with you, and since 1970 they’ve staged a protest on Thanksgiving Day (called the National Day of Mourning) in Plymouth, Massachusetts- the site of the original Thanksgiving to protest the “myth” of the First Thanksgiving (because we all know the story wasn’t that simple, and the way we celebrate the holiday now almost certainly bears very little resemblance to the original) and the even bigger myth of cooperation between the natives and the settlers.

I think that’s a pretty comprehensive overview of the holiday. Enjoy your turkey, your protests, or your ordinary autumn day- whatever is in store for you.

29 responses to “American culture at its finest: Thanksgiving”