Now that it’s been almost three months since I graduated, I figure it’s about time to blog about it. Turns out I’m just as bad as blogging things on time as I always have been. Sorry about that.

So. I graduated. And took lots and lots of pictures for your enjoyment.

I woke up super early so I could stand around the track in the athletic center for several hours for no apparent reason. Hopefully my blurry photo does something to capture the huge number of people milling around in caps and gowns. 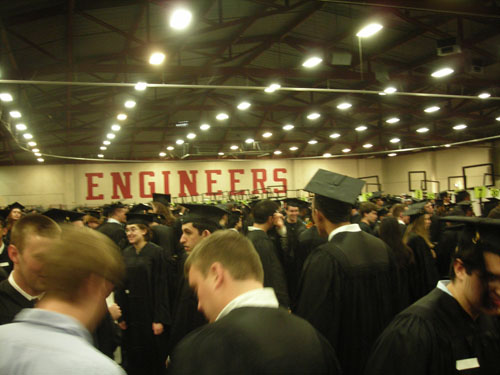 I originally thought that we needed to report extra early so that we could have the details of the day explained to us. No such luck. We checked in at a pre-determined station and then just stood around, chatting with friends for a few hours before starting the procession. Throughout the procession were people with clipboards who checked and re-checked that we had all stayed in the right order. Not a single thing was ever explained to us- people just directed us around and we went along with it. It all went perfectly smoothly, but it was pretty frustrating being left totally in the dark. It also seemed unnecessarily complicated- everyone was confused when station 17 left the gym first. I mean, why not just re-number station 17 as station 1, if they’re going to be first? As I was wondering about this, and discussing the stupidity of it with my classmates, I realized why no one explained anything to us. It was exactly because we’d start having this conversation- organizing MIT students is nearly impossible, because no matter what you do, someone else thinks they can do it a more efficient way and tries to change it in the middle. (Trust me, I lived through a few painful examples.) As annoying as it was, I have to give props to whoever organizes the whole thing for the wise insight to not explain any more than was absolutely necessary to the graduates.

We walked out onto the astroturf, down Dorm Row, and towards Killian Court. I took a photo of my Brass Rat- it was the last time I’d be wearing it “beaver down.” 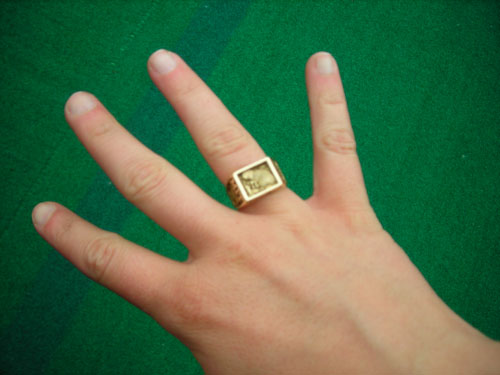 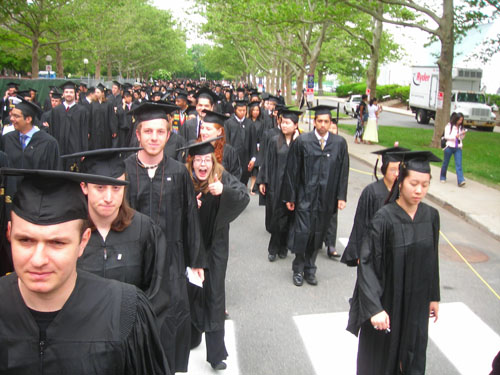 Kelly ’09 is giving an excited thumbs up. She’s quite the character. I had to look at my photos carefully to make sure I didn’t include any where she was making a rude gesture. =)

Then came an unbelievably cool moment that I think will stay with me for a really long time. We walked through the tent and out onto Killian Court and an awesome view of the Great Dome to the soundtrack of Pomp and Circumstance. It’s not something to be described so much as experienced, but it was sort of the exact moment when you realize “Oh my God, I’m about to graduate from MIT. That’s AWESOME.” It’s like the complementary bookmark to the equally memorable moment of opening your acceptance letter and realizing, “Oh my God, I’m about to go to MIT. That’s AWESOME.” (Believe it or not, back in the day, we used to get our decision letters in the mail. I’m a dinosaur, I know.) 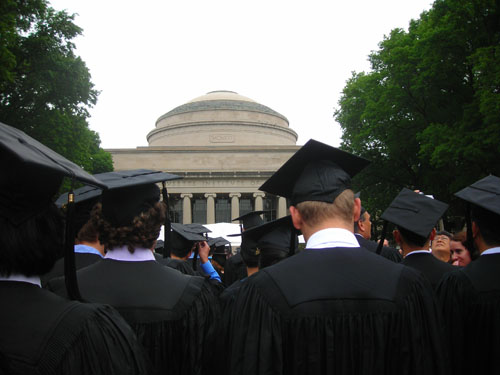 We took our seats and waited for all 1500 of us to file into Killian. 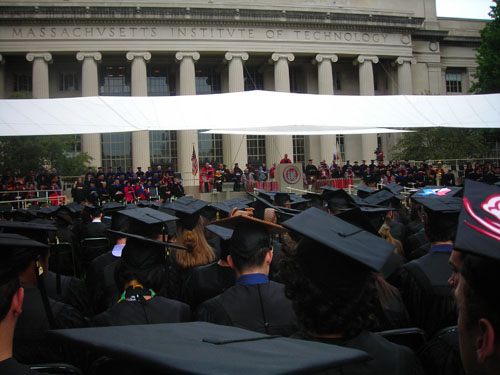 Then Deval Patrick, the governor of Massachusetts, made a speech. No offense, but it was pretty boring. (It was also almost exactly the same as every other graduation speech he’s made in the past 2 years. It was leaked to us in a joke flyer that was handed out before the ceremony, advising us to look out for certain keywords and stories that were sure to make an appearance.) It’s only been a couple of months, but I don’t remember a single thing he said except, “I know none of you are going to remember anything I say today.” Boring speaker or not, I guess that makes him pretty smart. 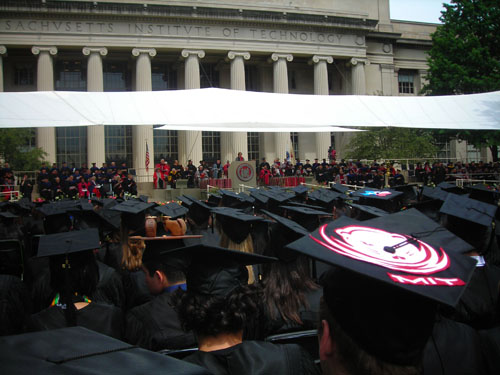 Then Susan Hockfield got up and made another speech. I don’t even remember if it was boring or not. I hope none of this sounds too disrespectful, but really, most of us were too excited to really pay attention to anything. We were too busy talking to our friends and throwing beach balls around and waiting for the moment when…

…we got to turn our rings around. There’s a tradition surrounding the Brass Rat (MIT’s class ring). Students get their rings at the end of sophomore year, and wear them with the beaver facing towards them. Once they graduate and become alumni, they wear the ring the opposite way, with the beaver facing outwards. (There are also traditional colorful explanations about why the beaver “sits” on the student until graduation, but I leave that as an exercise for the reader.) Turning your brass rat around at commencement is a milestone everyone looks forward to, almost from the moment they first slip the ring on their finger. 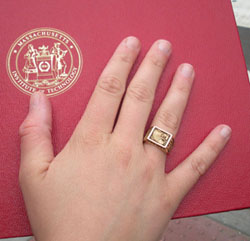 And while it was pretty exciting, it was immediately followed by hundreds of exclamations of “it looks so weird that way!” After that it wasn’t long before… 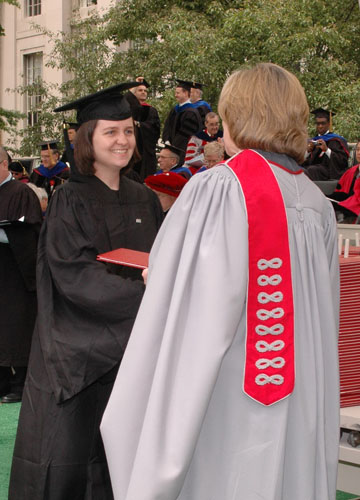 I shook hands with President Hockfield and claimed my diploma. This is really the moment I looked forward to. It was like a final, triumphant gesture saying, “Aha! MIT, you were a worthy adversary! But despite your sleepless nights and insanely hard problem sets, I have conquered you!” And then I put my fists on my hips in a superhero pose. But not really.

I was near the beginning of the ceremony (Degrees are awarded alphabetically by school, numerically by course, alphabetically by last name, and alternating graduate and undergraduate. Don’t worry, it’s nearly impossible to understand, even when you’re standing there counting down the names until they call you.) so after getting my diploma I got to spend a lot of time sitting around while everyone else got their diplomas. I started reading the book I had snuck in with me.

Finally, the ceremony was over and we got to start the fun of taking a million pictures. I normally hate getting my picture taken (ask me about prom sometime, ugh) but this was actually kind of fun. 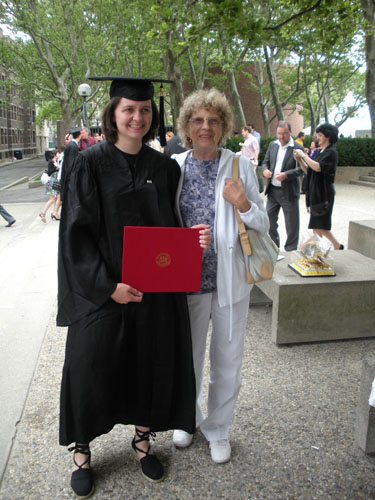 My grandma made the trip up to watch me graduate. 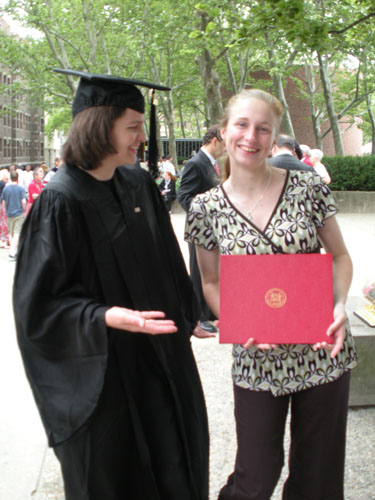 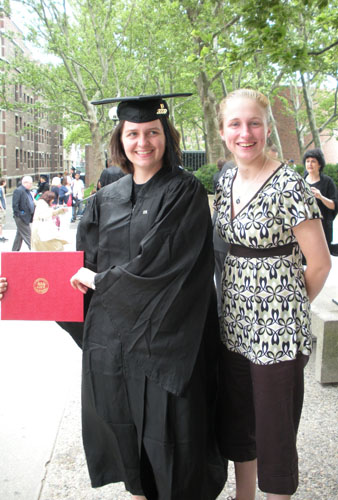 …so I had to steal it back and protect it from her. (My sister is 18, my parents and I just dropped her off at her freshman dorm about a week ago.) 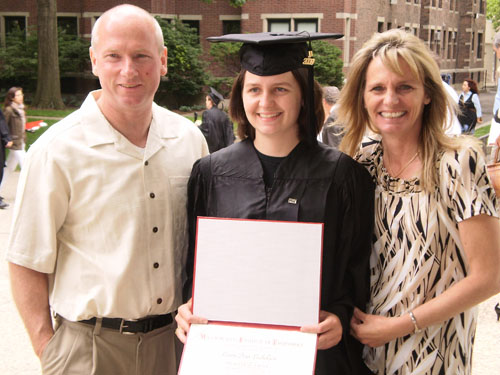 Me and my parents. 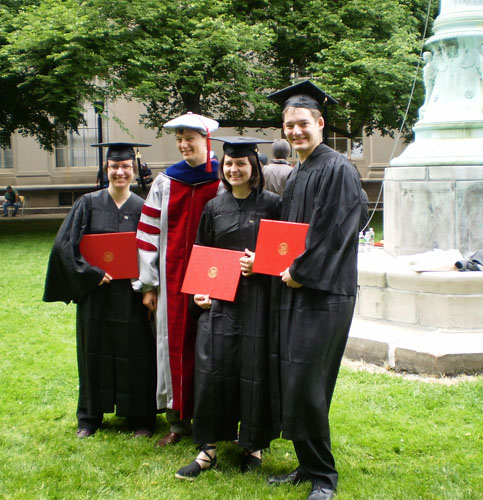 And of course, the Conner 2 delegation! Our old GRT, Chris, was supposed to graduate two years ago but had a lot of technical hangups that needed to get cleared up first. So he moved to DC with his wife while he ironed out the kinks, and then came back to graduate with Adelaide, Rick and I, which we were very excited about. So of course we had a Conner 2 reunion (Chris and I had both left the floor, technically, although I hadn’t gone very far).

By the way, I know it may look as if I’m dressed nicely underneath my gown, but looks can be deceiving. I knew that to survive the hours-long ceremony I would need my cell phone, my camera, a book, and some snacks. I also knew they wouldn’t allow us to carry bags into the ceremony, which left only one attire choice: cargo pants. So I found an appropriate black t-shirt that would blend in with the collar of my gown and my cargo pants with the biggest pockets. Then I rolled the pants up so they wouldn’t show beneath the hem of my gown, and put on some nice but comfortable shoes (which I bought in Madrid for 6 euros- believe or not, those shoes are a huge fashion trend in Spain) and figured no one would know the difference. 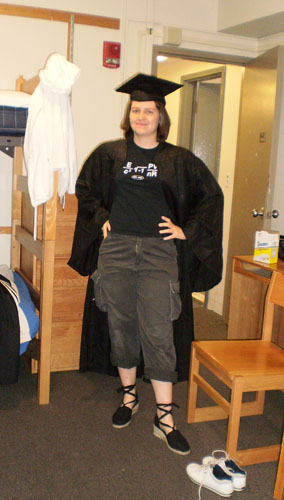 Well, my mom made fun of me, but I think it just represents the MIT ingenuity that will serve me for years to come.

After the Conner 2 reunion, I ventured over to the first aid tent to say hi to the EMTs. This might have been the most fun part of my day. I haven’t been involved in the organization for the past year, but I really love all the people in the group and missed them a lot, so it was great to see them on commencement day. 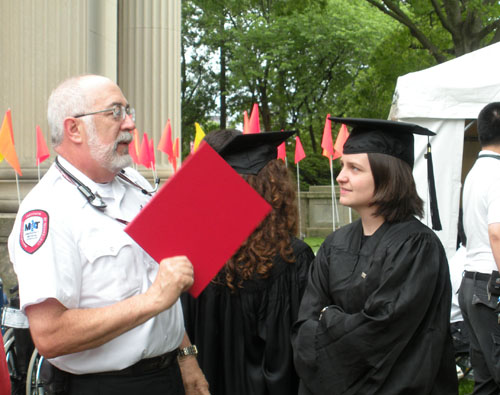 I listened intently while our supervisor, Mark, brandished my own diploma at me while dispensing life advice. Mark is great.

Like I said, there were a lot of pictures. My sister just wouldn’t stop snapping her camera. There are actually quite a few photos of the back of my head walking in front of her, on the phone coordinating the Conner 2 reunion, and waving sarcastically to my sister as she took a picture of me talking with my friends. 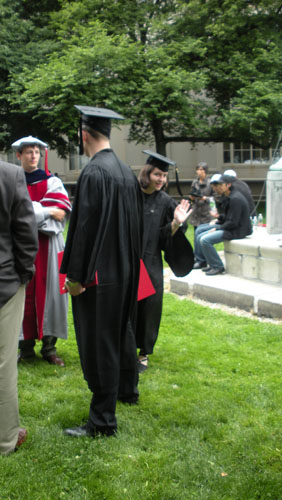 But mostly, there are lots of pictures showing just how excited I was. 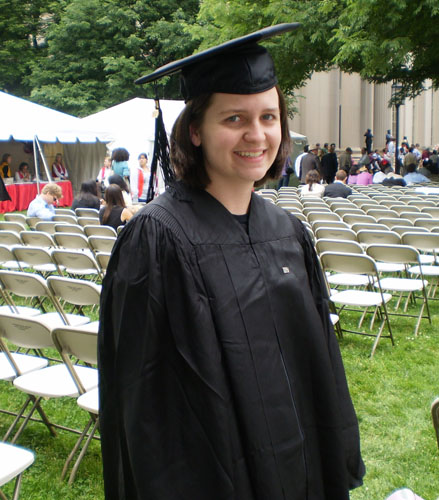 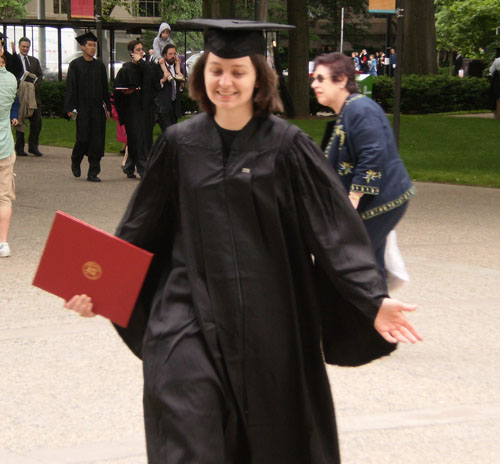 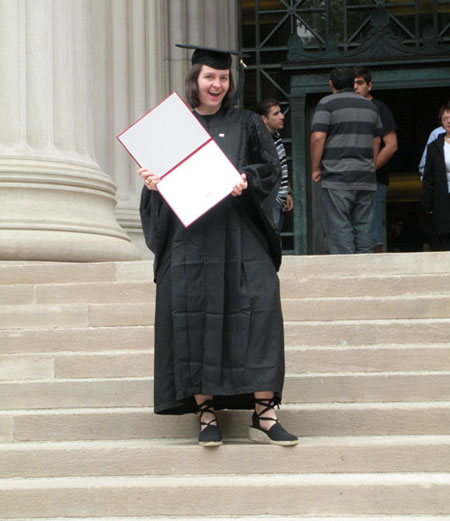 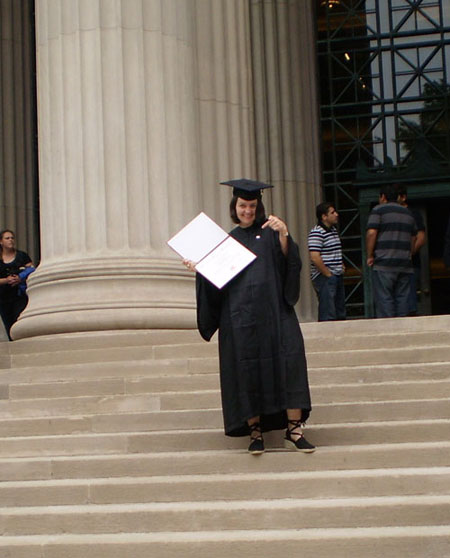 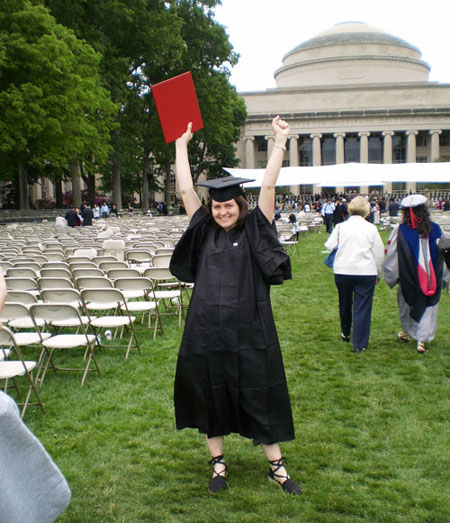 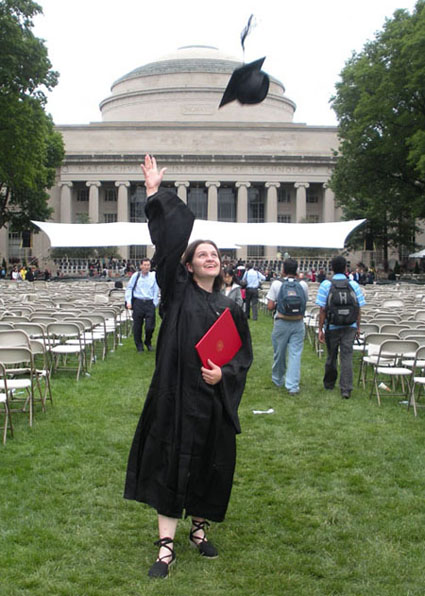 After all of that we headed back to the dorm for a few hours. Then Sarah, Adelaide and I went out to dinner with all our families. (It was a pretty enormous group for only 3 graduates.) The next day we packed my dad’s pickup truck to the brim with all my stuff and headed back to New Jersey.

And now? Well, now I’m hanging out at home, searching for a job, and working at the awesome summer job I had before I ever left home for MIT. That’s right, I graduated from MIT and promptly got a job as a lifeguard at a waterpark.

The sky’s the limit when you’re an MIT engineer. =)